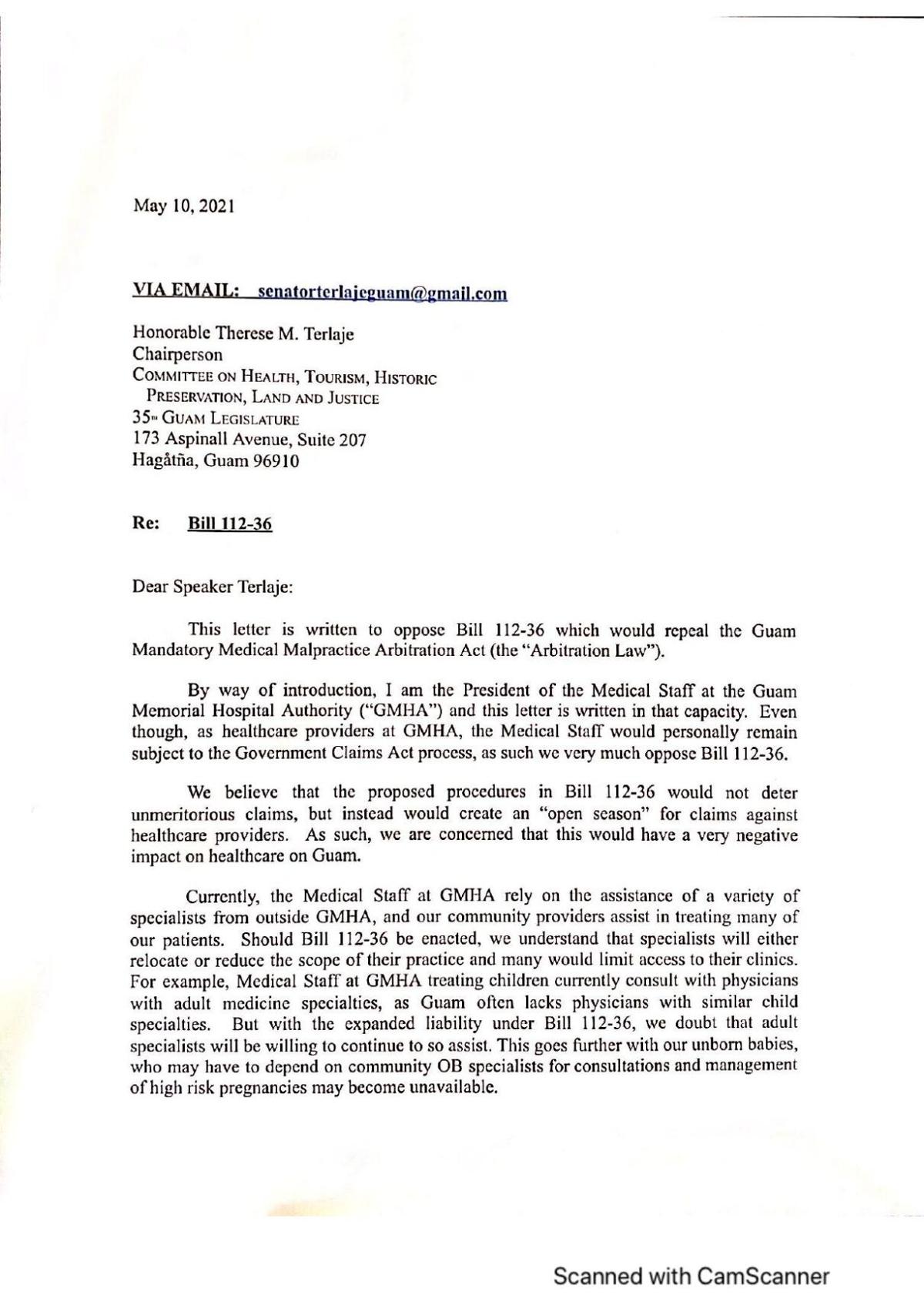 Dr. Dustin Prins, president of medical staff at GMHA, wrote to Speaker Therese Terlaje, a main sponsor to the Pre-Trial Screening Act, urging her not to repeal the arbitration law because the medical staff believed it would lead to increased demand on GMH and a reduction in the number of specialists on Guam.

Similar arguments about a reduction in the number of physicians on Guam – should the arbitration law be repealed – were presented during the 35th Guam Legislature, when lawmakers were beginning to discuss the arbitration law, its impacts and potential changes.

Opponents of the current law say mandatory arbitration locks judicial access behind the costly out-of-court procedure, which may discourage claimants from moving forward with their cases.

Under the proposed replacement, the Pre-Trial Screening Act, or Bill 112-36, medical malpractice claims either at the Superior Court of Guam or the District Court of Guam are to go through a pretrial screening procedure.

The case will initially be sealed and referred to a magistrate judge.

If the judge finds appropriate care was not applied and that the conduct alleged was a factor in causing damages to the claimant, the judge will then set a monetary settlement value on the claim. This opinion will be sealed for 30 days, but the court can order the opinion sealed temporarily or permanently upon agreement by the parties "if a trial is not pursued."

Within the 30 days, either party can pursue trial in court. The parties can, any time within this process, request that proceedings be placed on hold while they enter mediation or arbitration.

Government of Guam agencies, including GMHA, would still fall under the Government Claims Act even if Bill 112 becomes law.

However, according to Prins, GMHA relies on a variety of specialists outside the hospital and GMHA medical staff believe that specialists will either relocate or reduce the scope of their practice and limit access to their clinics should the Pre-Trial Screening Act become law.

"For example, medical staff at GMHA treating children currently consult with physicians with adult medicine specialties, as Guam often lacks physicians with similar child specialties. But with the expanded liability under Bill 112-36, we doubt that adult specialists will be willing to continue to assist. This goes further with our unborn babies, who may have to depend on community OB specialists for consultations and management of high-risk pregnancies may become unavailable," Prins said.

The GMHA medical staff president also said the staff members believe Bill 112 would not deter frivolous claims against health care providers, but would "create an 'open season' for claims." However, he did not elaborate on that statement.

It's unclear if the speaker has received additional statements on Bill 112, either sharing similar concerns or expressing support for the proposal. A request to her office asking if additional testimony or letters were received and for copies of such letters was not answered by press time.