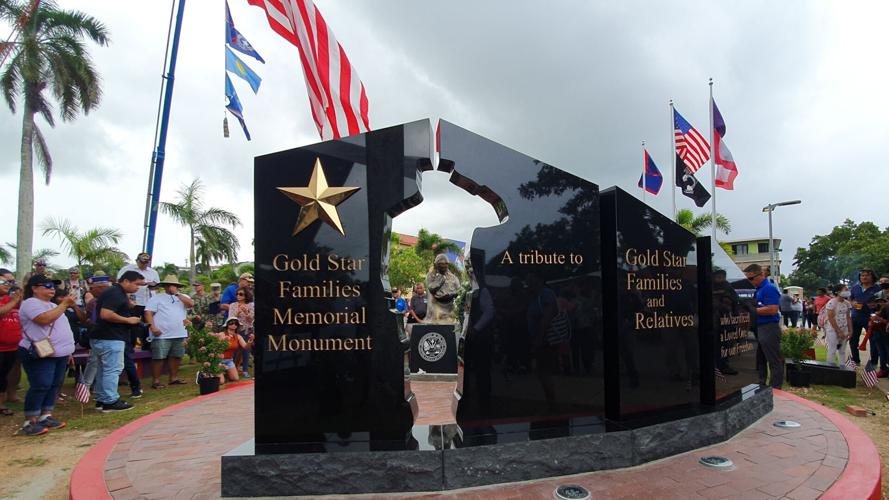 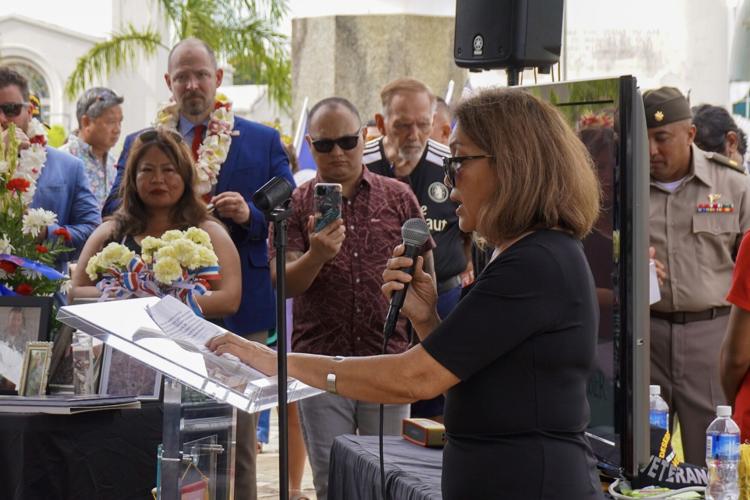 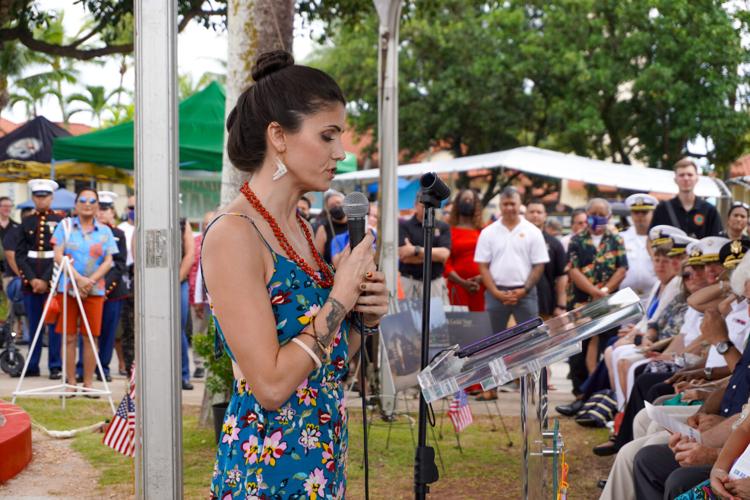 Before all the flair of the Liberation Day parade got underway Thursday, just a short distance from Marine Corps Drive in Hagåtña, a poignant ceremony was taking place.

Families of fallen service members and their supporters gathered for the unveiling of The Pacific Islands Regional Gold Star Families Memorial Monument at Skinner Plaza. The monument was built in close collaboration with the Hershel "Woody" Williams Congressional Medal of Honor Foundation.

Williams is a Guam liberator and was anticipated to return to the island to lead the unveiling of the monument and attend parade celebrations. However, he died at the end of June, according to his grandson, Chad Graham, who is the president and CEO of the foundation.

Gold Star spouse Emma Wright said she met Williams during an event before his death. He was sharing information about his organization and the Gold Star monuments. But at the time she assumed Guam would never see a monument, "because it's Guam," Wright said.

"And I have never been more glad to be wrong," she added.

"I remarried military. And I don't know many other war widows that do that. So, I've got kind of a unique situation and I don't have the same kind of family that everyone else here has sort of had and relied on," Wright said. "It kind of stung for me, that all of what I've seen in the states wasn't available here. So, what I'm hoping is that this monument doesn't just represent a place to go and be sad. ... It's an opportunity to always be honoring and remembering the lives of the ones gone too soon by being present for the ones they left behind. Thank you for this gift."

"It brings me great comfort to be able to come to this monument and stand with the Gold Star families, shoulder to shoulder, as we build a community, develop respect and be as one," Aurora Carbullido said.

Graham, the keynote speaker for the unveiling, recalled Wright's statements as he delivered his remarks, stating that the monument is not just a place of sorrow, but of remembrance, hope and togetherness.

"Our hope is this is not the end of a project but yet it is the beginning of supporting each and everyone of our Gold Star families in this whole region," Graham said.

The monument was also supported by an organizing committee, made up of Eutemio “Tim” Ohno, team lead; Diron J. Cruz; Armilyn Lujan and Joey San Nicolas.

If you were a public health inspector, how would you grade the school where you work or your child attends?

More than a decade ago, I was a senior at the University of Guam just beginning to understand more about Guam’s place in the world. As I allud… Read moreI Kinahulo’ Linahyan: The awakening of the masses

Disparity between public and private pay

With the recent announcement from Gov. Lou Leon Guerrero authorizing a 22% pay increase to classified government workers, I will say, yes, the… Read moreDisparity between public and private pay