Gov. Lou Leon Guerrero has submitted an official request for $3 million to the Office of Insular Affairs to obtain assistance from the Army Corps of Engineers in conducting a planning charrette for a new medical campus. 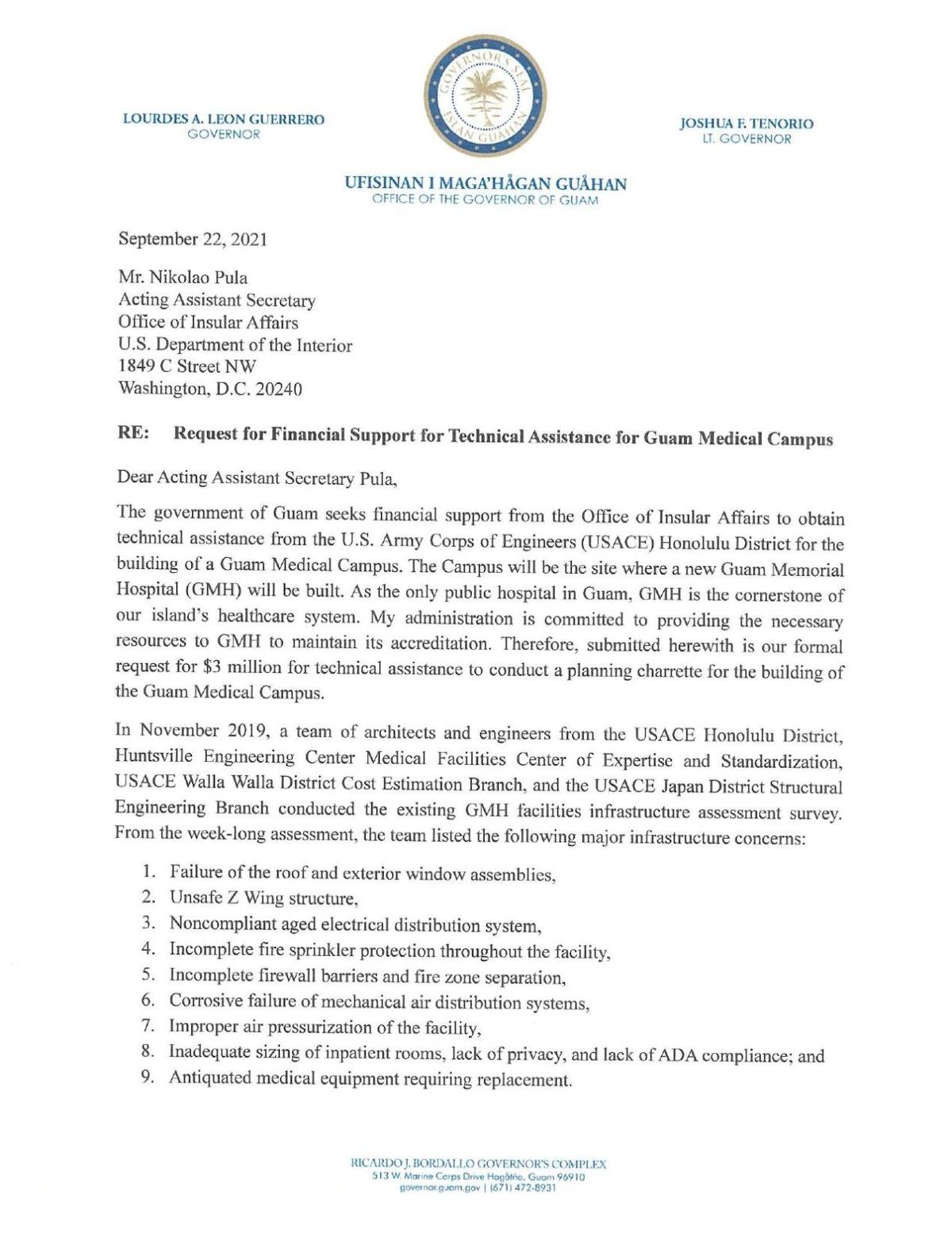 ACE officials met with the governor and lawmakers in mid-August to discuss assistance they could provide for the construction of a new public hospital - the charrette.

A charrette is essentially a type of planning process that will serve as a precursor for the architecture and engineering design. The output of this intense planning stage would be a scope of work that forecasts needs years ahead.

"In a charrette, we look at the entire life cycle costs of your hospital campus. Not just the initial construction, but phased construction to operation and maintenance ... At the end of the charrette, you have a scope that you believe in and you have a credible budgetary estimate," Lt. Col. Eric Marshall, Honolulu district commander of the Army Corps of Engineers, told lawmakers during a virtual meeting in August alongside Guam Del. Michael San Nicolas.

But the Army Corps of Engineers would need an estimated $2.6 million to $2.8 million to proceed with the charrette. Fifteen percent, or about $450,000, would need to come from federal funds.

This is the reason for the governor's request.

"The overall state of the (Guam Memorial Hospital) facility is in an overall state of failure due to age, environmental exposure, inadequate financial resources to support preplanned capital infrastructure replacements, and lack of previous facilities design adherence to building codes," Leon Guerrero stated in her request for financial assistance to OIA Acting Assistant Secretary Nikolao Pula.

The governor's letter also comes as the Guam Legislature is set to debate a financing bill for a new medical campus. The campus would include facilities for GMH, the Department of Public Health and Social Services, and the Guam Behavioral Health and Wellness Center.

The fiscal 2022 budget law already sets aside $35 million from anticipated earned income tax credit reimbursements from the federal government to a fund for the medical campus.

EITC reimbursement is also a source of funding in the financing bill, but Sen. Joe San Agustin, a co-sponsor of the bill, said he is willing to let the set-aside go to other uses if discussions in session indicate it's not needed yet.

It may be some time before actual construction takes place.

While Guam makes its request to move forward with the charrette, it could take one to two years for the whole process to complete. That timeline is also from the inception of funding.