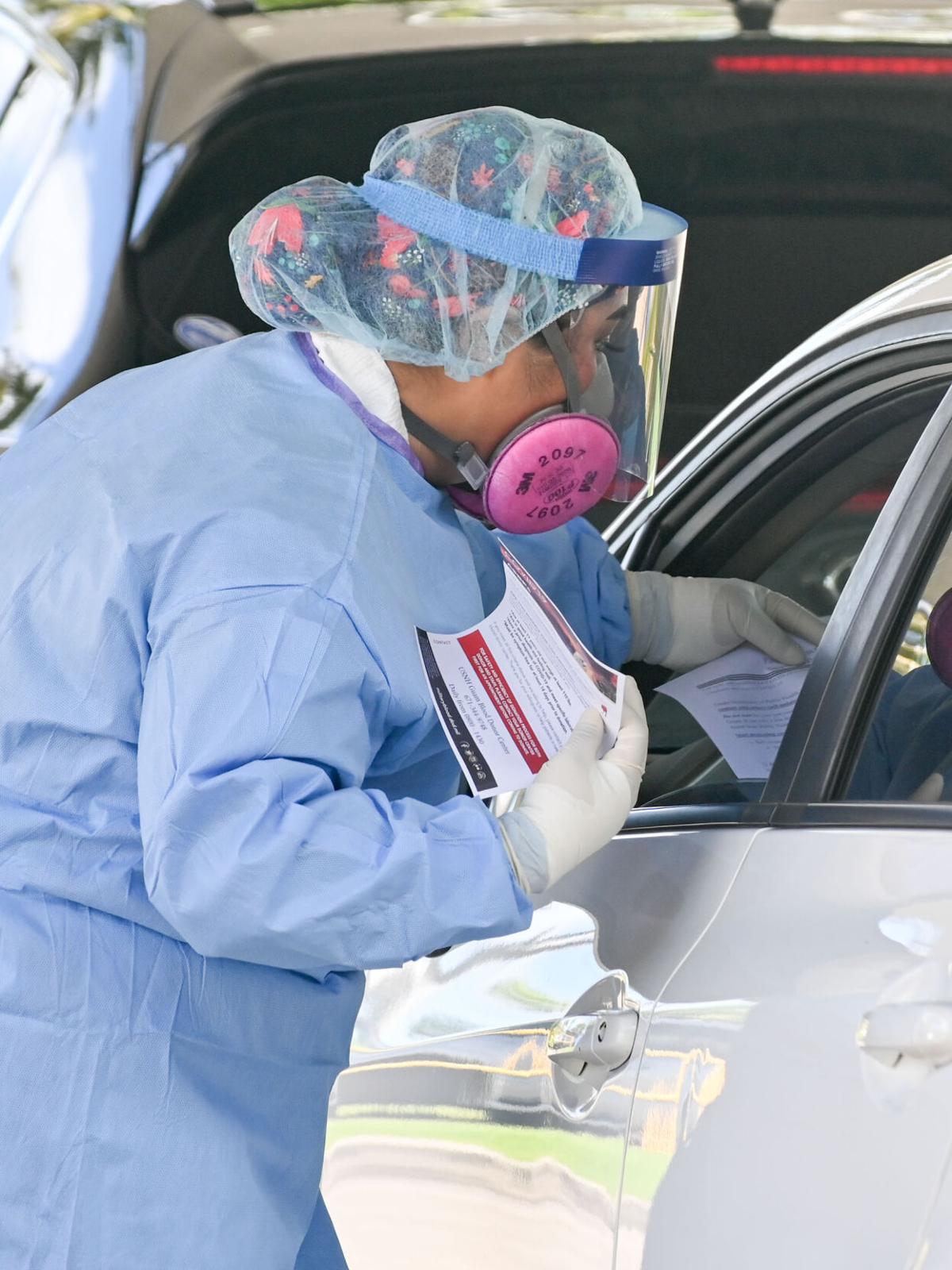 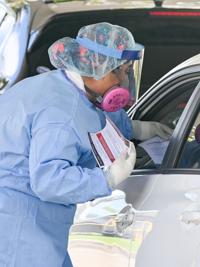 INSTRUCTIONS: A resident is given instructions by Department of Public Health and Social Services staff before COVID-19 testing at a community outreach July 23 at the Asan Mayor's Office. David Castro/The Guam Daily Post 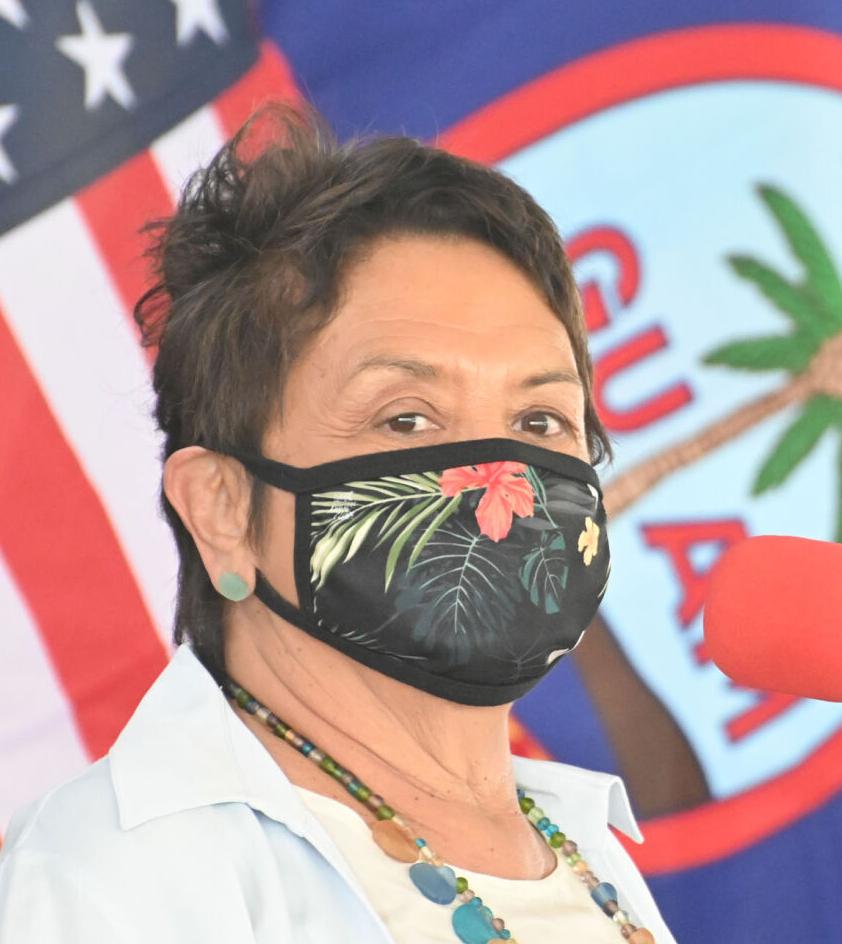 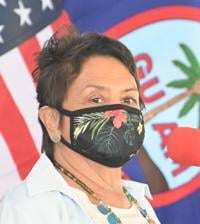 The governor stated she started experiencing symptoms on Aug. 8 after she initially tested negative on Aug. 5.

She was tested for the second time Monday afternoon.

"I have been in home quarantine since this weekend and will be isolated pending my recovery. I remain in good health despite exhibiting moderate symptoms of the virus," the governor stated.

"On Aug. 5, 2020, I was informed that I had come into contact with a close relative who had tested positive for COVID-19. Both my husband and I were tested, and we received a negative test result. Even so, we were advised to practice precautionary measures for the next 14 days. In line with existing protocol, I wore a face mask, limited travel to essential functions only, and practiced social distancing."

Lt. Gov. Joshua Tenorio and the acting chief of staff both tested negative for COVID-19, the governor stated.

"Together, we are monitoring the budget talks, and I will continue to lead the fiscal and COVID response teams from home," she added.

"Lastly, I implore everyone to use my experience as a reminder of just how serious and contagious this virus is. Help our island protect our loved ones. Wear your mask. Wash your hands. Practice social distancing."

The confirmation was made hours after six cases were confirmed following 714 tests by the Department of Public Health and Social Services and its health partners.

The additional cases raise Guam's total to 418. There have been more than 25,000 tests conducted since March, which have revealed a 1.6% infection rate, according to the DPHSS website.

Five people are hospitalized at Guam Memorial Hospital. One person was scheduled to be discharged Monday, three are in stable condition, and the fifth person is in the intensive care unit and requires the use of a ventilator, said Lillian Perez-Posadas, GMH chief executive officer.

The tests reported on Monday were conducted at:

This is the second week in a row that Naval Hospital, which works with the Naval Health Research Center, tested more than 100 people. Last week, the Navy hospital tested 255 people. The Guam Daily Post asked Joint Region Marianas and Naval Hospital officials last week and again on Monday if they are conducting mass screenings. There has not been a response to either query as of press time Monday.

The governor announced last week that bars would be closed for two weeks, and funerals would be limited to 25 family members. Wakes are not allowed.

Dr. Ann Pobutsky of Public Health said the recent restrictions were placed “because people have been acting as if the pandemic was over and they were not at risk.”

When asked about the increase in cases and whether this could be considered Guam’s second wave, the territorial epidemiologist responded:

“There is an increase in cases, but we are working to limit transmission of COVID-19 by finding linkages between cases and working to prevent further spread. DPHSS was able to find numerous COVID-19 cases at the quarantine facility, which illustrates that the quarantine works.

“However, now people should be aware that the increased number of recent locally transmitted cases of COVID-19 is due to people not following rules for social distancing and mask wearing, as well as having or attending large social or family gatherings.”

Pobutsky also noted the DPHSS contact tracing team has been working to investigate the household, community and travel activities of every person who has tested positive to identify anyone on Guam who may have been in close contact with the cases.

“They will be assessed for their exposure risk and provided with guidance for their health and recommendations for self-isolation or other restrictions,” she said.

With Guam’s rate of infection, or percentage of positive tests, having remained relatively low – less than 2% in comparison to the national average of 8% – Pobutsky said the rate is one way of understanding whether the “growth in COVID-19 cases on Guam is due solely to increased testing.”

“When coronavirus tests were in short supply in early March and April 2020, we were testing people with symptoms or individuals at risk (elderly people and people with chronic conditions),” she said. “But as more tests became available in May through July 2020, those with mild or no symptoms – who were less likely to have COVID-19 – were able to get (tested), which would lead to a lower positivity rate if the virus were not spreading,” she said.

Pobutsky noted, “The mass testing in the community ended up testing more than 6,800 individuals, but only 42 tested positive – less than 0.001% of the population – and most of these 42 people were sent to be tested at the mass screening sites because they had contact with a known positive case. There are going to be more positive cases uncovered if the virus is spreading in the community, and this is what we have seen recently, in the past couple of weeks.”

According to the Joint Information Center update, people in their 20s have the highest COVID-19 positive numbers at 86. They’re followed by people in their 30s then 40s, which show 75 and 72 cases, respectively.

Pobutsky said for most people, the novel coronavirus causes mild or moderate symptoms, such as fever and cough.

For some people, especially older adults and people with pre-existing health problems, it can cause more severe illness, including pneumonia, and death.

“The vast majority of people recover,” she said.

Nevertheless, she and other officials continue to urge residents “to remain diligent in following public health guidelines, such as wearing masks in public, social distancing and refraining from holding or attending any large social or family gatherings.”

Person-to-person spread of the virus occurs mainly via respiratory droplets produced when an infected person coughs or sneezes.

Take these everyday preventive actions to help stop the spread of germs:

• Avoid touching your eyes, nose, and mouth with unwashed hands.

• Stay home when you are sick.

• Cover your cough or sneeze with your arm or a tissue, then throw the tissue in the trash.