The cost of pay, overtime and benefits for Guam police officers detailed to provide security to Gov. Lou Leon Guerrero, Lt. Gov. Joshua Tenorio and their families exceeded $2 million a year in the two most recent years while the COVID-19 pandemic saw government shutdowns and minimal travel. 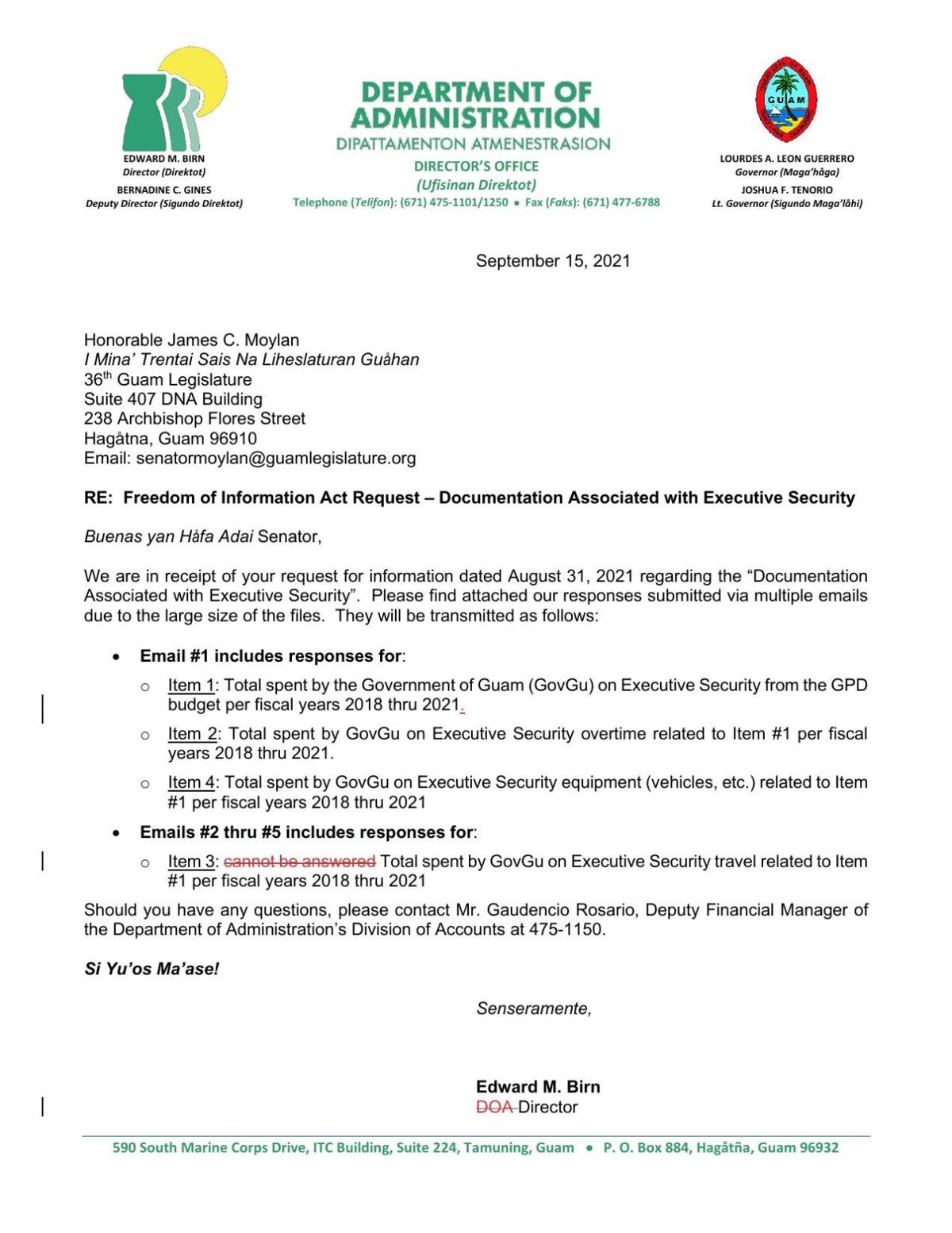 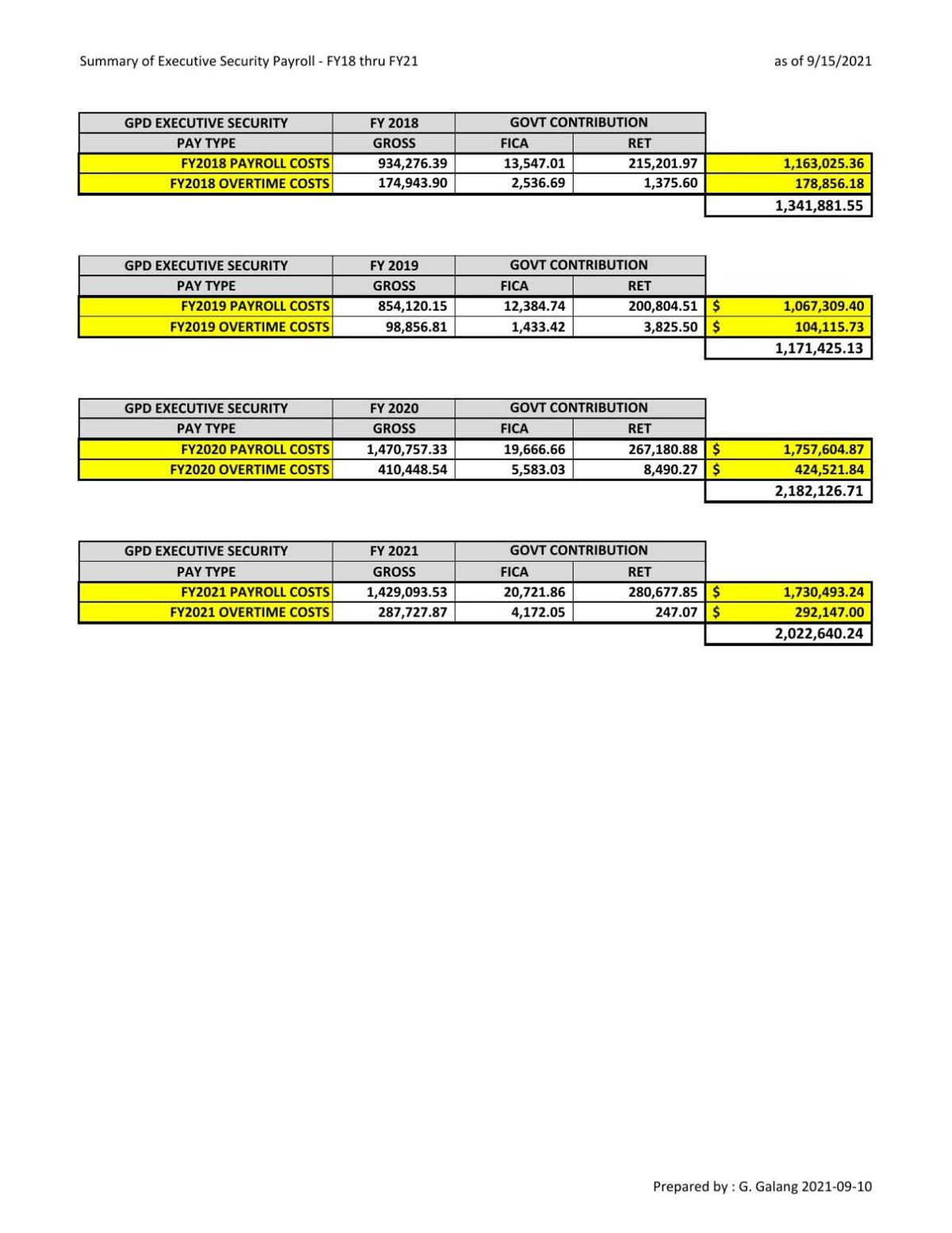 In a statement, the governor's office said, in part: "The increase in executive security is a result of pandemic response activities and the associated specialty pay, differential pay, and hazardous pay adjustments which affected both regular and overtime pay for police officers as well as all other front liners." 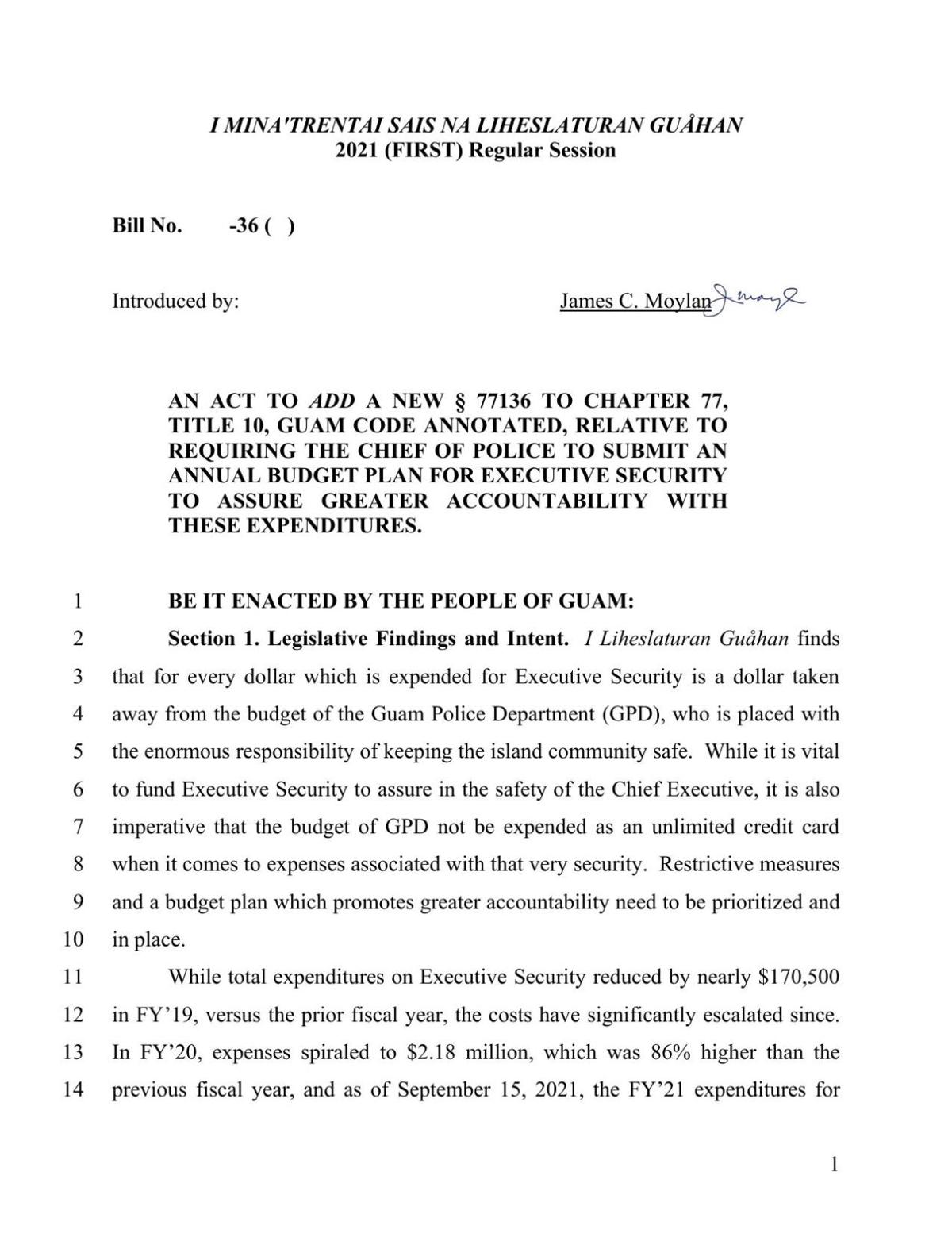 The Leon Guerrero-Tenorio administration was elected in November 2018 and took office in January 2019, a quarter into fiscal 2019.

In fiscal 2019, payroll for executive security amounted to around $1.17 million. This was about $170,400 less than the $1.34 million spent during the last year of Leon Guerrero's predecessor, former Gov. Eddie Calvo.

Fiscal 2021 is not yet complete, but there is only about a week and a half left in the budget year.

DOA provided 2021 payroll information as of Sept. 15, and with about $2.02 million so far, executive security costs for 2021 are showing a slight reduction from fiscal 2020 but are still higher than 2019 costs.

The total costs for executive security include the government of Guam's contributions for police officers' payroll tax and retirement.

In the prior gubernatorial administration, part of the costs of executive security stemmed from police officers providing escorts to the governor's and/or the first lady's travels.

The cost of executive security comes out of the Guam Police Department's budget.

GPD's 2021 budget was cut by $1.4 million, prompting the department to implement austerity measures.

In October 2020, GPD confirmed the department's austerity measures included turning off lights, computers and other appliances in offices when not in use. Officers also have to return all government vehicles at the end of their shift, instead of taking them home.

The Administration Department provided the executive security payroll information in response to a Freedom of Information Act request from Sen. James Moylan, who has introduced legislation that would authorize the chief of police to establish a budget plan for executive security, to be included in the department's annual budget request to the governor.

The bill would also require quarterly reports on executive security expenses and any variances from the projected budget. 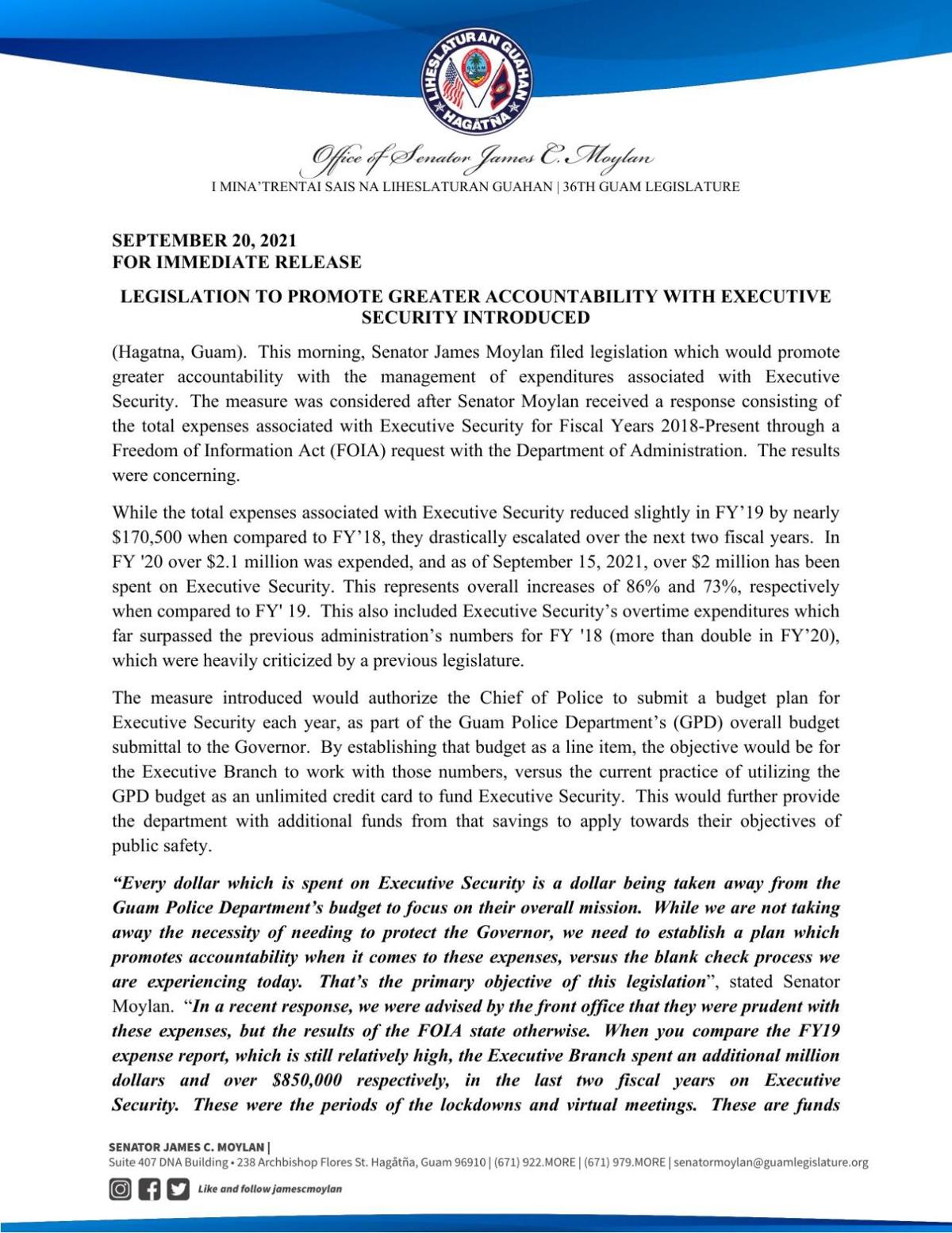 A release from Moylan stated that establishing executive security as a budget item would be for the executive branch to work with those numbers, rather than "the current practice of utilizing the GPD budget as an unlimited credit card to fund executive security."

"Every dollar which is spent on executive security is a dollar being taken away from the Guam Police Department’s budget to focus on their overall mission. While we are not taking away the necessity of needing to protect the governor, we need to establish a plan which promotes accountability when it comes to these expenses, versus the blank check process we are experiencing today," Moylan stated in the release. "In a recent response, we were advised by the front office that they were prudent with these expenses, but the results of the FOIA state otherwise."

The governor's office also stated: "The senator does a disservice to the media and the public by using numbers without context to support his recently introduced bill. To set the record straight, this administration has less executive security personnel than previous years, which the senator may not want to admit."

Before requesting executive security costs from DOA, Moylan tried to obtain the information from the Office of the Governor, but was told the office did not hold any responsive documents. At the time, Jon Junior Calvo, the governor's chief of staff, told Moylan that "the government of Guam does not treat any expenditure as an unlimited credit card."

"In fact, our administration has exercised fiscal discipline since taking office and has nearly eliminated the general fund deficit that has accrued over many years," the chief of staff stated during that initial exchange with the senator.

"These were the periods of the lockdowns and virtual meetings. These are funds being taken away from GPD and protecting the rest of the community. That isn’t right," Moylan stated in his release.