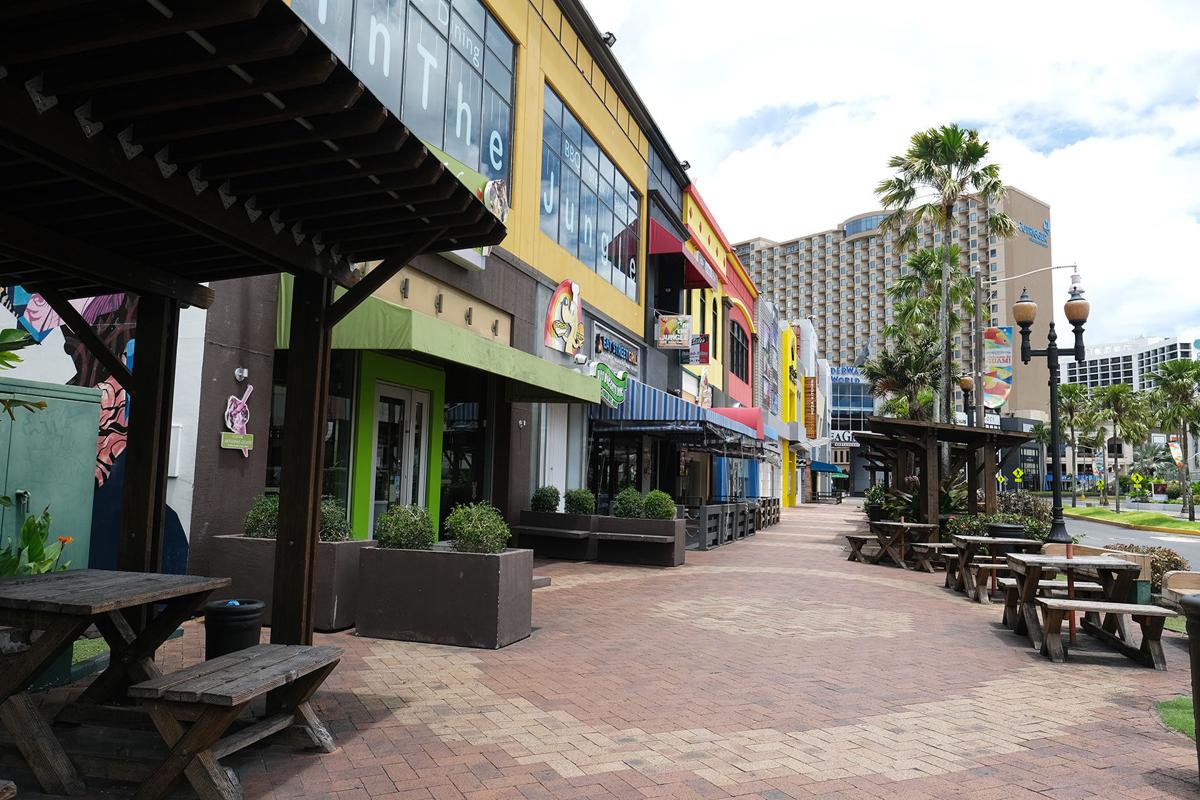 NO ONE HERE: This spot in Pleasure Island in Tumon is usually teeming with tourists. On Friday it remained empty nearly a month after tourist arrivals plummeted and eventually stopped. Norman M. Taruc/The Guam Daily Post 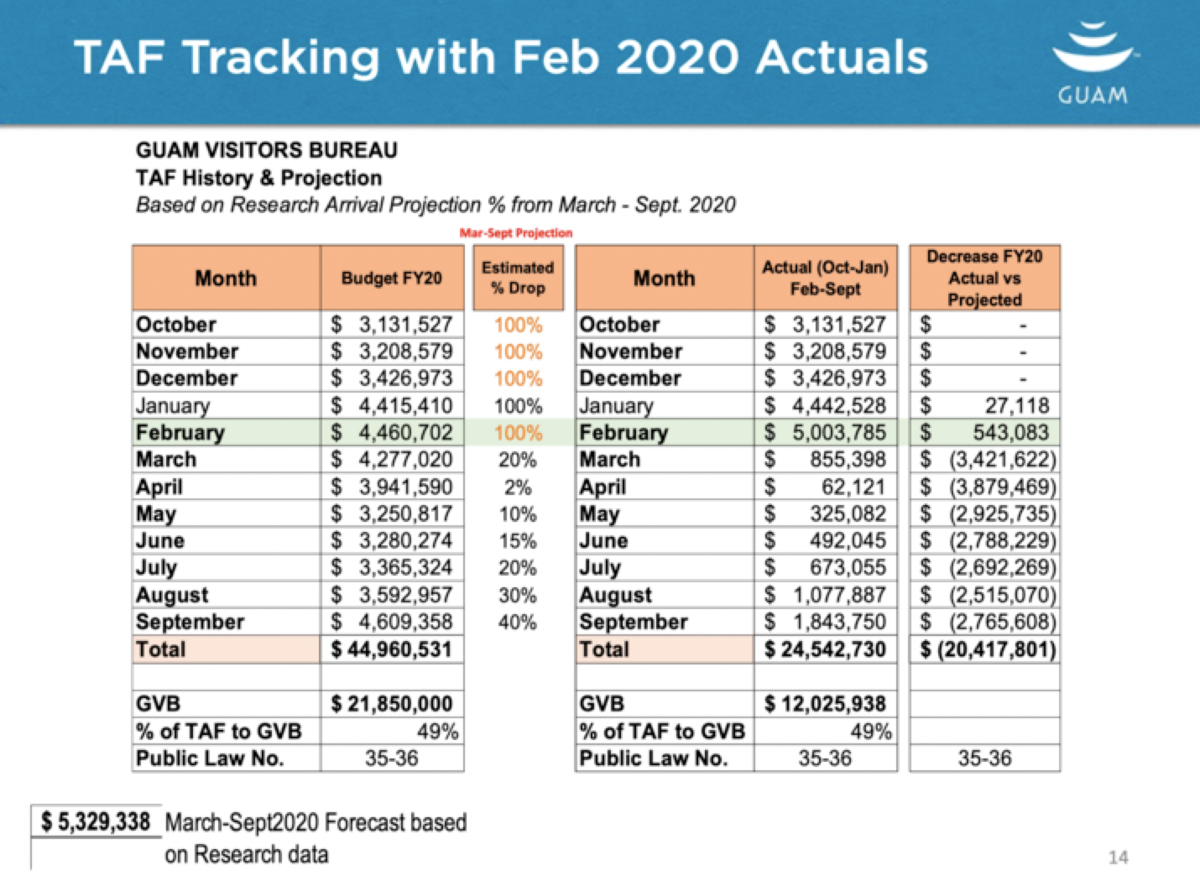 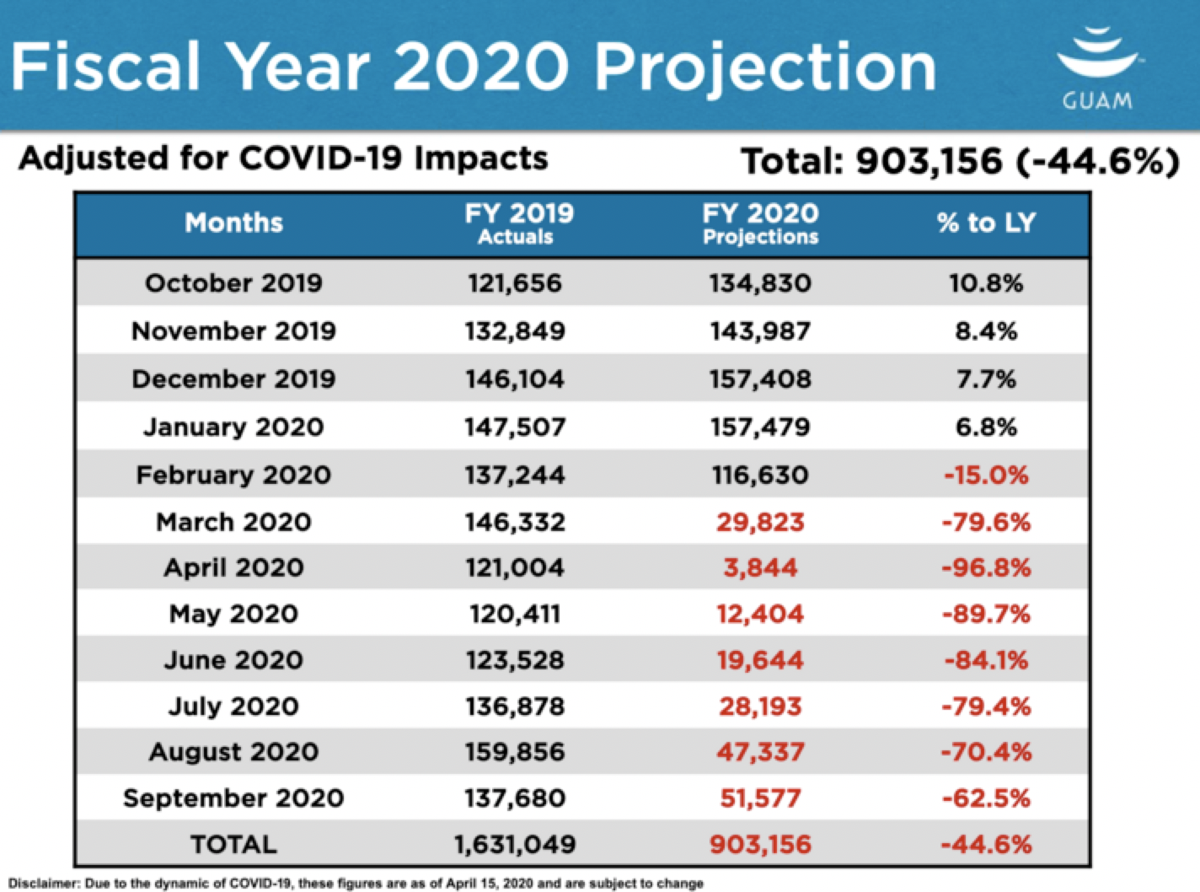 PROJECTIONS: The spread of coronavirus has caused severe reductions in Guam's tourism numbers, by more than half, as seen in this Guam Visitors Bureau chart presented at the April 16 meeting. Courtesy GVB

NO ONE HERE: This spot in Pleasure Island in Tumon is usually teeming with tourists. On Friday it remained empty nearly a month after tourist arrivals plummeted and eventually stopped. Norman M. Taruc/The Guam Daily Post

PROJECTIONS: The spread of coronavirus has caused severe reductions in Guam's tourism numbers, by more than half, as seen in this Guam Visitors Bureau chart presented at the April 16 meeting. Courtesy GVB

With nearly zero flights and a majority of hotel occupants being military and federal personnel, the Guam Visitors Bureau is cautiously working on a recovery plan that, admittedly, will be based on some assumptions.

“The only thing that’s certain is none of this is certain,” said GVB board Treasurer Sam Shinohara, United Airlines managing director of Airport Operations for Asia-Pacific.

Taking that uncertainty into consideration, the board of directors voted to reduce its budget from about $22 million to $12 million.

GVB’s budget comes from the Tourism Attraction Fund, which gets its money from the Hotel Occupancy Tax.

With only about 3,800 of its 8,600 rooms filled by sailors from the USS Theodore Roosevelt and Federal Emergency Management Agency personnel, GVB doesn’t anticipate getting much from the TAF for the remainder of the year.

Navy officials are working to get their sailors healthy and the carrier ready to return to its mission, so GVB isn’t anticipating the 3,200 rooms will be utilized for too much longer – at least not at the same level, based on current knowledge.

Fiscal year 2020 was initially projected to draw in 1.6 million tourists, but that number has dropped to 903,156 tourists – a 44.6% reduction – which again is based on the assumption that travel picks up again this summer.

The board is expected to meet again on April 30 to discuss its recovery plan, which will be rolled into a presentation for the governor.

No flights through May – for now

There are "essentially zero" tourists on the few flights coming into Guam, Shinohara said, a majority of those who are flying into Guam are returning residents.

"There are no bookings and I think demand is looking very, very weak through July," Shinohara said. "As we work toward building our recovery plans we need to understand, especially after the report that ... tour agents are shut down, just because we're potentially coming out of quarantine or social distancing on the May 5 time frame, that doesn't mean we're ready to take visitors. So our recovery plan needs to be very measured and it needs to ensure that we don't have significant challenges reintroducing visitors into the island. A lot of time and effort needs to be put into where we are going to expend our limited resources."

"I'm very concerned about demand in the very short term and I question whether or not all the service providers who were in the market will be back in the market ... because everyone is suffering significantly," he added. "Sorry. It's a bleak picture but I think it's important that we're all on the same page and I don't want anyone thinking it's going to be easy to get back into the market but we have to be ready."

Members of the GVB board said they will focus recovery efforts on Japan, South Korea and Taiwan.

And after a discussion from marketing representatives for the three primary markets, Director Joann Camacho was cautiously optimistic that South Korea could rebound quickly. According to Jay Park, a Korean musical artist scheduled to play on Guam, South Korea seems to be getting its COVID-19 situation “under control."

Hiroshi Kaneko, Japan marketing country manager, noted that his Japan office, while cautious, is working diligently with partners to get as clear a picture as possible of the challenges and what’s necessary to clear the road to recovery. He listed several items:

3. Mandatory quarantines in Guam; and

Market experts believe that tourists are looking at Guam and Hawaii.

But GVB board Vice Chairman Milton Morinaga warned that another factor that should be considered is the economic ability of any potential traveler and how much “dispensable income they have,” which dictates whether they travel at all, or travel to less costly destinations.

He said Okinawa and Hawaii, which are among Guam’s largest competitors, will likely drop their prices, leaving Guam as the more expensive destination.

Additionally, he noted that while many airlines haven’t announced flight cancellations for June, according to the governor’s medical advisory group, June is when Guam is expected to peak, in terms of COVID-19-positive patients.

GVB is also working with the Guam Hotel & Restaurant Association and the Guam Chamber of Commerce in reaching out to businesses impacted by the COVID-19 threat.

The information will be provided to the Department of Labor to prepare employers and employees for assistance programs.

Looking forward to next fiscal year's budget, the FY2021 budget year starting on Oct. 1, 2020, the board also approved a slightly optimistic budget, which was tempered somewhat by the Bureau of Budget Management and Research.

The GVB board's executive committee "voted to comply with the BBMR budget ceiling since GVB is not in the position to make adjustments on its FY21 budget amidst COVID-19."

The board as a whole approved the fiscal 2021 budget as presented on Thursday.

"It's a bleak picture but I think it's important that we're all on the same page and I don't want anyone thinking it's going to be easy to get back into the market. We have to be ready."