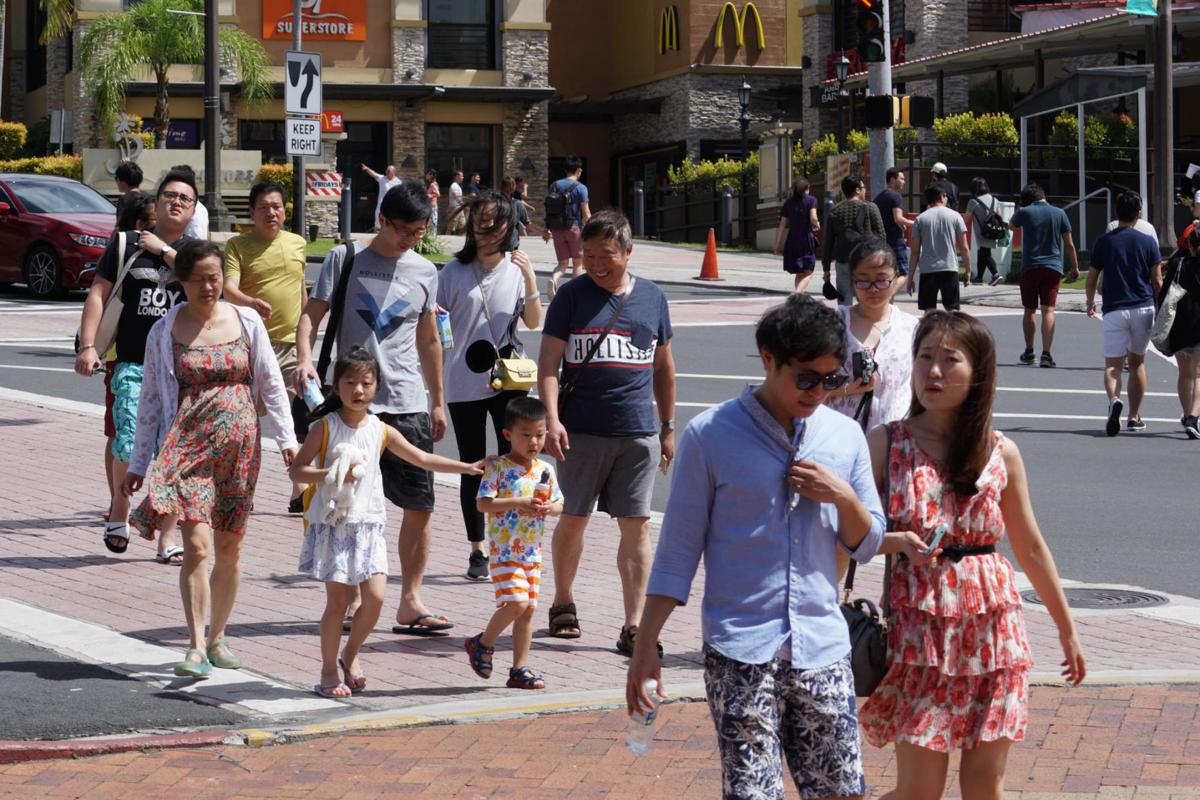 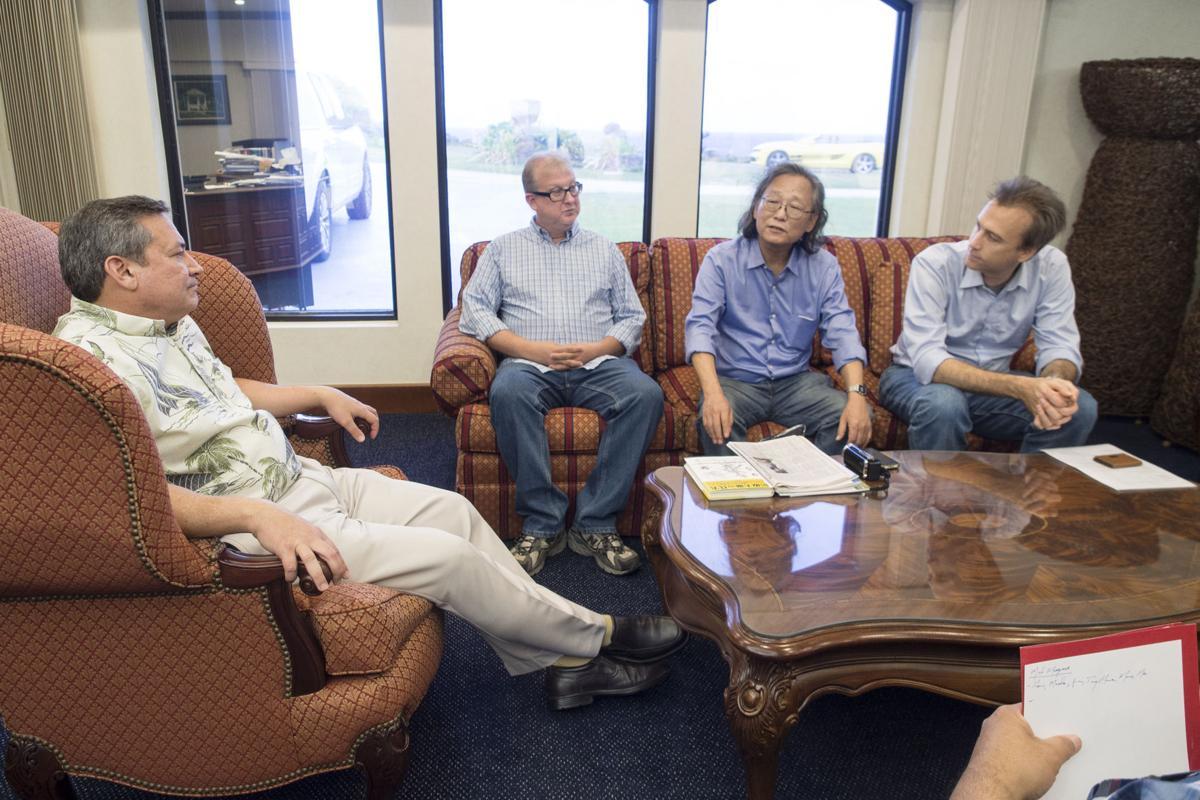 MARIJUANA: Koichi Maeda, second from right, meets with Gov. Eddie Calvo, left, at the Governor's Chamber at Adelup on Tuesday, Jan. 31. Maeda, the founder of the Japan Medical Marijuana Association, is researching the viability of bringing Japanese citizens to Guam for compassionate medical marijuana use, should a medical or recreational marijuana law be passed in Guam. At right is Japan Medical Marijuana Association international liason Colin Kawaguchi, and second from left is David Wiita, the Guam liason for the organization. Norman M. Taruc/Post

MARIJUANA: Koichi Maeda, second from right, meets with Gov. Eddie Calvo, left, at the Governor's Chamber at Adelup on Tuesday, Jan. 31. Maeda, the founder of the Japan Medical Marijuana Association, is researching the viability of bringing Japanese citizens to Guam for compassionate medical marijuana use, should a medical or recreational marijuana law be passed in Guam. At right is Japan Medical Marijuana Association international liason Colin Kawaguchi, and second from left is David Wiita, the Guam liason for the organization. Norman M. Taruc/Post

The Guam Visitors Bureau leadership wants to get more information before it takes a stance on a newly revived proposal to allow medical marijuana tourists into Guam.

GVB President and CEO Nathan Denight said the GVB board had requested for more information on the possible new market before throwing support for or against the idea.

GVB is in the process of putting together research findings, discussing the medical tourism venture with its off-island market offices, and gauging interests in those markets before engaging in the conversation, Denight said.

“We’re working with our offices and our research department to look into it,” Denight said. “We’re still learning about it and putting a frame together backed by some information and research. I want to present (the research) to my board before I give any formal position (on medical marijuana tourism).”

The potential for Guam to develop a tourist-oriented medical marijuana market resurfaced with the recent visit of a Japan group that urged local elected officials to expand Guam law on medical marijuana to include non-residents. The current language allows for residents to use marijuana to help ease the pain related to illnesses.

In Maeda's recent visit, he discussed the possibility of opening up the island's medical marijuana program to non-residents.

Through a translator, Maeda explained that Guam would be the only place in the Asia-Pacific region to have a legal medical marijuana program, referencing Japan’s outright ban on any form of marijuana possession, cultivation, or consumption, even outside of the country, he said.

However, Maeda also explained that in the case of Japanese medical patients who have incurable diseases, they would be exempt from the law banning use of the drug outside of Japan and would thus be able to travel to Guam for legal use of medical marijuana – a tourism aspect that JMMA supports and Gov. Eddie Calvo is open to.

"If there's medicinal use here for our local residents, then I do believe that same medicinal use should be for anyone that goes through Guam,” Calvo said.

One issue brought up by Department of Public Health and Social Services Director James Gillan is that of Guam’s reputation in the region and the kinds of tourists the island would be attracting if Guam were to open its doors to medical marijuana tourism.

“We want to be careful," said Gillan. "I don't think we want to get a reputation in any of the countries bringing tourist here as being a bad place, a place for marijuana, because a lot of attitudes are that it's a bad thing."

According to Maeda, the JMMA has already proposed medical marijuana tourism to Japanese patients for programs as far away as California, stating that the association is, however, looking for somewhere closer to home.

Maeda estimated that a potential 250,000 Japanese tourists would visit Guam each year if marijuana were legalized for recreation, in addition to medical purposes.

The JMMA also offered to advertise Guam as a medical marijuana destination.

Denight previously stated that the tourism agency had successfully initiated a charter incentive campaign in response to several flights being canceled in the Japan for the Guam route. The flight reduction was largely accountable for the decline in Japanese visitors, Denight said.

The new charter campaign brought about 100 flights to Guam last year, and will be bringing a committed 200 flights to the island this year.

GVB also is engaged in heightened online and social media campaign efforts in Japan and additional marketing tactics in other countries.

Are we ready to open the medical and recreational marijuana door to the world?

Marijuana shops are trying to look like the Apple store

After passage of Public Law 33-220, which officially implemented regulations for the island'…

It may be six months before any medical marijuana products are made available, but this hasn…

Speaker to revisit smoking age of 21

About a month after Gov. Eddie Calvo vetoed a measure that would allow for the home cultivat…

Gov. Eddie Calvo is preparing to submit legislation related to the use of recreational marij…