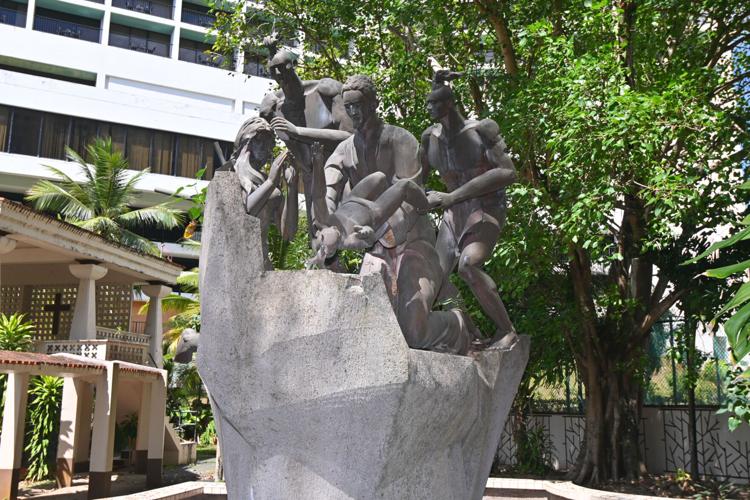 TUMON: A panoramic photograph shows the T Galleria by DFS Guam in Tumon, on Thursday. The Guam Visitors Bureau is hoping to market Guam as a place where Americans living in Asia can come to get vaccinated while on vacation. David Castro/the Guam Daily Post

TUMON: A panoramic photograph shows the T Galleria by DFS Guam in Tumon, on Thursday. The Guam Visitors Bureau is hoping to market Guam as a place where Americans living in Asia can come to get vaccinated while on vacation. David Castro/the Guam Daily Post

Guam's tourism officials weighed the possibility of marketing the island as a place where American expatriates in Japan, Korea, Hong Kong, the Philippines and other Asia-Pacific countries can get vaccinated while vacationing.

After more than a year of a tourism standstill, the Guam Visitors Bureau is looking to rethink its marketing strategies to welcome back visitors.

Its main tourist markets of Korea and Japan, however, are still struggling with low COVID-19 vaccination rates that impact their citizens' travel plans, officials noted on Thursday.

GVB tabled an earlier proposal to provide free PCR testing to tourists prior to their return to their home country, to entice them to visit Guam.

"The motion basically was subject to availability of funds. To be honest with you, we don't have any funds. They've all been committed," he said, referring to some $5.9 million allocated for the Matapang Beach Park upgrade, flood mitigation and marketing.

But GVB officials said Guam is in a unique position to pursue vaccine tourism among American expats in the region because it's one of the few areas in the region with ample U.S. Food and Drug Administration-approved COVID-19 vaccines.

Perez and board Director Sam Shinohara said there have been inquiries from American expatriates in the Asia-Pacific region and representatives from American chambers of commerce in the region, whether they can get vaccinated for COVID-19 on Guam.

"It's a big market," Shinohara said, adding that this vaccine tourism is a "brilliant" idea and a "win-win" situation for everyone.

GVB board Chairman Milton Morinaga and other bureau officials said that means these expatriates could vacation on Guam, stay at hotels and can continue to work remotely for three weeks to a month if they're getting the two-dose Moderna or Pfizer vaccines.

Besides helping with tourism, this can also be a "good deed" toward American citizens in the region, Morinaga said.

Bureau officials also said this complies with the federal policy of limiting the use of COVID-19 vaccines allotted to Guam to American citizens and residents.

Morinaga said he appreciates the ideas from board members and bureau staff on reinvigorating tourism. He said the board will continue to discuss the idea.

The board chairman and other officials, however, said that vaccine tourism may only be aggressively pursued after at least 80% to 90% of Guam's adult population is fully vaccinated against COVID-19.

He said this high vaccination rate is the type of news that could bode well for Guam tourism in the long run.

Guam has now exceeded Gov. Lou Leon Guerrero's Path to Half goal of fully vaccinating at least 50% or 62,500 of the adult population by May 1 to reopen tourism and lift post-travel quarantine.

The governor's next goal is to fully vaccinate at least 100,000 to achieve herd immunity by July 21, when Guam marks the 77th anniversary of Guam's liberation from Japanese occupation during World War II.

GVB officials said while tourism is expected to reopen in May, they don't anticipate a flood of tourists coming in by then. It could be August or September when Guam sees a considerable number of visitors, they said.

A similar island destination, Maldives, launched a new tourism campaign called "3V" for "visit, vaccinate, vacation," in which once all local residents have been offered a chance to get vaccinated, COVID-19 shots will be made available for anyone traveling there on holiday.

Former GVB Chairman and now Director Sonny Ada withdrew his motion pertaining to GVB pursuing financial support for testing tourists returning to their home country, if there are funds available, to give way to more robust discussion on vaccine tourism.

Ada said he supports the idea of getting vaccinated while vacationing on Guam. He also said the idea of still providing COVID-19 testing "should not necessarily be a dead issue."

Many places including Guam and its source tourism markets require negative PCR test results prior to arrival.

GVB officials said Korea announced on Wednesday that it will offer some exemptions to the mandatory two-week quarantine for people who have been fully vaccinated against COVID-19 after they return from overseas travel, to encourage more people to get vaccinated.