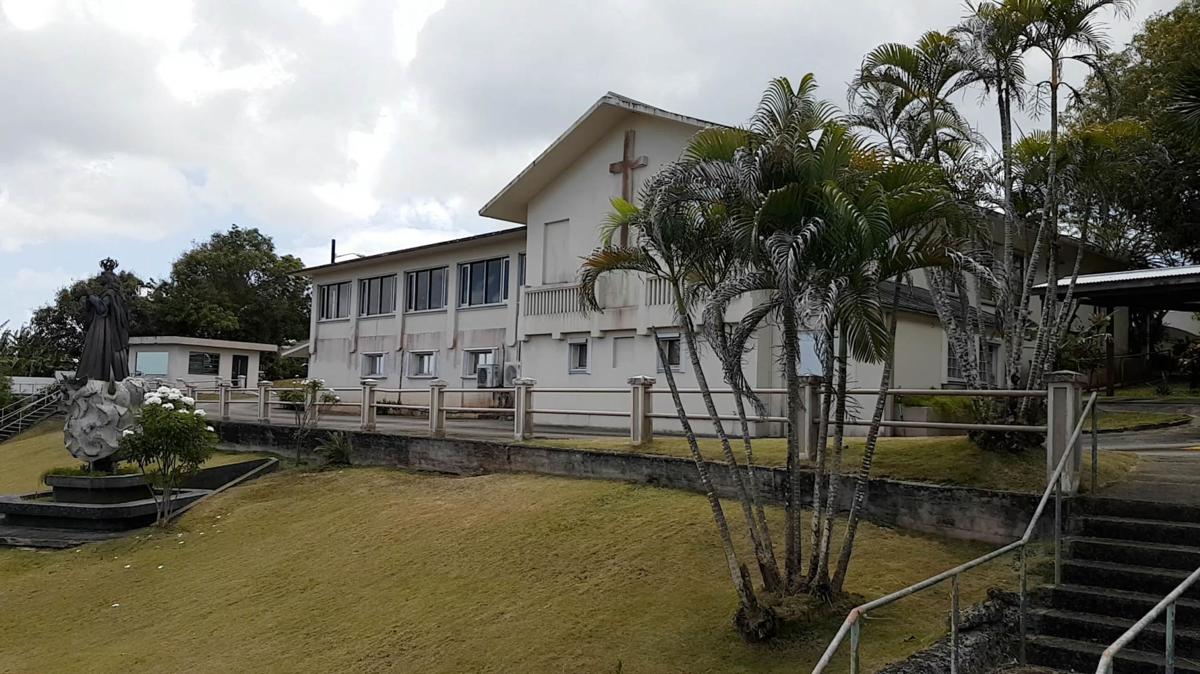 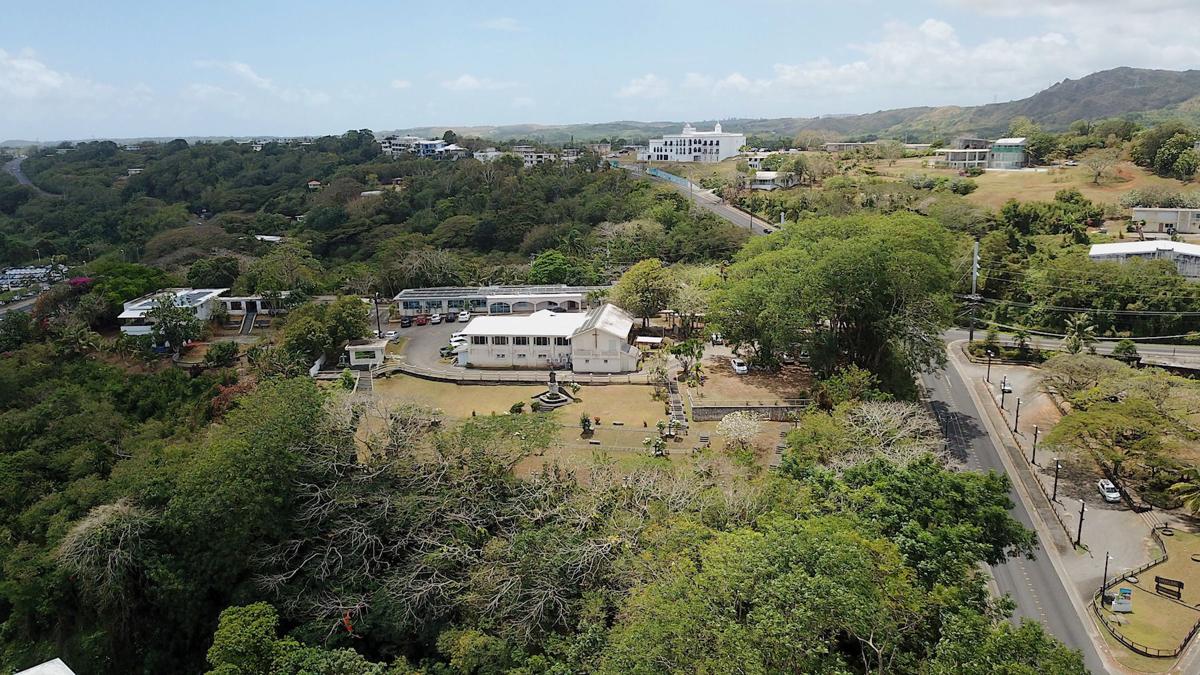 SAN RAMON HILL: The Archdiocese of Agana announced the sale of the property where its chancery offices are located. The property sits on San Ramon Hill overlooking the island's capital of Hagåtña. Dontana Keraskes/The Guam Daily Post 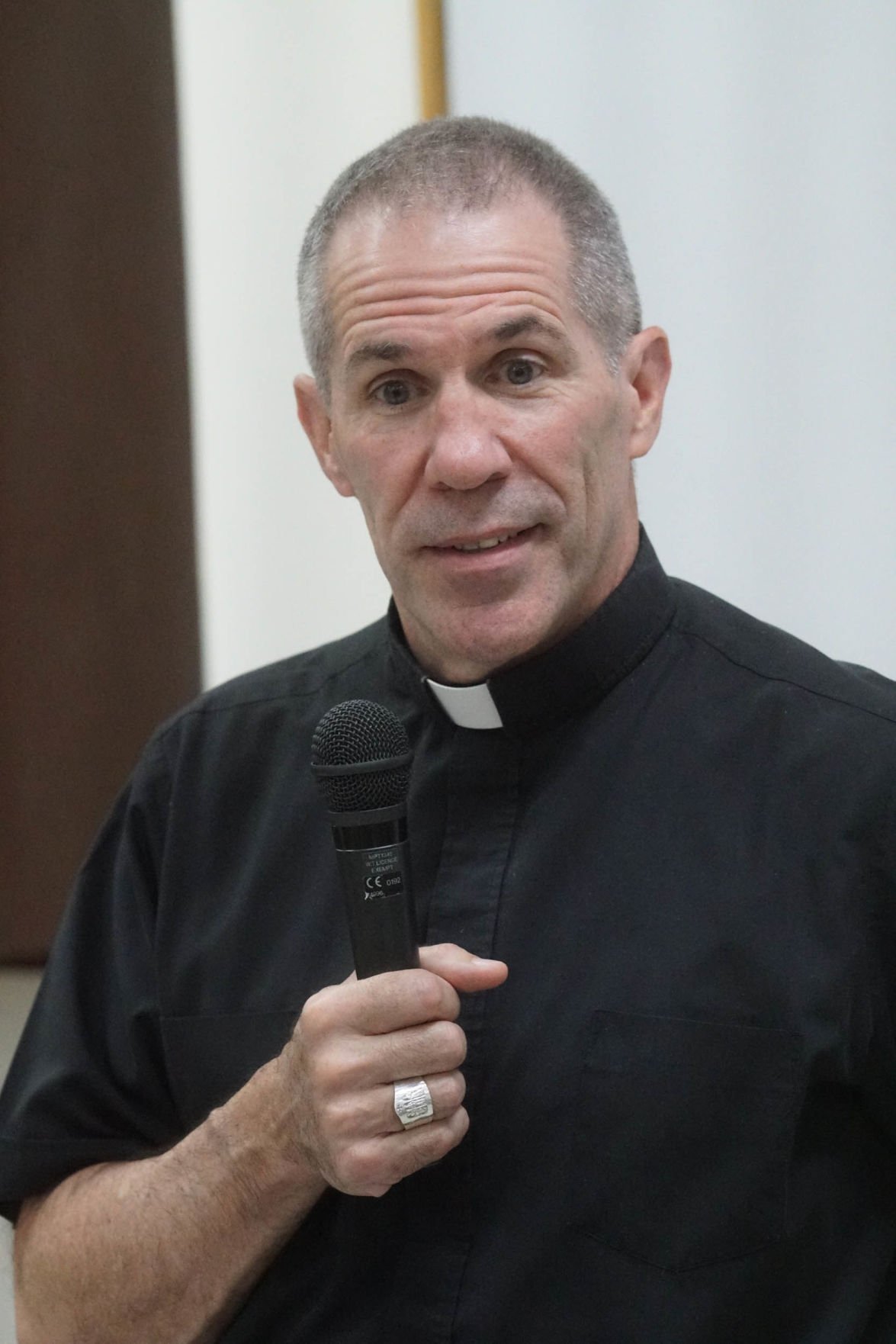 Archbishop Michael Byrnes held a press conference to announce the Chancery offices and Bishop's residence will be relocated and the property would be put up for sale. David Castro/The Guam Daily Post

SAN RAMON HILL: The Archdiocese of Agana announced the sale of the property where its chancery offices are located. The property sits on San Ramon Hill overlooking the island's capital of Hagåtña. Dontana Keraskes/The Guam Daily Post

Archbishop Michael Byrnes held a press conference to announce the Chancery offices and Bishop's residence will be relocated and the property would be put up for sale. David Castro/The Guam Daily Post

In a move described as symbolic – the turn of a chapter in history of the Catholic Church on Guam – an entire hilltop property where the archbishop lives and where Pope John Paul II slept during his historic 1981 visit is being offered for sale.

Archbishop Michael Byrnes described the Archdiocese of Agana's decision as a "turning of another page" in the Catholic Church on Guam.

The archdiocese has decided to sell the hilltop complex without naming a price. But it's being sold by a seller under financial distress.

Rocked by more than 150 sexual abuse cases against former members of the Catholic clergy, and facing lawsuits asking for hundreds of millions of dollars in damages combined, the archdiocese has been forced to place some of its prime properties for sale. A former seminary that once was the Accion Hotel also has been put up for sale.

"It is a property we could give up," Byrnes said of the archbishop's residence, which is part of a complex called the chancery. It also holds offices for the archdiocese. The archbishop will have to move, and so will the offices and staff.

Byrnes on Wednesday described the property's place in Guam history, where mementos of Pope John Paul II's stay are evident.

"It's one of the highlights of this place," Byrnes said. "There's plaques all over the house. Pope John Paul II slept ... and resided in this house for a day."

The property, which takes up most of San Ramon Hill, offers a view of the Dulce Nombre de Maria Cathedral-Basilica, the entire capital of Hagåtña and Agana Bay.

Byrnes, in a press conference Wednesday, said the sale is one part of the larger archdiocesan-wide effort to sell church property during “challenging financial times” and the settlement of clergy sexual abuse cases.

For decades the property has been the private residence of Bishop Anthony Sablan Apuron, formerly archbishop. A Vatican tribunal has found Apuron guilty of certain crimes, but the details of the verdict were not released to the public.

The chancery office and its employees will be moved to the Cathedral-Basilica grounds, likely in September.

The bishop's residence had been located at the chancery for nearly 65 years, built "after the war," on land donated to the archdiocese by the estate of Henry Flores Nelson in 1950.

Bishop Apollinaris William Baumgartner, who arrived on Guam in October 1945 and served until his death in 1970, was the first bishop to live there.

The archdiocese does not have an appraisal or listing agent for the 7,000- to 8,000-square-foot chancery property.

'Turning another page in the book'

"Now that the mediation process related to the sexual abuse lawsuits has been set for September, the archdiocese is in the process of evaluating these claims on an individual basis," Byrnes said. "This necessitates the selling of certain properties owned by the archdiocese."

Byrnes said the practice of selling the pastoral center was not an uncommon practice on the mainland.

In July, the church identified 41 properties in total that had been deemed "nonessential." In the time since then, Byrnes said they'd been securing deeds and making sure they had the rights to those properties so that when they're ready to sell, they could.

"We've got to align our timing with the needs of the issued protocol," he said. "The problem with property is what the seller will accept and what the buyer will pay, so there is a real fluidity on the range of prices we could get."

Read more in our editorial:

Apuron verdict means the start of a new chapter for Guam

The Vatican’s verdict against Bishop Anthony Apuron, former archbishop, marked a historic moment for the Catholic Church and the people of Guam.