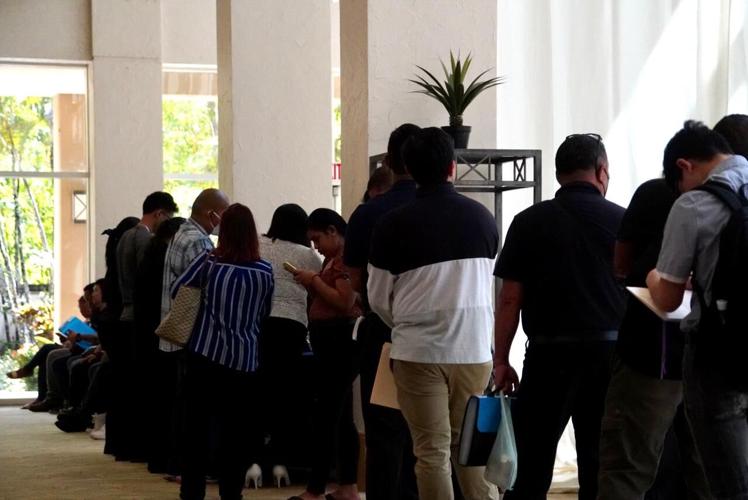 CAREER FAIR: A long line of applicants begin to flood the hallway of the Hyatt Regency Guam as United Airlines hosts their career fair to give opportunities to acceptable applicants to join the company off island, as seen Tuesday, Jan. 17, 2023, in Tumon. Jonah Benavente/The Guam Daily Post 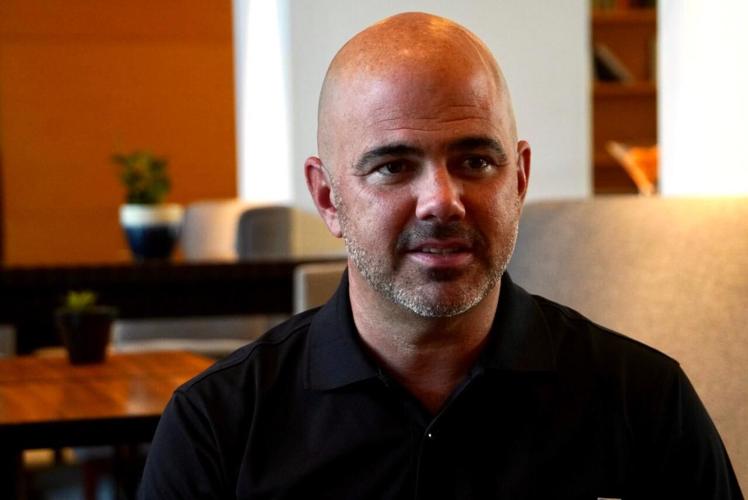 MILLER: Matt Miller, vice president of United Airlines' Denver hub, speaks during an interview at the Hyatt Regency Guam about the purpose and the benefits of the United's career fair held Jan. 17, 2023, in Tumon. Jonah Benavente/The Guam Daily Post

CAREER FAIR: A long line of applicants begin to flood the hallway of the Hyatt Regency Guam as United Airlines hosts their career fair to give opportunities to acceptable applicants to join the company off island, as seen Tuesday, Jan. 17, 2023, in Tumon. Jonah Benavente/The Guam Daily Post

MILLER: Matt Miller, vice president of United Airlines' Denver hub, speaks during an interview at the Hyatt Regency Guam about the purpose and the benefits of the United's career fair held Jan. 17, 2023, in Tumon. Jonah Benavente/The Guam Daily Post

Hundreds of applicants turned up for the first day of the two-day United Airlines Job Fair.

There were so many interested that United announced they will host a third day today to accommodate more interviews and walk-in applicants.

Cherlani Nauta, a potential employee, heard about the job fair from a newspaper article.

“I felt like I had better chances of getting an interview right away rather than going online and waiting for someone to call me. I’m actually looking at the ramp agent or being a desk agent,” Nauta told The Guam Daily Post.

Nauta had recently moved back to Guam in December and she was open to any career opportunity.

“I am OK with relocating,” Nauta said.

Nauta had to go through an application process that determined whether or not a potential employee would move on to the next phase.

“You have to check in, register and show them your ID,” said Nauta. “They send you an email and you actually have to go online and fill out their application. After the application, they send you an assessment to take. Then after you do your assessment, if you pass, you get called in for an interview.”

Matt Miller, vice president for the airline's Denver hub, was brought out to Guam along with 40 United employees to help facilitate the job fair in order to recruit 1,800 new employees for the rapidly expanding Colorado location.

“Denver is currently one of the largest hubs that we have at United. But more importantly, it is the fastest growing. We are fully staffed in Denver as it is today, but what we are doing is building for the growth we see coming this summer,” said Miller.

United recruits employees from all over the country. However, due to United’s well-established affiliation with Guam and its people, Miller said that they were eager to host this opportunity for the island’s residents.

“We are very proud of being Guam’s hometown airline and getting ready to celebrate our 55th year here on Guam in May. There is obviously a large connection on Guam to United. I think everyone has a friend or a relative who works for United. So, for us, having that connection is important,” Miller told the Post.

“We are so proud of the employees we have here on Guam and by offering the opportunity to move to Denver and offer some assistance with relocation, with a $25,000 bonus, it really gives everyone a chance,” Miller continued.

“If you’re able to start your career in Denver with United and then one day you want to move to Houston or you want to move to Los Angeles or, heck, you want to move back to Guam, you’ll be able to transfer if there’s job openings,” said Miller. “That’s part of the benefit of working for our company. (It) is the ability to kind of move around and take advantage of the relocations.”

According to Miller, United is well aware that it is a big commitment to pack up and leave one’s home and they want to make that transition as seamless as possible.

“Really, what we hope is it’s not just about the $25,000. It's about starting a career with a good wage, great benefits, health benefits, 401(k) benefits and, of course, travel benefits. Giving folks the opportunity if they want to do it, this might be the thing that it takes just for them to kind of get a new start in a new city,” Miller said.

At the Denver International Airport, United Airlines has historically had 66 gates in operation. Miller said as a result of the “picking up” of travel now that COVID-19 restrictions have lifted, United is preparing for that expansion.

Another potential employee, Kress Narruhn, said he wanted to apply at the job fair because he was looking for a change of scenery, something new to experience.

“I went online and checked it out and sure enough they did mention that it would be a relocation to Denver. I was like, 'Why not try it out and try something different?'” Narruhn said.

During the job fair, Narruhn sat in a presentation that detailed what would happen if an applicant was selected. Narruhn said that United was flexible when it came to when potential employees would actually start their new jobs.

“During that presentation, they tell you that you can actually request to postpone until you have your own bearing,” Narruhn said. “It’s not like once you get the job you have to go.”

He applied for the ramp agent position and said he was hopeful for the new opportunity and the possibilities for his future.

Applicants are encouraged to come out for the third day to complete the interview process.

There is no appointment needed to attend the career fair and walk-ins are encouraged.

Candidates may register for the Guam event in advance online at https://careers.united.com/us/en/events