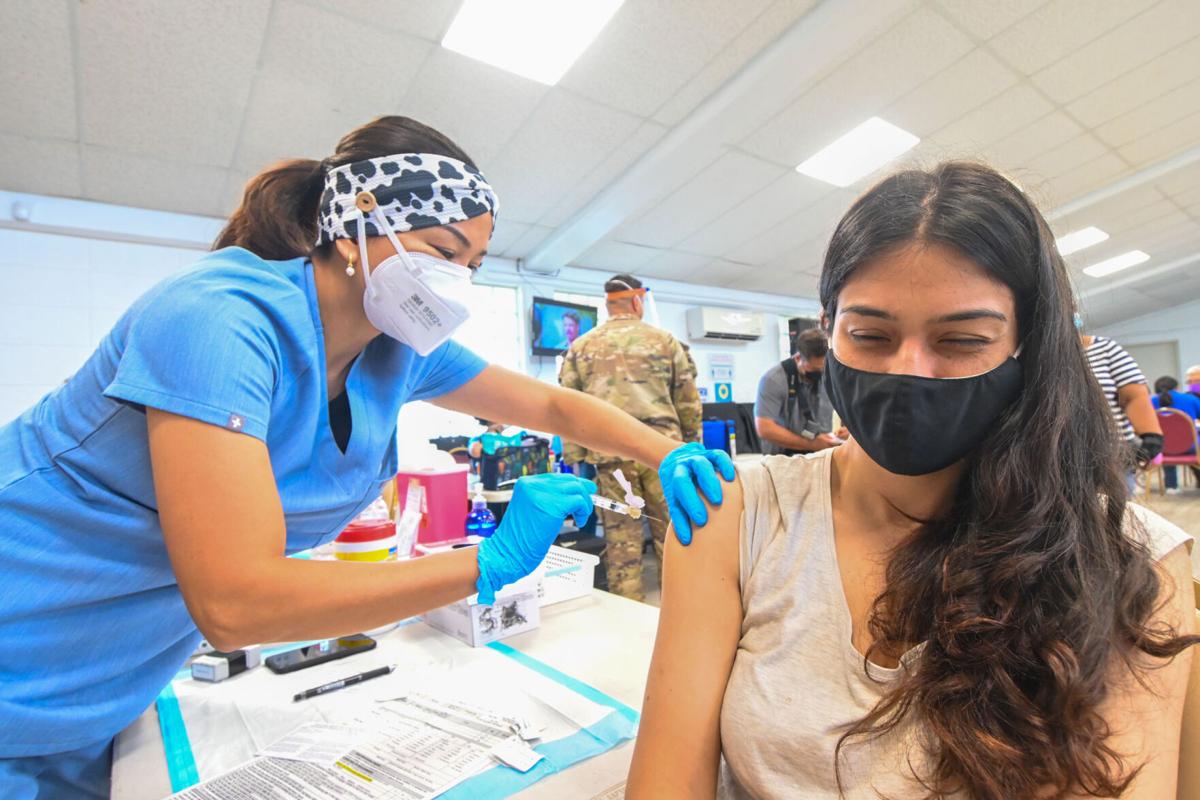 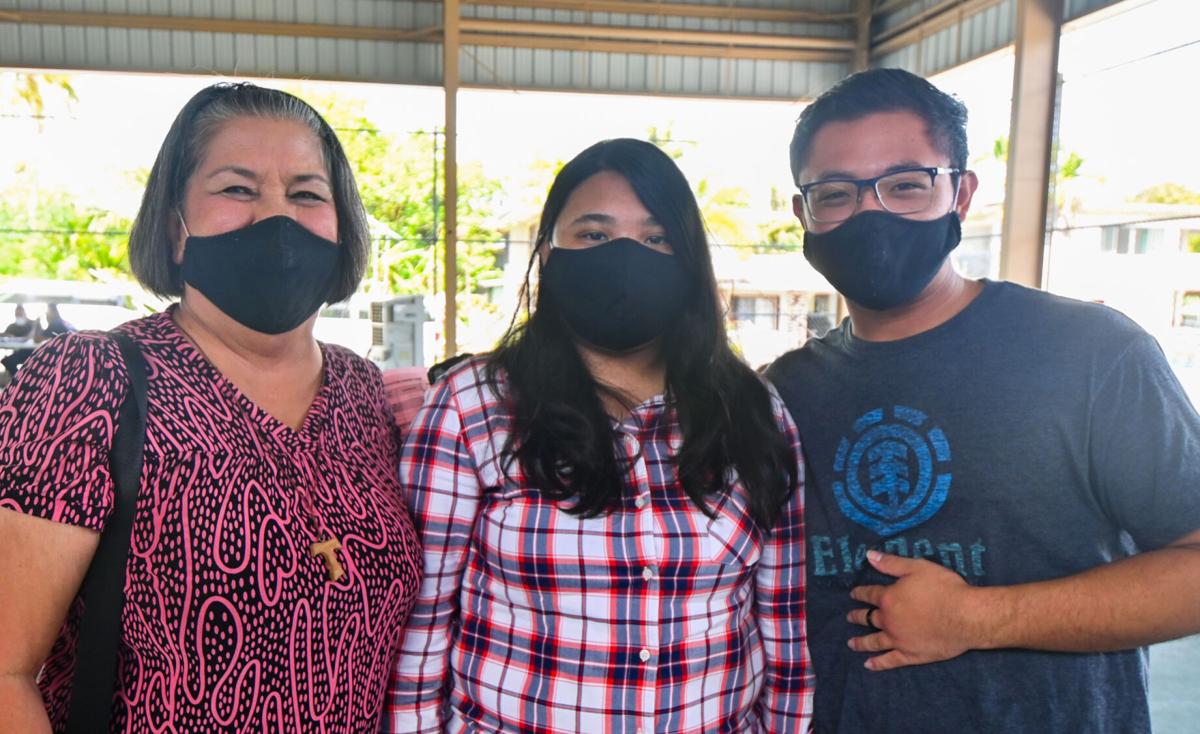 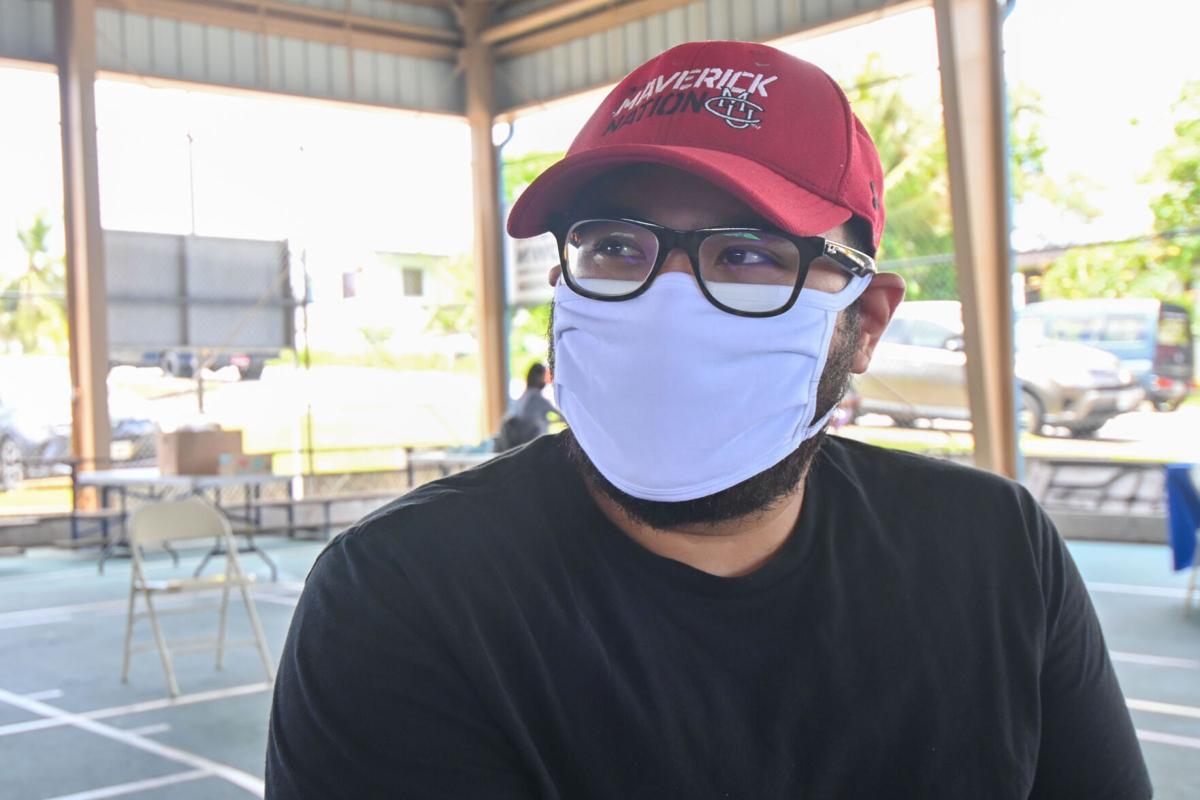 DELFIN: Eric Delfin, 25, talks about getting his first dose of the Moderna vaccine at the COVID-19 vaccination clinic held Monday at the Community Center in Sinajana. David Castro/The Guam Daily Post

DELFIN: Eric Delfin, 25, talks about getting his first dose of the Moderna vaccine at the COVID-19 vaccination clinic held Monday at the Community Center in Sinajana. David Castro/The Guam Daily Post

Vincent Mafnas, 42, said he believes he's done all the things he needed to do to keep himself from getting COVID-19 over the past year and had long been thinking of getting vaccinated against it, too.

"But I procrastinated," he said, after finally deciding to get his first dose of the Pfizer vaccine on Monday at the Department of Public Health and Social Services' village-based vaccination in Sinajana.

He said a major factor in his decision to get it, after several weeks of procrastination, is his belief that vaccination may soon become mandatory for anyone who wants to travel.

"So I said I better get it now. I've been blessed enough to not catch COVID because I've been staying safe all this time," he said.

Mafnas used to be a chef but a stroke put on pause his passion for creating good food. He's hoping the pandemic will soon be over, so he can go back to pursuing his passion.

"My message to others? Just keep staying safe until this is over, even if you already got the vaccine," he said.

Last Friday, the Department of Public Health and Social Services placed an order for 22,230 doses of Pfizer and 10,500 doses of Moderna vaccines, totaling 32,730 COVID-19 vaccines for this month. All vaccines are anticipated to arrive within three to five business days. This order is part of the 74,630 doses allocated to Guam's Public Health this month.

There are now at least 66,915 residents who have been fully vaccinated, and Gov. Lou Leon Guerrero said tourism will reopen on May 15 with eased post-travel quarantine for those fully vaccinated.

The governor's next goal is to fully vaccinate 100,000 adults by July 21, the 77th anniversary of Guam's liberation from Japanese occupation during World War II. She said when herd immunity is reached by then, it may well mark Guam's "liberation" from COVID-19.

Eight new cases of COVID-19 were identified out of 543 tests performed by DPHSS on Sunday and from tests run by other labs between Friday and Sunday, according to the Joint Information Center. Four cases reported recent travel history and were identified in quarantine. Seven cases were identified through contact tracing.

Donovan Lujan, 26, said he took his own time to weigh the pros and cons of getting vaccinated before making a final decision.

"I want to be 100% sure about it. I don't want to rush into it. I wanted to see first what's going on with the people who got it long before me," the public school aide said, shortly after getting his first Pfizer dose in Sinajana.

Lujan, a Mangilao resident, said he knew that sooner or later, he would get the vaccine but he at least gave himself time to really think about it, he said. He's the only one in the family that's not fully vaccinated, he added.

Aries Pingul, 23, said when the first village-based vaccination was held in Sinajana during Holy Week, his age bracket still wasn't a priority for vaccination.

"I was actually trying to wait for my younger brother to turn 16, in about two weeks, so I can accompany him. But the vaccination is here now so my parents told me to just get it now and they will accompany my brother later on," the Sinajana resident said.

Eric Delfin, 25, brought his 85-year-old grandmother, a World War II survivor, to get her first and second dose of the vaccine but at the time, people in their 20s still were not offered the vaccine so he waited.

Thankful that the vaccination clinic came back to Sinajana at a time when vaccination is now open to anyone at least 16 years old, Delfin finally got his shot.

"My grandmother took care of me when I was young and now it's my turn to take care of her," he said, adding that since the pandemic started, his grandmother stayed home most of the time.

At 60, Raymond San Nicolas said he waited for the volume of people getting vaccinated to be fewer than when it was just beginning, so he didn't have to wait in line.

At the beginning of the vaccination, the elderly waited in their vehicle or in line for hours to get vaccinated, and San Nicolas said he didn't want that for him and his wife, Leticia.

That's the reason, he said, that he and his wife were just getting their second dose of the Pfizer vaccine on Monday in Sinajana, where they live.

They got their first dose in April at a village-based vaccination clinic in Asan.

"We stay home most of the time since last year because of the pandemic," he said. "We want to protect ourselves more by getting this vaccine. It's better to be prepared. We're glad we got the second dose."

Sinajana Mayor Robert Hofmann, who also got his second dose of the Moderna vaccine on Monday, said the second vaccination clinic in Sinajana "saw an influx of people getting their first dose, which is good."

"For the sake of your family and loved ones, get protected, get vaccinated," he said.

A total of 148 got vaccinated in Sinajana on Monday, he said.

The Federal Emergency Management Agency and the Guam National Guard partnered with Public Health and the Sinajana mayor's office to bring the vaccination for a second time to Sinajana, the mayor also said.

Terry Sablan, 73, got fully vaccinated as early as January, and wanted her niece and nephew, who have been staying with her, to also get theirs as an added layer of protection against the virus, she said.

So she took her 16-year-old niece Kalyn Monterde to get her first Pfizer dose, as well as her nephew Duane Monterde, 20, to get his second dose of Pfizer.

Duane Monterde said one of his former co-workers got COVID-19 "and he didn't know where he got it."

"It's better safe than sorry," he said, so he got his first dose in April, also during a Sinajana vaccination clinic.