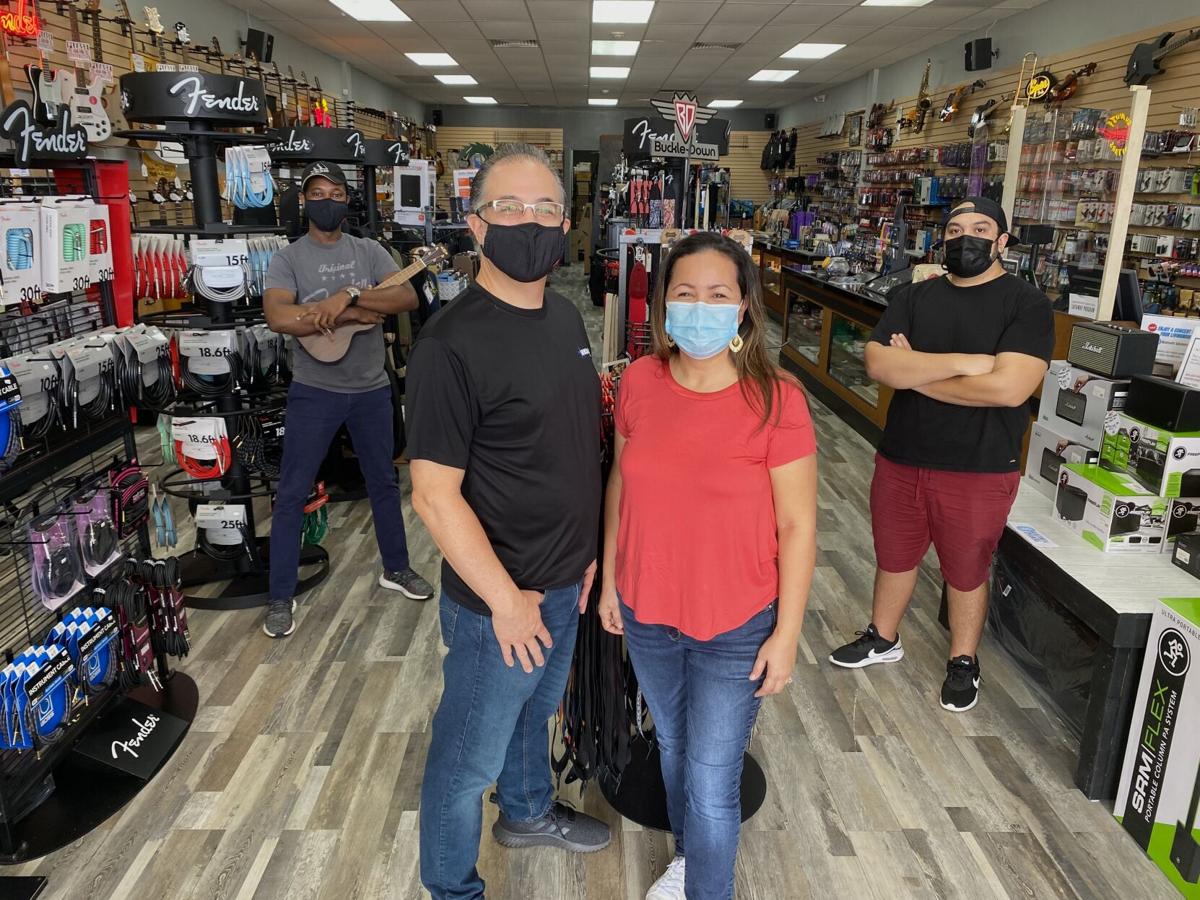 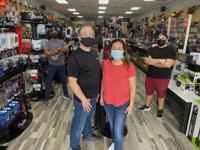 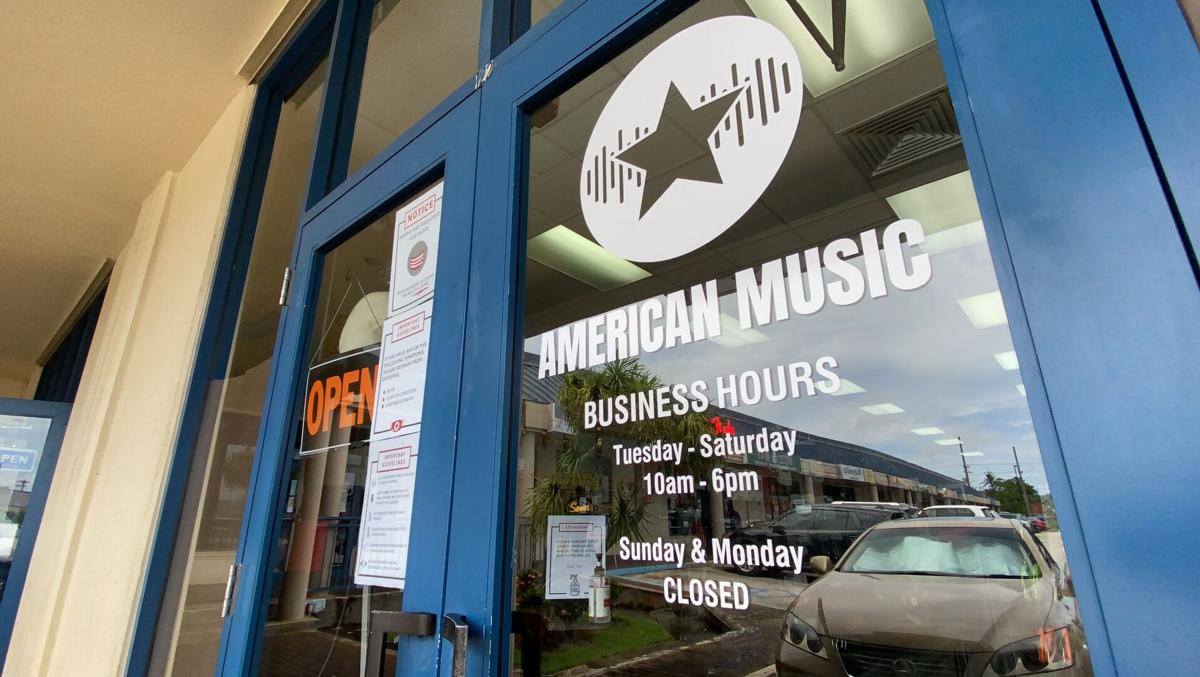 This year was supposed to be a great one for American Music.

Owners Janiece and Greg Sablan were in a larger retail space fully stocked with musical instruments and other items. They projected it would be a strong sales year, and one that would help them continue their mission of providing for the island's musicians as they've done for the last 15 years.

In March, the global coronavirus pandemic reached the island prompting the first shutdown of all nonessential businesses and government operations.

With kids at home and elderly parents, the Sablans knew what staying home could mean for the community. Fortunately, they had enough savings to carry them through for a reasonable amount of time.

They jumped on every opportunity for federal assistance to help keep them afloat and their employees on payroll.

They applied for and received federal Payroll Protection Program funds and applied for a loan from the Small Business Administration.

"There were a lot of tough decisions to make. Not knowing how soon we'd be able to open was really difficult," said Janiece Sablan. "Our goal was not to furlough employees and we were able to keep people on board, but the second lockdown posed greater challenges."

Not knowing what the future held and trying to think of every possible scenario of how to pivot their business and continue to operate, they were forced to make a huge decision. Either downsize or go out of business because there was no revenue coming in and they were locked into a hefty lease that loomed over them.

They were able to find a new space at Compadres Mall, where the landlord was willing to work with them if the government ordered additional closures.

Downsizing a product-heavy retail store and trying to fit their inventory into a smaller space – while also ensuring they were complying with public health guidelines – proved to be a challenge, but they made it work.

"We're trying to do all these things to keep our doors open and keep the community safe as well," she said. "We're hopeful optimists but when we hit week four, it was getting very scary."

The couple shifted again and went fully online, pushing products on their website and doing curbside pickup until it was prohibited.

"Things were really changing on a day-to-day basis. It felt like we were being pulled down through a current and not knowing how to get out of the current," she said.

"We had no idea when that 'out' was going to be. All the decisions we were making was based on what ifs and that's very scary."

When Gov. Lou Leon Guerrero announced the reopening of nonessential businesses, at 25% occupancy, the Sablans were relieved but knew it wasn't going to be enough to pay their staff and the bills.

"What really grieved me is the vilification of small business owners. We want to do the responsible thing but it was framed otherwise and our community was kind of at odds. It's just not a good feeling. We're all dealing with the same pandemic, but everybody's dug their heels in the sand with some position," she said.

She said small business owners like herself have had to consider closing their doors permanently as there are expenses below the surface that most people don't think about.

With small business owners struggling with the decision of whether to close, and falling into debt, Sablan was disheartened with the lack of empathy from some in the community.

"In relation to the political side of it, we felt decision makers weren't feeling the pain. They couldn't understand the real pain that we're all going through. It felt like every week when they were having press conferences, we were waiting for them to speak to this pain, this palpable pain that I think everybody should be able to sense. I just wanted somebody to address that to say that we understand your pain," said Sablan. "There was no empathy. All the people in the government were still getting a paycheck."

She was also waiting for clear data to understand the decisions that were being made.

The business owner said she doesn't want an "us versus them" mentality, but hopes that government officials and workers would understand the pain and plight of small businesses.

"The community doesn't need to be mad at the wrong people," she said.

"I think a lot of small businesses like ours, we did aggressively go out for all of that funding, but it wasn't meant to last this long," said Sablan. "My hope is that (officials) are going to take a moment, take a pause from the public health side – and that's important, but it's not everything. There's a need for a more holistic approach to how the pandemic has affected everybody."

“We are very realistic what will happen after December when this (federal) money is gone. We’re a boutique business. I envision it will be tremendously challenging for businesses like ours.” – Janiece Sablan, co-owner and business development manager, American Music

Sablan said she is hopeful government officials will bring small businesses together and allow them to make their voices heard.

"We have three legs to our economy and with tourism knocked out and potential small businesses really crippled from this, you can't stand on one leg. The losses have been so great. Many businesses may not be able to recover. For a small community, I feel grieved by it. It just feels like we've been ignored," said Sablan.

American Music has five people on its staff and one had to be furloughed. They have been able to stay afloat because they downsized, but a smaller space means fewer products to sell.

Going into what was supposed to be a robust holiday season, Sablan admitted they want to be optimistic but said they have to be really cautious about what they're projecting for next year.

"It's going to take a lot of time and guesstimating and I'm not looking forward to that at all," said Sablan. "We are very realistic what will happen after December when this (federal) money is gone. We're a boutique business. I envision it will be tremendously challenging for businesses like ours."

The couple believe the federal Pandemic Unemployment Assistance given to unemployed workers through December will help generate some holiday sales, but they know they'll also be competing against the big box stores and online shopping while also dealing with supply chain issues as manufacturing was at a standstill early on in the pandemic.

"When times are good and just pre-March, businesspeople in general have been so generous to the community. When somebody needed something for a fundraiser, sponsorship, we held up our side of things and we committed. I think that would be a great time for the community to have empathy instead of being angry at us. We should have a mutual concern for each other the same way we're concerned about the community," said Sablan.

"My hope is that things would tame down and we could all figure our way out from here."