TEARS OF JOY: John Jenson gets emotional Monday, Sept. 26, 2022, at the Governor's Complex in Adelup as he gives his thanks and love to the island and its community for the award bestowed upon him. Jonah Benavente/The Guam Daily Post 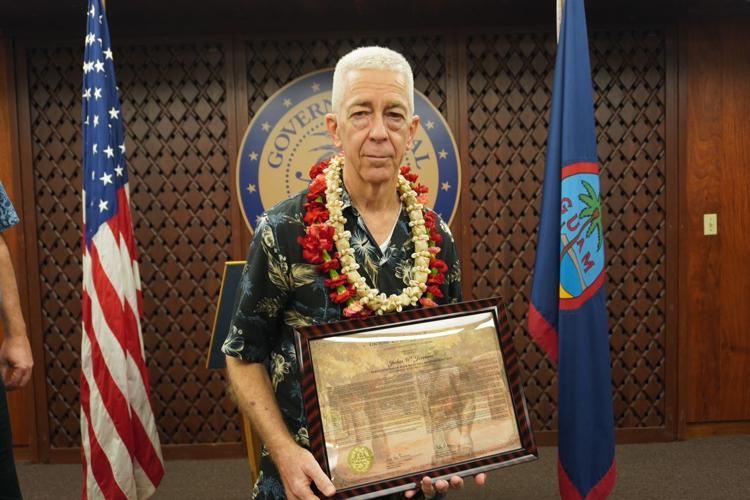 JENSON: John W. Jenson, on Monday, Sept. 26, 2022, at the Governor's complex in Adelup, is awarded the Ancient Order of the Chamorri for his contributions to UOG and the island of Guam. Jonah Benavente/The Guam Daily Post

TEARS OF JOY: John Jenson gets emotional Monday, Sept. 26, 2022, at the Governor's Complex in Adelup as he gives his thanks and love to the island and its community for the award bestowed upon him. Jonah Benavente/The Guam Daily Post

JENSON: John W. Jenson, on Monday, Sept. 26, 2022, at the Governor's complex in Adelup, is awarded the Ancient Order of the Chamorri for his contributions to UOG and the island of Guam. Jonah Benavente/The Guam Daily Post

John W. Jenson received the Ancient Order of the CHamorri award for his contribution to the island over the last three decades.

Acting Gov. Joshua Tenorio, on behalf of Gov. Lou Leon Guerrero, presented the honor during a ceremony held Monday at the Office of the Governor in Adelup.

The award is granted to individuals who contribute and demonstrate a genuine interest in the island community, history, cultures, traditions or values and concerns. It was presented in both the CHamoru and English languages, in accordance with local law.

Jenson joined the faculty of the University of Guam in 1993 after being hired as a hydrogeologist and groundwater modeler for the Water Environmental Research Institute of the Western Pacific, also known as WERI, according to the proclamation.

The scientist began teaching hydrogeology, Pacific Island geologic and climate history, and scientific competence and integrity in 1994 when he joined the UOG Environmental Science Program.

His research spans both fundamental and practical areas of island groundwater hydrology and environmental science, such as the mapping and numerical modeling of the Northern Guam Lens Aquifer, its hydrologic processes, the evolution of limestone island aquifers, salinity patterns and trends in Guam's production wells, reconstruction of the prehistoric climatic conditions of Guam and the Western Pacific, and the management of the Northern Guam Lens Aquifer and protection of groundwater quality, the declaration states.

Anita Enriquez, the acting UOG president, highlighted his work for the community during her remarks.

“(Jenson) is one of the most incredible individuals I have met over the past 30 years,” said Enriquez. “Dr. Jenson is such a blessing, not only to the UOG, not only to our island, but also to our region. The many partnerships that he has forged on behalf of the Environmental and Research Institute of the Western Pacific are very distinguished and notable.”

Recently, Jenson completed the hydrogeologic study of the Santa Rita spring and is collaborating with the Guam Environmental Protection Agency to develop an improved  approach to aquifer protection.

Tenorio shared the importance of the work Jenson has done for the island and region.

“There are just so many things happening with an expanded population and all of the challenges that come along with that,” the lieutenant governor said. “You managed to build up a reliable program, mentor so many professionals, so much, in fact, that a lot of the younger folks coming into the university, and I've met a few of them already getting in doing their service, some of them going on to the private sector. You've created basically a network of experts on local talent that we're able to learn from."

Over the years, Jenson has helped the university with recruited and local experts, according to Tenorio.

"You've been able to give us reliable information to protect our people in a very dynamic situation, and now in 2022, Guam is again shouldering the burden of peace in the region and security in a very big way," he added.

Finally, after the kind words, Jenson, who was emotional, expressed a few words of his own, noting it wasn’t done all on his own.

“I didn't do any of this myself,” said Jenson. “It's often the outcome of a team effort. Good science is a team sport. The legends leave out the rules and the students and staff and even the great discoveries, perhaps especially the great discoveries. Scientists may get the Nobel Prizes, but it's their staff and students who do the heavy lifting. I call them the front playing tricks of science. They don't give Nobel Prizes in geology. Geologists are the kids who come home with rocks in their pockets. And even if they did give Nobel Prizes for geology, this is better. It's been my privilege and honor to serve this great community and to be part of it.”

If you were a public health inspector, how would you grade the school where you work or your child attends?

Send in the clowns

That’s the title of a haunting melody from Stephen Sondheim’s 1973 musical “A Little Night Music.” It was a big song in its day, with some 500… Read moreSend in the clowns

Disparity between public and private pay

With the recent announcement from Gov. Lou Leon Guerrero authorizing a 22% pay increase to classified government workers, I will say, yes, the… Read moreDisparity between public and private pay