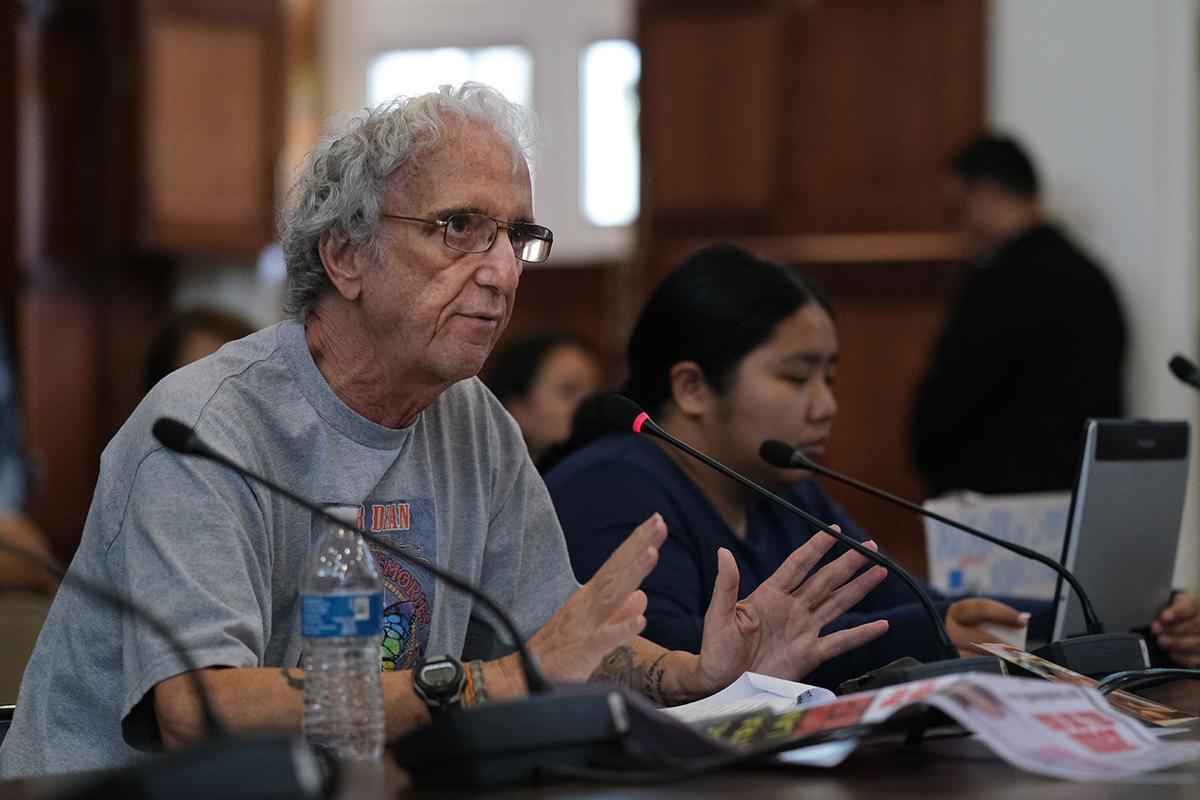 TESTIMONY: David Lubofsky testifies at an informational hearing on Guam’s Medical Malpractice Mandatory Arbitration Act at the Guam Congress Building in September 2019. Lubofsky is the father of the late Asher Lubofsky and has repeatedly called for reform of the arbitration law. Post file photo

TESTIMONY: David Lubofsky testifies at an informational hearing on Guam’s Medical Malpractice Mandatory Arbitration Act at the Guam Congress Building in September 2019. Lubofsky is the father of the late Asher Lubofsky and has repeatedly called for reform of the arbitration law. Post file photo

Superior Court of Guam Judge Arthur Barcinas has decided to stay the case involving the death of 5-year-old Asher Lubofsky and allow for arbitration. In reviewing the case, he also found Guam's controversial Medical Malpractice Mandatory Arbitration Act to be constitutional.

At the same time, however, the court acknowledged the obstacles and burdens imposed by the law on medical malpractice claimants.

Asher Lubofsky's parents filed suit against the Seventh-day Adventist Clinic, a doctor and a physician assistant, as well as the clinic's insurance company, following their son's death in October 2018, alleging negligence on the part of medical officials.

Robert Keogh, legal counsel for the Lubfoskys, said they had 30 days to decide if they will appeal the decision, and that is currently under consideration.

In addition to seeking damages for their son's death, the Lubofskys challenged the constitutionality and organicity of Guam's mandatory arbitration act.

The decades-old law requires arbitration, an out-of-court settlement process, prior to taking a medical malpractice case to court.

Critics of the law say it presents a challenge to due process as it blocks access to the courts behind costly arbitration.

In reviewing the Lubfosky case, Barcinas acknowledged "the obstacles and hurdles the MMMAA has created for medical malpractice claimants."

First, the law imposes a "prohibitively expensive private arbitration" as a prerequisite and barring direct access to the courts.

Second, other than the American Arbitration Association, there has been no other entity that has been organized under the law to administer alternative dispute resolution.

Lastly, while some or all of the AAA filing fees can be deferred upon a showing of financial hardship, "at least half of the administrative costs, as well as the 10 arbitrators’ fees, must be paid in advance," according to the court decision.

Lawmakers held a series of roundtable discussions in the months following news of the Lubofsky child's death, as well as details of other cases and challenges to the law, such as in the case of Aiden Quaile. Quaile was barely a month old when he died in 2011. His parents filed a lawsuit in federal court years later, raising negligence claims against health care providers and bringing into the spotlight Guam's three-decade-old Medical Malpractice Mandatory Arbitration Act.

However, the only legislation to have surfaced from those discussions was a bill introduced by Speaker Tina Muña Barnes, which doesn't remove the arbitration requirement but creates some financial assistance for eligible individuals - similar to what had been proposed by some doctors.

There have been a few significant cases on Guam tracing the history of the local arbitration law.

Perhaps the most significant is Awa v. GMH, which led the 9th Circuit Court of Appeals to strike down the original version of the law over inconsistencies with the language.

The current law, with amendments to correct the issue, was later enacted in the 1990s.

Another case surfaced in the early 2000's with Carmen and Romy Laguana challenging the Marianas Physicians Group in the Superior Court.

Barcinas referenced the case in his decision, as it was the only time the issue of the validity of the statute reached the Supreme Court of Guam.

The lower court determined that the law violated the separation of powers doctrine, but the Supreme Court overturned that decision in 2004.

The higher court, however, left open the matter of whether the arbitration law violated the Laguanas' rights to a jury trial and free access to the courts, as well as their due process and equal protection rights.

The lower court ultimately determined that mandated arbitration did not violate the plaintiff's rights but, because the Supreme Court has not decided on the matter, "the issue of whether (the arbitration law) is unconstitutional on other grounds other than separation of powers remains unresolved," Barcinas stated.

Regardless, Barcinas noted that it is clear the arbitration law was intended to address the rising cost of malpractice insurance on Guam and the court cannot conclude with the facts presented that the law was not narrowly tailored to accomplish that purpose.

"Although the MMMAA places a burden of keeping malpractice insurance premiums low and maintaining affordable health care on one small and vulnerable sector of society, namely nonwealthy victims of medical malpractice, the court cannot conclude, with the facts before it, that the MMMAA is not the least restrictive alternative necessary to accomplish the Legislature’s purpose," his decision stated.

"Thus, based on the foregoing, the court finds the MMMAA constitutional and organic ... and that it does not violate the fundamental right of access to the courts guaranteed under the Due Process, Equal Protection, and Privileges and Immunities clauses of the Organic Act of Guam and the United States Constitution."