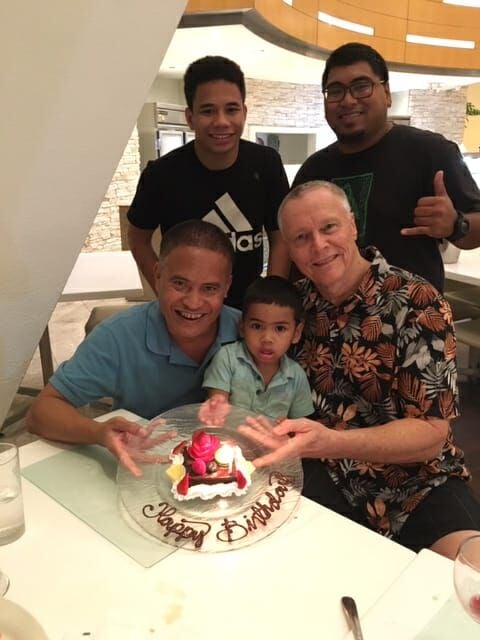 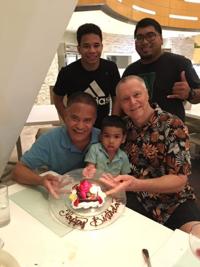 CELEBRATION: Bill Pesch and his family celebrate his husband Corman's birthday at the Westin Resort Guam. Their sons, Brian and Keoni, are shown standing in the back, with grandson Koein front and center. Photo courtesy of Bill Pesch 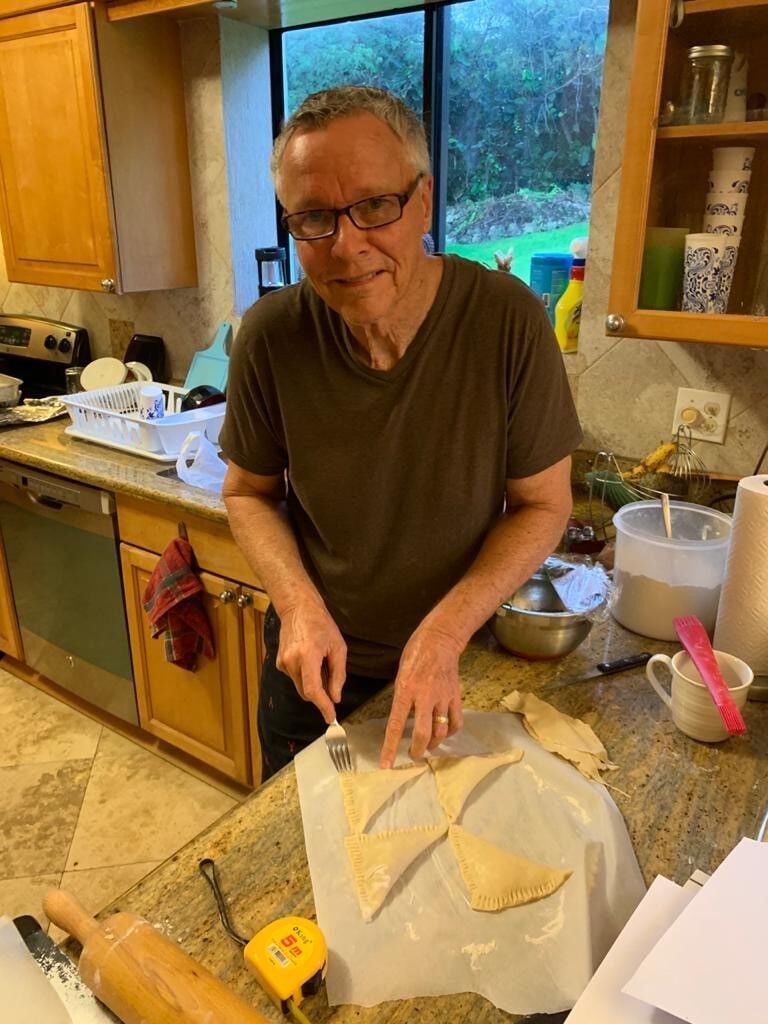 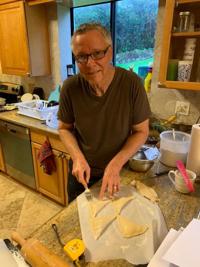 MESS WITH PESCH: Bill Pesch preps apple turnovers using his favorite crust recipe in his kitchen. The family law attorney says baking and cooking are his creative outlet. For the last 16 years, Pesch and his family have enjoyed meals around the dinner table.  Photo courtesy of Bill Pesch 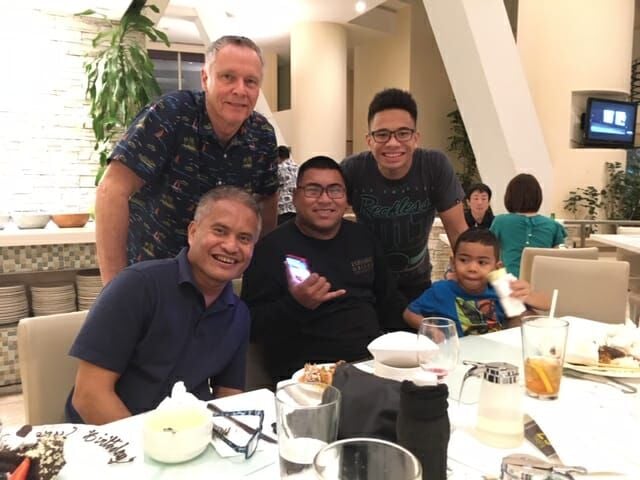 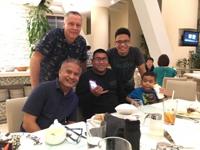 FAMILY CONVERSATIONS: Bill Pesch, standing, stops for a family photo during dinner at the Westin Resort prior to the pandemic. Pesch's husband, Corman, is seated on the left, along with their sons Keoni and Brian and grandson Koein. Photo courtesy of Bill Pesch 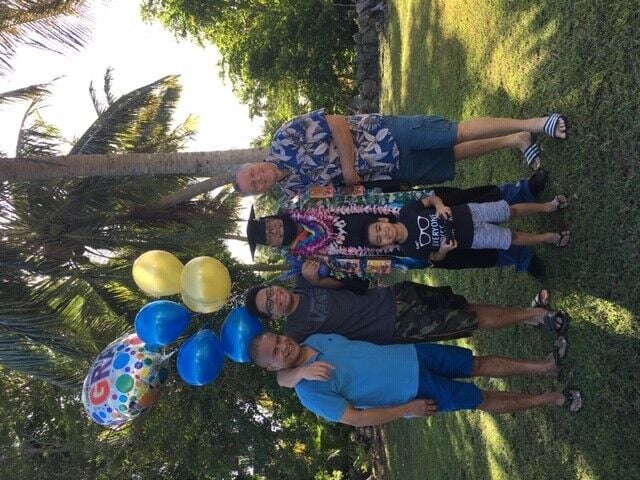 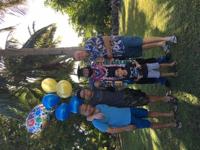 CELEBRATION: Bill Pesch and his family celebrate his husband Corman's birthday at the Westin Resort Guam. Their sons, Brian and Keoni, are shown standing in the back, with grandson Koein front and center. Photo courtesy of Bill Pesch

MESS WITH PESCH: Bill Pesch preps apple turnovers using his favorite crust recipe in his kitchen. The family law attorney says baking and cooking are his creative outlet. For the last 16 years, Pesch and his family have enjoyed meals around the dinner table.  Photo courtesy of Bill Pesch

FAMILY CONVERSATIONS: Bill Pesch, standing, stops for a family photo during dinner at the Westin Resort prior to the pandemic. Pesch's husband, Corman, is seated on the left, along with their sons Keoni and Brian and grandson Koein. Photo courtesy of Bill Pesch

For the past 16 years, Bill Pesch and his husband, Corman, have made it a point that their family have at least one meal together a day.

“It’s something that we did in my family growing up and I’ve read that it is one of the most important things to keep a family together,” said Pesch, a local attorney.

Family meals around the dinner table have been a tradition and one he hopes his children will carry on.

“At least have one meal together a day. Well, certainly with the pandemic seven nights a week. Before that, we would prepare whole meals at last four nights a week and we’d all sit down. Sometimes the boys have other things to do but, generally speaking, we do that several times a week,” said Pesch.

A family law attorney for over 25 years, Pesch has seen the worst of families in hotly contested custody battles and divorces.

“I’ve always considered (family dinners) important but when you see what happens to families when they don’t try to maintain those family ties, it’s a bit scary,” he said. “Sometimes and I’m sure it’s the same for most people. Sometimes, it’s just so much fun and some sort of conversation will begin about some subject and I mean we will just be howling laughing over something. You just feel that bond and that’s neat.”

Pesch said there can also be the opposite times when tempers flare around the kitchen table.

“But at least you’re all sitting there together to work. It’s a good place to share good times and it’s also a good place to improve bad times and bad experiences. You know how to talk to one another because you’re used to having conversations with each other,” he said.

This summer the family was supposed to take their annual monthlong trip to the states for vacation.

Pesch's husband, Corman, and their two children, Keoni and Brian, and grandson, Koein 4, canceled those plans when the coronavirus pandemic hit.

Brian had just graduated from Father Duenas Memorial School and was set to begin classes at the University of Guam. Keoni was attending Guam Community College and was scheduled to take the police entrance exam, but two days before the exam, the island was placed on lockdown, putting everything on hold and he instead stayed home to care for his son, Cohen, 4, as day cares were closed too.

Pesch’s husband, Corman, a school nurse at C.L. Taitano Elementary School suddenly found himself on the front lines, first at the A.B. Won Pat International Airport, screening arriving passengers, and then working tirelessly with a team at the Port Authority of Guam for the clinic there.

“My practice came to a screeching halt for a couple of months with very little business,” the lawyer said. “It’s a scary feeling because you’ve got certain bills that are out there and they're consistent with your rent, utilities and overhead, and those bills don’t stop and so you just kind of have to adapt to the situation.”

The attorney adapted and began teleconferencing with clients and attending online court hearings.

“It’s been an interesting transition and one that I suspect, when all the dust settles after this pandemic, the court may reconsider how it has hearings,” he said.

The lockdown meant more time at home and more time in the kitchen cooking for the family at home.

Cooking and baking have been a creative outlet for the attorney, who jokes, “It’s in my blood and often around my waistline.”

Pesch actually comes from a long line of bakers. His great-great-great-grandfather came from Germany in 1885 and was a baker by trade.

“He moved to the states to Queens, New York, from Germany and he set up a bakery. My dad, who, at the height of his career was the director of the Air National Guard, he was a two-star general at the Pentagon. He was an avid baker. He was always baking something. I think he got me interested at a young age for baking,” Pesch said proudly.

Before the pandemic, Pesch and his family normally had family dinner together several times a week and would go out to a restaurant here and there. He relied on 10 to 15 family-tested and approved recipes. After a few weeks of the recycled recipes, Pesch realized those meals were no longer family favorites.

“When you’re only making two or three meals a week, that’s OK, but when you’re making 10-15 meals a week instead. and you keep repeating those meals over and over again, the kids get a little tired and they’re looking for something new. That’s when it really hit me that I need to expand my recipes,” he said.

So he looked to Google and reached out to friends, asking them to share recipes and hoping to expand his meal options.

“Cooking is not usually a chore. It’s something we both really enjoy doing. So when I leave work, if it’s my turn to make dinner, what am I going to make or maybe I’ve thought about it before. I’m excited. When I get home, I’ve changed and the first thing I do - I’m in the kitchen. For me it’s a creative outlet,” said Pesch.

He’s hoping his love for the kitchen gets passed on to his grandson who has made more visits to help his “pop pop” in the last few months.

“He’s at the age where he wants to help and sometimes it’s a curse, but you want to encourage it,” Pesch laughed. “I can see that spark and if I play my cards right, I think I could get him excited about it too — the kitchen.”

“My family is multicultural. I’m solid haole. Corman is from Palau. The boys -they’re part Chamorro and Samoan. We’ve just got a mixture,” he said.

In the past, Pesch would prepare the western meals like spaghetti and hamburgers while Corman would cook more foods with island flavors.

“We no longer follow those rigid borders,” stated Pesch.

The lockdown has given him time to experiment in the kitchen and try new flavors, such as chicken tikka masala, which turned out to be a hit.

“We try to switch it up a little, and that’s worked out good,” he said. “There’s been some flops, but not that many.”

His grandson isn’t so easily swayed and, like every parent and grandparent, Pesch tries creative ways to hide the vegetables and convince Cohen to eat what’s good for him.

The family has made a game out of family dinners.

“We started making this process. I would make the main meal or whatever, I would ask them to rate from 1 to 10. 1 is yuck and 10 is fantastic,” he said. “I kind of made a game out of it.”

The recipes that score above 8.5 graduate to Pesch’s recipe book. The others, well, they likely won’t see a second round in his kitchen. And if the score doesn’t tell him, the food sitting for a couple of days tells him all he needs to know.

“We seldom have leftovers for dinner, definitely for lunch. A lot of dishes, they’re better the next day, because they absorb the flavors."

So Pesch started a column in The Guam Daily Post, Making a Mess with Pesch - the 52-week recipe challenge, that publishes every Thursday.

“Here I am, I have 15 or so recipes that I use. My family is getting tired of the same things over and over again. I thought I’m not the only one in this boat. Let’s help each other,” he said.

A love for cooking

His hope for the column is readers will share their recipes and, by the end of the year, people will have 52 weeks of recipes and he hopes it will result in more people getting back to prioritizing family dinners and the important dialogue that can happen at the kitchen table.

“I think, as a result of this pandemic, the boys are a lot more aware of how the world runs or doesn’t run. The good side of the pandemic situation is it’s making everyone, especially young people, aware of how interrelated so many factors in our society are. And if something goes haywire in any aspect, it throws everything off,” he said. “I’m just hopeful that as they go forward, they have a much wider perspective of what it takes to have a civil society that runs well and that starts at the family level and then spreads out from there.”

“I’ve always considered (family dinners) important but when you see what happens to families when they don’t try to maintain those family ties, it’s a bit scary. ... Sometimes, it’s just so much fun and some sort of conversation will begin about some subject and, I mean, we will just be howling laughing over something. You just feel that bond, and that’s neat.”

Editor's note: The Guam Daily Post team sought out responses from members of the community, asking them to share what I Nina'I, or the gift, h…