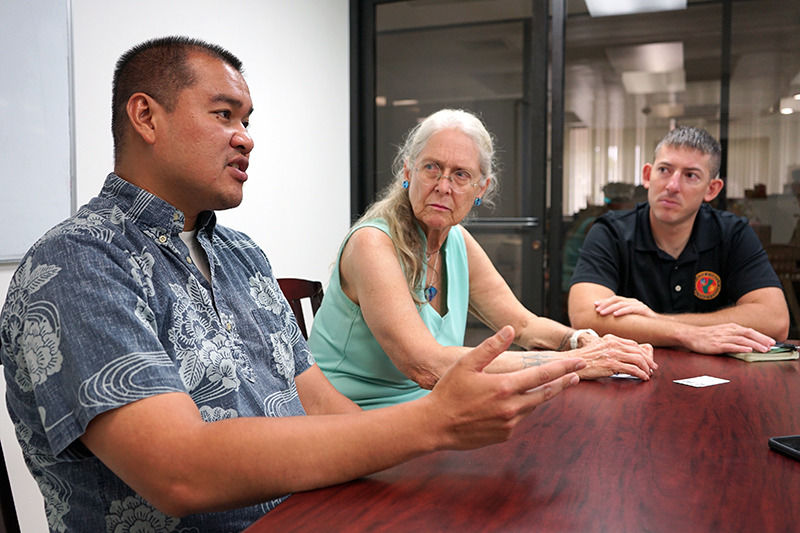 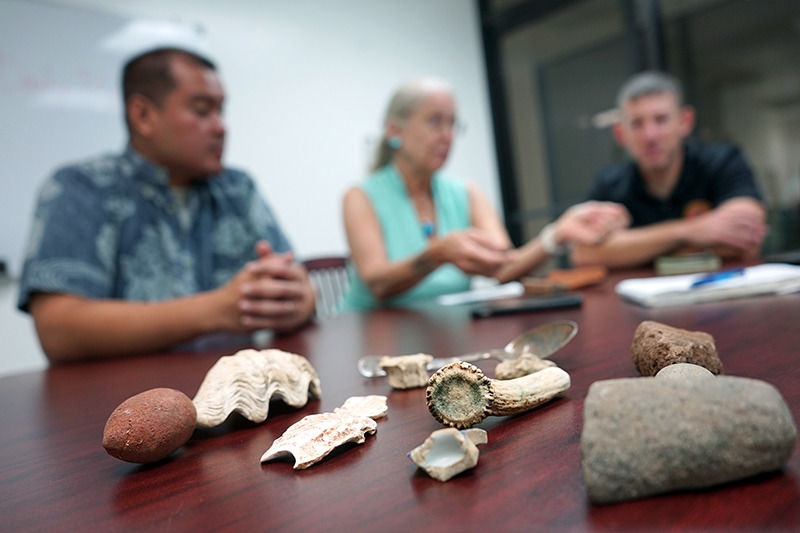 ARTIFACTS: Most of the historical artifacts found at roughly nearly 60 locations across the range complex have been left in place. Artifacts have only been retrieved at 14 locations for preservation elsewhere, said Marine Corps Activity Guam archaeologist Sandra Yee. Haruo Simion/The Guam Daily Post 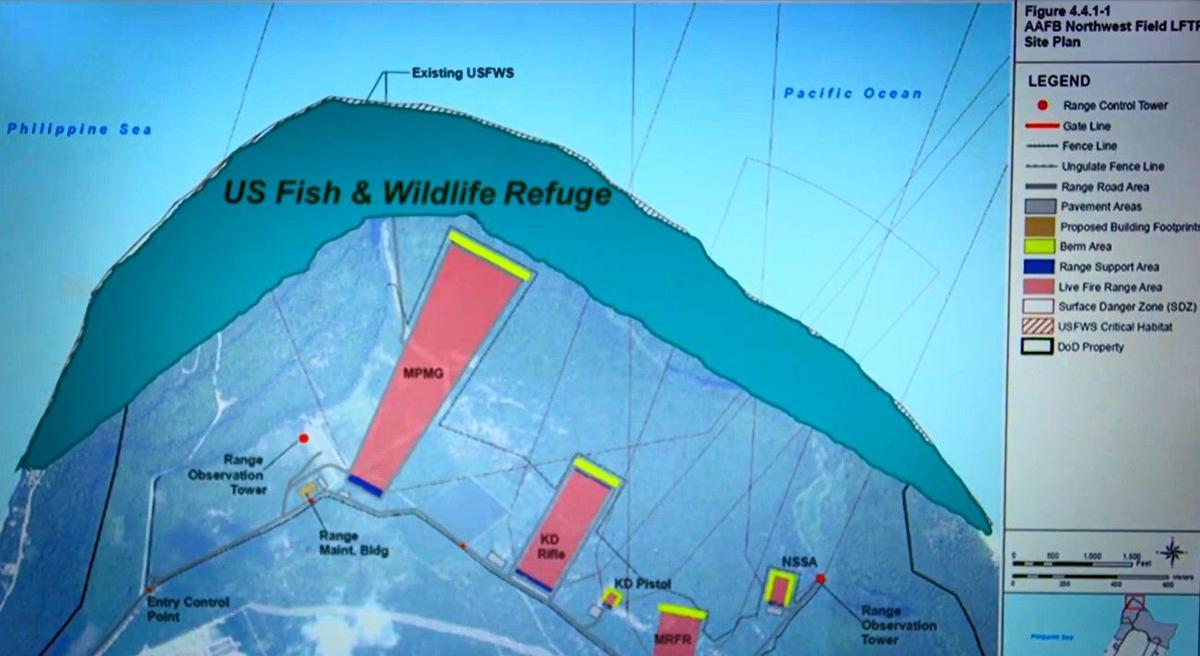 SITE PLAN: A controversial resolution calling for a pause in construction on the live fire training range complex was advanced to the voting file Thursday. Image courtesy of Marine Corps Activity Guam

ARTIFACTS: Most of the historical artifacts found at roughly nearly 60 locations across the range complex have been left in place. Artifacts have only been retrieved at 14 locations for preservation elsewhere, said Marine Corps Activity Guam archaeologist Sandra Yee. Haruo Simion/The Guam Daily Post

SITE PLAN: A controversial resolution calling for a pause in construction on the live fire training range complex was advanced to the voting file Thursday. Image courtesy of Marine Corps Activity Guam

Most of the limestone forest across Northwest Field, where construction of a firing range complex is underway, will be preserved. And for every acre of land that is developed another acre must be restored, according to Albert Borja, the environmental director for Marine Corps Activity Guam.

Most of the historical artifacts found at the roughly 60 locations across the range complex have been left in place. Artifacts have only been removed from 14 locations for preservation elsewhere, said Marine Corps Activity Guam archaeologist Sandra Yee.

Borja and Yee, along with Marine Corps Communication Officer 1st Lt. Brett Lazarof, sat down with The Guam Daily Post recently to talk about what they're doing to preserve the environment and protect the island's cultural heritage during the construction of the firing range complex.

Lay of the land

To begin with, Northwest Field is not a sacred untouched landscape. Large tracts of Northwest Field and its limestone forest have been damaged by war and invasive species.

Lazaroff points out that the area was bombed by American forces when it was occupied by the Japanese during World War II. It was a battleground during the liberation and then converted afterward by the Air Force, which used it as a base for B-29s to bomb Japan. Remnants of the war are among the artifacts being found now.

The brown tree snake, rhino beetle and other invasive species have done damage here, as elsewhere. Wild pigs and deer have beaten broad paths through the brush.

Borja said the entire complex will be fenced off and the deer and pigs left inside will be eradicated.

As for the impact on indigenous species such as the Mariana Fruit Bat, Borja said, "We consulted with the Fish and Wildlife Service and they determined that the noise and the associated 'stressors' as they call it, will not jeopardize the existence of listed species."

More than half of the 700-acre range complex will remain undeveloped.

The five firing ranges and the accompanying structures and access roads to them will take up 315 acres, of which 89 acres of limestone forest will be cut down.

"The rest will be preserved," said Borja.

In addition, as required by their agreement with the U.S. Fish and Wildlife Service, for every one of the 315 acres being developed, including the 89 acres of limestone forest, the Marines must restore an equal number of acres back to as near their natural state as possible.

Overall, at both the firing range complex and the Marine Corps barracks and base under construction in Finegayan, Borja said "the military will restore 1,000 acres of forest habitat as part of the forest enhancement project."

Recovery vs. preservation in place

Sandra Yee had been walking the jungles of Guam for years as an archaeologist in the private sector when she first began survey work in preparation for the buildup. She is now one of two full-time archaeologists with the Marine Corps Activity Guam office.

One of the principal concerns raised by activist groups and Guam lawmakers is the removal of artifacts from the locations where they were found for preservation elsewhere. They've argued artifacts should be preserved in place.

Artifacts have only been recovered "within the footprint of areas that we knew were going to be ground disturbed," said Yee. "There were 14 sites up at the range that were data recovered out of about 60 sites across the area."

The location of the various firing ranges have been "rearranged to avoid cultural sites," said Yee. The removal of artifacts has taken place only in cases where the layout of a firing range could not be reconfigured.

Yee also points out that the recovery of artifacts involves a lot more than picking up what's found and taking it away.

"Data recovery" means a comprehensive survey of the site is conducted. A GPS device is used to record the location of anything of significance. Features like underground ovens are excavated and photographs are taken "so that we have a three-dimensional picture when they're done."

The artifacts recovered from those 14 locations will be preserved in the cultural repository being built with federal funds at the University of Guam.

More than a dozen local and federal agencies are overseeing construction activity at the firing range complex.

"There is an alphabet soup of regulatory agencies," said Borja.

The Programmatic Agreement signed by the military and the government of Guam "only defines our obligations to protect cultural resource management," said Borja.

The Marines are also bound by the requirements imposed by the U.S. Environmental Protection Agency and its local counterpart, the U.S. Fish and Wildlife Service, the Guam State Historic Preservation Office, the National Parks Service and the Guam Coastal Management Program, among other agencies.

"There is a myriad number of documents that govern the work that we do. We have to comply with upwards of 150 measures that we've agreed to," said Borja.

Are there other Guam laws in the books created by mistake?