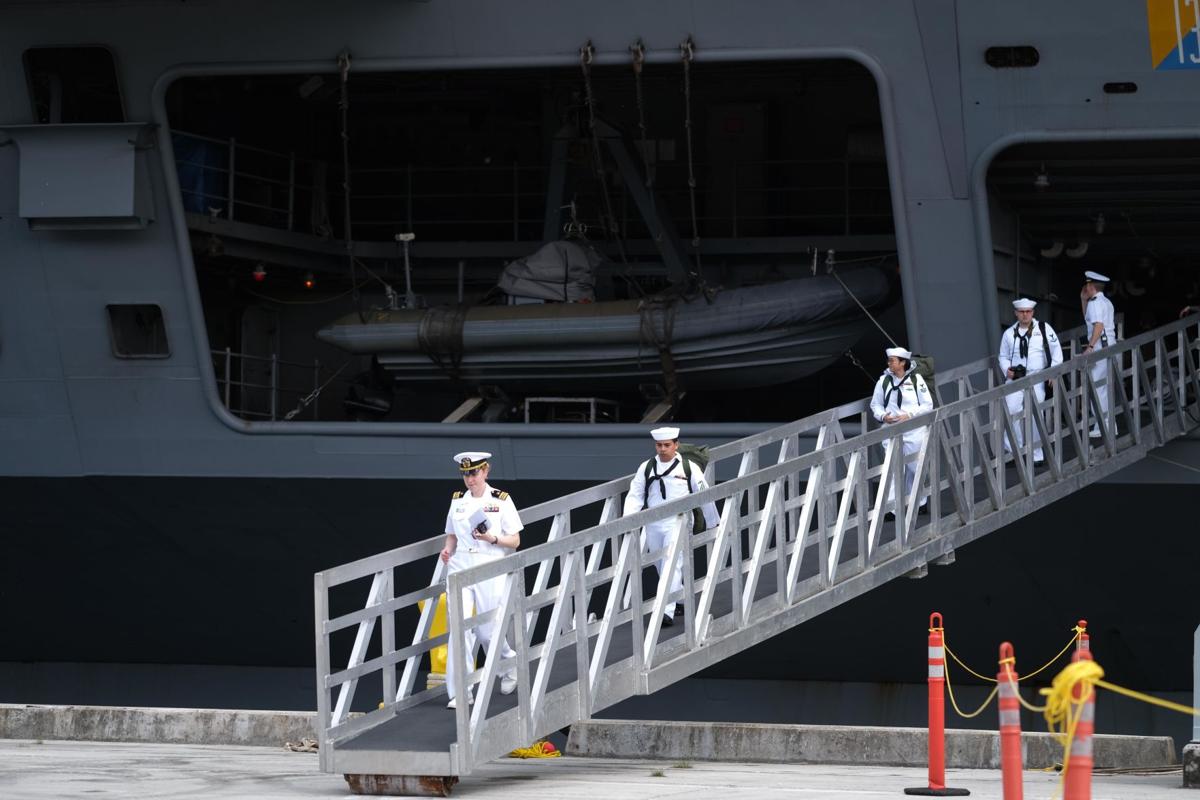 PAST VISIT: Sailors aboard the USS Theodore Roosevelt disembark during a prior port call to Guam on Feb. 7. The aircraft carrier returned to Guam on March 28 after a visit to Vietnam and training exercises in the Philippine Sea. Norman M. Taruc/The Guam Daily Post

Some of the USS Theodore Roosevelt's sailors who will test clear of COVID-19 will be quarantined in unnamed Guam hotels as military officials work to decontaminate the aircraft carrier and separate them from sailors who have fallen ill from the rapidly spreading virus.

During a press conference Wednesday morning, Gov. Lou Leon Guerrero confirmed she agreed, under certain restrictions, to allow sailors off the aircraft carrier and into strictly guarded and monitored hotels off the Navy base because it's the humane thing to do.

“Throughout our response to COVID-19, I promised each of you that I would undertake any action necessary to keep the people of Guam safe. For this reason, I have agreed to allow the restricted housing of sailors who have tested negative for COVID-19,” she said. “In partnership with the Guam Hotel and Restaurant Association, public health officials and representatives of the Navy, only sailors testing negative for COVID-19 will be housed in vacant Guam hotels ... subject to a 14-day quarantine period enforceable under the Uniform Code of Military Justice.”

Adm. John Aquilino, commander of the U.S. Pacific Fleet, spoke with international media during a conference call Wednesday morning prior to the governor’s 1 p.m. press conference.

Aquilino declined to provide an update on the number of sailors who have tested positive. Certain national media outlets have reported there were at least 100 sailors infected with the new coronavirus. The Navy has stopped confirming the breakdown of military personnel with COVID-19 to Guam media since a recent Pentagon memo forbade the release of information that could compromise operational security.

The governor noted that strict quarantine protocols must be met, including daily medical checkups, military security on every floor and at all points of entry and beaches being kept off-limits to those in quarantine. Hotel workers will be provided with personal protection gear from the military.

“We have an interest in protecting our community and stopping the spread of COVID-19 just as much as the military has an obligation to return the USS Roosevelt to the open ocean to protect Guam and the region,” the governor said.

Leon Guerrero noted there will be people who oppose her decision, but she warned that this isn’t the time for an “us vs. them” mentality and that some of those sailors are sons and daughters of Guam.

“They sat at King’s with friends on a Friday night. They graduated from places like Simon Sanchez and (George Washington High schools). They are our nieces, our nephews, our sons and our daughters. And we can protect Guam while being humane to them. That is the Guam I know, and we will not abandon who we are out of fear,” she said.

Speaker Tina Muña Barnes, in a statement supporting the governor’s decision, said 20 of Guam's sons and daughters are assigned to the aircraft carrier. Barnes said in her discussions with the military's Joint Region Marianas she was assured that military facilities, including bachelor quarters and recreation centers, would be utilized before sailors are moved to local facilities.

Sen. Sabina Perez said she was “troubled” that the military wanted to utilize local facilities to house sailors who may have been exposed to the virus that causes COVID-19. She offered proposals that “protect the health and safety for both the crew and our island community.”

She recommended the military mobilize medical resources and that the president utilize the Defense Production Act to spur the manufacturing of needed medical supplies.

She also urged the Navy to “evacuate nonessential staff from the USS Roosevelt in order to decontaminate the ship,” and for local military leaders to create quarantine areas on Naval Base Guam, which is 38,000 square acres. She said such facilities would eliminate exposure to the base and civilian community.

The local group I Hagan Famalåo’an Guåhan also voiced concern at the governor’s decision, saying even with the safety precautions in place, there’s still a danger to the local community.

“While only those who test negative will be moved to Tumon, it is still risky considering how contagious the virus is. Being negative today doesn’t mean that they won’t be in a week or so,” the organization said. “The decision to house them in the middle of our community is playing a game of chance with the health of our people. We urge Gov. Leon Guerrero to reconsider her decision, as the people of Guåhan should be her first priority. Our health care systems are already strained and we need to protect them.”

Rear Adm. John Menoni, commander of Joint Region Marianas, said the military is developing a plan as to how many sailors will be brought to Tumon hotels.

"The plan is to remove as many people off the Theodore Roosevelt as we can, understanding that we have to leave a certain amount of folks on board to do the normal standing watch duties to keep the ship running," he said.

"That doesn't mean that all of those people will be brought out to local hotels in the community. It means we'll work with the government of Guam, the Guam Hotel and Restaurant Association, and within our fence lines to appropriately house all of those sailors within (Centers for Disease Control and Prevention) guidelines."

About 40 medical professionals from the 3rd Marine Expeditionary Force Medical Battalion will arrive in the next day or two. They will help the carrier sailors, build capacity at Naval Hospital and backstop capacity within the government Guam.

"The biggest reassurance I can give you is that all the sailors being transferred off Naval Base Guam ... into Tumon will have a negative COVID-19 test," Menoni said, adding the sailors will be monitored by military security around the clock for the 14 days.

Aquilino said the military has been in discussion with the governor as they work toward the capacity to isolate and quarantine.

“There’s never been an intent to take all of the sailors off the ship. If that ship needed to respond to a crisis today, we would respond.”

National media reported that some of the sailors had been housed in a gym on the Navy base and were sleeping on cots.

The 7th Fleet commander held the press conference after the San Francisco Chronicle first reported of a letter written by Capt. Brett Crozier indicating 100 sailors on the aircraft carrier had been infected with the coronavirus and described the spread of the disease as “accelerating.”

“Removing the majority of personnel from a deployed U.S. nuclear aircraft carrier and isolating them for two weeks may seem like an extraordinary measure. ... This is a necessary risk,” the warship's captain wrote, in the letter published by the San Francisco Chronicle. “Keeping over 4,000 young men and women on board the (Theodore Roosevelt) is an unnecessary risk and breaks faith with those sailors entrusted to our care.”

When the first group of sailors on the Theodore Roosevelt fell ill to COVID-19, some were airlifted to Naval Hospital Guam for immediate assessment and care, and the aircraft carrier eventually pulled into port on Guam on March 28.

In Wednesday's press conference, Aquilino said the possibility exists that the contagion occurred during the aircraft carrier’s recent port visit in Vietnam in early March, but an analysis is underway.

"The Navy is no different than the rest of our people in the United States, and we are susceptible the same as anyone. The focus on the health and care of the force is what I am spending pretty much 23 hours a day on to ensure that the ship, the strike group, the 7th Fleet all have exactly what they need to execute this plan," Aquilino stated. "At the end of this plan, we will spit out a warfighting aircraft carrier just so we're all aligned. We will execute missions if need be today in time of crisis."