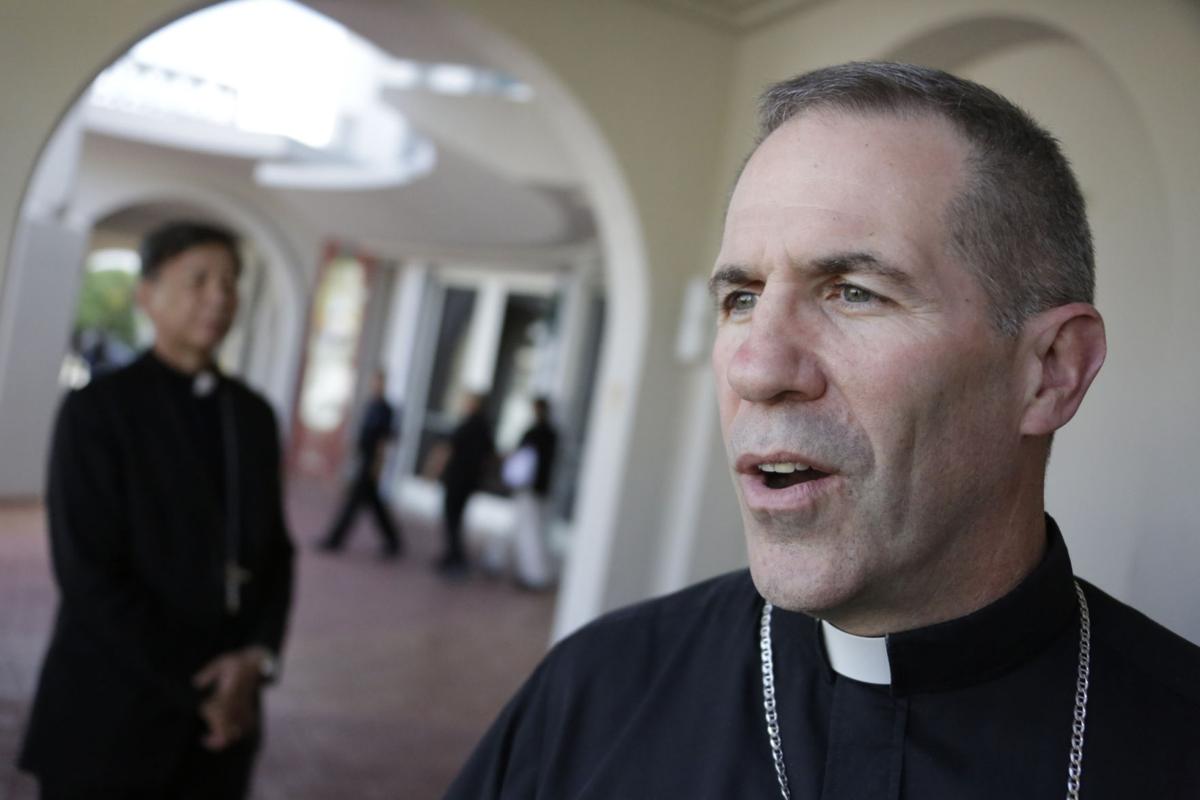 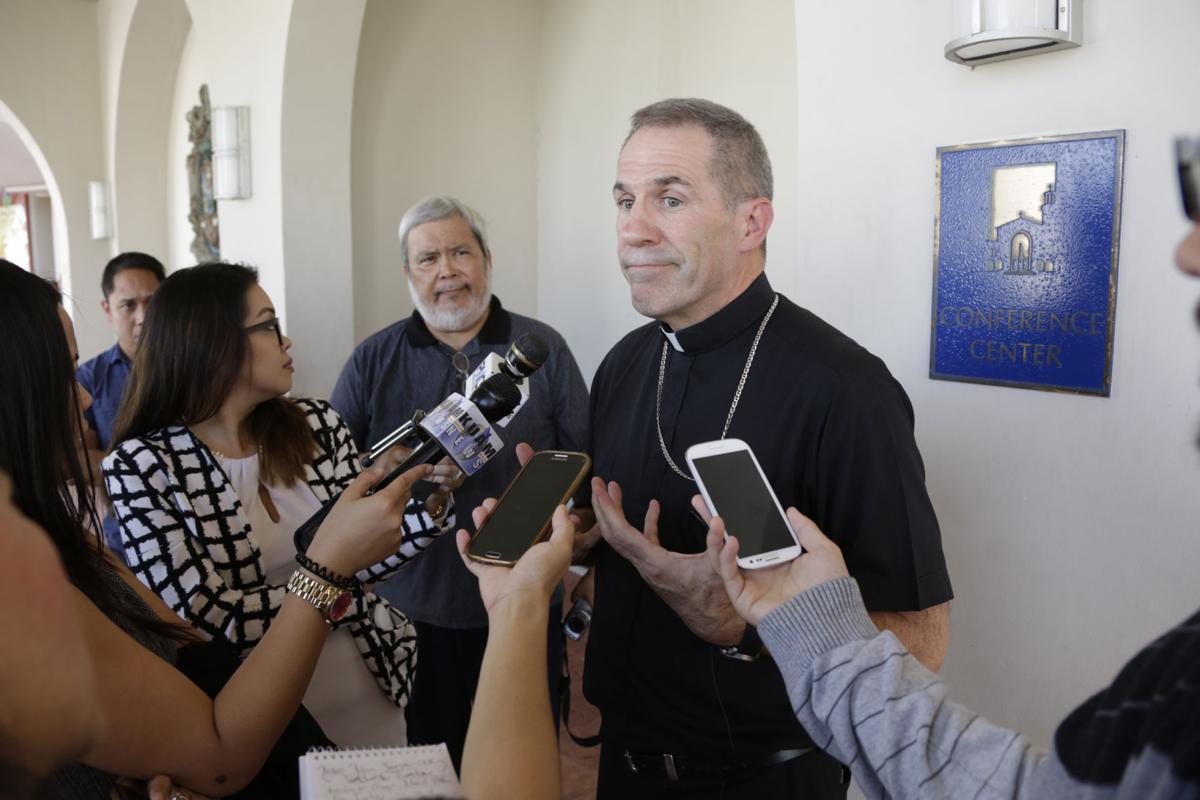 During his first public address to local media, newly-appointed Coadjutor Archbishop Michael Byrnes said he was excited to take his first steps on Guam upon seeing the lights from his airplane vantage point early that morning.

Byrnes arrived on Guam around 1 a.m. Monday morning and, after a short respite, took to work immediately with a Mass of recollection with Catholic clergy at 11 a.m. and a press conference with local media.

Around 1 p.m., Byrnes greeted media representatives stating he felt it necessary that he come to Guam ahead of the official start of his ministry so he can come to better know his new home.

Byrnes is scheduled to remain on Guam for three weeks, after which he will return to Detroit until he makes the permanent transition to his new post as coadjutor archbishop for the Archdiocese of Agana.

Byrnes told media that the Holy Father wanted him to focus on healing and unifying the divides within the Catholic Church. Byrnes added that he had been instructed by Cardinal Fernando Filoni to serve as a bridge between the highly polarized communities within the archdiocese so as to solidify unity.

Byrnes added that Filoni, as the prefect of the Congregation for the Evangelization of Peoples, is something like his superior and that he reports to Filoni.

According to Post files, Filoni played a role in the recent controversy surrounding the Redemptoris Mater Seminary property in Yona. When asked about a recent failed visit to the Yona seminary by members of the Laity Forward Movement during a Sept. 20 press conference, Rev. Jeff San Nicolas reported an exchange between himself and the acting rector of RMS Monsignor David Quitugua:

"The intent of Msgr. David’s letter was now clear to me. Neither I nor (Apostolic Administrator Archbishop Savio Hon Tai Fai) is the church authority over decision-making regarding the Redemptoris Mater Seminary, even over simple matters such as who can visit," San Nicolas read. "Cardinal Filoni is in charge."

Since then, Byrnes has taken actions to address concerns over the property and amended certain legal documents clarifying that the Archdiocese of Agana is in fact the sole governing body in regard to the Yona property.

The new coadjutor archbishop comes to Guam at a time of great controversy for the island's largest faith group as it continues to reel from suit after suit accusing Guam's clergymen of child sexual abuse from decades ago. Chief among those accused stand Archbishop Anthony Apuron and former Guam priest Rev. Louis Brouillard. As of yesterday, Apuron faces four accusations of child sexual abuse from former altar boys who served at the Agat Parish in the 1970s where Apuron ministered at the time. Brouillard, with the addition of yesterday's filing of a complaint by Anthony Vegafria, faces five similar accusations from his time serving at different parishes around the island.

Byrnes reported that he has previous experience with helping communities who have been witness to such claims, and added that he hopes to meet with the victims who have come forward so far.

"I've dealt with removing a priest from a parish because of accusations (of child sexual abuse) and ... the aftermath of bringing that to the parish community to help them navigate through the confusion and wondering," he said.

Byrnes was appointed by the pope to serve in place of Apuron, whose exact location remains unknown while undergoing a canonical trial in Rome.

Byrnes admitted to the media that he was not an expert in ecclesiastical law but that he was aware the proceedings were underway.

"I don't know how the whole canonical trial thing works, but I know that the tribunal has been established," he said. "I'm not a canon lawyer."

He added that he had recently spoken to Apuron at the U.S. Conference of Catholic Bishops in Baltimore this past November, and that they had had a "cordial" talk that did not delve too deeply into particulars of the current situation on Guam.

In response to questions about the Neocatechumenal Way, Byrnes said he would continue to allow the NCW to operate within the local parishes.

"The Neocatechumenal Way is a movement within the church that's been highly valuable throughout the world, so I don't think it's a question of removal in any sense," he said.

Byrnes commented that the current polarization within the church was caused in part by Apuron's close alignment with the NCW and the benefits that Apuron reaped from that association.

In regard to the use of the former Hotel Accion property in Yona by RMS, an NCW-based seminary, Byrnes said he would need to review the articles of incorporation of RMS to determine whether they would be able to continue to host their formation program out of that property.

Archbishop Hon said he liked and approved of the sentiments expressed and actions taken thus far by Byrnes.

“Let this Advent be a door to a new year – to a new era – under the pastoral governance of Archbishop Byrnes.”

When asked about his time on Guam, Hon said he had not worked alone, but that he had accomplished what he did only by the “grace of God” and with the help of both clergy and lay people.

Family violence offenders must be stopped. The community can help by speaking up.

The number of reported family violence cases this year is close to 300, which is nearly the total for all of last year and the year before. Read more

Deciding who guards the guardians

While I won't quote the Latin language, the Roman poet Juvenal in his "Satires" asked, “Who guards the guardians themselves?” In the public se… Read more