PAUSE SUPPORT: There was overwhelming support for an indefinite pause in construction of the live-fire training range complex during a public hearing on Resolution 164-35 Wednesday at the Guam Congress Building. Image taken from legislature's YouTube channel 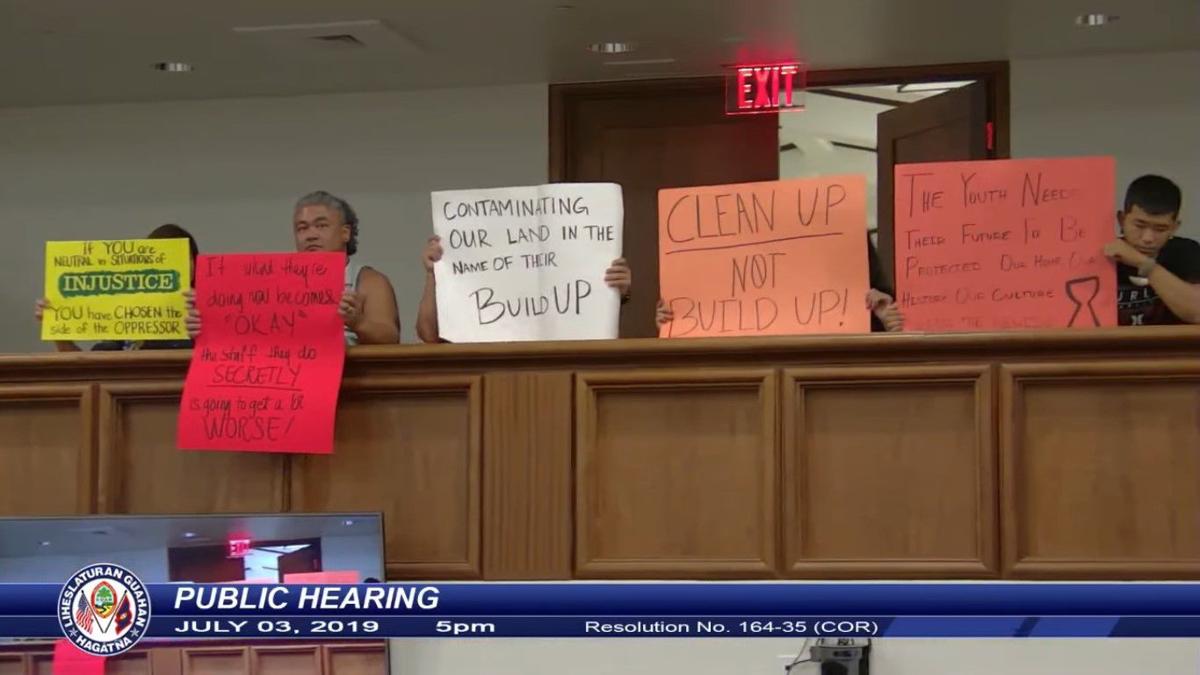 SUPPORTERS OF PAUSE: Supporters of the resolution to pause military construction hold signs in the Legislature. Image taken from Legislature's YouTube channel 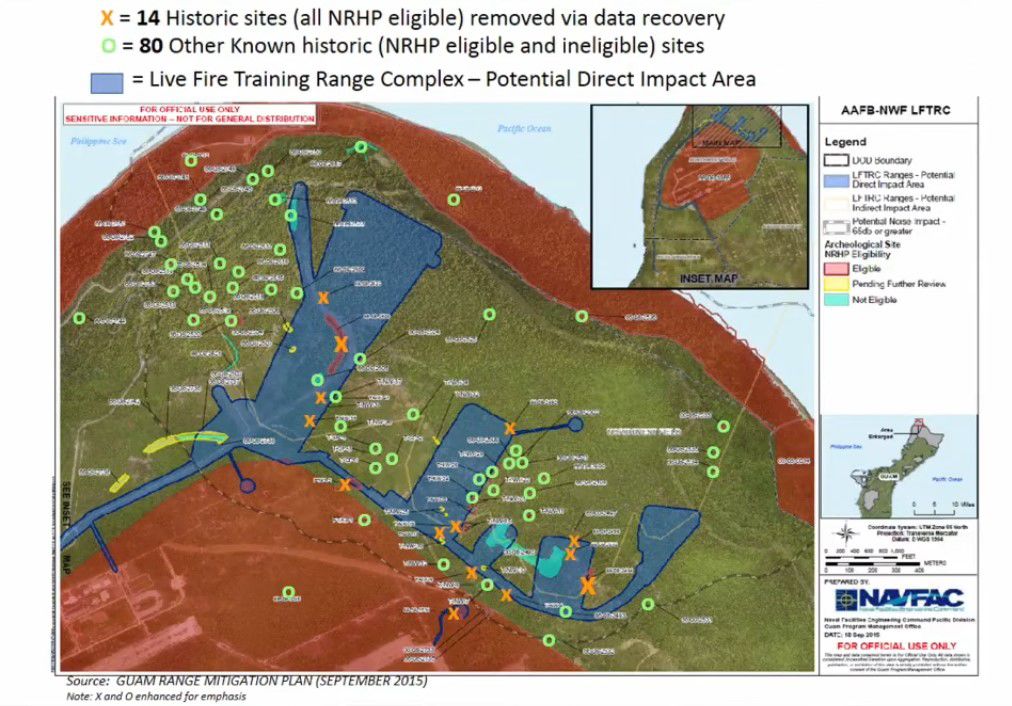 PAUSE SUPPORT: There was overwhelming support for an indefinite pause in construction of the live-fire training range complex during a public hearing on Resolution 164-35 Wednesday at the Guam Congress Building. Image taken from legislature's YouTube channel

SUPPORTERS OF PAUSE: Supporters of the resolution to pause military construction hold signs in the Legislature. Image taken from Legislature's YouTube channel

There was overwhelming support for an indefinite pause in construction of the live-fire training range complex during a public hearing on Resolution 164-35 Wednesday at the Guam Congress Building.

The resolution was introduced June 24 by Sen. Telena Nelson and endorsed by 13 of Guam's 15 senators.

It urges Gov. Lou Leon Guerrero to use her influence to convince the military to halt all construction activities related to the firing range complex on Northwest Field at Andersen Air Force Base.

The governor has endorsed a pause in the immediate area where artifacts and an endangered tree have been found. The military has said it has already done that.

The senator emphasized that her resolution addresses only the firing range complex.

"Perhaps our programmatic agreement needs to be readdressed. Perhaps we need to readdress the approach and take a better path that protects our island and its natural resources and the people of Guam."

The programmatic agreement was signed by the military and the government of Guam in March 2011. The military maintains it has followed the agreement and Guam senators have not disputed that.

In the days ahead, Nelson said her staff will be working on ideas to revise the programmatic agreement, which establishes legally binding rules for the preservation of Guam's environmental and cultural heritage at military buildup sites.

"There has been no substantive information presented, other than that which is generated by mainstream media propelling the Guam Chamber of Commerce position, that the buildup is good for the island and its economy," said Lisa Natividad, an associate professor in the Division of Social Work at the University of Guam and the president of the Guahan Coalition for Peace and Justice.

Natividad questioned the polling done by the Guam Chamber of Commerce showing that nearly 70% of island residents favor the buildup and 80% think it will create jobs and more tax revenue.

The polling results are "no surprise," said Natividad, "because this is what they've been told by local media and the Guam Chamber of Commerce."

"This does not constitute necessary data and research to evidence that the Guam military buildup benefits our local economy," she said.

Natividad cited a number of studies that she said show the harmful impact of military bases in Okinawa, Subic Bay in the Philippines and Fayetteville in North Carolina.

Victoria-Lola Leon Guerrero, an active member of Independent Guåhan, said she was "incredibly disappointed" by the reaction from the local media to over 26 groups who met with the governor on June 26 in an effort to convince her to support a complete halt in firing range construction.

During that meeting, the governor said she supports the buildup and would not support a complete pause on construction.

"The word 'buildup' is inaccurate, said Victoria-Lola Leon Guerrero. "It is destruction. ... The community has been very clear that this is not what we want."

Former Guam Department of Education board member and senatorial candidate Sedfrey Linsangan was among the few who opposed the resolution. He said the construction activity is creating local employment opportunities.

Chatfield said there have been nine recent discoveries of artifacts and in each case, in accordance with the programmatic agreement, "and in consultation with the SHPO, the contractor, guided by an archaeologist, establishes a high-visibility fence around the area, including a 30-meter (approximately 98 feet) buffer around each site. Further construction that may affect the potential historic property is suspended until an archaeological investigation is completed."

"The vast framework of environmental laws we must abide by is in many ways more stringent on our actions compared to the Government of Guam or private development."

Sen. Therese Terlaje, who read aloud part of Chatfield's testimony, said, "I've heard this language over and over and in the media. I feel like it's really misconstrued."

The admiral is correct, said Terlaje. "They had a process, they looked at the area."

However, her concern is that a large number of unexpected finds continue to be made throughout the firing range complex construction site.

"Clearing continues in all other areas," said the senator, and "we don't know enough." That's why she wants all construction on the firing range complex to stop.

UOG ecologist Else Demeulenaere said she wants to "clarify" why building a live-fire training range would "jeopardize" a "critically endangered Serianthes Nelsonii" tree that has been found within the firing range construction area.

On June 29, Jereid Calaor, a biological sciences technician at the Guam National Wildlife Refuge told The Guam Daily Post that 18 Serianthes Nelsonii, also called fire trees, are in different levels of growth at the refuge in Ritidian.

However in her testimony Wednesday, Demeulenaere, who is the associate director of the Center for Island Sustainability, said the tree found on Northwest Field is "the last adult tree producing seed."

The trees at Ritidian, she said, "will take between five and 10 years before they will produce" seeds.

"Therefore it is important that we keep the last adult tree ... alive as long as possible, because the tree keeps providing seeds."

The contractor has already cordoned off the area around the tree and seedlings are growing within that area, but Demeulenaere recommended expanding the protection zone around the tree and preserving the limestone forest around it, which she said serves as a buffer protecting the tree.

Governor appeals for pause around tree

In a June 26 letter to Rear Adm. Chatfield, Gov. Leon Guerrero asked for a six-month pause on the construction of one of the five firing ranges around the location of the Serianthes Nelsonii tree.

The governor wrote, "I ask that construction at the Multi-Purpose Machine Gun Range be paused until December 2019 when the DNA report (on the tree's ability to reproduce) is expected to be final."