Sen. Sabina Perez has expressed her "strong opposition" to an open burning/open detonation permit at Andersen Air Force Base and is requesting the administrator of the Guam Environmental Protection Agency to prohibit open burning of waste ordnance materials, and for the agency to deny the military an open burning permit. 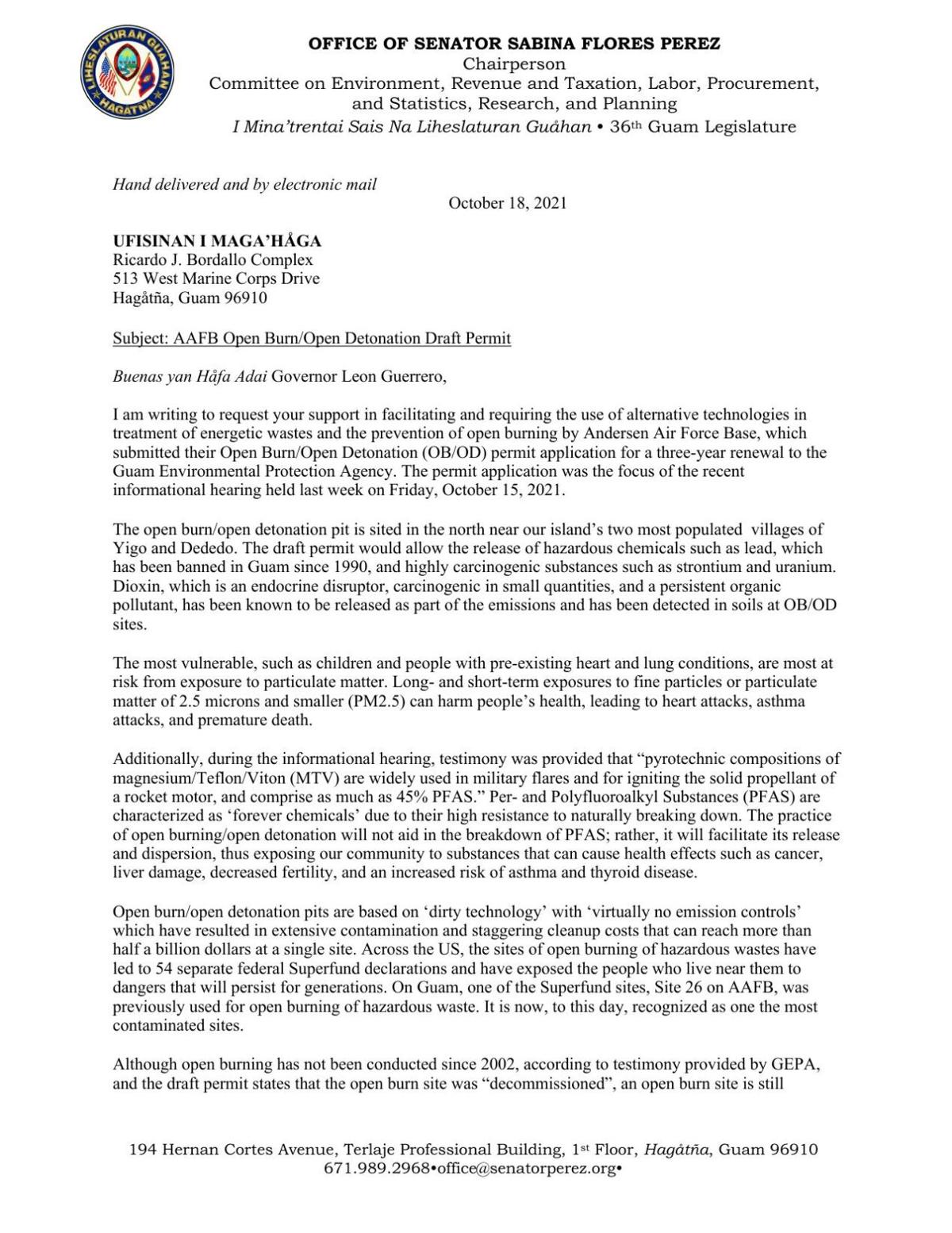 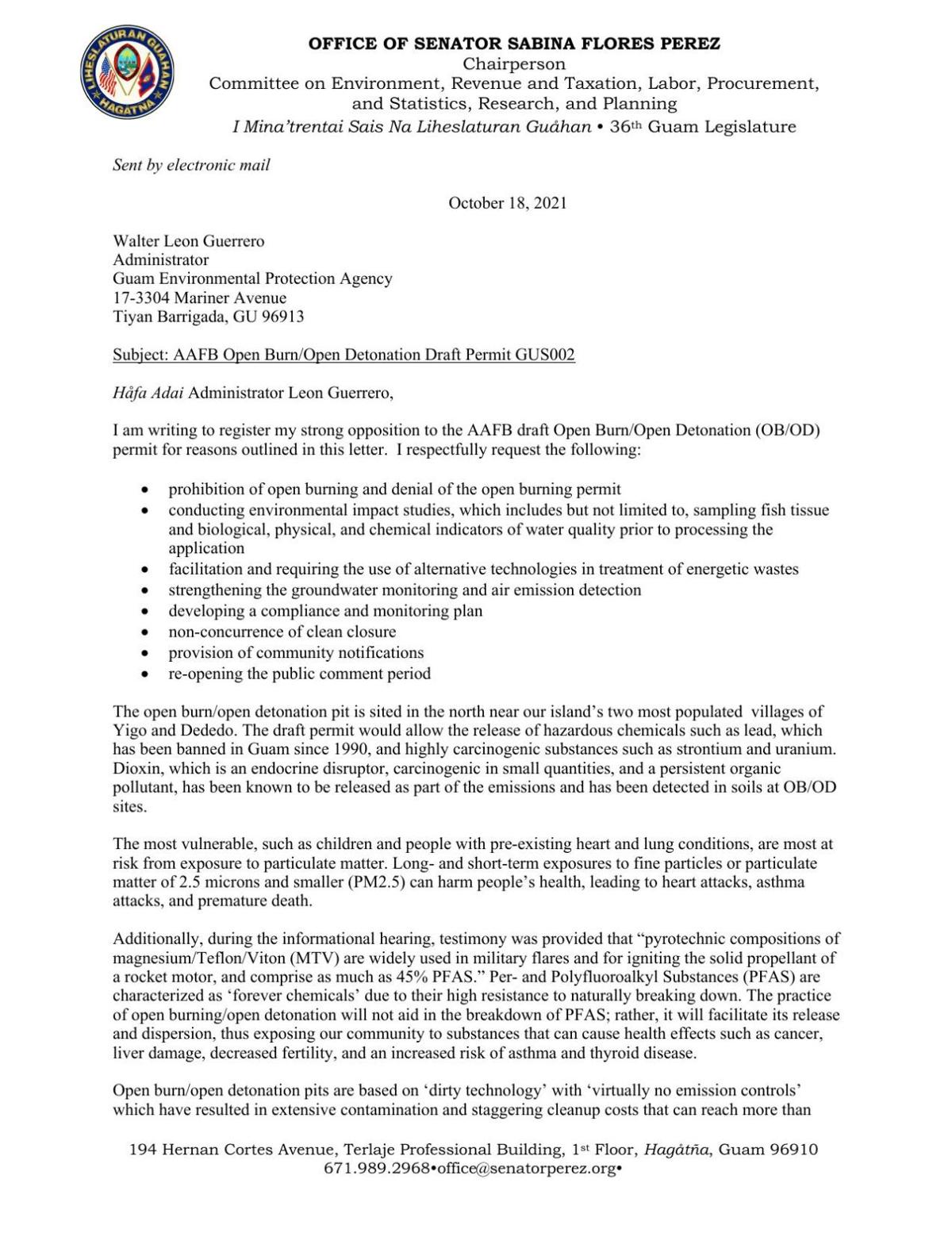 The senator submitted the letter after an information hearing last week on issues and concerns related to open burning and detonation operations.

"The draft permit would allow the release of hazardous chemicals such as lead, which has been banned in Guam since 1990, and highly carcinogenic substances such as strontium and uranium. Dioxin, which is an endocrine disruptor, carcinogenic in small quantities, and a persistent organic pollutant, has been known to be released as part of the emissions and has been detected in soils at OB/OD sites," Perez's letter stated.

The senator also urged the agency to conduct environmental impact studies before processing the permit application, facilitate and require the use of alternative technology in the disposal of ordnance, strengthen groundwater monitoring and air emissions detection, and to reopen the public comment period on the permit application, in addition to other requests.

Guam EPA is currently reviewing a permit application to conduct open burning and open detonation activities at the Explosive Ordnance Disposal range at Andersen AFB. The burn and detonation sites are located at Tarague Beach. The public comment period for a draft permit began around the end of July and ended in mid-September.

The permit is renewed every three years, and while detonations have been taking place, open burning hasn't occurred since 2002.

According to discussions during the information hearing, the current open burn unit - a rusted-out tank - is inoperable and had been decommissioned.

Don Quinata, an environmental health specialist with the Guam EPA, said Andersen AFB submitted drawings in 2018 of a burn pan they intended to manufacture for the use of open burning. However, he said he believed funding is still an issue for the project. An area to the west of the open detonation site has been proposed for the restart of open burning.

"It is critical that open burning not be permitted. Once hazardous chemicals such as per-fluorinated compounds are released, it is much more difficult to clean up. We have only one aquifer that our population relies upon for drinking water. Other communities whose water source has been contaminated in the US have had to rely on a steady supply of bottled water, which is not sustainable. The focus must be on prevention of pollution and contamination of our water, air, and food supply," Perez stated in her letter.

In a separate letter, the senator requested the governor's support in "facilitating and requiring the use of alternative technologies in the treatment of energetic wastes and the prevention of open burning by Andersen Air Force Base."

Perez said the burning and detonating of waste ordnance materials are outdated practices based on "dirty technology" that have caused serious contamination and staggering cleanup costs in the U.S.

"I deeply urge you, as maga’håga, to assist this legislative body in formally objecting to the application and continuation of this Open Burn/Open Detonation Pit and to actively pursue the research, investment and implementation of alternative technologies that will have less of a negative impact to the health and well-being of our island’s people," Perez wrote to Gov. Lou Leon Guerrero.