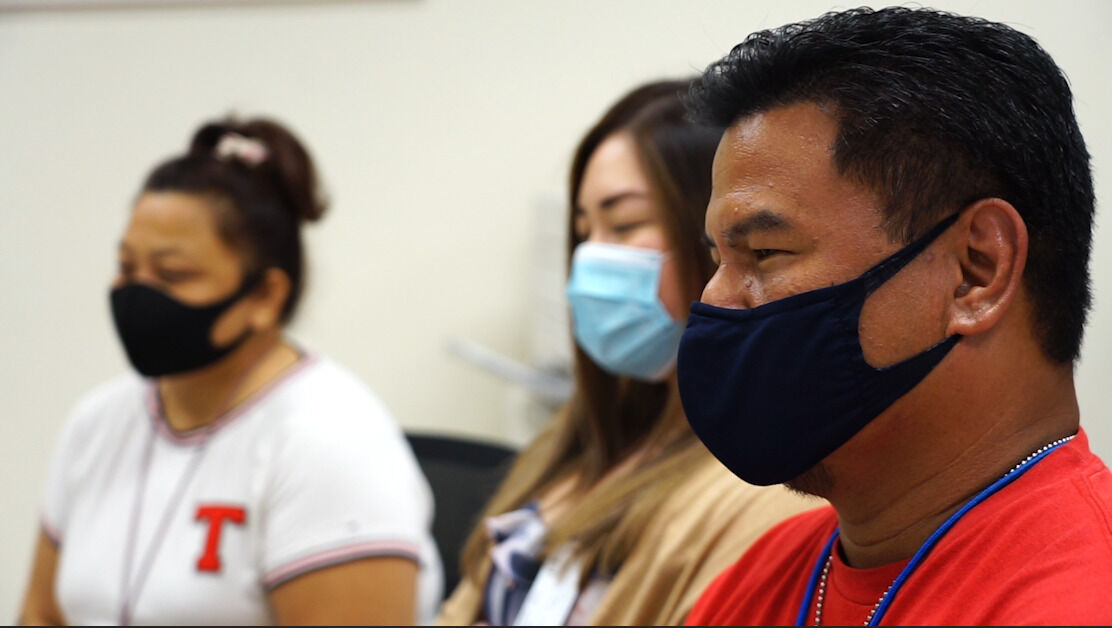 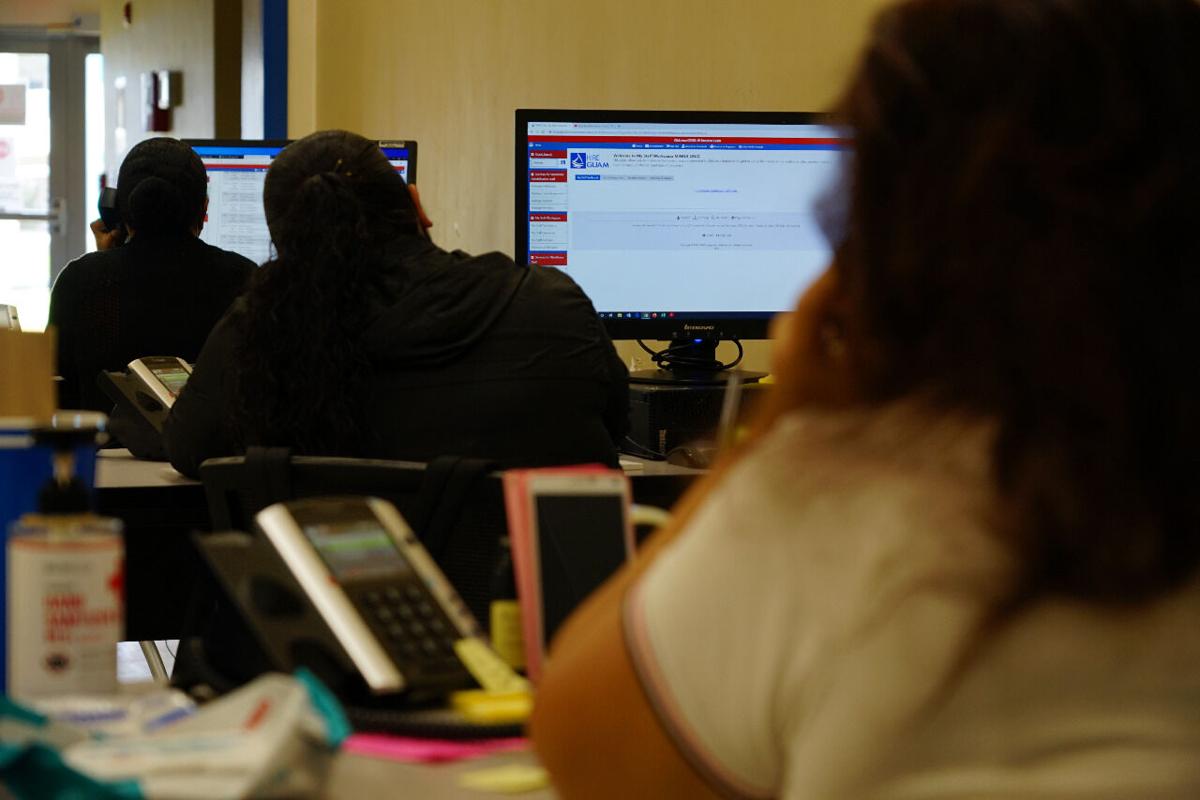 CALL CENTER: The 311 Call Center, which was located at Guam Community College at the time of this photograph on July 31, is busy with phones ringing as thousands of displaced workers seek assistance. Officials said the next payment of unemployment benefits will likely exceed $50 million as concerns about fraud held back the payout of last week's batch. Haruo Simion/The Guam Daily Post

CALL CENTER: The 311 Call Center, which was located at Guam Community College at the time of this photograph on July 31, is busy with phones ringing as thousands of displaced workers seek assistance. Officials said the next payment of unemployment benefits will likely exceed $50 million as concerns about fraud held back the payout of last week's batch. Haruo Simion/The Guam Daily Post

Over the last two months, more than 30,000 people have filed claims for unemployment benefits with the Guam Department of Labor.

And if any one of those thousands called the Pandemic Unemployment Assistance program line at 311, option 6, they may have spoken to one of these customer service representatives: Annabelle Tudela-Borja, Selena Mata or Kin Torre.

They are three of 12 representatives who answer dozens of phone calls each day and try to help local workers displaced by COVID-19 figure out what went wrong with their claim.

“Even before 8 o’clock, the phones are already ringing,” Torre said.

“You answer a call and there’s like 10 more coming in,” said Mata.

So how many calls are they answering? “More than 100, for sure,” Mata said. “If they really want to talk and explain their issue, it can go on for more than 20 minutes.”

And while they try to lend an ear to concerned callers, they can hear the beeps of other calls that are trying to get through as well.

They try to help people understand that the program has specific requirements and processes, which have to be satisfied and followed in order for claims to be processed. And while they’re sympathetic to the circumstances many families face, the system doesn’t change – and if problems arise, it takes time to correct them.

“We definitely have to lend that ear sometimes like if they just need to vent. Or you know some people are just so stuck in their situation that they don’t know what to do. And while we are sympathetic to those people, they still need to understand that this is a process and it needs time,” Mata said.

“There are thousands and thousands of people in the same situation who are calling at the same time. So we really try to stress patience in the nicest way possible, to please be patient.

“Because if I was in their situation I would be just as worked up, just as upset, just as frustrated as them. But we do stress to be patient as much as possible.”

Mata is among those whose job was affected by the pandemic. Torre returned to Guam to take care of his mother who recently died. They both applied to GDOL and were hired for the job.

Mata and Torre were brought into the Guam Department of Labor through the Dislocated Workers grant. David Dell’Isola, director of Guam Labor, said the department received $1.5 million and there were about 200 jobs budgeted – those who were hired are now with Labor and other agencies, including the Department of Public Health and Social Services and Guam Memorial Hospital – for agencies providing COVID-19 relief. He said they tried to match those who applied with jobs that are needed.

Torre said one of the common errors he’s come across is information that wasn’t filled in correctly, whether it was an answer to a question or a mailing address where a residential address should be, or a debit card number instead of a bank account or bank routing number.

For those who’ve already successfully completed their claims, Tudela-Borja said they’re seeing many people who fail to submit the appropriate documents each week – either a note to say they’re still unemployed or a check stub showing they’re still working reduced hours.

Falling through the cracks

They acknowledged the system is less than perfect. There have been a few instance where they get a call and upon review of the claim, everything is in order.

“They’ve uploaded all of their documents ... but for some reason there’s an issue. So I will personally walk it to the team leader ... just so we can get them processed,” he said.

Torre said since he’s started, he’s learned a lot. He’s more accustomed to the system and is getting “better at knowing where to look, what questions to ask to identify the source of an error, which they can then bring to their team leader for correction.”

Venting some of their frustration, Mata said they feel some media coverage and social media comments on PUA make it seem "like we’re out to disqualify people, we’re out to keep you from getting this unemployment money.”

“But we’re people, too. We feel for you. We’re here to help you. I just wanted to touch on that real quick because a lot of times when we answer the phone calls people are seeing us almost like the bad guys,” she said. “They’re like, ‘I can never get through to you guys, you guys are never answering your phones,’ but it's because we’re helping people just like you. Because we are people and we have a heart for these people. We’re not trying to stop you, we’re not trying to cut you off, we’re trying to help you.”

Dell’Isola said he’s trying to get the team more help. There are five people who are going through training and will be joining the call center team soon.

He said for every 10 people he’s hired, about five work out.

He said there are some employees who decide this isn’t the job for them. Or others who are GovGuam employees who are detailed to assist with the program, “They’re like, ‘I didn’t sign up for this. I want to go back to my real job,’” he stated.

He’s grateful for the team he has now assisting displaced workers via phone call. The type of work they do isn’t easy, he said. “They talk to a lot of people who are worried, scared or angry.”

Dell’Isola said at this point, he had thought they’d be downsizing, considering most of the claims would have come at the start of the pandemic; and while they continue to entertain new claims, most of the benefits being paid out would be for people who’ve been a part of the program for a few weeks.

He noted “more than half” of the new claims they’re seeing now, however, are fraudulent claims of people trying to take advantage of the program.

"Unfortunately, these claims take time to identify and weed out – and that’s time away from someone who legitimately needs help,” he said.