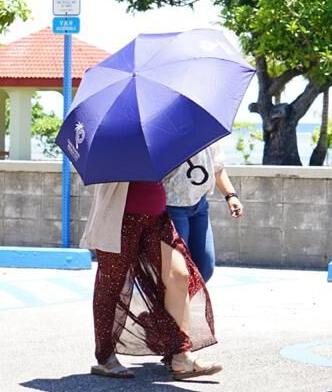 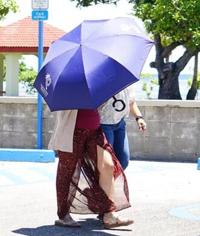 SENTENCING: SNAP fraud defendant Marites Barrogo hides her face underneath an umbrella while walking out of the District Court of Guam on Friday. Haruo Simion/The Guam Daily Post 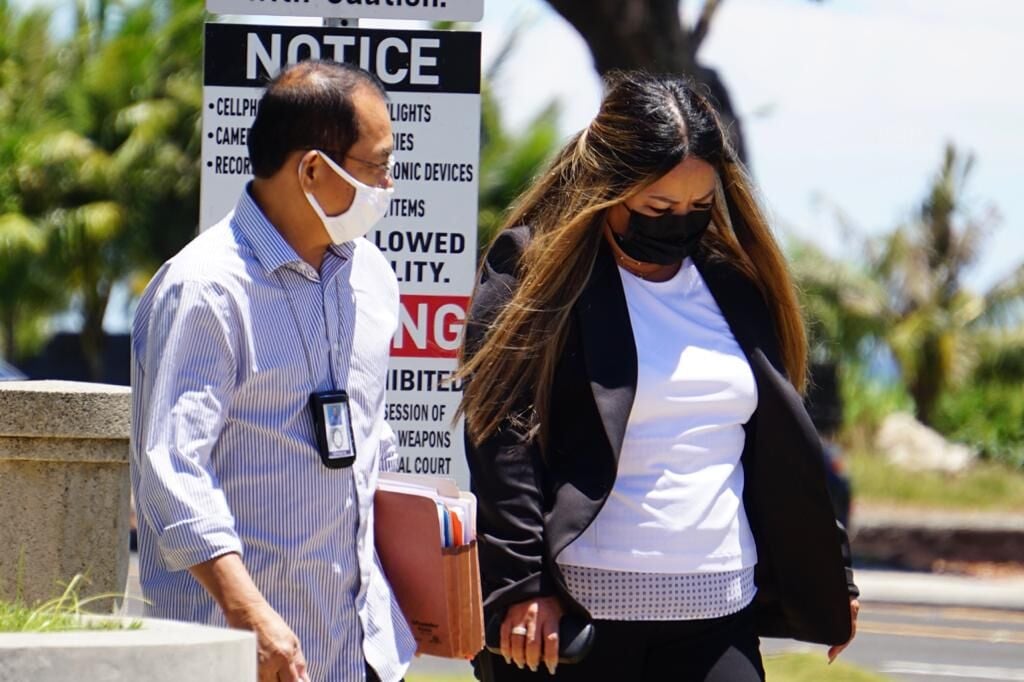 TESTIMONY: DPHSS Investigator Bernice Borja, right, leaves the District Court of Guam on Friday after she testified as a government witness during sentencing in a SNAP fraud case. Haruo Simion/The Guam Daily Post 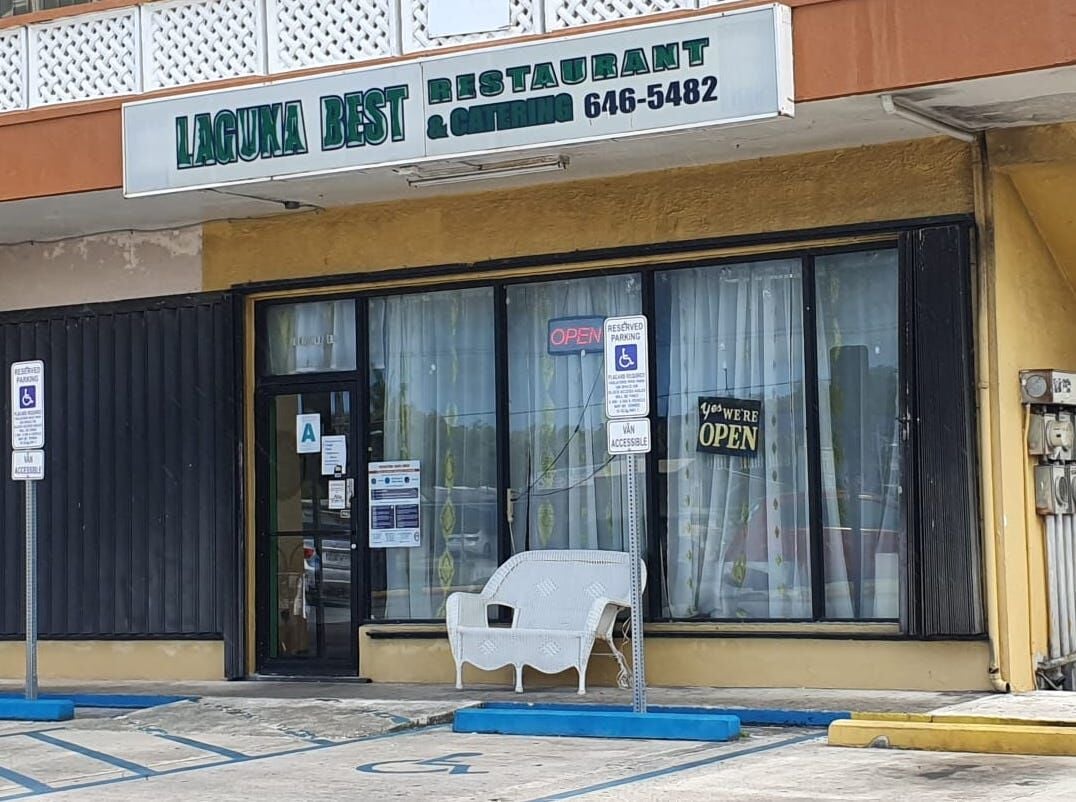 SENTENCING: SNAP fraud defendant Marites Barrogo hides her face underneath an umbrella while walking out of the District Court of Guam on Friday. Haruo Simion/The Guam Daily Post

TESTIMONY: DPHSS Investigator Bernice Borja, right, leaves the District Court of Guam on Friday after she testified as a government witness during sentencing in a SNAP fraud case. Haruo Simion/The Guam Daily Post

Laguna Best Restaurant & Catering owner Marites M. Barrogo cried uncontrollably inside the District Court of Guam on Friday, as she was sentenced to serve 10 months in prison.

Barrogo admitted to purchasing Supplemental Nutrition Assistance Program benefits from recipients to buy more than $15,000 worth of food items for her restaurant.

“Your Honor, I am truly sorry for what I did,” Barrogo said. “This has been traumatic for me. I will never do anything like this again. I thought I was helping them in a good way but I was wrong.”

She repeatedly asked Chief Judge Frances Tydingco-Gatewood to spare her from having to go to prison.

“Your Honor, I am not a bad person. I am soft-hearted for people asking for help. I have no one to blame but myself and my own stupid decisions,” she said. “I hope you can give me another opportunity to correct my behavior. Please give me a chance to help my family here in Guam and back in Philippines. I’m sorry.”

Barrogo's cries continued to echo inside the courtroom, as Tydingco-Gatewood decided her fate.

“The defendant is an organizing leader in this enterprise of food stamp fraud," said Tydingco-Gatewood. “The court feels the defendant is arrogant because she continued her illegal conduct. I know she is remorseful now, but the court is not moved by her tears because she had continued to disregard the warnings by both her husband and Public Health.”

Barrogo had since pleaded guilty to conspiracy to use, transfer, acquire, alter or possess SNAP benefits without authorization.

Her co-defendant, Stephanie Muna, 35, who was a SNAP recipient, was sentenced Tuesday to two years of probation for her involvement in the crime. Muna admitted to the court that she broke the law to help care for her large family.

Barrogo’s defense attorney, Louie Yanza, asked the judge to allow Barrogo to serve her time on Guam. She was allowed to remain out of prison and will self-surrender to the U.S. Marshals Service at a later date.

She will also serve three years of supervised release after she gets out of prison.

The court set a hearing to discuss restitution and fines for Aug. 10.

The victim in the case was the Department of Public Health and Social Services. The government agency administers SNAP.

“It is difficult for me to believe Mrs. Barrogo is remorseful of her actions. I told her that she must not continue to do this because she is breaking the law,” said Borja, who said even after the warning that her office received a call about food being taken to Barrogo’s Harmon restaurant by SNAP recipients. “It is difficult to hear that she tried to help Ms. Muna. The only help she gave to Ms. Muna is to help her commit a crime. Ms. Muna was disqualified from the program. She received all the food items at a discount price to support her business.”

Borja asked the court not to show leniency.

The sentencing hearing began earlier this week but was delayed for two days after Yanza told the court that there would be a disparity if his client were to spend any time in prison.

He referenced other related court cases, which the judge and the government took time to review.

“This is my client’s first time. She’s shown remorse. These SNAP recipients were pleading to her in exchange for cash. She is just kindhearted.”

“If she has such a good heart then why didn’t she just give her own money?” said Tydingco-Gatewood. “I don’t see the motivation being as pure. If she really cared about the health and well-being of (Muna’s) children then she would’ve gone out of her way to help in a way that wasn’t criminal.”

The defense had requested that Barrogo receive a suspended prison sentence and pay restitution, or serve six months of home confinement with electronic monitoring under the condition that she could continue to operate her restaurant to support her business.

It was said in court that Barrogo would be forced to close her business if she went to prison.

Barrogo admitted that between June 2015 and June 2018, she began purchasing SNAP benefits from recipients of the federal program, including Muna.

She admitted to buying more than $15,000 worth of food items during the conspiracy.

Under the direction of Barrogo, Muna recruited at least four other SNAP recipients to participate in the scheme and paid them cash in exchange. Barrogo also told other SNAP participants to buy food items with their benefits, which she would then buy at a discounted price, documents state.

“If (Barrogo) has such a good heart then why didn’t she just give her own money?” said Chief Judge Frances Tydingco-Gatewood