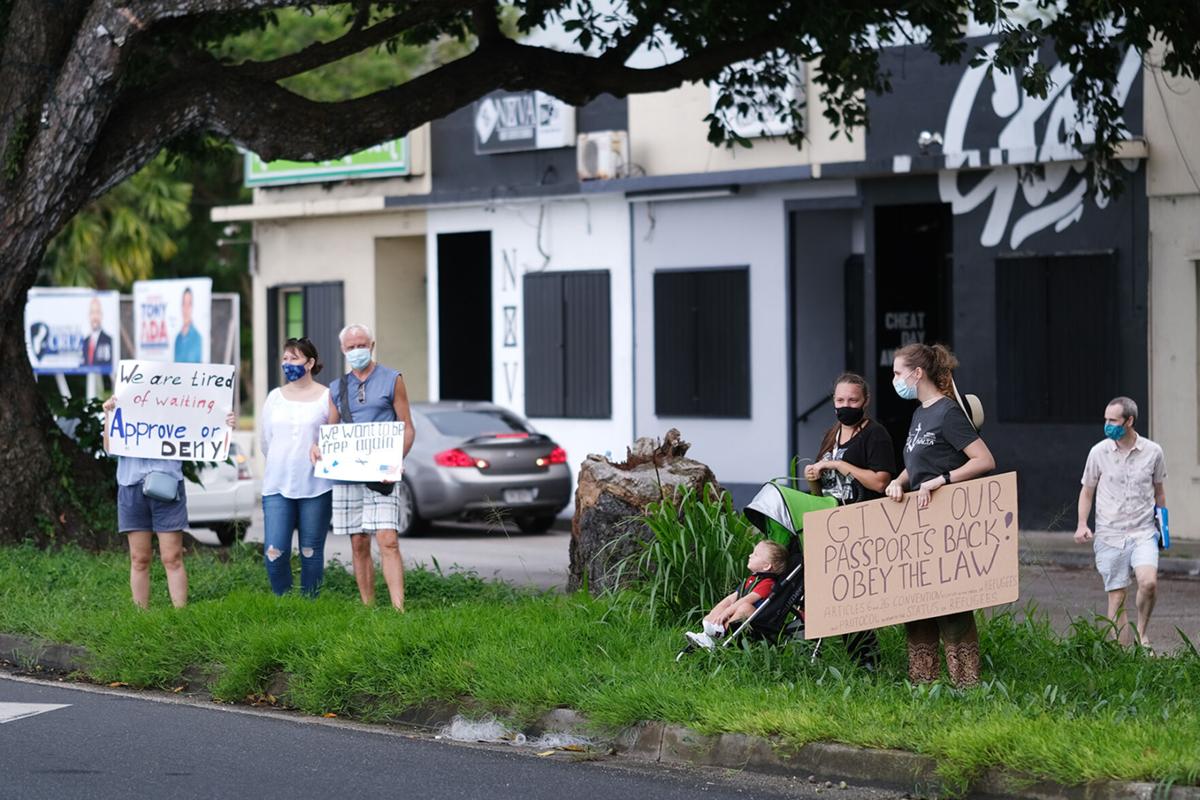 SEEKING ASYLUM: A group of Russians seeking asylum on Guam protest Thursday, Nov. 5, 2020, in Hagåtña. "We are ready to go on the hunger strike in order to stop the violation of our rights," reads a statement on the website guamrefugees.com. Norman M. Taruc/The Guam Daily Post 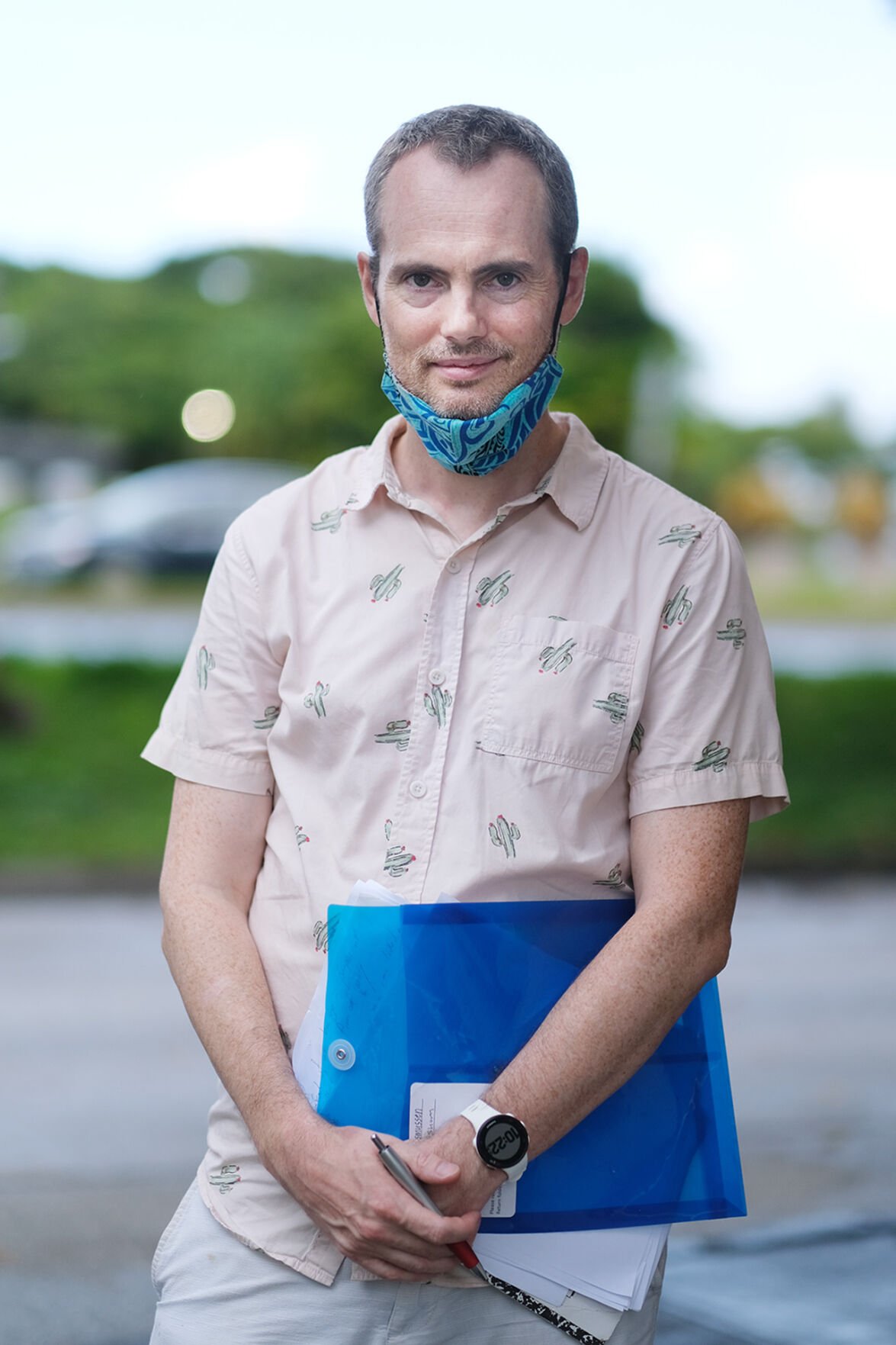 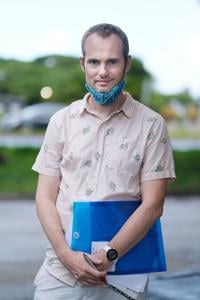 RASMUSSEN: Chris Rasmussen is an assistant professor of history at the University of Guam. Rasmussen in documenting the stories of Russian asylum seekers as part of research he is conducting on the Russia visa-waiver years on Guam. Norman M. Taruc/The Guam Daily Post 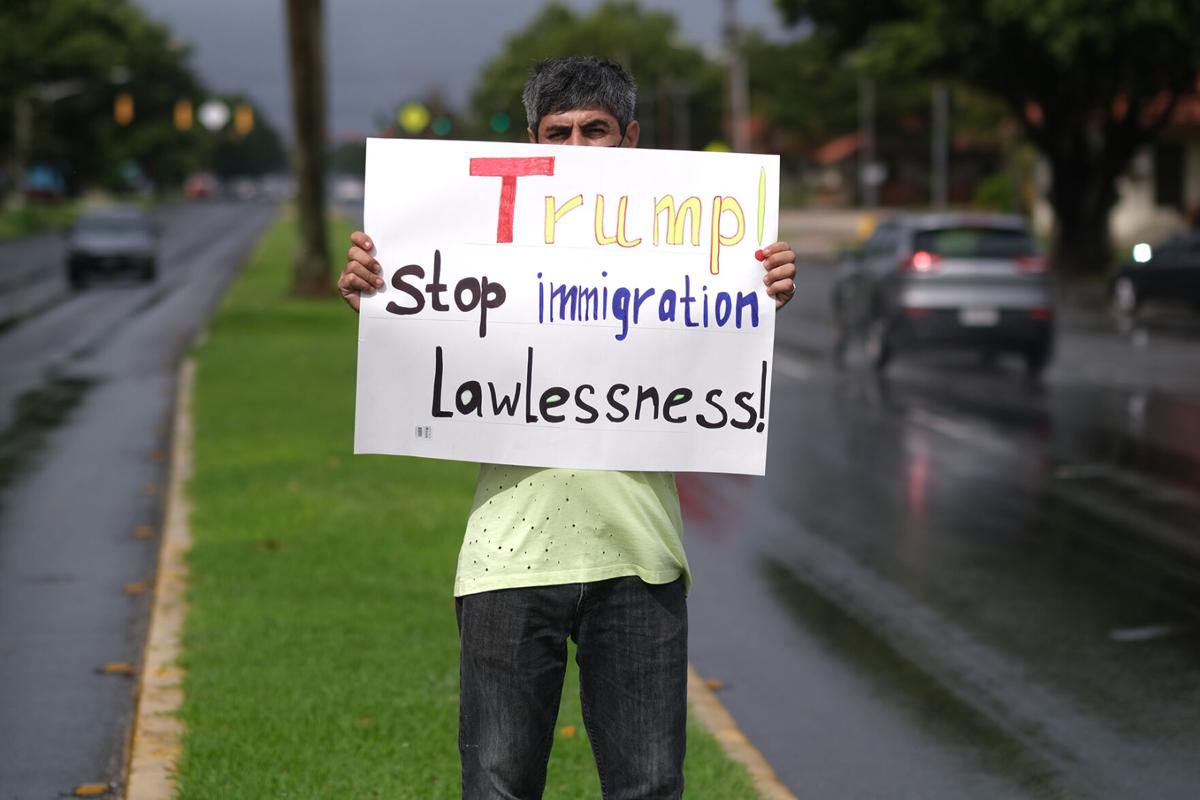 PROTEST: Edward Avanesov said he is a lawyer in his native Siberia, and has been seeking asylum on Guam for three years. He and other Russian asylum seekers held a protest Thursday morning in Hagåtña. Norman M. Taruc/The Guam Daily Post 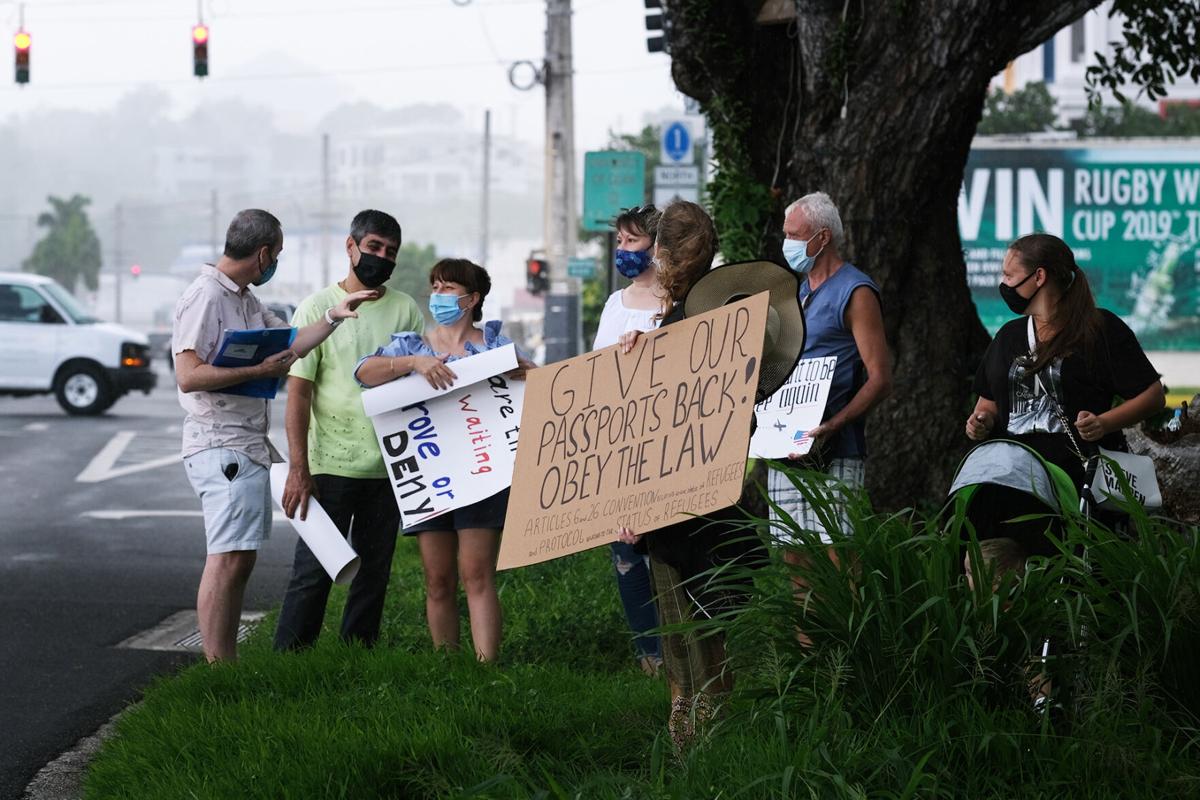 INTERVIEW: A group of Russians seeking asylum on Guam protested Thursday morning in Hagåtña. The Russians claim they have waited, in some cases up to three years, for the asylum process to be initiated by the United States Citizenship and Immigration Services. Norman M. Taruc/The Guam Daily Post 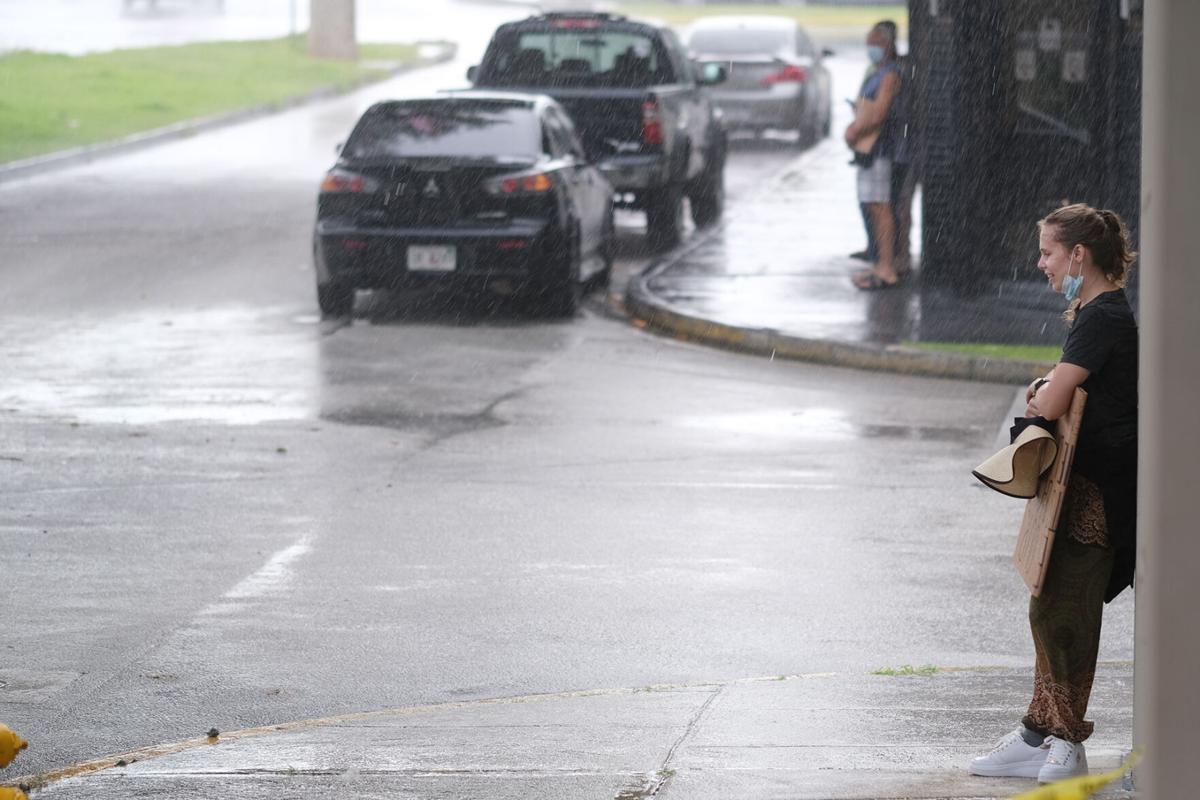 SHELTER: Ekaterina Usova takes a break from protesting during a brief cloudburst Thursday morning in Hagåtña. Usova was part of a group of less than a dozen other Russians seeking asylum on Guam. Norman M. Taruc/The Guam Daily Post

For the third time in as many months, Russian nationals seeking asylum in the U.S. have held a protest on Guam – at the U.S. Immigration and Customs Enforcement office in Tamuning, at the airport, and on Tuesday at Chief Quipuha Circle in Hagåtña.

About 200-300 Russians are stuck on island, in many cases having come seeking political asylum, said Ekaterina Usova, 27, one of nearly a dozen who gathered in Hagåtña on Tuesday. She said many have waited years for progress on their stalled cases.

"There are many people in the same situation, but they don't want to come to the rally because they are scared, because our home country Russia made us scared," said Usova.

Usova came to Guam two years ago, and was granted an interview with U.S. Citizenship and Immigration Services along with her husband in August 2019, but since then has heard nothing about how their case is proceeding.

"The law says that I need to get my decision in 60 days. ... But we still didn't receive a decision and moreover the officer took our passports – our foreign passports – from us and didn't give it back," she said.

Usova said she and the other asylum seekers are being ignored by USCIS.

"They don't want to speak with us or hear from us," she said. "They do not make an appointment with us. They do not help us."

A lifeline from repression

Chris Rasmussen, an assistant professor of history at the University of Guam, was among those gathered on Tuesday – not as a protestor but as an interviewer – gathering research about for an article he is working on about the Russian visa-waiver program that he will present virtually at a panel on the Russian diaspora by the Association of Slavic East European and Eurasian Studies.

Rasmussen said certain events in the past decade or so have played a role in why there is such a large number of Russian asylum seekers on Guam today.

"It's a big story," he said. "It involves national politics as well as global geopolitics."

Beginning in January 2012 Russians were, for the first time, allowed to come to Guam without a visa.

"Russians did come to Guam in large numbers when the visa waiver emerged. You had 20,000 Russians come in 2014," he said. But that same year events unfold that impacted the flow of Russians to Guam.

"What happens in 2014 is the market fall-off, and it's because of events in Russia. Russia annexes Crimea and this results in sanctions, oil prices go down, it's very difficult for Russian travel overseas, even if they can go to a place like Guam without a visa," said Rasmussen. "At the same time, the pressure in Russia increases. So you have Russian asylum seekers, not just on Guam."

"People were trying to get out," he said. "Guam was a lifeline for people under political repression, in some cases whose lives were literally in danger."

And as more Russians came to the U.S. seeking asylum, the harder the process became.

Rasmussen said the travel ban enacted by President Donald Trump in January 2017, along with banning travel from certain Muslim-majority countries, authorized a review of visa-waiver programs and asylum vetting processes.

"So it ends the visa-waiver program and it makes all levels of seeking asylum more arduous in the United States, but it has become something even beyond that here," he said.

So far beyond arduous that some Russian asylum seekers on Guam are considering riskier forms of protest.

'We have no way out'

Nina Avanesova, 41, who has been stuck in limbo on Guam for the past three years, said if they continue to be ignored they will take drastic measures as a last resort and go on a hunger strike.

"We have no way out but to declare a hunger strike," Avanesova said. "There are many at this moment that are ready to do it."

Usova said they are also hoping that the outcome of the U.S. presidential election will help their cause.

Whether or not Trump remains in office, Rasmussen said it is clear where a resolution must come from.

Rasmussen said the strain is not just felt by those like Usova and Avanesova and others in the same situation, local charities help those in need from Russia whose funds have run out after months or years of waiting.

"This is a problem for the asylum seekers, for GovGuam, and local charities," he said. "So it needs to be addressed."