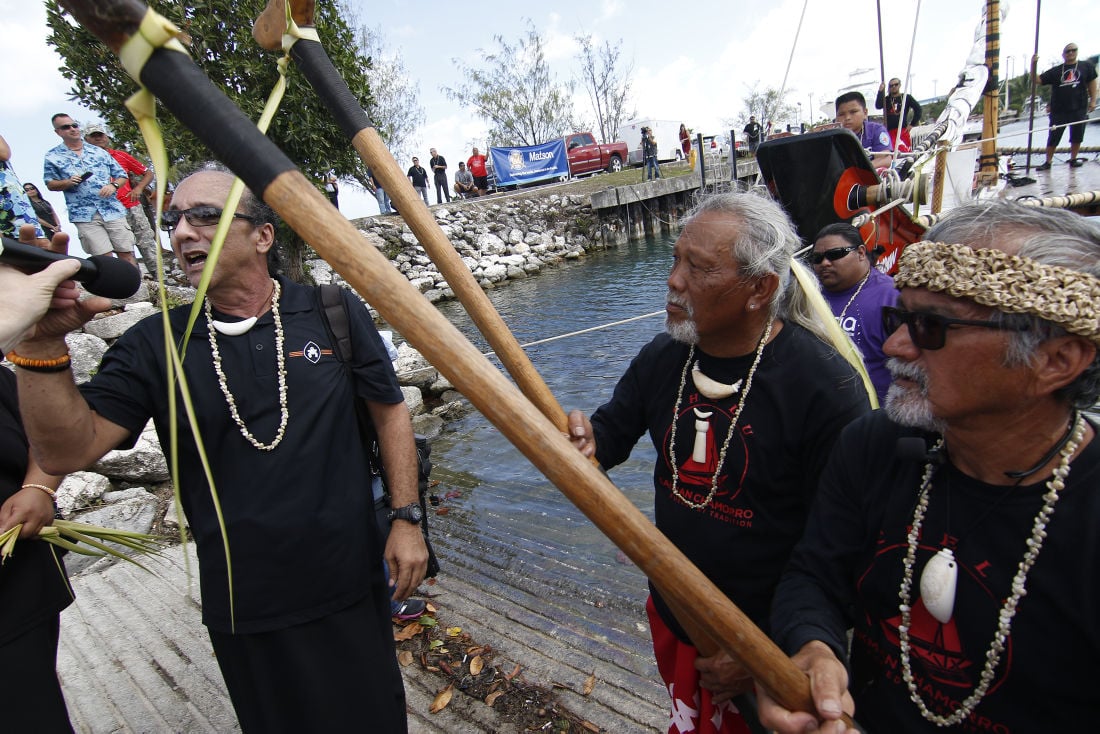 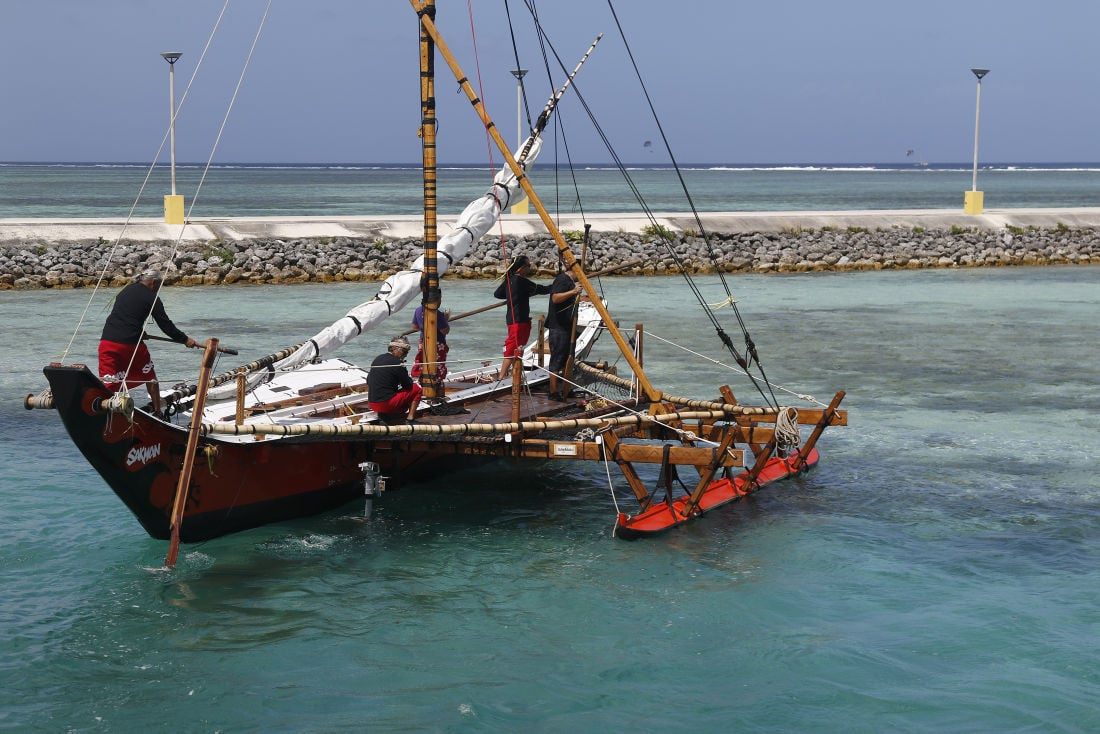 ANNIVERSARY: The Che'lu Sakman Chamorro sets sail in the Hagatna Boat Basin during Matson's 20th Anniversary & The Che'Lu Sakman Chamorro Launch event in Hagåtña, Thursday, Feb.25. Matson shipped the sakman from San Diego to Guam to be here for the 2016 Festival of Pacific Arts in May. Matt Weiss/Post

ANNIVERSARY: The Che'lu Sakman Chamorro sets sail in the Hagatna Boat Basin during Matson's 20th Anniversary & The Che'Lu Sakman Chamorro Launch event in Hagåtña, Thursday, Feb.25. Matson shipped the sakman from San Diego to Guam to be here for the 2016 Festival of Pacific Arts in May. Matt Weiss/Post

The 47-foot Che’lu Sakman Chamorro’s first journey in the waters of the Hagåtña boat basin yesterday was only a brief moment of the outrigger canoe’s extensive journey that began almost 6,000 miles away.

The Chamorro Hands in Education Links Unity (CHE’LU) organization, led by Mario Borja and the sakman team, decided to build the vessel of the type the ancient Chamorros used in their seafaring voyages and sail the vessel for the 12th Annual Festival of the Pacific Arts. The festival is to begin on May 22, but yesterday was the first time Che’lu Sakman Chamorro sailed in Guam waters.

The launch of the Che’lu Sakman Chamorro was also in conjunction with the celebration of shipping company Matson’s 20-year anniversary of doing business in the region. Matson, a sponsor of this year’s FestPac, shipped the sakman from San Diego to Guam. It arrived earlier this month.

At yesterday’s launch ceremony, Bernie Valencia, Matson general manager for Guam and Micronesia operations, and Lt. Gov. Ray Tenorio ceremonially handed off the paddles to Borja and his team before Master of Chamorro Chant Leonard Iriarte sent them off with a chant.

The Sakman Chamorro Project was initiated in 2009 by San Diego-based Chamorros, who built the sailing canoe based on the 1742 drawings by Sir George Anson.

The search for the right wood led the crew to a forest in Mendocino, California. They began the construction of the canoe in March 2010. The boat was completed in March 2011.

According to the Guam Visitors Bureau, Che’lu set sail for the first time on Aug. 26, 2011, proving seaworthy while traveling through San Diego Bay.

Matson yesterday celebrated 20 years of business in Guam, Micronesia and the Commonwealth of the Northern Mariana Islands.

“Between 2011 and 2015, Matson became the only U.S. carrier, servicing Guam and Micronesia. During those four years, Matson probably served the rest of the Micronesian islands with uninterrupted service,” Valencia said. “That’s a big task to be the only one here from the U.S. and get all the pressure.

“Being the only U.S. carrier, we knew and we took very seriously our responsibility in making sure we continued to play that important role in the economy and stability of Micronesia.”

As part of its anniversary celebration, Matson pledged to contribute more than $200,000 to charities in Guam, Micronesia and the CNMI.