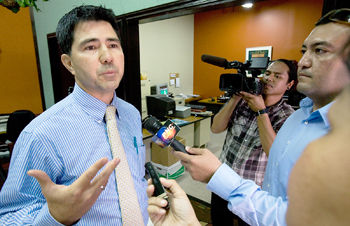 The governor’s director of policy, Arthur Clark, answers questions about the discussions on the Programmatic Agreement. Photo by Matt Weiss. 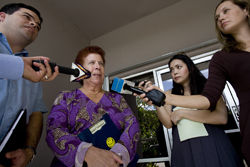 Senators Rory Respicio and Judi Guthertz answer questions from the media regarding the Programmatic Agreement. Photo by Matt Weiss

The governor’s director of policy, Arthur Clark, answers questions about the discussions on the Programmatic Agreement. Photo by Matt Weiss.

Senators Rory Respicio and Judi Guthertz answer questions from the media regarding the Programmatic Agreement. Photo by Matt Weiss

SENATORS yesterday expressed frustration over a meeting that was held between representatives from the executive branch and the legislative branch, saying that they are not convinced the new administration will commit to a “new direction.”

Concerns came to a boiling point yesterday during the meeting, with several senators walking out before it was adjourned because they were not impressed with statements offered by executive branch representatives regarding a Jan. 14 deadline the Department of Defense gave to sign off on the Programmatic Agreement and the convening of a Guam First Commission.

Sen. Rory Respicio, who was among those who walked out, said that he was given the impression that a Guam First Commission may not be convened or empanelled. He also wrote to Gov. Eddie Calvo yesterday urging him to call to order the commission “immediately.”

Respicio said the commission was created because the approach the previous administration held regarding Guam’s position did not have the full support of the community, resulting in a decline in public credibility and giving rise to concerns about the buildup’s impact.

“Decisions regarding the buildup should not solely be the province of either the executive or legislative branches, but should include our community as a whole. To do otherwise, would likely repeat the mistakes of the past and cripple the ability of our community to shape the buildup process to produce a result that is fair to the people of Guam,” he wrote.

Sen. Judi Guthertz said she was not intimidated by DOD’s “arbitrary” deadline, especially at a time when Calvo has just stepped into office.

“The military has to learn not to give arbitrary deadlines that they expect a leadership of Guam to follow.  They’re asking things from us. They’re asking to use Pagat as a focal point in this Programmatic Agreement … but I’m not going to allow our people to be put on the defensive when it comes to their land and protection of the interest of the people of Guam. And we looked at Governor Calvo to do the same thing,” said Guthertz.

Although Guthertz acknowledged that the governor’s Director of Policy Arthur Clark expressed the same beliefs for the interest of the people, she said a formal meeting needs to held to convene the Guam First Commission—one of Calvo’s campaign promises.

Although Troy Torres, Director of Communications, could not give a specific date, he said Calvo is prioritizing Guam First Commission and that it is on his agenda, among other pressing issues, noting that it has only been a few days since Calvo stepped into office. “The governor is prioritizing the empanelling of the Guam First Commission; it is going to happen. We’ve assured the senators that the governor is committed to working together with the legislature and with the community so that we present a united front,” Torres said.

Guam Buildup Office Director Eddie Reyes said that although he recognizes that the legislature’s concerns regarding the Friday deadline that was given to sign off on the PA might be justifiable, he said they were concerns based on an older draft of the PA.

Reyes said the legislative branch has not received a copy of the PA in its latest draft which was released on Dec. 30.

The latest version contains several revisions, which Reyes said he, along with Guam State Historic Preservation Office Officer Lynda Aguon believed, catered more toward the interest of the people.

Reyes added that an extension was sought up to Jan. 31 to be able to study in detail the PA and make revisions and negotiate where necessary.

“If for some reason the next version is not acceptable and not yet at the level that the people of Guam would want then that’s part of the negotiation process with the Department of Defense and we will try to represent what is in the best interest of the people,” Reyes said.

Although Speaker Judi Won Pat confirmed that the legislative branch has not received a copy of the PA’s latest version, she was not convinced that the latest draft represented the best interest of the people of Guam.

Won Pat said she was given the impression that the latest version does not remove Pagat entirely from the picture and instead refers to Pagat indirectly.

Guam has the ability to leverage the military buildup, said Won Pat, adding that she is worried that the legislative and executive branch is not in accord with its approach.

“I’m going to have to trust that the governor said that this is a leadership that would be transparent and an administration you can trust,” said Won Pat. “He has to be strong. He’s taken a step of being strong when it comes to the finances of the government; he needs to stay strong as well with the military buildup.”

Setbacks in missile 'defense of Guam' not reassuring for the island

It has been made clear from previous military and defense analysts' reports that Guam could be the target of a missile attack. Read more

No chefs on Guam

At some point in the future, I believe that former President Donald Trump will finally be recognized for his efforts to develop “Operation War… Read more