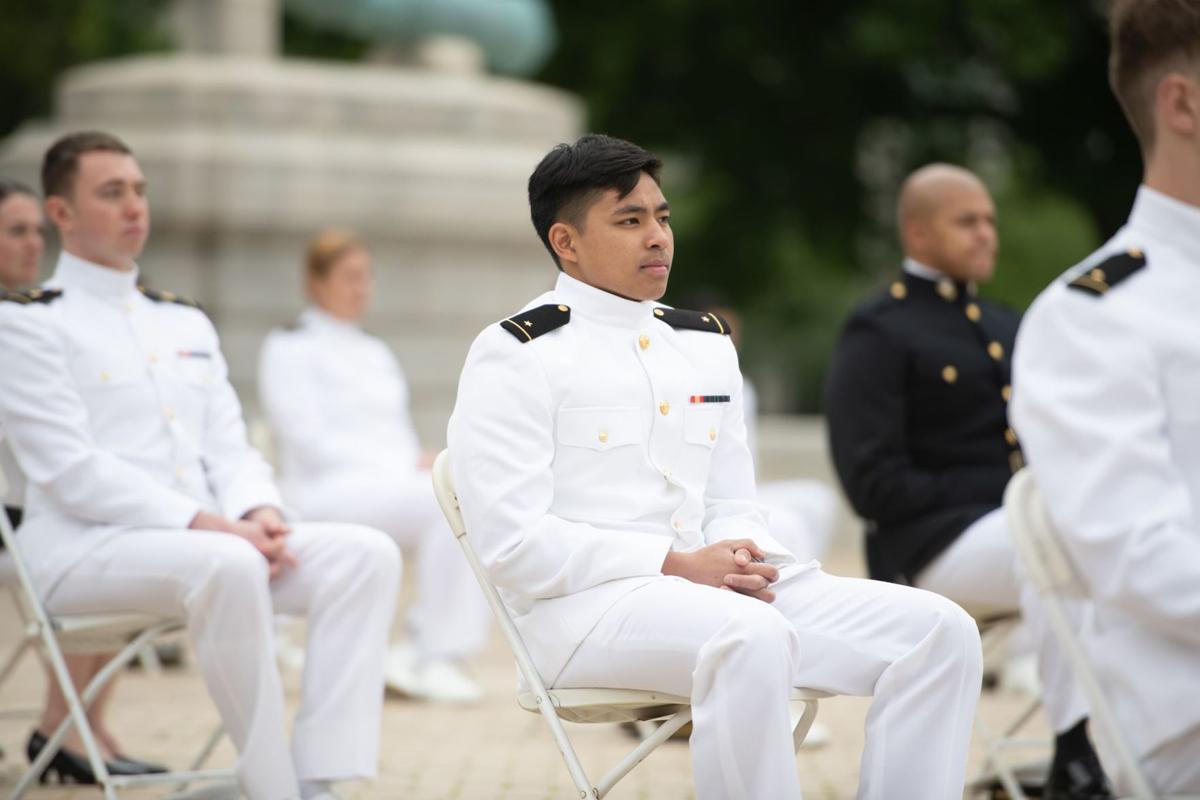 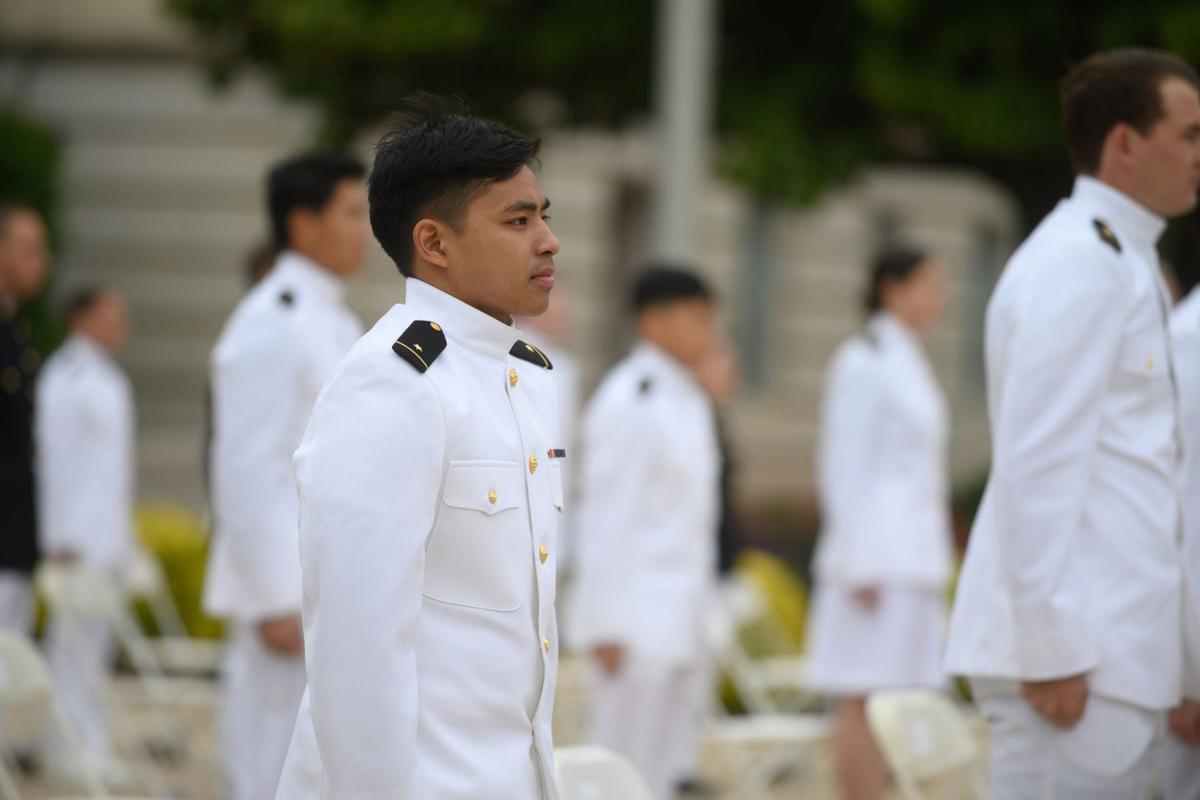 GRADUATE: Midshipman Hitoshi Philip Oue is one of 1,017 members of the U.S. Naval Academy Class of 2020 who graduated from the prestigious military educational institution. Photo courtesy of the Naval Academy 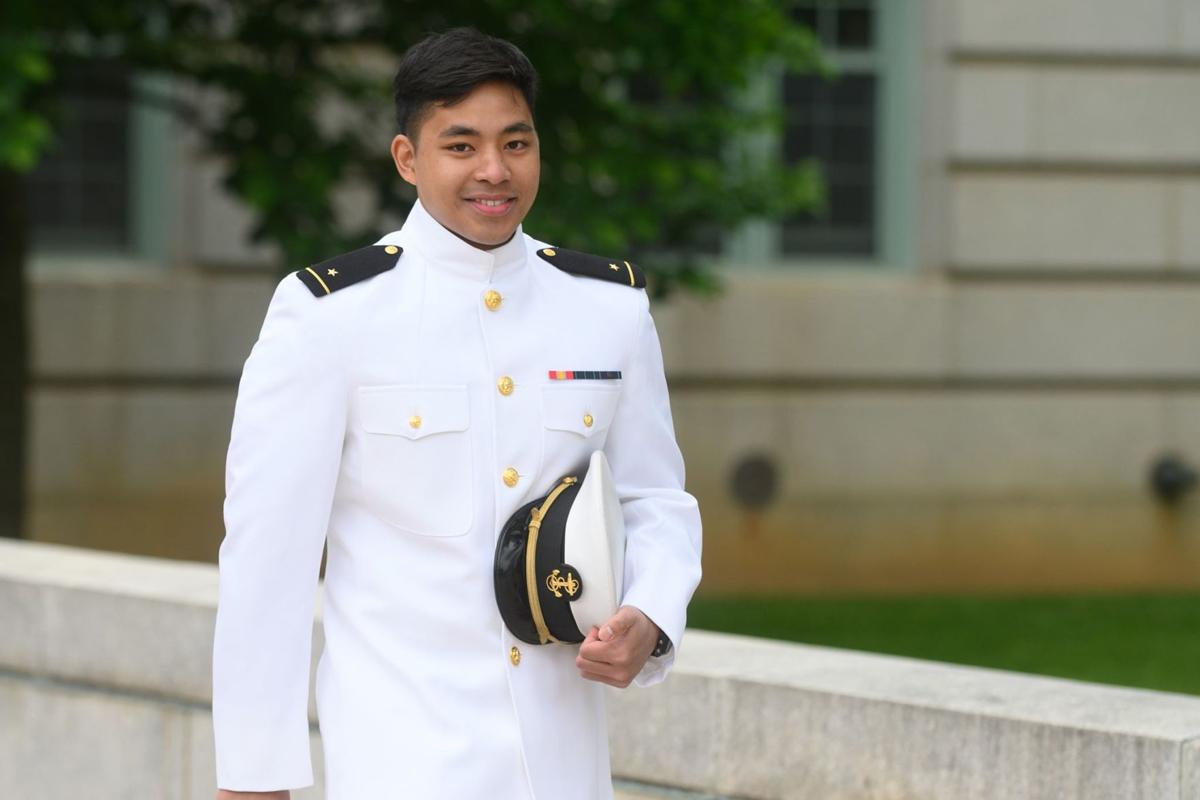 GRADUATE: Midshipman Hitoshi Philip Oue graduated as a member of the U.S. Naval Academy class of 2020 on May 22. Photo courtesy of the Naval Academy

GRADUATE: Midshipman Hitoshi Philip Oue is one of 1,017 members of the U.S. Naval Academy Class of 2020 who graduated from the prestigious military educational institution. Photo courtesy of the Naval Academy

GRADUATE: Midshipman Hitoshi Philip Oue graduated as a member of the U.S. Naval Academy class of 2020 on May 22. Photo courtesy of the Naval Academy

He was a sophomore at Xavier High School when he first heard of the U.S. Naval Academy.

Years later, Hitoshi Phillip Oue, would be among the 1,017 graduates of the class of 2020 – his accomplishment also marking him as one of the few sons of the Federated States of Micronesia to have attended the prestigious military institution.

Hitoshi Oue is ecstatic that he graduated, but said he's still processing everything.

"It's slowly hitting me," he said. In spite of that, he's looking forward to returning to Pohnpei to see his family, who couldn't attend the graduation ceremony because of the COVID-19 pandemic.

The Naval Academy class of 2020 is the first class of the institution to hold a virtual graduation ceremony. Secretary of Defense Mark Esper, whose remarks were presented via a recorded video message, told the class that in spite of the crisis, they stayed true to their class motto: "We will find a way or make one."

Son of the Pacific

Hitoshi Oue was born in Saipan. He spent several years in Guam, where he lived in Mangilao. He was about 5 years old when his family moved to Pohnpei and he lived there until it was time to head to Annapolis, Maryland, which has been his home for four years.

His family – throughout Micronesia and the U.S. mainland – have posted his accomplishment on social media, sharing their pride and love for Oue, who is the youngest of five siblings.

His older sister, Amanda Lih, told The Guam Daily Post that family members couldn't be prouder of Oue. She sent a message from the family: "Congratulations to our midshipman baby brother Hitoshi Phillip Abello Oue! There are no words to express how happy and proud we are of you. You have set such a good example for the young generations of FSM. You've done yourself well, with this hard-earned and well-deserved accomplishment. Continue to aspire for great things and stay the humble and determined person that you are. We look forward to seeing all the great things you will continue to achieve in the future! We love you and can't wait to see you."

Hitoshi Oue wanted to send his thanks to mom June Abello, his father Rio Oue, stepdad Agusto Sumor Carlos, and his siblings. Hitoshi Oue said he's grateful for his family's support and for the encouragement of his teachers and mentors from Xavier High School, in Chuuk State, FSM.

"I was very motivated to make them proud," he said. "At Xavier High School, they encourage you to go out and get an education and learn as much as you can and then come back to make home a better place."

Hitoshi Oue didn't know much about the military. He has some cousins in the Army, but he comes from a primarily civilian family. It was during his second year at Xavier that he spoke to a fellow student about the Naval Academy.

"I knew one of the seniors who was about to graduate. He applied to the academy and he was telling me about it," Hitoshi Oue said. "And I decided if there was one option to do for going to college, I would do that."

Hitoshi Oue applied and just before graduating high school in 2016, he received word that he had earned a place at the academy.

"That was a very big moment for me," he said. "I was really starting to worry about college and whether I was even going to be able to go to college."

He said it took him a little over a semester to get used to living in the mainland and getting accustomed to the military culture.

"We've gone through a lot these four years. It's been a tough journey ... but we did it," he said.

The "we" he's referring to includes his fellow graduates, but also a fellow Pacific islander and Xavier High School graduate: Andre Nevado of the Republic of the Marshall Islands.

"It was great having him there with me," Hitoshi Oue said, adding they got into the same class and graduated together as well.

The duo would lean on each other as they went through the academic rigors of the Annapolis school, as well as the challenge of acclimating to life on the mainland.

"It made it easier to get through the culture shock," he said.

Hitoshi Oue said he's waiting for travel restrictions to be lifted so he can return home to see his family and find out where he'll be working.

As part of the requirement, he'll be working with the FSM government and hopefully, he said, putting his information technology degree to good use.

He added a word of encouragement to younger islanders, to find something that motivates them to improve themselves so they can, in turn, improve the community around them.

"It's hard being away from home," Hitoshi Oue said of life far from the islands. "Always have something in your mind to motivate you, to get you through the adversity, because it can be tough."

His family – throughout Micronesia and the U.S. mainland – have posted his accomplishment on social media, sharing their pride and love for Oue, who is the youngest of five siblings.