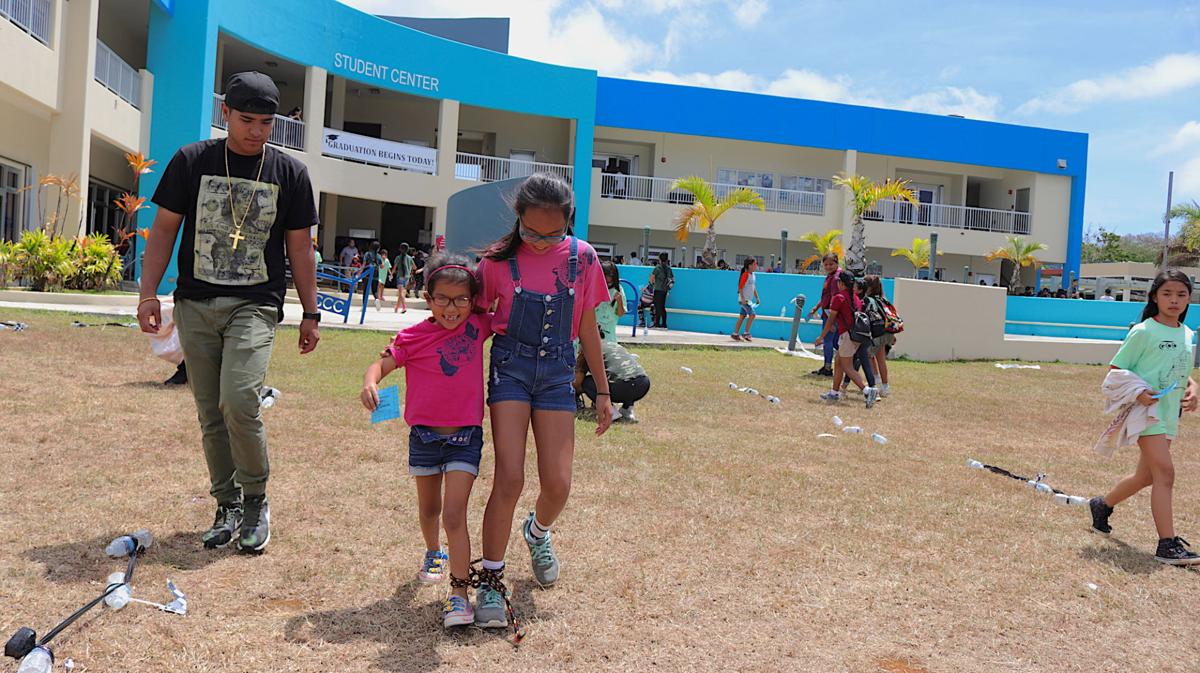 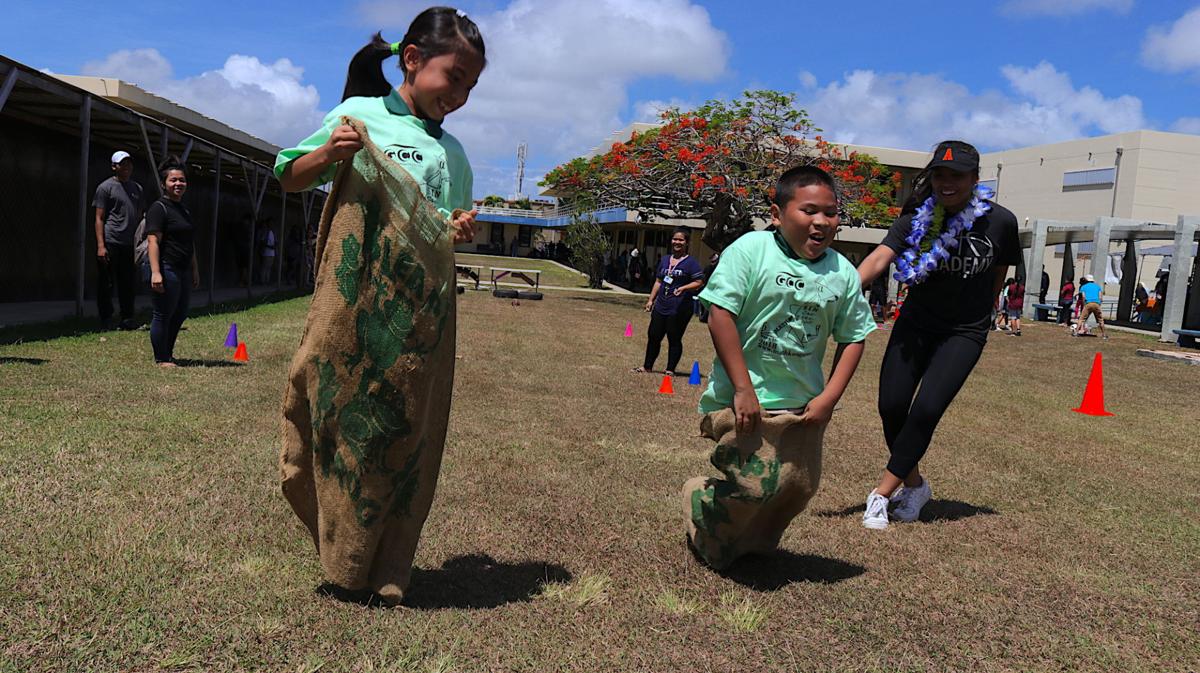 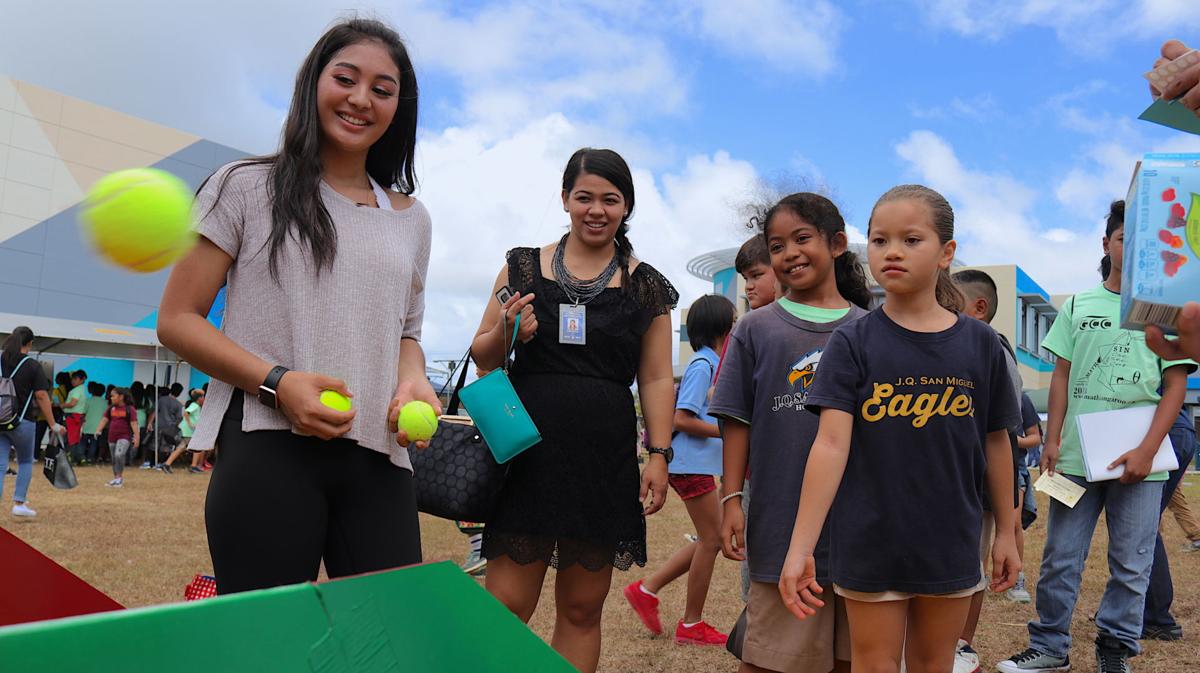 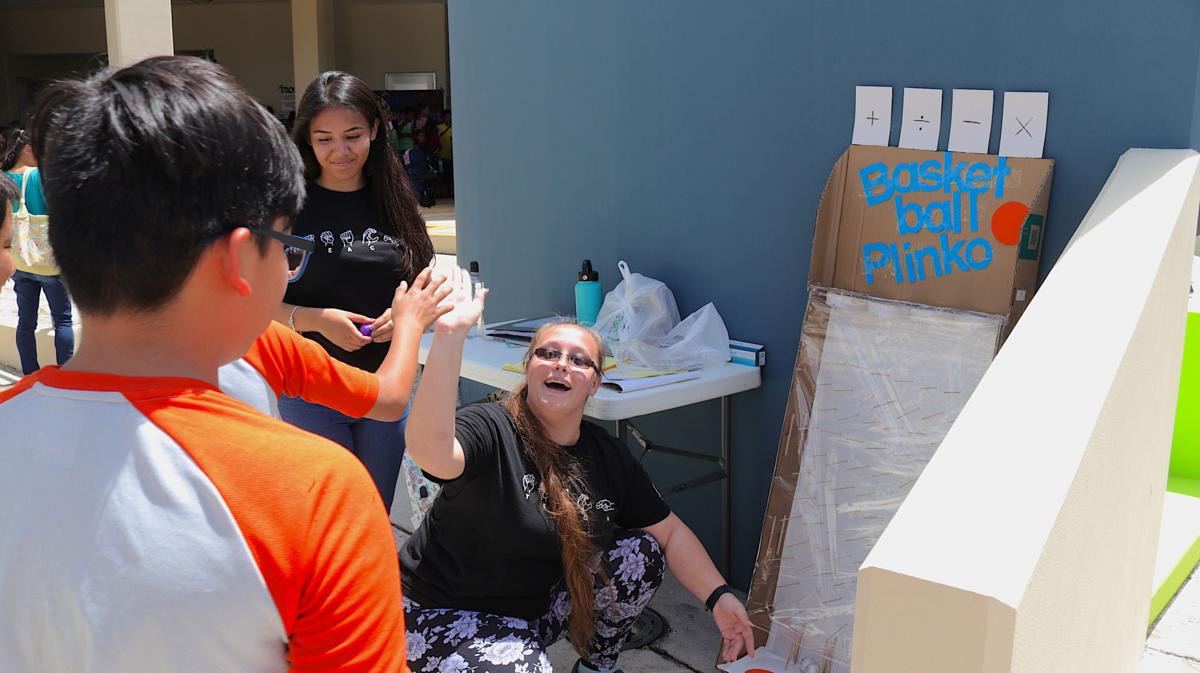 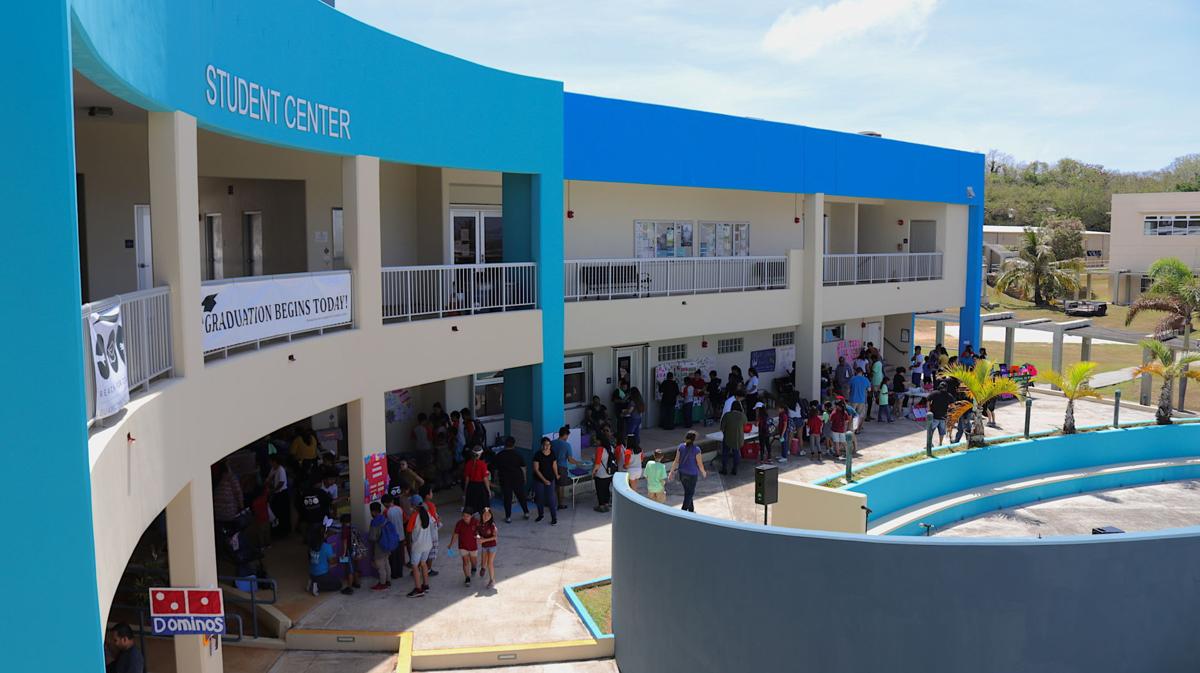 CARNIVAL: The Guam Community College held a Math Carnival for local elementary school students on Friday. Students got a chance to take part in a variety of math games, which were run by GCC college students. Dontana Keraskes/The Guam Daily Post 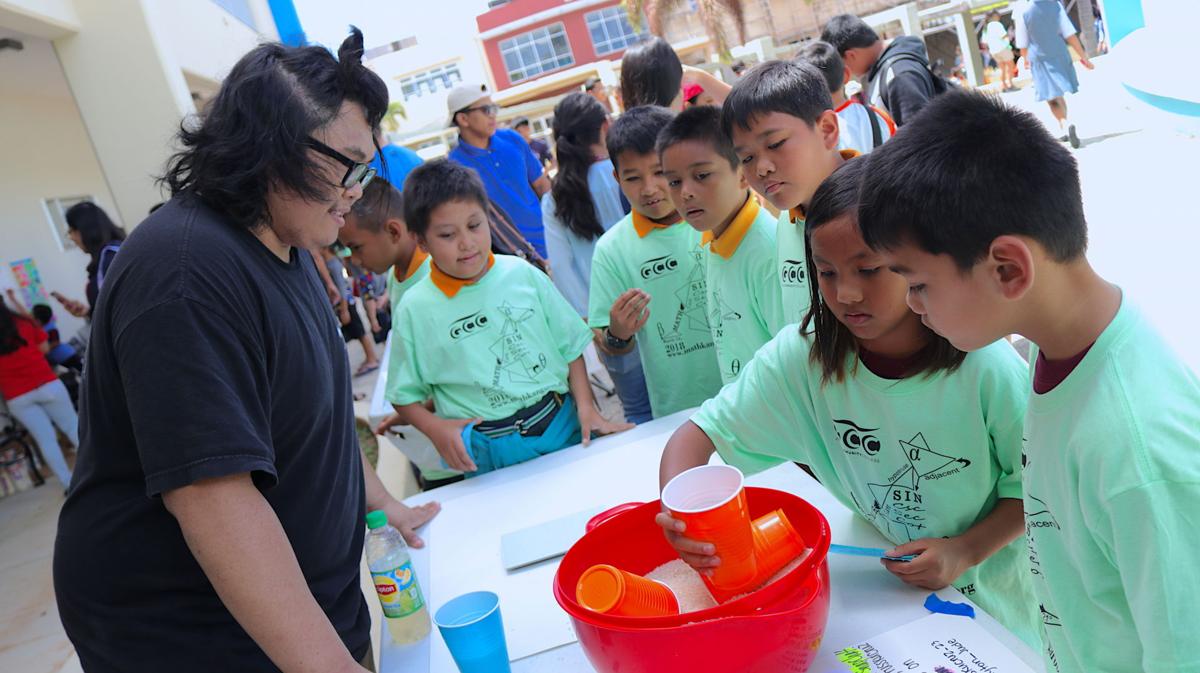 MEASUREMENT: GCC culinary student Russell Cruz, left, helps students to a game of "The Price is Rice," in which students were faced with the challenge of eyeballing an exact weight of rice. Dontana Keraskes/The Guam Daily Post 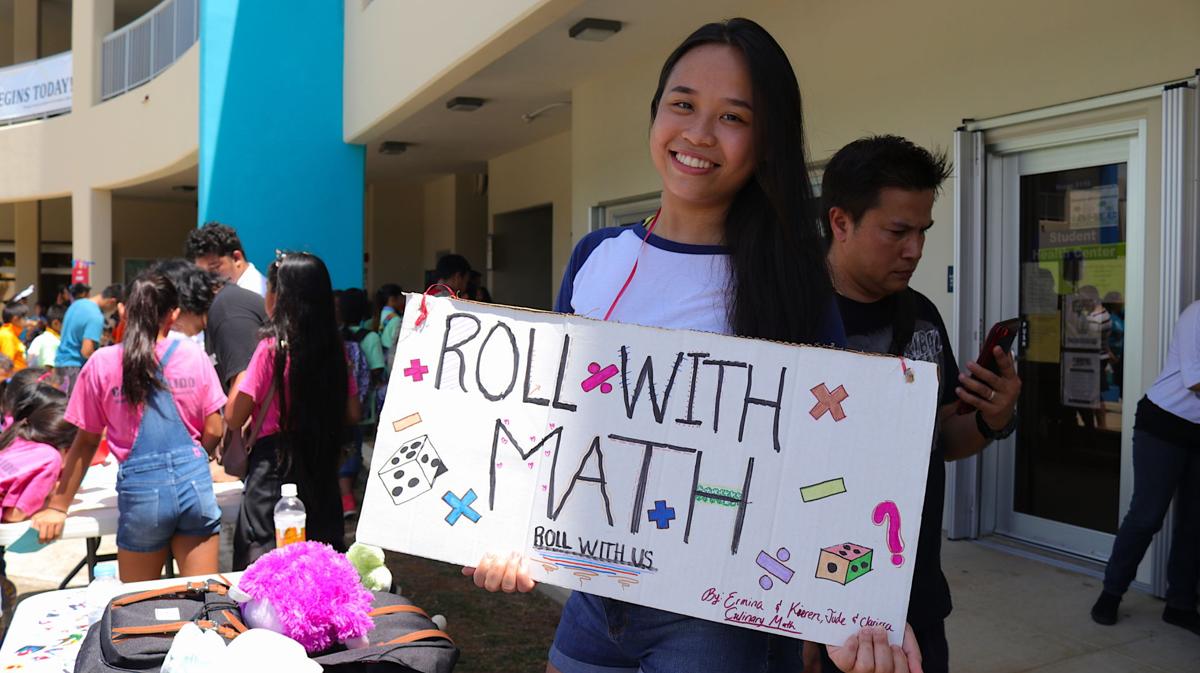 CARNIVAL: The Guam Community College held a Math Carnival for local elementary school students on Friday. Students got a chance to take part in a variety of math games, which were run by GCC college students. Dontana Keraskes/The Guam Daily Post

MEASUREMENT: GCC culinary student Russell Cruz, left, helps students to a game of "The Price is Rice," in which students were faced with the challenge of eyeballing an exact weight of rice. Dontana Keraskes/The Guam Daily Post

Spread about three buildings at the Guam Community College were the nearly 400 students, from kindergarten to 12th grade, who put their math skills to the test during the international Math Kangaroo competition.

This is GCC’s ninth year to host the event that has attracted public, private and home-school students.

Handfuls of parents and teachers lined the halls as their students took on a 75-minute-long session to work through a series of mathematical word problems – what can be an unpleasant and intimidating feat for many.

Upon completion of their tests, each student received a certificate. First-, second- and third-place winners will be selected from each of the 12 grades and will receive a ribbon. And, to promote mathematical fun, one of the awards given will be a tangram puzzle set.

According to GCC Math Department Chair Carl Torres II, a total of 417 students signed up to participate this year, a significant increase from the 70 to 80 students who signed up for the first year of the competition.

The competition was complemented with a Math Fest by the GCC Education Department, which featured numerous games and activities promoting the many ways students could use math in creative and fun ways.

As if it were a playground, children enthusiastically explored a range of math-inspired games in the GCC center courtyard. From cooking and fishing, to physical fitness, a taste of math was present in each activity.

Alexis Legaspi, 23, a student of the GCC Child Growth and Development class, incorporated math into a classic favorite – Jenga.

By rolling dice, students were presented with a math equation to answer. Because each Jenga block was labeled with those answers, students had to remove that block and place it on top of the stack, continuing until the tower fell.

“I noticed that kids love playing Jenga … so, might as well incorporate math with it,” Legaspi said. “So far, they really love it. They’ve been trying it over and over again. They really enjoy it so much. “

The GCC Criminal Justice class put together a math relay, in which students formed a team.

To begin, students answered an equation, proceeded to race over tires because “the floor is lava,” jumped through a sack race, then had their ankles tied in a hustle to the finish line, where they ended with another equation.

According to Davin Waki, 18, the class was given a week to plan and execute a game idea, and succeeded.

‘The more experience you have, the better’

Parent Naomi Friebert is highly appreciative of the opportunities that Math Kangaroo offers on island, particularly because it is something students can keep doing from the first to 12th grade. Her son, Kazu Friebert, a fourth-grader, has participated in the competition for two years and loved it.

“By the time you get to college, you’re going to be a pro at doing contests, or just taking a test,” the mom explained. “The more experience you have, the better it gets when you’re older. The problem-solving skills that are emphasized on these tests are things they subconsciously absorb. We’re so lucky in Guam to have these opportunities.”

Though the competition originated in Illinois, Friebert said, the competition is uncommon among other U.S. states. The fact that GCC includes a carnival-type Math Fest is appealing to Friebert, who said it was “unique” to Guam.

“The GCC students really work hard to make it fun,” she added. “After this rigorous test, they get to go out and do math games. Really, the reason we came (last year) was to have a fun day, and he ended up doing really well on the test.”

Participants were expected to register by December 2017, according to Friebert. Her son placed second in his grade.

“We were just doing it for fun because we heard about the carnival after. He loved it last year,” she said.

Steven Lam, GCC associate professor and Math Kangaroo Guam regional director, stated the many ways the competition exposes participants to the world of math, such as its encouragement to master their mathematical knowledge, confidence in their ability to comprehend math, and understanding of how math applies in nature’s laws and human activities.

“The word is getting around that this math event is fun,” said Torres.