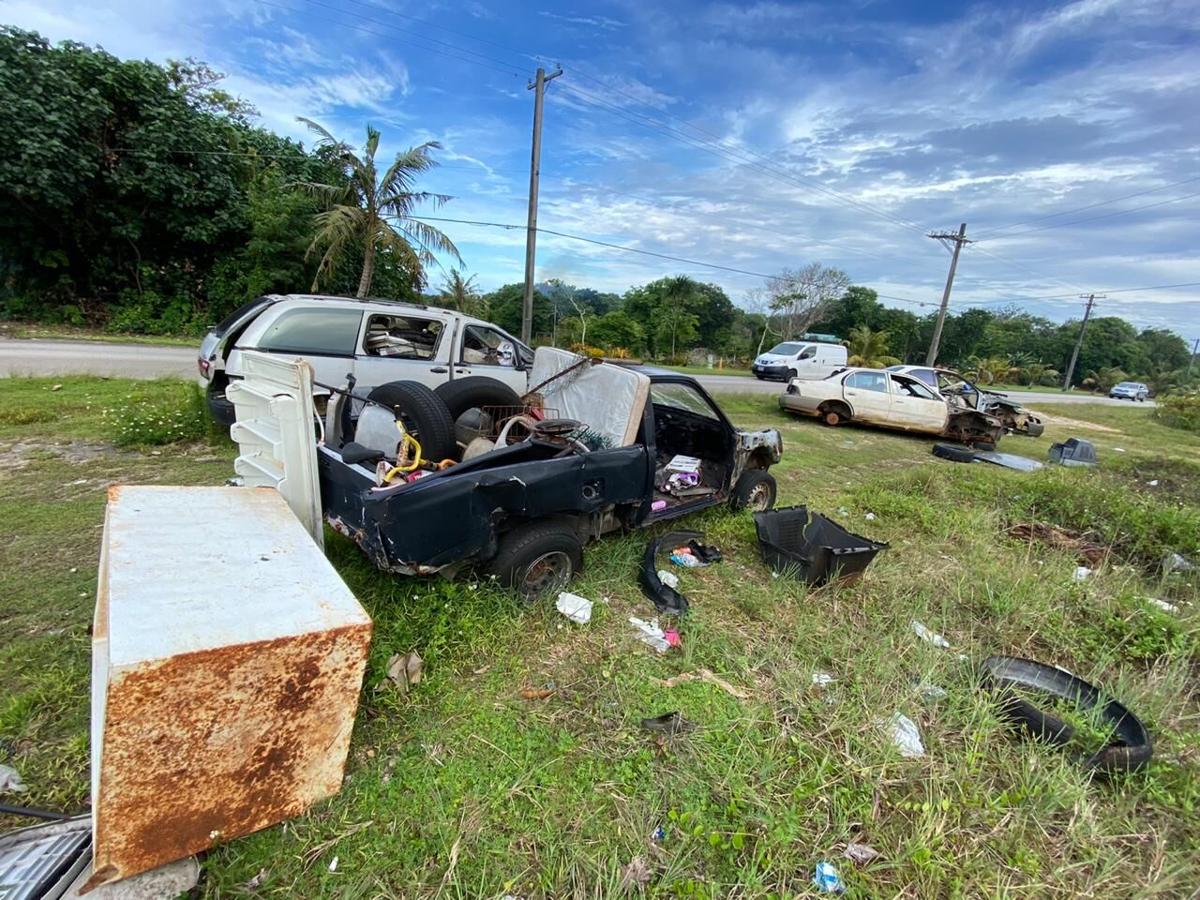 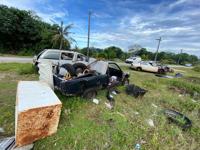 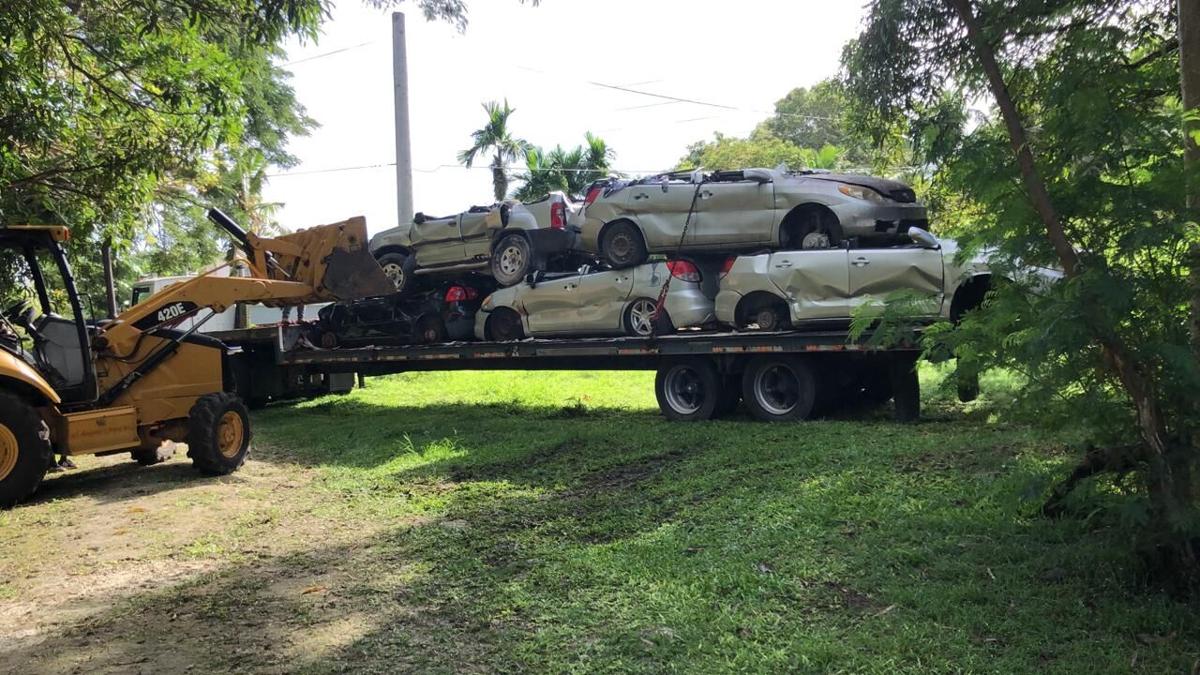 20-100 CARS: Abandoned vehicles in Piti are hauled July 30 by JT Angoco & Sons Inc. The contractor was hired by the Piti Mayor's Office using a portion of the Recycling Revolving Fund distributed this past week to villages. Piti is among the first villages to get a contractor to haul junk cars for transport to a recycling facility. Photo courtesy of Piti Mayor Jesse Alig

20-100 CARS: Abandoned vehicles in Piti are hauled July 30 by JT Angoco & Sons Inc. The contractor was hired by the Piti Mayor's Office using a portion of the Recycling Revolving Fund distributed this past week to villages. Piti is among the first villages to get a contractor to haul junk cars for transport to a recycling facility. Photo courtesy of Piti Mayor Jesse Alig

With the limited purchase order amounts they were allotted last week, most village mayors can only remove 20 to 30 abandoned vehicles, while the largest villages, Yigo and Dededo, can only afford to remove 70 and 100 cars, respectively.

From Yigo to Merizo, abandoned vehicles by the side of major roads, on public easements, and in vacant lots and private yards have become safety and health hazards.

They also are an eyesore, which does not bode well for an island preparing to reopen its tourism industry, which has been devastated by the COVID-19 pandemic.

Based on interviews Friday with 19 mayors or their staff, the purchase orders for the removal of abandoned vehicles range from $3,000 to $15,000, depending on village size and needs.

One abandoned vehicle costs $150 to haul and $150 to be recycled, mayors said.

Separate purchase orders were distributed for the recycling facility receiving the hauled vehicles, also from $3,000 to $15,000 per village.

Merizo, Piti and Talofofo got the smallest amount of $3,000 each, which will allow the villages to each remove 20 junk vehicles.

Piti Mayor Jesse Alig wasted no time removing 17 of 20 priority abandoned vehicles by Friday, within days of getting the purchase orders.

"The early bird gets the worm," he said, a day after J.T. Angoco & Sons Inc. hauled junk sedans and pickup trucks.

Most mayors are now competing with each other to get haulers to remove junk vehicles from their villages before Sept. 30.

Villages that received $3,750 each will be able to remove 25 vehicles each. These include Asan-Maina, Chalan Pago-Ordot, Hagåtña, Inarajan, Santa Rita, Sinajana and Yona.

"But there's more than 50 abandoned vehicles in Santa Rita that need removal. Now we're starting to tag which 25 cars will be prioritized," Mayor Dale Alvarez said.

Inarajan Mayor Doris Lujan shared the sentiment of not having enough funds to take care of hazardous vehicles. Many were not picked up during the previous years' funding cycles, she said.

In Mangilao, more than 100 abandoned vehicles are lying by the side of the road, in public easements and other areas, but the village's funding is only enough to remove 30 cars, Mayor Allan Ungacta said.

"My major concern is people putting vehicles on the side of the road, creating safety and health hazards," he said. "I strongly advise them not to do that."

After learning of the funding limit, Ungacta said his office had to prioritize the removal of junk cars posing the most danger to passing motorists.

Agana Heights, Barrigada, Mangilao, Mongmong-Toto-Maite, Tamuning and Umatac got $4,500 each, which means they each can remove 30 abandoned vehicles.

"It's frustrating that the Guam (Environmental Protection Agency) released the money only recently. Now mayors only have two months to remove all the vehicles. I understand COVID-19 happened, but this was also the same as last year when there's no COVID," Agana Heights Mayor Paul McDonald said.

The funds used to remove abandoned vehicles and other recyclables come from the Recycling Revolving Fund, which is a portion of the fees that Guam residents pay every time they register a vehicle at the Department of Revenue and Taxation.

GEPA this year approved the use and release of $466,000 of the funds for the mayors' use.

Agat Mayor Kevin Susuico said his office received a $6,000 purchase order, allowing him to remove 40 vehicles, a fraction of the actual number of abandoned vehicles in his village.

"When roads are smaller or narrower than normal, the abandoned vehicles by the side of the road are obstructing traffic and it makes it difficult for emergency vehicles to enter when there's fire or health emergencies," he said.

Yigo Mayor Rudy Matanane said his village was given a $10,500 purchase order for 70 vehicles.

He's hoping he can negotiate with the contractors to haul more than that.

Dededo, Guam's most populated village, got a purchase order of $15,000, according to Mayors' Council of Guam Executive Director Angel Sablan.

Because of the dengue scare last year, the government removed more than 400 abandoned vehicles and over 3,000 used tires from Swamp Road in Dededo.

Based on the recycling fund purchase orders mayors got for fiscal 2020, the number of abandoned vehicles each village can remove in two months is as follows:

Mayors said they expect to receive purchase orders for the removal of white goods, used tires and other recyclables as early as next week.

Based on initial data from the Mayors' Council, $318,500 has so far been budgeted for distribution to mayors.

The remaining amount of $147,500 will later be used to increase amounts allotted to villages as they exhaust the initial purchase orders, but still need funds for the cleanup, Sablan said.