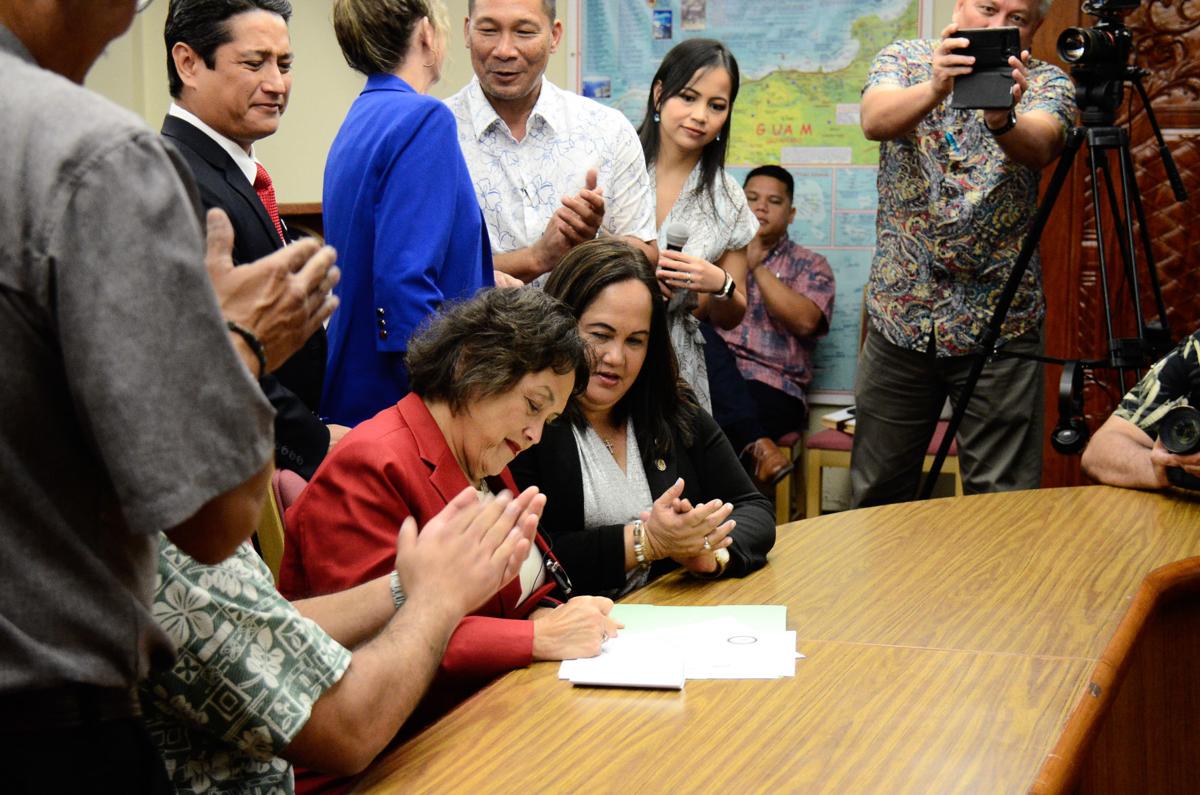 SIGNING: Gov. Lou Leon Guerrero sits among Cabinet members and senators as she signs a memorandum of agreement with the U.S. Department of the Treasury for the payment of war claims during a ceremony at Adelup Thursday morning. John O'Connor/The Guam Daily Post 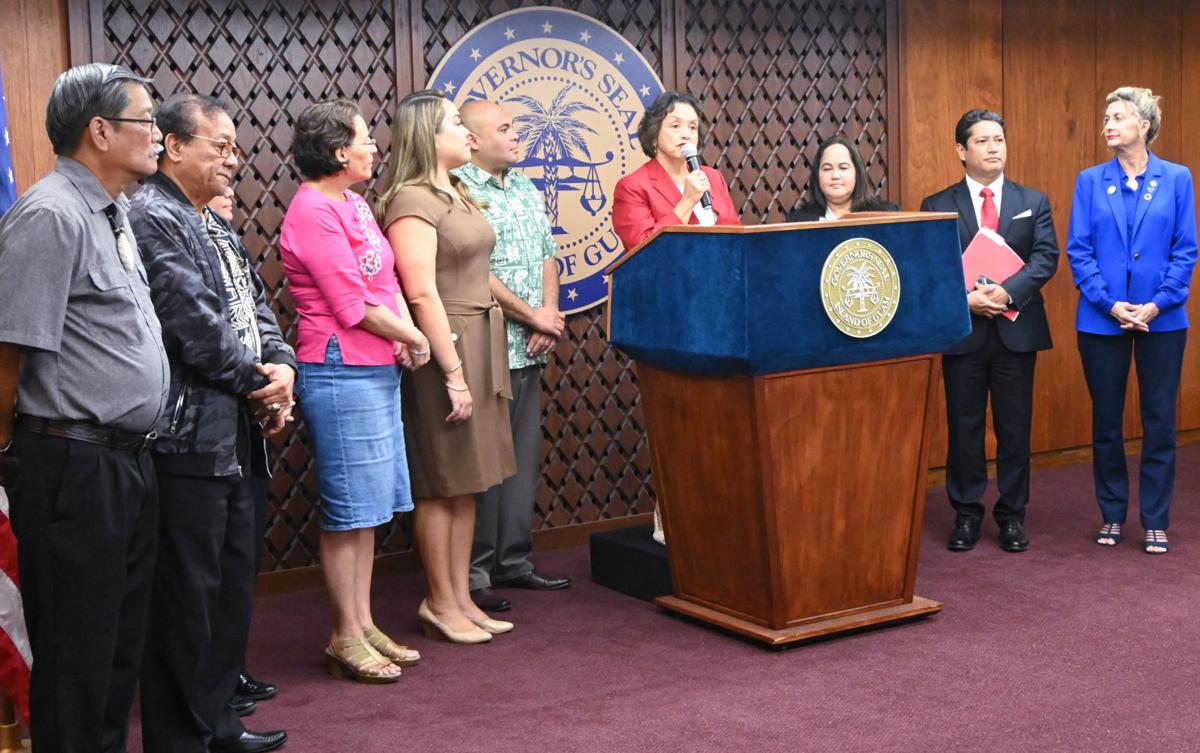 SIGNING: Gov. Lou Leon Guerrero sits among Cabinet members and senators as she signs a memorandum of agreement with the U.S. Department of the Treasury for the payment of war claims during a ceremony at Adelup Thursday morning. John O'Connor/The Guam Daily Post

Starting today, World War II survivors can bring their letters from the Foreign Claims Settlement Commission to the old Hakubotan building in Tamuning to sign up and receive the war reparation owed to them.

The claimants also need to bring a valid government ID along with the Washington, D.C.-based commission's approval of their claims.

"If it is a legal authority on behalf of them, we ask that legal authority to bring documents to show proof. We're going to have notaries there," Gov. Lou Leon Guerrero said Thursday after she signed the long-awaited memorandum of agreement that provides the mechanism by which the government of Guam will be reimbursed for paying each claim.

The governor was flanked by Lt. Gov. Josh Tenorio, various Cabinet members and several lawmakers when she announced the agreement with the U.S. Department of the Treasury.

"We work fast! That's what this administration does!" the governor announced in the press conference.

The plan to pay war reparations with local funds started in Congress with the Guam World War II Loyalty Recognition Act introduced by former Delegate Madeleine Bordallo. The federal law authorizes the use of Section 30 funds owed to Guam to pay the war reparations. However, a technical flaw required another congressional bill, which current Delegate Michael San Nicolas is working to usher through Congress.

Saying they recognize the need to pay reparations to those war survivors who are still alive, the governor, along with Speaker Tina Muña Barnes and other senators, began a push early last year for local legislation to pay war reparations using money diverted from Medicaid funds.

The governor signed that legislation into Public Law 35-61 in early January but the local bill needed the federal government's cooperation to get the names of each war survivor whose application for reparations had been adjudicated, and the reparation amount authorized. The memorandum of agreement outlines the responsibilities of the local and federal governments.

Tony Babauta, the governor's chief of staff, said his office anticipated the Treasury would respond within three to four days of receiving the claim documents.

The governor had set a goal of cutting the first check by the end of the month but Babauta said the administration hopes to hand out that first check by Wednesday. The first recipients will depend on how the Treasury processes its paperwork.

Leon Guerrero has said between $13 million and $14 million in local funding has been set aside to pay claims.

The funding source comes from local matching funds for Medicaid that were reimbursed by the federal government after Guam was awarded a 100% share through the federal Medicare Assistance Percentage program, according to the governor.

If the local funding source is fully used before the passage of the congressional solution, in the form of H.R. 1365, Leon Guerrero said GovGuam will continue to process claims and find funding until the resolution is enacted.

Bordallo's Guam World War II Loyalty Recognition Act was the initial mechanism for the payment of war claims through Section 30 money. However, it lacked the provision to authorize the U.S. Treasury Department to make payments.

But San Nicolas and the governor have clashed over the local legislation. San Nicolas has said it jeopardized H.R. 1365. He announced Thursday that he anticipates a Senate vote on the resolution in the coming weeks.

During Thursday's signing ceremony, while recognizing the work that had gone into obtaining Guam war claims, Leon Guerrero recognized past Guam delegates by name, but did not mention San Nicolas.

She did, however, restate her administration's support for H.R. 1365 and — when asked — said San Nicolas was invited to witness the first check being issued, along with former delegates.

The Treasury Department is holding about $23 million from Section 30 intended for war claims. Local moneys are expected to be reimbursed, but that is dependent on H.R. 1365's passage, according to the governor's chief of staff.

According to the local legislation, all money reimbursed to Guam shall be deposited into the War Claims Fund, and any remaining funds are subject to legislative appropriation.

There are additional issues involving potential claimants who missed the application deadline or those who did not receive adjudicated claim letters.

Barnes said her office had been fielding these concerns and sometimes, the claimant's contact information was wrong but the claim had been adjudicated.

"Just yesterday, I gave a letter to a constituent who cried and said, 'I got my claim number but I never got the other letter.' Her case was adjudicated but I guess the number wasn't right or the address," Barnes said.

Claimants can get information at the new processing center but the speaker said her office remains open to anyone needing clarification on their claims. The Foreign Claims Settlement Commission normally responds within a day of receiving inquiries, she added. The commission is authorized under federal law to conduct a supplemental war claims compensation program for victims and survivors of the attack and occupation of Guam by imperial Japanese military forces during World War II.

The speaker's office is also drafting a petition seeking amendment of the Guam World War II Loyalty Recognition Act for those who missed the filing deadline, which was June 20, 2018.

• If you're a World War II survivor who already has received an adjudicated claim letter, you can bring that letter along with your official identification to the old Hakubotan building in Tamuning, which is the processing center for local war claims. The office opens today and will be open from 9 a.m. to 4 p.m. Monday to Friday.

• In anticipation of the high number of claimants, the office also will be open Saturday, Jan. 25. CHamoru-speaking staff will be present to assist claimants.

• The center accommodates people with disabilities and those needing homebound assistance can contact the center during its normal hours of operation.

• For more information, call the center at 482-0792 or visit the center's website at warclaims.guam.gov.