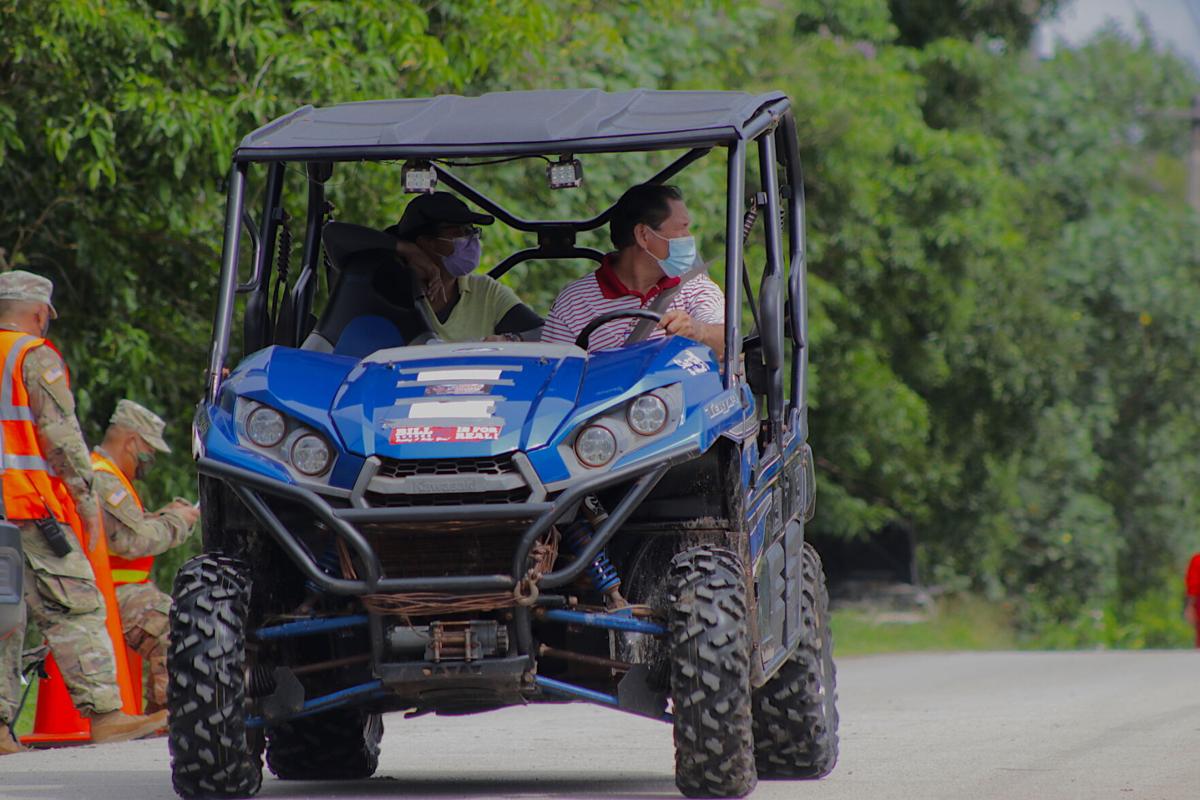 CLUSTER AREA: Department of Public Health and Social Services personnel use all-terrain vehicles to transport supplies on the third day of COVID-19 testing at the Gill-Baza and Zero Down subdivisions in Yigo on Monday. After three days of targeted testing at the Yigo subdivisions, 117 or 27.7% of the 422 people tested COVID-19-positive. Dontana Keraskes/The Guam Daily Post 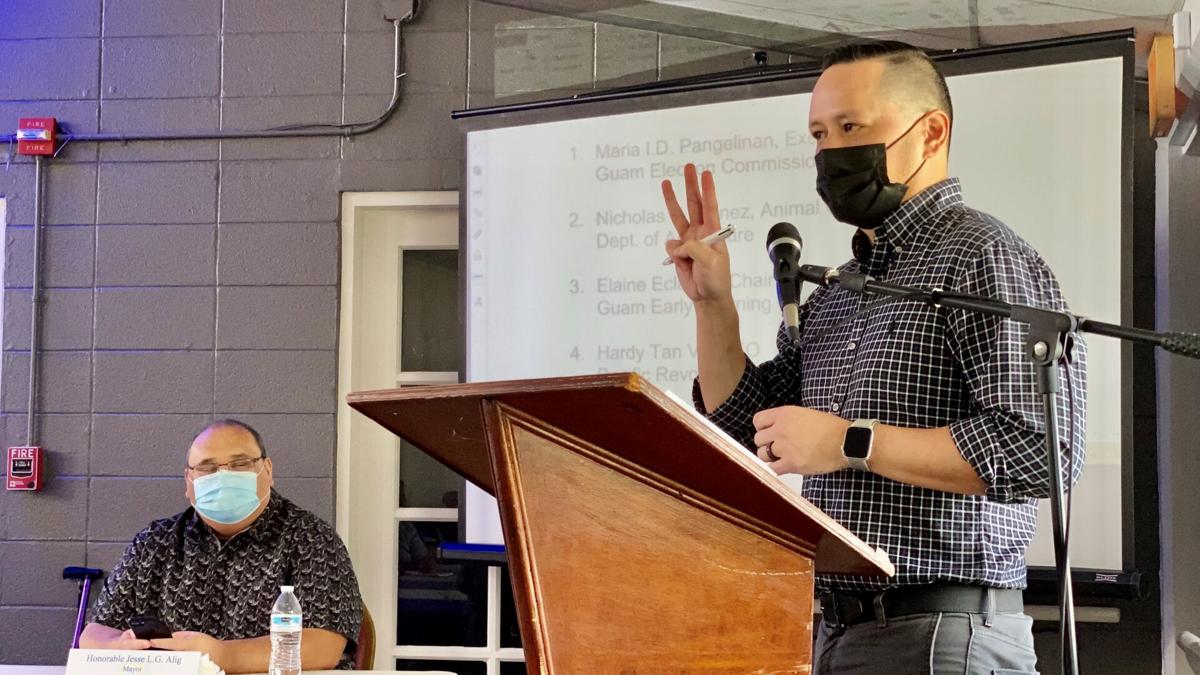 TARGETED APPROACH: Dr. Felix Cabrera, right, a member of the governor's physicians advisory group, gestures as he asks mayors on Wednesday to help identify their villagers who are 60 years old and above and considered high-risk for COVID-19 and hospitalization, as another targeted approach to control the coronavirus. Looking on is Piti Mayor Jesse Alig. Haidee Eugenio Gilbert/The Guam Daily Post 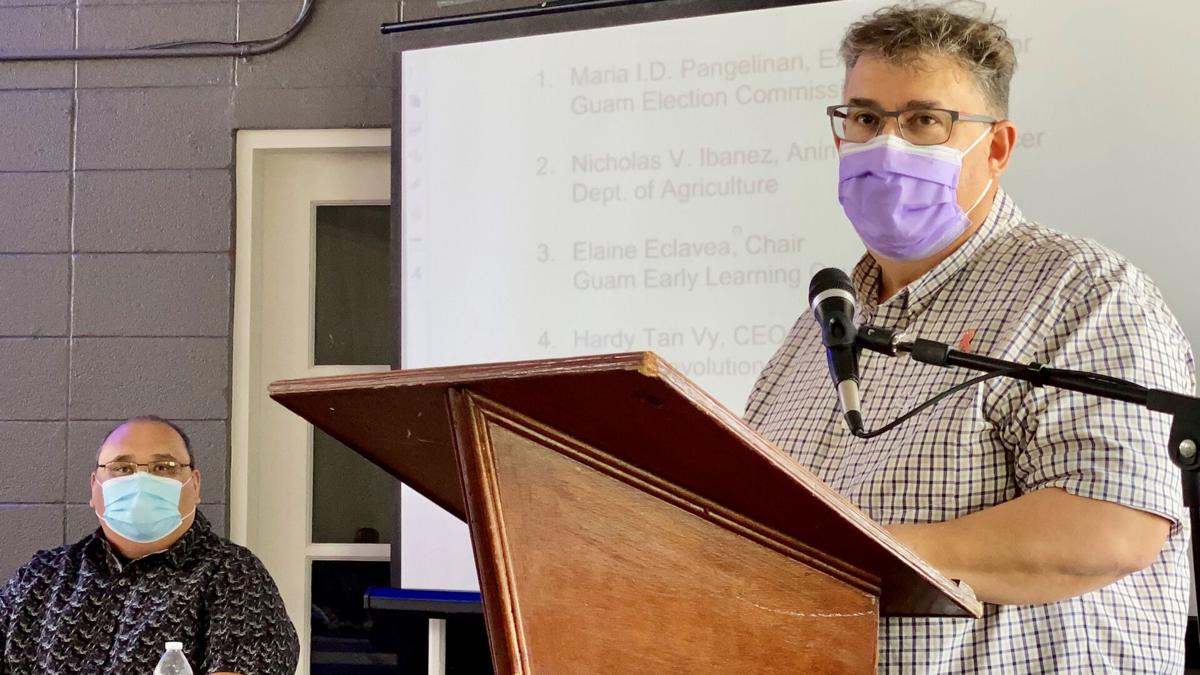 VILLAGE OUTREACH: Department of Public Health and Social Services Deputy Director Terry Aguon talks to members of the Mayors' Council of Guam about potentially working with Public Health to identify villagers who are 60 years old and above and considered high-risk for COVID-19 and hospitalization. Looking on is Piti Mayor Jesse Alig. Haidee Eugenio Gilbert/The Guam Daily Post.

Guam is "losing this fight" against COVID-19, partly because there is no clear and consistent message that testing should be free of charge to anyone with COVID-19 symptoms or who came into close contact with a positive person, a member of the governor's physicians advisory group told mayors Wednesday.

A portion of the population does not have health insurance.

Sinajana Mayor Robert Hofmann, vice president of the Mayors' Council of Guam, said people are still saying they are not getting tested because they cannot afford it.

On Guam, a COVID-19 test could cost about $150 per person without insurance.

Dr. Felix Cabrera, a member of the advisory group, said Gov. Lou Leon Guerrero's mandate is that if one has symptoms and is a close contact, "you should not be paying for your test, it should be free."

"We are seven months into this. We cannot let that be a barrier to the care because it's so critical in our fight," Cabrera said. "And let me be clear: We are losing this fight right now."

The 68th COVID-19-related fatality occurred at U.S. Naval Hospital Guam at 6:03 p.m. Tuesday. The patient was a 61-year-old man with underlying health conditions, complicated by COVID-19. He was admitted to Naval Hospital on Oct. 5 and tested positive upon admission.

The 69th COVID-19-related fatality occurred at Guam Regional Medical City at 5:15 a.m. Wednesday. The patient was a 60-year-old woman with underlying health conditions that were complicated by COVID-19.

Eighty-two newly confirmed cases were reported Wednesday out of 737 tested, according to the Joint Information Center. That's an 11% positivity rate, down from 15% in the most recent weekly average.

'We can still win'

Cabrera said Guam can still reverse the outcome of this battle.

"Every day, positivity rates go up, the number of positives go up, and our backs are against the wall, the hospitalizations keep going up. But that doesn't mean we’re down and out. We’re losing, but ... we can still win, and we can, and we will," he told mayors.

Last week, the governor said Guam is "now struggling to control" the second surge in COVID-19 cases as it modified quarantine rules and began reopening the economy.

The federal government authorized the release of some $1.63 billion for Guam to deal with the coronavirus pandemic.

Because the Department of Public Health and Social Services cannot do the testing by itself, it has reached out to tier 2 private clinics to do the testing and then get federal funds for reimbursement.

"We’ve been asking to have a clarification and making sure that everybody’s on the same page so that we have one message that goes out to everybody. And that they’re not going to be turned away and they're not going to have to pay out of pocket," Cabrera said.

Cabrera and Public Health Deputy Director Terry Aguon personally asked mayors Wednesday to help in identifying their villagers who are at least 60 years old and are considered high-risk persons because of preexisting conditions such as diabetes, cancer and high blood pressure.

They said mayors know their constituents well, and this will help save lives.

This is a new approach, besides going to high-risk areas such as Gill-Baza and Zero Down subdivisions in Yigo.

Once those high-risk persons or families are identified, Public Health will make sure they get tested and are "linked to some primary care" if they have comorbidities.

"It's a strong community approach," said Aguon, who answered mayors' concerns and questions about the process.

Cabrera said current data shows that if one is 60 years old and above, there's a 40% chance that person will be hospitalized if he tested positive for COVID-19.

"Out of 10 people, four of them are going to end up in the hospital. And out of that 10 people, one of them is going to die. And that's what the data is telling us," he said. "It doesn't have to be that way."

Cabrera said mayors also already know who the elderly in their communities are, especially those who receive food delivery and aid.

• Ensure the hospital is not overwhelmed with patients.

• Find specific ways that can keep some patients out of the hospital by getting care early.

"We think the Mayors' Council will be very instrumental in this. We have to identify high-risk areas, high-risk persons," Cabrera said.

Dededo Mayor Melissa Savares, president of the Mayors' Council, asked whether Public Health can check up on patients who've tested positive for COVID-19 and do not have any family on the island.

Guam Memorial Hospital had 62 hospitalized patients. Nine were in the intensive care unit and four needed ventilators to breathe.

Guam Regional Medical City had six COVID-19 patients. One is in the ICU.

Naval Hospital Guam had three patients. Two are in the ICU.

Guam has seen 3,968 confirmed and recorded COVID-19 cases since March.

Through three days of targeted testing at the Gill-Baza and Zero Down subdivisions in Yigo, 117 or 27.7% of the 422 people tested were confirmed COVID-19-positive.

Salas, who recovered from COVID-19, lost his 31-year-old daughter to the novel coronavirus. He said his daughter was hospitalized for shortness of breath and then was released, only to be hospitalized again and then die.

The mayor said he hopes this won't happen to others.

One of the officers called in sick and has been on leave. The other officer was identified through contact tracing and tested positive for COVID-19, JIC stated.

Both officers are in home isolation.

On Monday, the Guam Fire Department assisted DYA with disinfecting efforts at the Youth Correctional Facility. At this time, there are no residents at the facility who are displaying any symptoms of COVID-19, JIC stated. DYA personnel were tested Wednesday and results are pending.

Customer service offices for the Guam Waterworks Authority and Guam Power Authority in Hagåtña and Mangilao are closed because of one COVID-19-positive employee and a need to sanitize and deep clean.