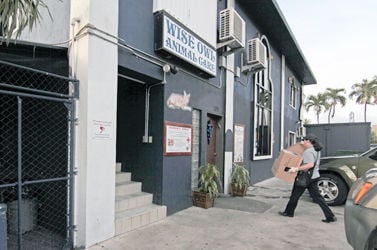 A Department of Public Health and Social Services worker carries boxes for evidence into the Wise Owl Animal Hospital yesterday as police and DPHSS personnel executed a search warrant for controlled substances at the clinic. Photo by Matt Weiss / Variety 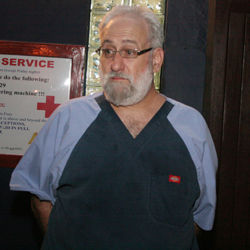 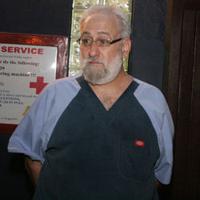 A Department of Public Health and Social Services worker carries boxes for evidence into the Wise Owl Animal Hospital yesterday as police and DPHSS personnel executed a search warrant for controlled substances at the clinic. Photo by Matt Weiss / Variety

The group executed a warrant that was issued by Judge Anita Sukola for an administrative inspection and search at the Tamuning veterinary clinic between 4 and 5 p.m.

The officers were authorized to inspect, search for and seize “any controlled substances kept or stored thereon in violation of the law,” the warrant said.

About 10 clinic employees were on the premises when the officers arrived and many were ordered out, said Paulette Marta, groomer and one of those ordered out of the clinic. As the employees waited outside, police searched several of their vehicles, Marta said. However, nothing was removed and there was no indication that anything was amiss.

Public Health staff entered the building with more than 10 cardboard boxes with "Government of Guam" markings. However, as of 7:30 p.m. the boxes had not been brought out of the building.

“They’re going through everything, every box, every cabinet,” said Gina Herrera, certified veterinary technician manager, who was permitted to stay in the clinic during the search.

About two hours into the search, Dr. Joel Joseph, veterinarian and owner of the clinic, came out, spoke to reporters and told them that while it was the first time his clinic had been raided, the episode was a continuation of the conflict between him and some members of the government of Guam and the local veterinary community.

The contention that led to the warrant was that Joseph’s Controlled Substance Registration (CSR) had expired and not been renewed. He said he had renewed it properly but a certificate had not actually been sent to him.

“The law states that my Controlled Substance Registration is valid while under investigation,” he said. “The people at the Department of Public Health know this. Now they’re declaring that I do not have a CSR. Because I do not have a CSR, they are sending 10 or 20 people here, more than half of whom are police.”

Joseph said he will appear before Superior Court Judge Vern Perez on Friday in a previously scheduled hearing related to the CSR issue. “I believe they’re doing this in order to try and bolster their case or change the things that are going on this Friday,” he said.

He said he uses few controlled substances in his practice and has few on the premises. “The biggest thing they’re talking about is possibly a little bit of mislabeling of some drugs,” he said. “Real simple – the drugs were out of date; they’re controlled drugs and maybe we could extend them a little bit and I admit maybe we do. But when they get too far out [of date], we wrap them up and they get put off to the side and quite frankly, we’ve been waiting for all this CSR stuff to get cleared up so we can properly dispose of them.”

Joseph said the police were taking “all my medical records. They are taking drugs that are not controlled drugs.”

He added that he has not used controlled drugs since January. “I really don’t know what they’re after here because the law says I have a CSR,” he said. “The fact that GovGuam simply won’t give it to me is another issue. We’ve been taking it to the court and it’s been working its way through.”