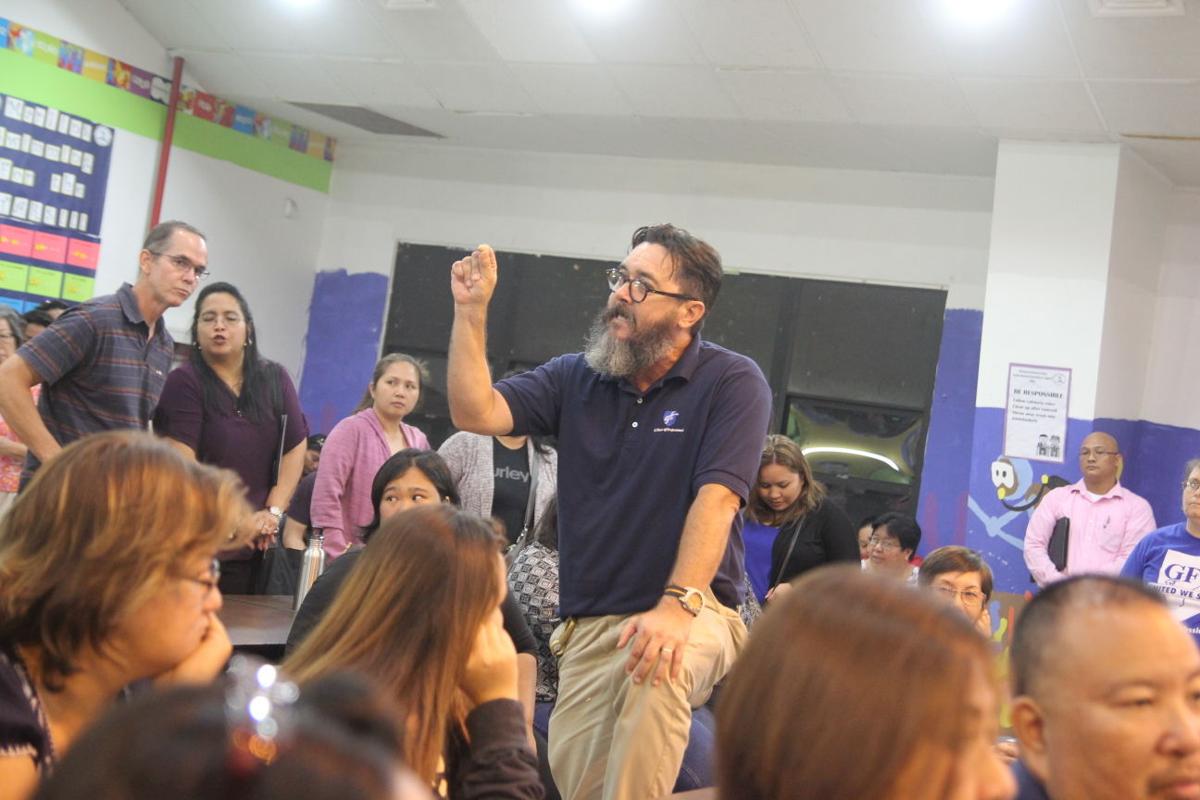 FEDENKO: Tim Fedenko, president of the Guam Federation of Teachers, exhorts teachers to work together to stand up for their rights during a break in a Guam Education Board meeting at Machananao Elementary School in Yigo on March 15, 2016. Post file photo

FEDENKO: Tim Fedenko, president of the Guam Federation of Teachers, exhorts teachers to work together to stand up for their rights during a break in a Guam Education Board meeting at Machananao Elementary School in Yigo on March 15, 2016. Post file photo

Two members of the Guam Education Board don’t see eye to eye when it comes to the Guam Department of Education's resources and their impact on student achievement.

The disagreement arose during a recent special board meeting to approve GDOE’s fiscal 2022 budget spending plan.

The constraints of the $206 million budget mean GDOE will have to juggle finances to ensure essential operations are covered and employees are paid. But it doesn’t leave much to hire much-needed teachers and support staff.

The difference in opinion centered around student achievement and the resources GDOE has had over the last 30 years as it related to the budget.

“You can’t run the ship without any sailors and this is a big ship. I am not blaming, don’t get me wrong, I am here because I am disappointed not with you but the people that fund our department. Education is always first but they don’t give us money,” said Guam Federation of Teachers President Tim Fidenko.

Personnel costs for GDOE amount to $187 million, which leaves $18 million for essential operations, like keeping the lights on at the schools, the cost of which often fluctuates. This leaves GDOE with a budget shortfall of $25 million.

GDOE has managed to get by over the years, dealing with staffing shortages, and the lack of textbooks for students, but this year’s budget was appalling, according to Fedenko who blamed lawmakers and the governor.

'We've got to start standing up'

“Never have we ever had all the money that we need. Who's to blame? Not the hard-working people here. That’s pretty bad, let parents know. Should we shut off the lights, open up the doors like in 1945? This is the reality of it; let’s call it what it is. These schools are deplorable. I can’t believe it and it hasn’t changed in 30 years, I’ve seen it firsthand at the same school. We’ve got to start standing up,” Fidenko said. “What are we going to do? We can’t expect that we produce educated people when we don’t have the people to educate them.”

GEB member Robert Crisostomo, however, did not agree with placing the blame regarding student achievement entirely on the resources GDOE has had over the years.

“I submit to Fidenko that for the last 30 years, we’ve had certified teachers, we had the people but the scores never increased. I don’t understand; we keep pouring money into the department. This is the only organization I know of where we pour money into it, but we have no expectations of what is coming out of it. The public should be demanding more of us. As a board, I think we should be demanding more of ourselves,” Crisostomo said.

Crisostomo believes that GDOE’s efforts over the years as well as the budget and the State Strategic Plan development heading into the current school year have lacked successful results.

“If it doesn’t result in student achievement and success we are not doing anything. We are just meeting," Crisostomo said.

Crisostomo believes that as GDOE moves forward with the spending plan, the outcome should always be measured by student achievement, facilities improvements and increased safety.

“We have not moved the needle on student achievement in that time; we are short already, we’re asking for more money but the return on investment equating to the money spent.”

Fidenko disagreed. “So he’s telling me we’ve had full staff teachers all our lives. I think he’s wrong. We haven’t had all the sailors on the ship nor have we had the bullets in the form of books to teach the kids,” Fedenko responded. “So I don’t think that we’ve been throwing money at things and not getting what the result is. It’s pretty amazing that we’ve had this result in – even giving anyone an education.”

Based on GDOE preliminary student enrollment numbers, there are roughly 26,000 to 27,000 students.

“Most schools are basically short of where they ought to be under our collective bargaining agreement. So I don't anticipate that we’ll be holding back from hiring school-based staff positions. So we're going to want to see what we can do to hire the positions, it may not be the 78 vacant positions once we cross level. It maybe a lower number 30 to 40, but those will definitely be the priorities,” Fernandez said.

"Education is always first but they don’t give us money." – Tim Fedenko, president, Guam Federation of Teachers