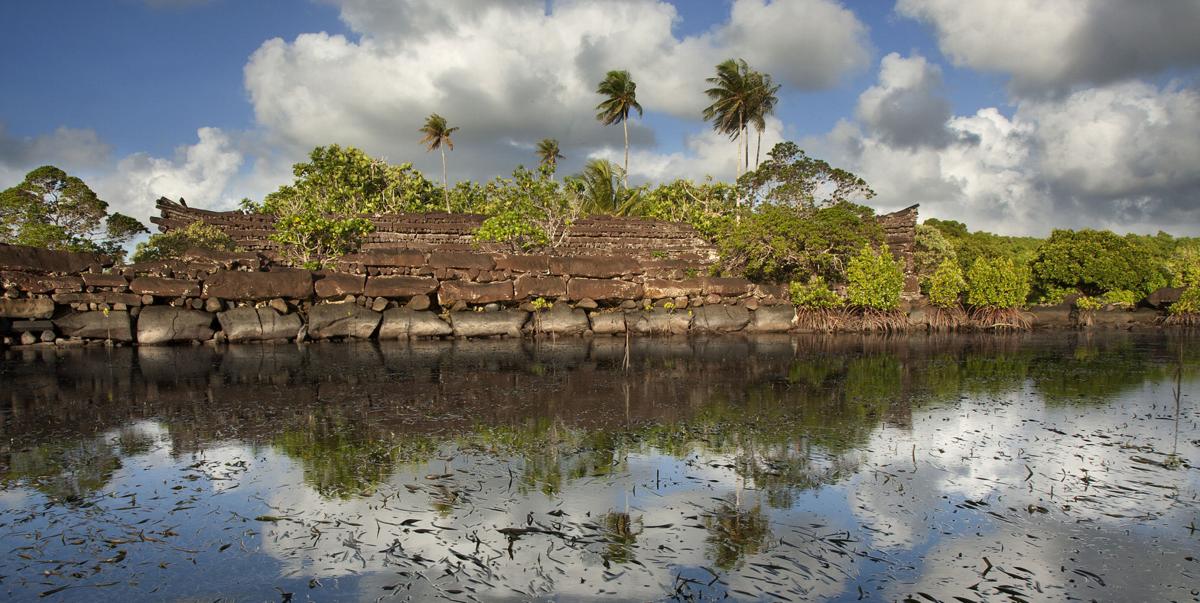 A view of Nan Madol from sea kayak. Photo by Alex Zuccarelli

Walls of stacked prismatic basalt rock characterize the inner enclosure of funerary complex, Nan Douwas - the most dramatic example of megalithic architecture at Nan Madol. This image shows the front walls and entrance of the second enclosure, surrounding the great tomb. Photo by Alex Zuccarelli 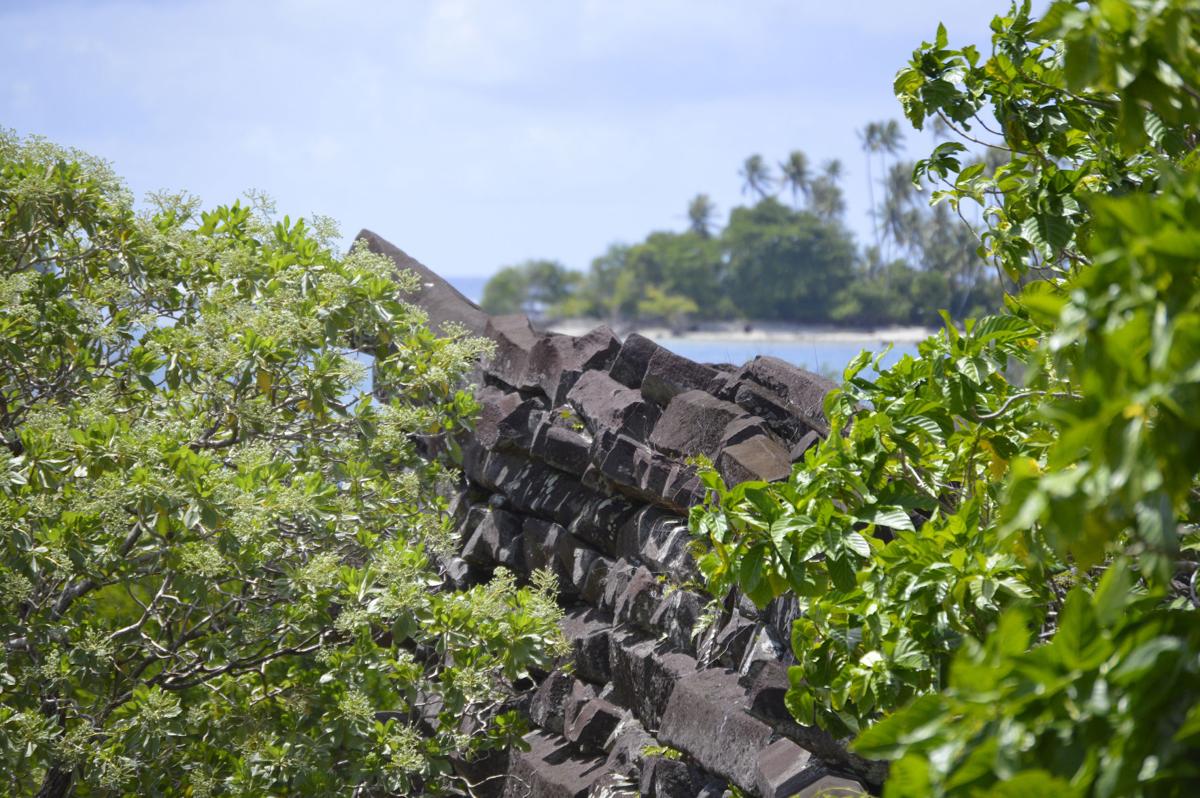 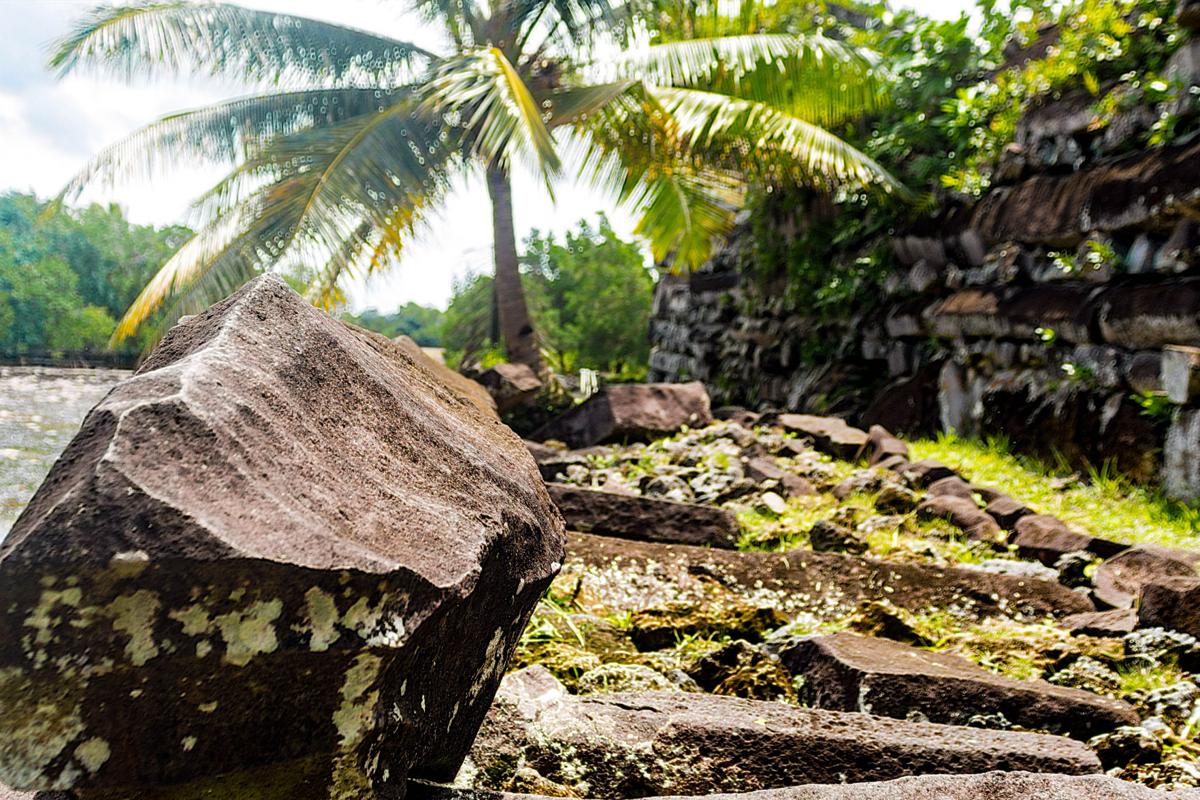 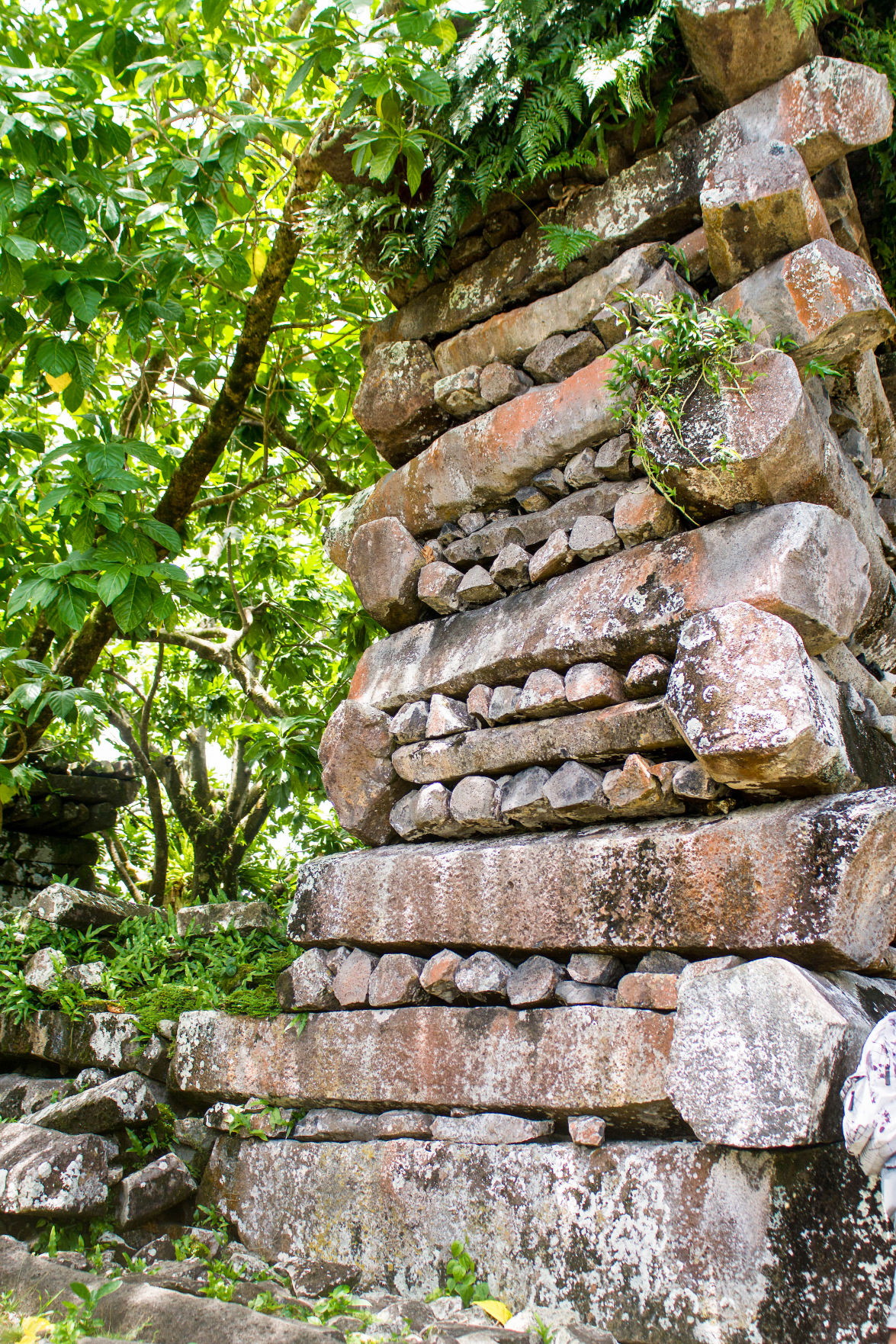 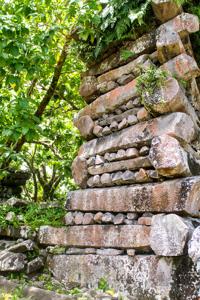 The entry gate to Nan Dowas. Photo by Bill Jaynes 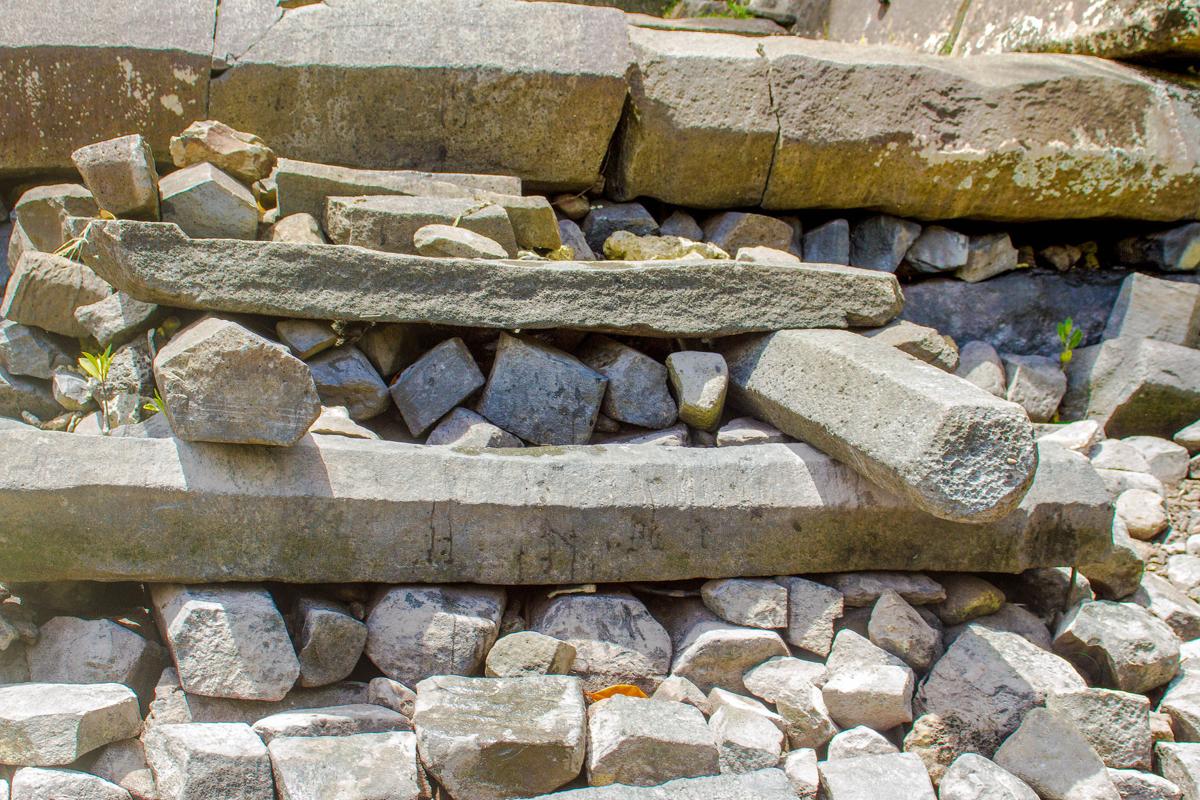 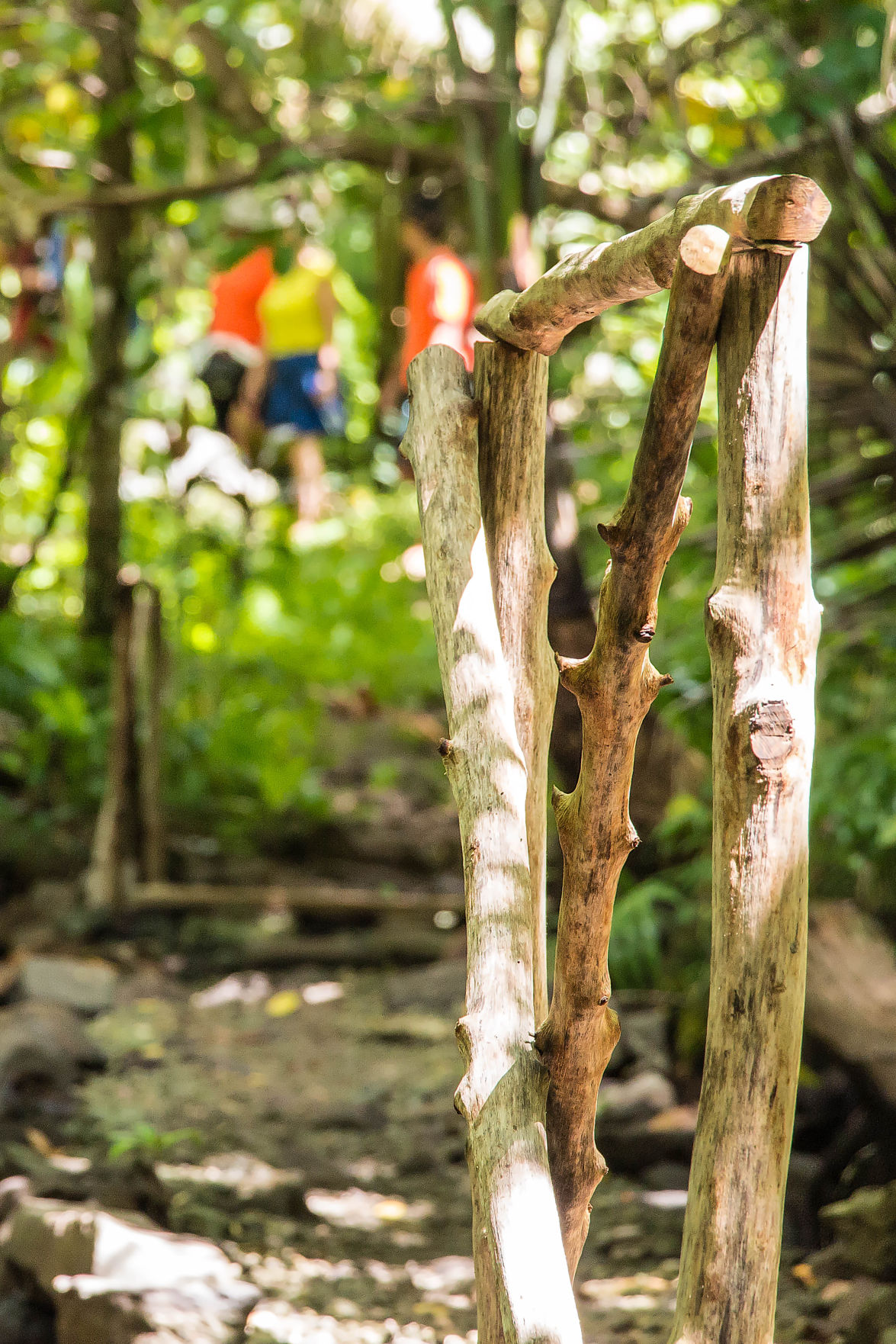 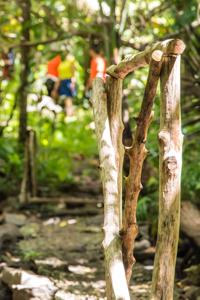 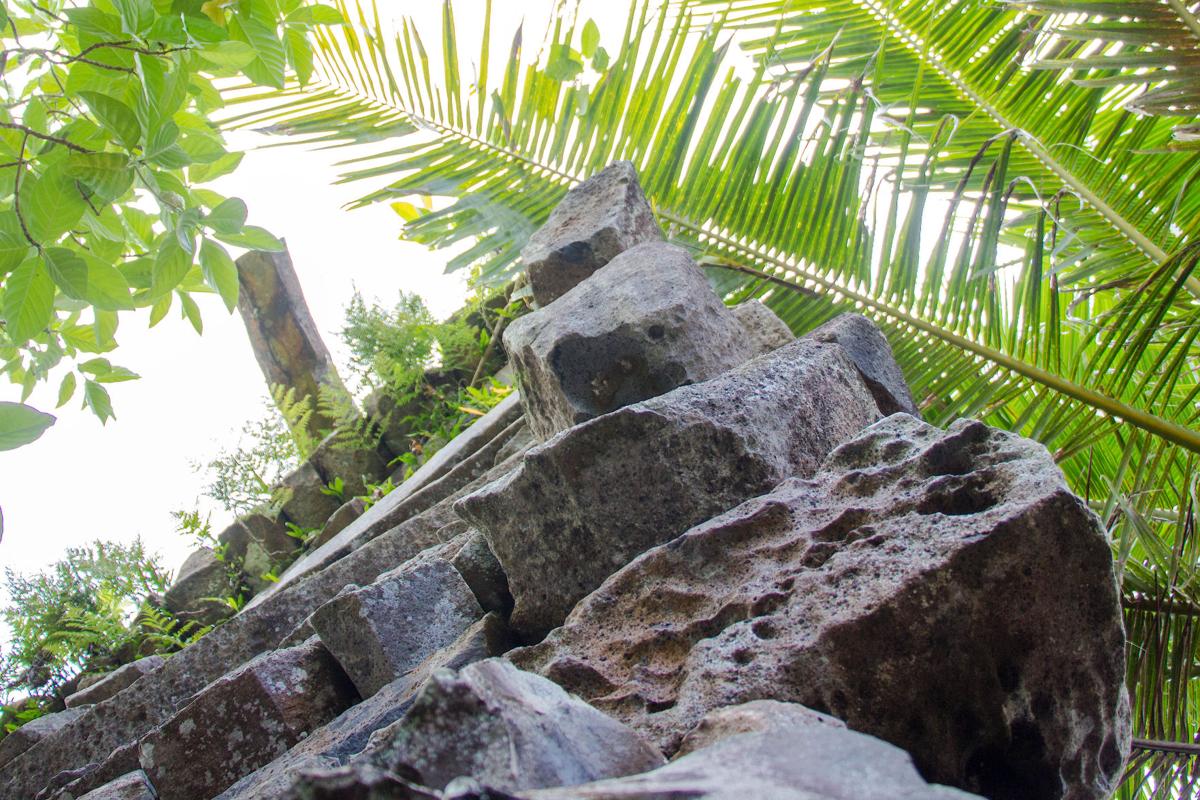 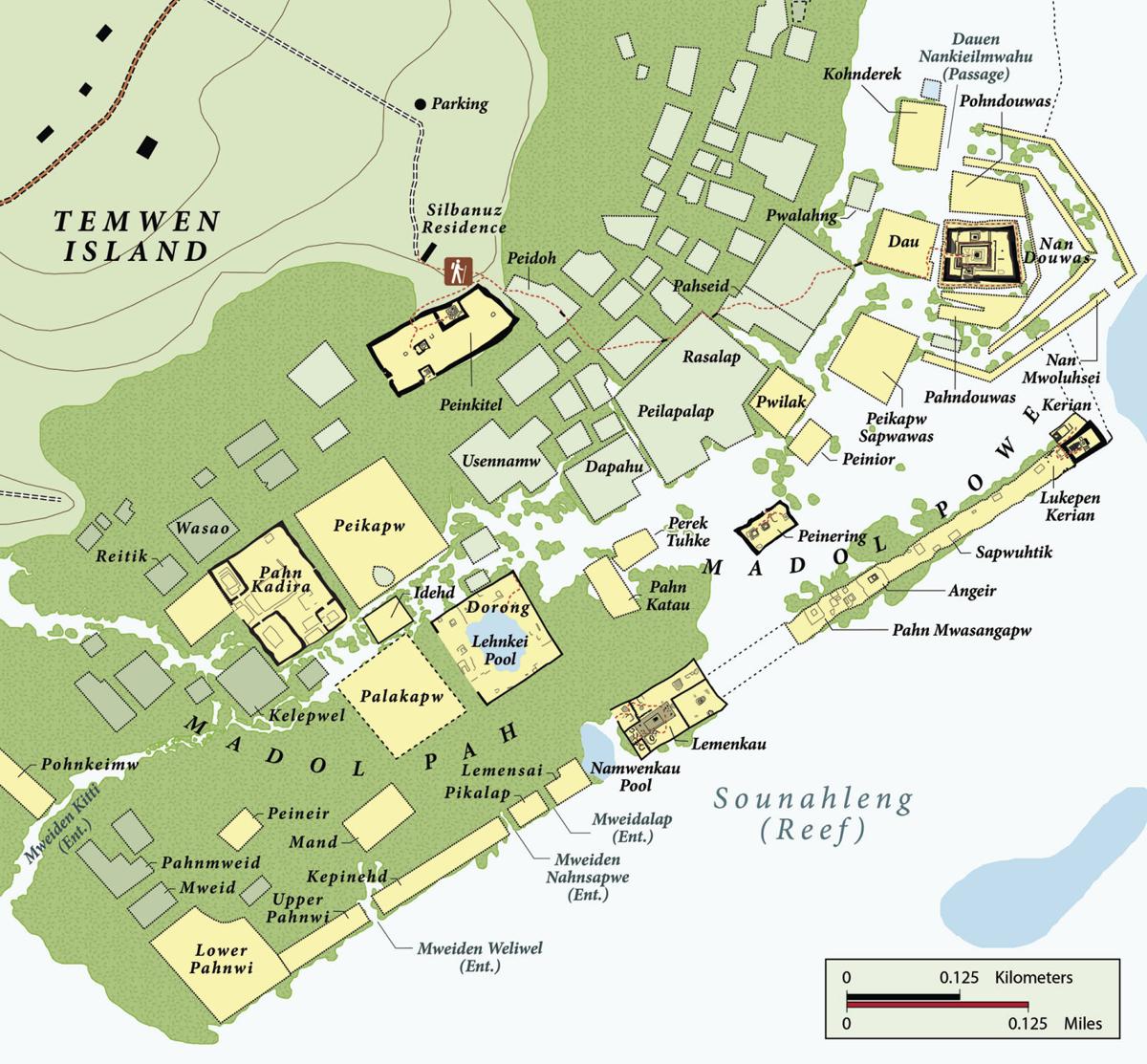 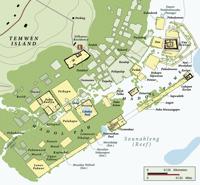 Map of Temwen Island and the surrounding islets and structures of Nan Madol. By Alex Zuccarelli

A view of Nan Madol from sea kayak. Photo by Alex Zuccarelli

Walls of stacked prismatic basalt rock characterize the inner enclosure of funerary complex, Nan Douwas - the most dramatic example of megalithic architecture at Nan Madol. This image shows the front walls and entrance of the second enclosure, surrounding the great tomb. Photo by Alex Zuccarelli

The entry gate to Nan Dowas. Photo by Bill Jaynes

Map of Temwen Island and the surrounding islets and structures of Nan Madol. By Alex Zuccarelli

Pohnpei, FSM—As United Airlines’ “island hopper” flies, the mystical site of Nan Madol is only two hops away from Guam on the Micronesian island of Pohnpei.

Situated on the densely forested island’s southern coast of, Temwen (pronounced chum-one) in the municipality of Madolenihmw, Nan Madol consists of 92 manmade islets constructed from huge basaltic rock columns – the largest of which weighs approximately 60 tons. A recent geological study found that more than 40 percent of the hexagonal basalt columns at Nan Dowas, the main ceremonial center of Nan Madol, were inexplicably moved from Sokehs on the other side of the island to the ancient city by means which no one has yet been able to convincingly explain. While some archaeologists assert that the remainder of the huge columns were transported from other quarry sites on the island – none of them particularly close by – Pohnpei’s oral history says that all of the rocks and coral boulders came from Sokehs. That, however, has not been geologically proven.

The site’s name means “spaces between,” an allusion to the network of canals that both separate and connect the various structures. In more recent times, these same features led to its bestowal of the moniker “the Venice of the Pacific.” When inhabited, each islet had its own distinct purpose. Some were used as royal tombs, hospitals, or for the preparation of food and coconut oil, while others were for the pounding of sakau – the potent form of kava still heartily consumed on Pohnpei today. One islet is even said to have served as kind of ancient stone aquarium housing sea turtles.

Far more than just an unexplained architectural wonder, Nan Madol remains the epicenter of Pohnpeian tradition and culture. As the legend goes, in approximately 1400 A.D. the Kosraean-born warrior Isokelekel led 333 men, women and children in a rebellion against the tyrannical Saudeleur Dynasty that occupied Nan Madol. Upon its overthrow, Isokelekel, which means "shining noble" or "wonderful king,” established the more decentralized nahnmwarki system of regional cultural and community leaders that remains to this day.

In a seeming contradiction, Nan Madol is held in such reverence and awe among Pohnpeians that a large percentage of them have never visited. Many locals believe that spirits live throughout the island and are most prevalent at Nan Madol; afraid to offend them, Pohnpeians speak hushed admonitions of those who did not respect the site and ended up sick. Some even claim that visitors have died after denigrating the site. As such, it is a place to be treated with the utmost respect by locals and tourists alike.

Construction of the “not-nearly-as famous-as-it-should be” city by and on the sea began in 500 A.D. and continued for the next 500 years.

“It’s older than (the famous stone heads of) Rapa Nui; older than anything built in Tonga, Hawaii or anywhere else in the region,” said Augustine Kohler, FSM’s National Historic Preservation Officer.

Nan Madol has hosted several hundred visitors since its inscription as a World Heritage Site. According to Kohler, many of these day-trippers went during the most recent Pacific Islands Forum (PIF), a multi-lateral meeting of the leaders of 16 Pacific Island nations hosted in Pohnpei this year. Most delegations, including their heads of state, took the opportunity to visit the site, as did PIF delegations from development partner nations and agencies.

And Nan Madol may well soon see an influx of many more visitors, particularly from Japan. Two weeks ago a crew from the Tokyo Broadcasting System completed film work on a documentary on the site, expected to air throughout Japan in November and likely to inspire more interest in the site as a destination.

At present, the stone pathways and footbridges through the mangrove are extremely well maintained and accessible to most tourists. Yet the infrastructure at Nan Madol is “nowhere near ready” to accommodate a large spike in visitors, Kohler said. “Our leaders are informed and well aware that inscription [as a World Heritage Site] is just one step. I mean, the hard work is after the inscription.”

The large team of people, both local and international, who’ve worked on the preservation of Nan Madol have big dreams for the site. They envision a plush tourist center with exhibits and historical videos where tourists can learn all about the ancient structure before heading down the trail to explore. Kohler said that the FSM is already working on at least one video, but the tourism center itself will require funding the small nation doesn’t currently have.

The FSM expects to hear soon from a group of experts with International Council on Monuments and Sites (ICOMOS), who will provide advice on plans for preserving the site after conducting a “Reactive Monitoring Mission.” Anticipated expert advice includes: how to preserve the site by stabilizing the structures, some of which have begun to collapse; how to solve the problem of the encroachment of the mangrove forest; and, what can be done regarding the siltation of the waterways among the structures without endangering the site itself.

After that visit it will be the FSM’s responsibility to follow the recommendations or even expand upon them for a multi-year phased plan of action to preserve the site.

“I really don’t want to do any major cleanup or anything [to Nan Madol] until I get the recommendations from the experts,” Kohler said. “So the plan is for us to wait until they come and do the studies and give us the recommendations, and we’ll go from there.”

Meanwhile, the site remains open to visitors, though organized tours are limited. Without a kayak or canoe, the only excursion available is a walking tour to Nan Dowas, the central structure of the ruins. The other structures cannot be seen from Nan Dowas or the trail.

Nan Madol also does not have a single point of collection for admission fees. The entry system remains rather informal, and families in the area expect payment in exchange for granting access to their land. First, visitors can expect to pay $1 each, paid to the family at the top of the long driveway to the parking area. Another $3 goes to the family whose house sits at the trailhead to the site. Finally, the trail ends at a point across a shallow channel from Nan Dowas. After crossing that channel, a representative of the region's nahnmwahrki (the king of the municipality of Madolenihmw and guardian of Nan Madol) will collect an additional $3.

Now you may enter the ancient city…

Emerging from the dense jungle, it’s hard not to feel like Indiana Jones discovering some lost civilization as you encounter the first emerald-green canal separating terra firma from the series of massive, high-walled stone structures in various states of majesty or disrepair. Some seem fairly intact; with others, it can be difficult to discern their original form and purpose. With crashing waves forever advancing upon the easternmost islets and nearly all the less tread upon ones sprouting coconut and pandanus trees from piles of basalt, both the sea and mangrove forests appear determined to claim these islets as their own.

Nan Madol currently has no on-site tour guides available to explain to tourists what they are seeing, but Clara Halvorsen of Pohnpei Visitors Bureau (PVB) says that there are a few independent tour guides who can provide talking tours. However, they’re not particularly easy to find. None are listed in the phone book or online. PVB can help to organize an independent tour, but it is suggested that those arrangements be made in advance by contacting them at pohnpeivisitorsbureau@gmail.com.

While this may cause a few logistical headaches, it can also prove to be a major bonus since it increases the odds of having the entire site to yourself. It’s not uncommon to spend hours wandering around Nan Madol and not encounter a single other tourist, save for those you’re traveling with. Bring a snorkel and mask to explore the outer edges of the site where the reef drops down into a deep blue abyss, where small reef sharks and rays pass by.

While visitors can wade and swim through the canals or cross over wooden bridges, the best way to see Nan Madol is by kayak or canoe. That trip, however, can only be accomplished during high tide. Unfortunately, Halvorsen said PVB is unaware of anyone currently offering canoe or kayak rentals in Pohnpei. There is a dearth of tourism operators serving the Nan Madol area, but several told the Sunday Post that it is something they might consider investing in if the market looks to be sustainable.

Besides the Nan Madol World Heritage Site, there are a remarkable number of eco-tourist adventures available in Pohnpei. Tourists often combine a tour of the Nan Madol ruins with a short, refreshing hike to Pohnpei’s famous Kepirohi Falls. These stunning cascades are on the way to Nan Madol from Kolonia, the state capital of Pohnpei and the island’s sole town of any significant size.

Bill Jaynes is editor of The Kaselehlie Press, a Pohnpei-based newspaper covering the Federated States of Micronesia.

No one should visit "the Garden Island of Micronesia" without first consulting the excellent travel website, Pohnpei Eco-Adventure, by Alex Zuccarelli. It offers descriptions of hotels and restaurants, names and contact information for organized tour companies and freelance tour guides, as well as detailed maps to download. Zuccarelli's printed maps are available at several stores on island, as well as at Pohnpei Visitors Bureau.  http://www.pohnpei-adventure.com