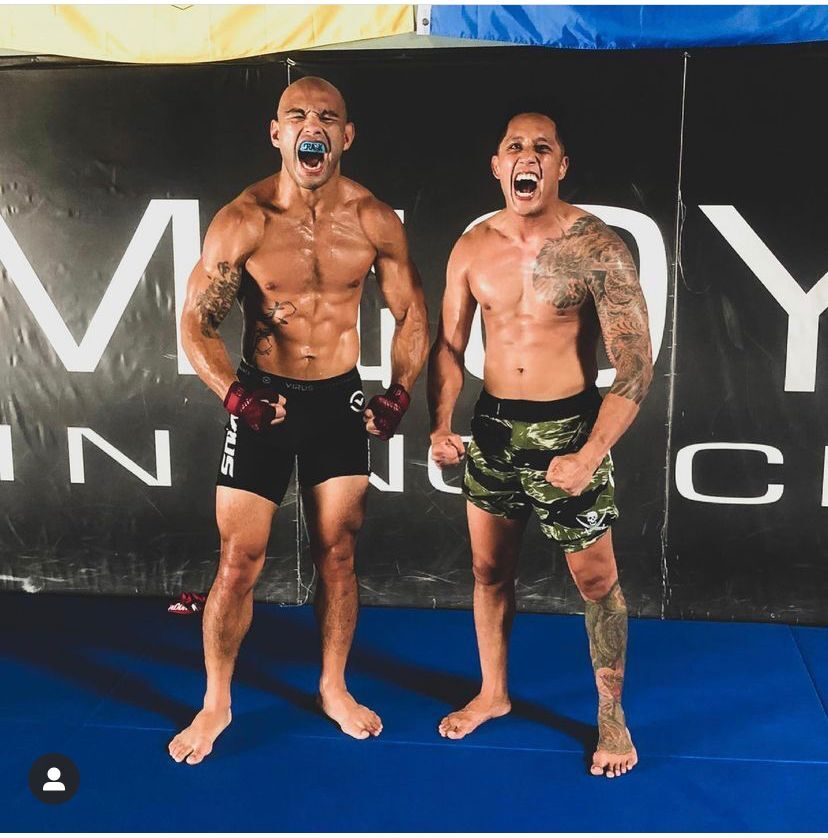 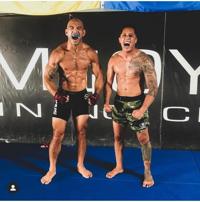 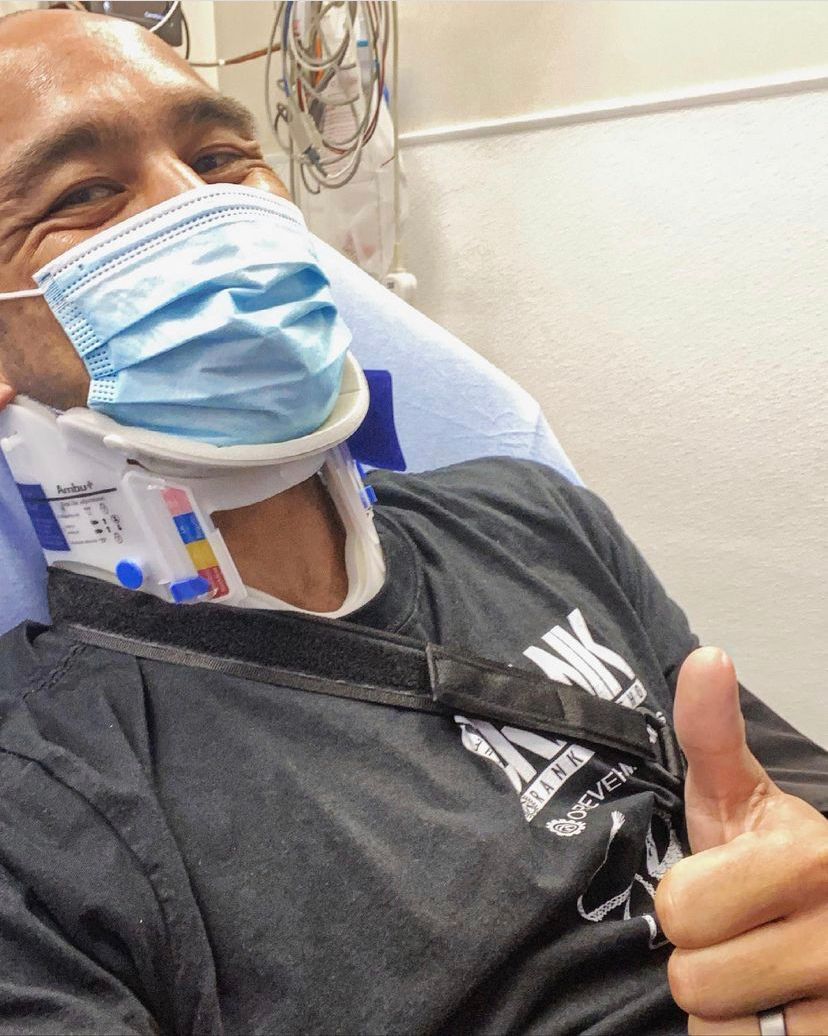 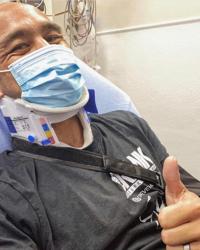 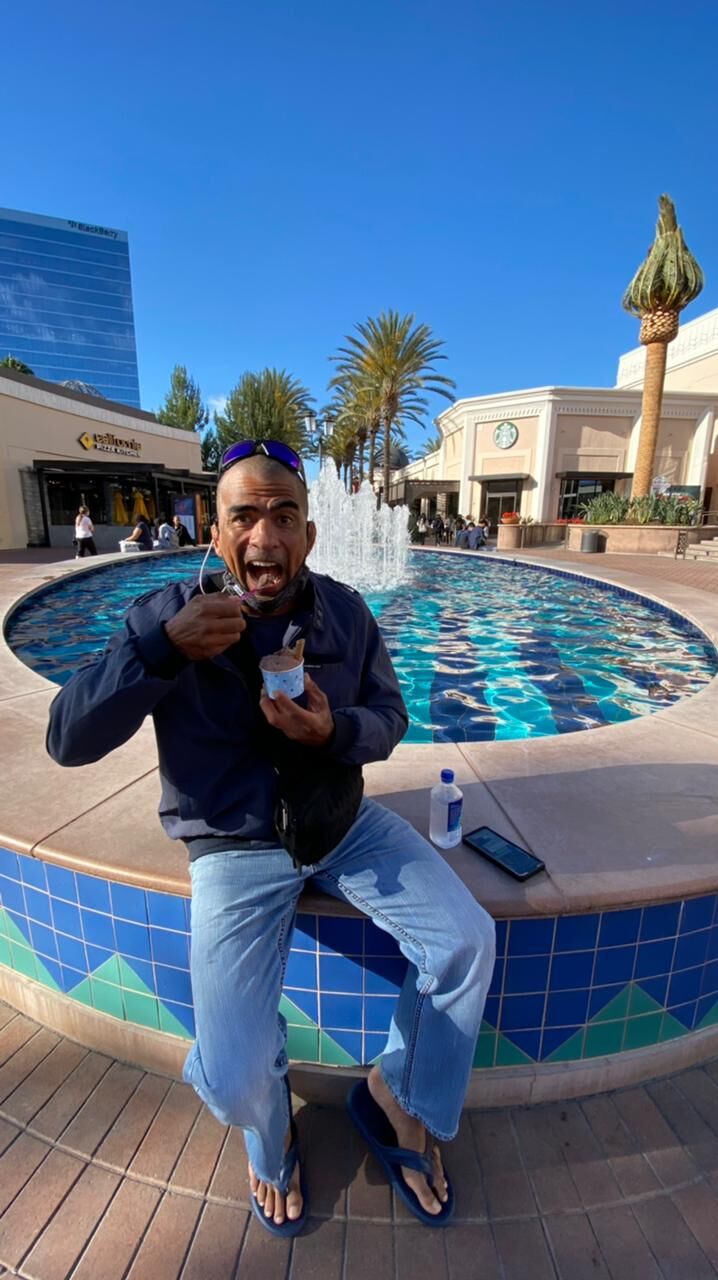 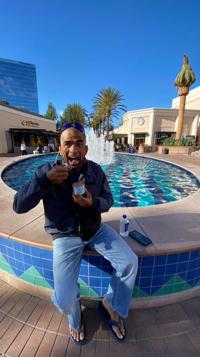 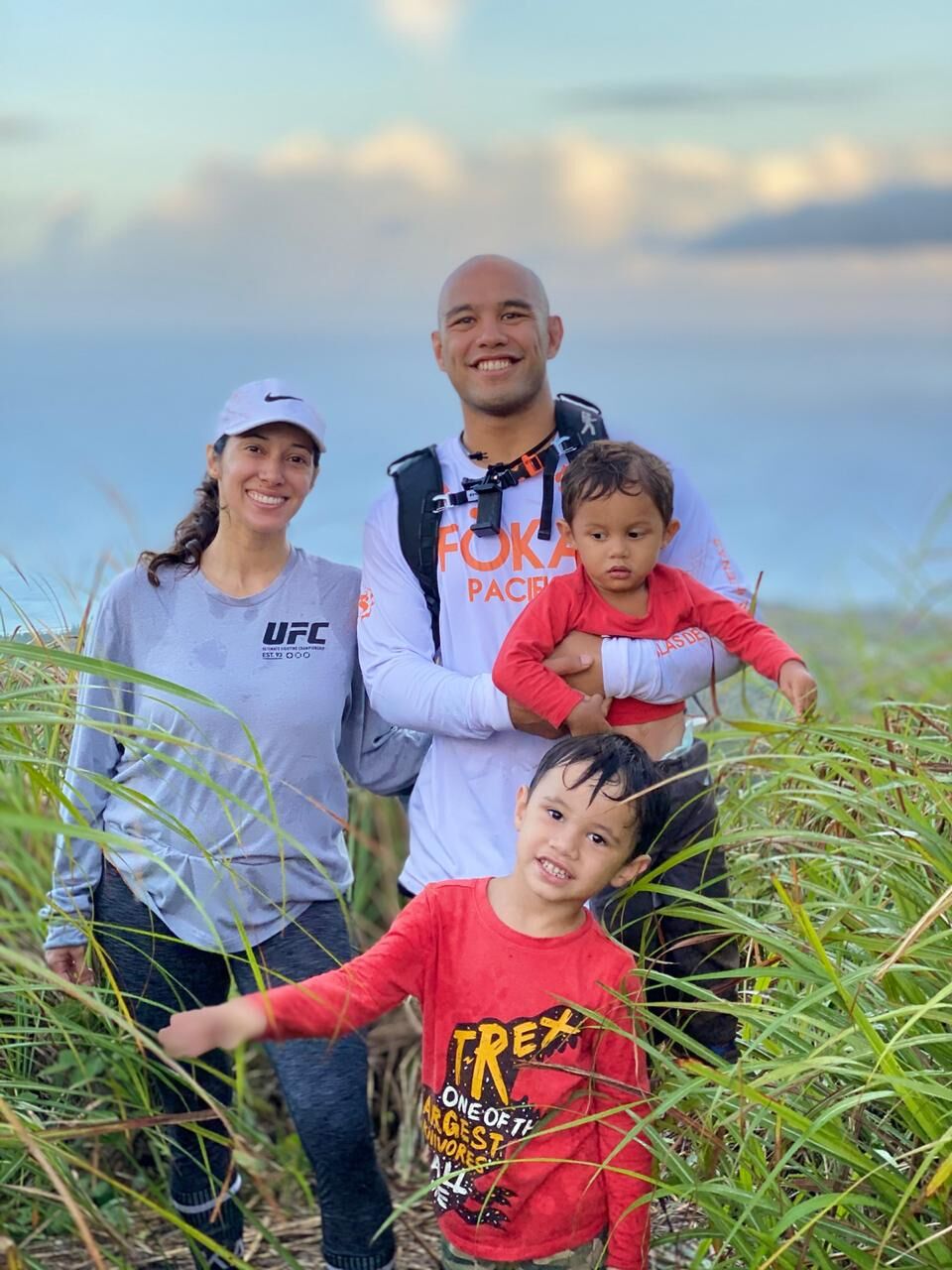 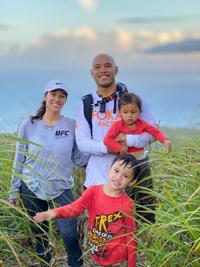 INAFA' MAOLEK: In this file photo, Frank "The Crank" Camacho is hiking with his wife, Sarah Filush Camacho, and sons, Franklin and Rocky (being held). His youngest child, three-month-old Catalina, was born after this photo was taken. Photo courtesy of Frank Camacho 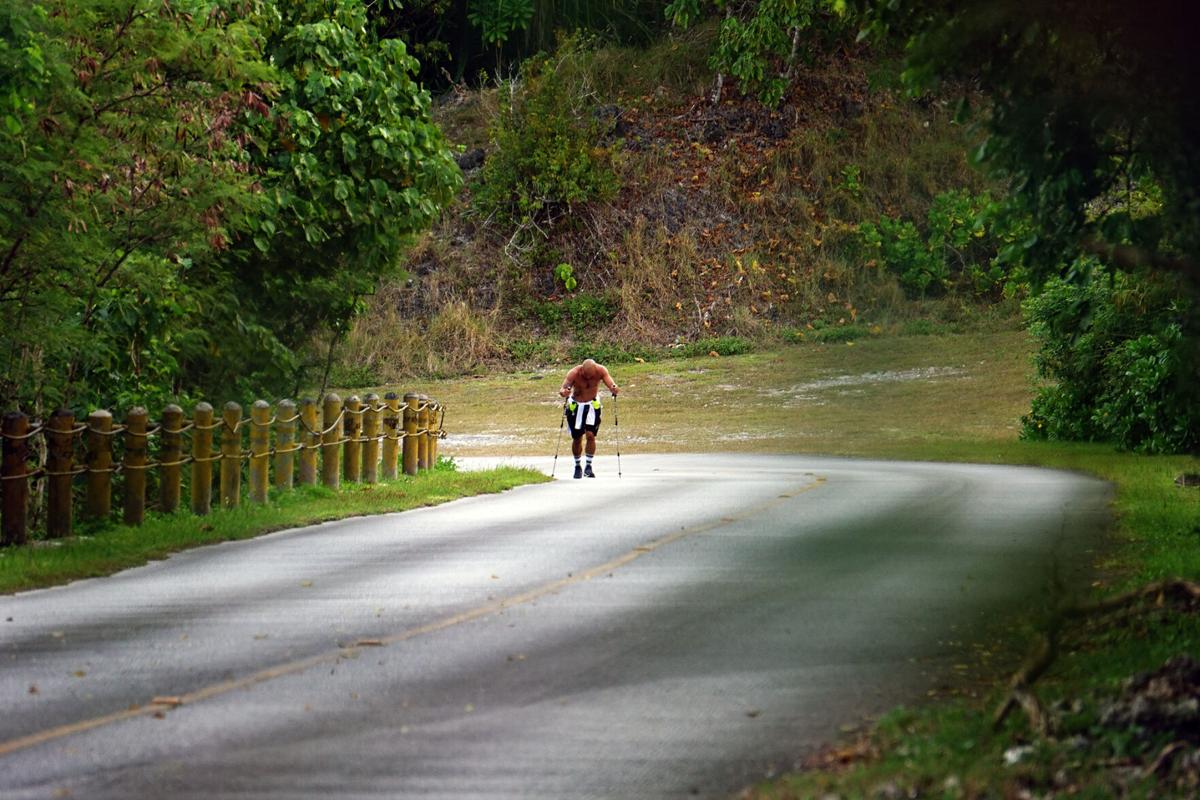 END TO END: After completing his 24hr run/walk starting from the village of Malesso' and ending in Yigo, Frank Camacho rehydrates as he decides to tackle the long winding hills of Ritidian Point in this February file photo. Camacho and his corner manager, Cuki Alvarez, survived a five car collision Monday evening (PST).  Camacho, who was slated to fight in UFC 263 on June 12, will not be competing due to injuries sustained in the accident. Haruo Simion/The Guam Daily Post

INAFA' MAOLEK: In this file photo, Frank "The Crank" Camacho is hiking with his wife, Sarah Filush Camacho, and sons, Franklin and Rocky (being held). His youngest child, three-month-old Catalina, was born after this photo was taken. Photo courtesy of Frank Camacho

END TO END: After completing his 24hr run/walk starting from the village of Malesso' and ending in Yigo, Frank Camacho rehydrates as he decides to tackle the long winding hills of Ritidian Point in this February file photo. Camacho and his corner manager, Cuki Alvarez, survived a five car collision Monday evening (PST).  Camacho, who was slated to fight in UFC 263 on June 12, will not be competing due to injuries sustained in the accident. Haruo Simion/The Guam Daily Post

While the disappointment in being unable to compete is heartbreaking and the sacrifices in time and money have been extensive for everyone involved, Frank “The Crank” Camacho said he is keeping it all in perspective after a five-car crash on a California freeway Monday evening (Pacific Standard Time) resulted in him being scratched from the UFC263 fight card.

“Physically a little wrecked! But, mentally and spiritually stoked and grateful,” Camacho said, reflecting on a chaotic 24 hours. “But (the crash) really put in it perspective. … UFC is cool. Fighting for the island and myself is cool. But all don’t matter when six feet under.”

Camacho’s original corner manager, Cuki Alvarez, who flew out from Saipan to be in his corner for one of the bigger fights of Camacho’s career, was in the car with Camacho. He shared the news of the accident with the island via Instagram.

“Earlier today @frankthecrank and I were involved in a multiple car accident on the 405 Freeway on our way back from Redondo Beach enroute to Irvine, CA. We are OK! The other 4 vehicles didn’t fair so well," Alvarez stated in the IG post. Camacho suffered herniation on his C7 and T1 vertebrae.

The removal from the card is Camacho’s latest setback. In September 2020, Camacho was scheduled to fight Brok Weaver, but also had his fight canceled after he tested positive for COVID-19.

‘By the grace of God’

“A few millimeters, a few milliseconds – and we’d have been returning home in two boxes,” Camacho said.

Comparing the accident to a movie scene, Camacho said he still doesn’t know how they were able to walk away. “By the grace of God,” Camacho said, giving thanks for the opportunity to live another day.

“Car hit us, swerved into the concrete column, bounced off the concrete wall and flew over the hood of my truck and onto a Ferrari,” he said. “All this was happening while trying to keep my truck from spinning and the car was 45 degrees almost perpendicular to the freeway. Cars were piling up rolling and metal flying everywhere still at around 70-80 mph.”

He said everything slowed down and he and Alvarez just watched it all through their windshield.

“Cuki … was supposed to corner me for a big fight. Little did I know, that he would be there to corner me, corner us driving out of the fight for our lives,” he said.

As they passed it, the view in the rearview mirror became a mess of cars, metal and glass.

“It just wasn’t our time. ... I'm truly grateful,” Camacho said with Alvarez echoing his sentiments in the background.

Putting it into perspective

Talking with Camacho the day after the crash, he admits to still being in disbelief at walking away from the metal pileup with “only four herniated discs.”

“I really appreciate the love, the support and the prayers,” Camacho said of the outpouring of support from the island community. But, he reassures the island, there is no need to be somber. The accident is an affirmation of what life is about.

“Me and Cuk … we are eating ice cream!! We’re celebrating this day! I’m not being somber at all,” he said. “Dude, I missed the fight. Cuki flew how many hours to get here for one day. But, dude, we survived!”

In fact, if the island could take something from the accident, it’s not the loss of a fight, but the realization that people and time matter.

“Just put it in perspective … I just want people to understand … take that extra time, hug your kids. Call someone you haven’t spoken to in a long time, or tell someone you love them. But, holy moly! We are celebrating life right now,” he said.

His moment of epiphany came in the immediate aftermath of the accident.

Pulling off to the side of the road, away from the pile up, Camacho freely admits he started crying.

A picture of his wife, Sarah, and his three-month-old daughter, Catalina, boarding the plane to Hawaii flashed in his mind. Describing the moment, Camacho quieted amidst a torrent of descriptions.

And, like the ultimate corner, Alvarez supplied the words, “it was a reality check.”

Camacho agreed, “yeah, it was a reality check … Cuk was calming me down … I said to him, ‘Bro, I’m so happy because Catalina was gonna come see her daddy fight. And, in millimeters and milliseconds, it could have costed her not having a daddy for the rest of her life, which broke my heart.’”

The sacrifices that come with making it in professional sports is real, Camacho said, listing the financial costs of diets, training, off-island fight camps and coaches in addition to the more intangible costs – time away from family, missing key milestones.

“I am bummed about the fight and all the sacrifices and money and time away,” he said. “But nothing can buy the time back with my family.”

For those who know Camacho, the inafa’ maolek spirit is an integral part of his life philosophy. And, while the fight may not be in the cards right now, Camacho is counting his blessings and looking forward to the good things life has to offer.

“Blessed to hone the ‘inafa’ maolek’ spirit – helps me navigate life,” he said. With his family already on their way to California as of press time, he will focus on what matters.

“Grateful,” he said. “Truly grateful to live another day.”

And, if all else, the car crash story will now be a favorite among the barbecue pit.

For sure, he said, laughing. He and Alvarez will be sharing this story even when they’re old. No guarantees on if it’ll stay true to form though, he joked.

“Next year, ask me about the story … it’s gonna change slightly,” he said, ensuring that every good bbq tale needs some embellishment.