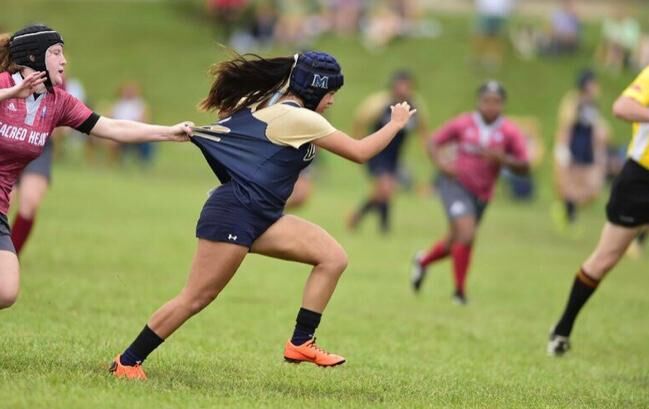 LOCKED IN: Lavona-Rae Torres Aromin, a graduate from Academy of Our Lady of Guam, suited up for Mount St. Mary's University's rugby team, a Division I school in Emmitsburg, Maryland. Contributed photo 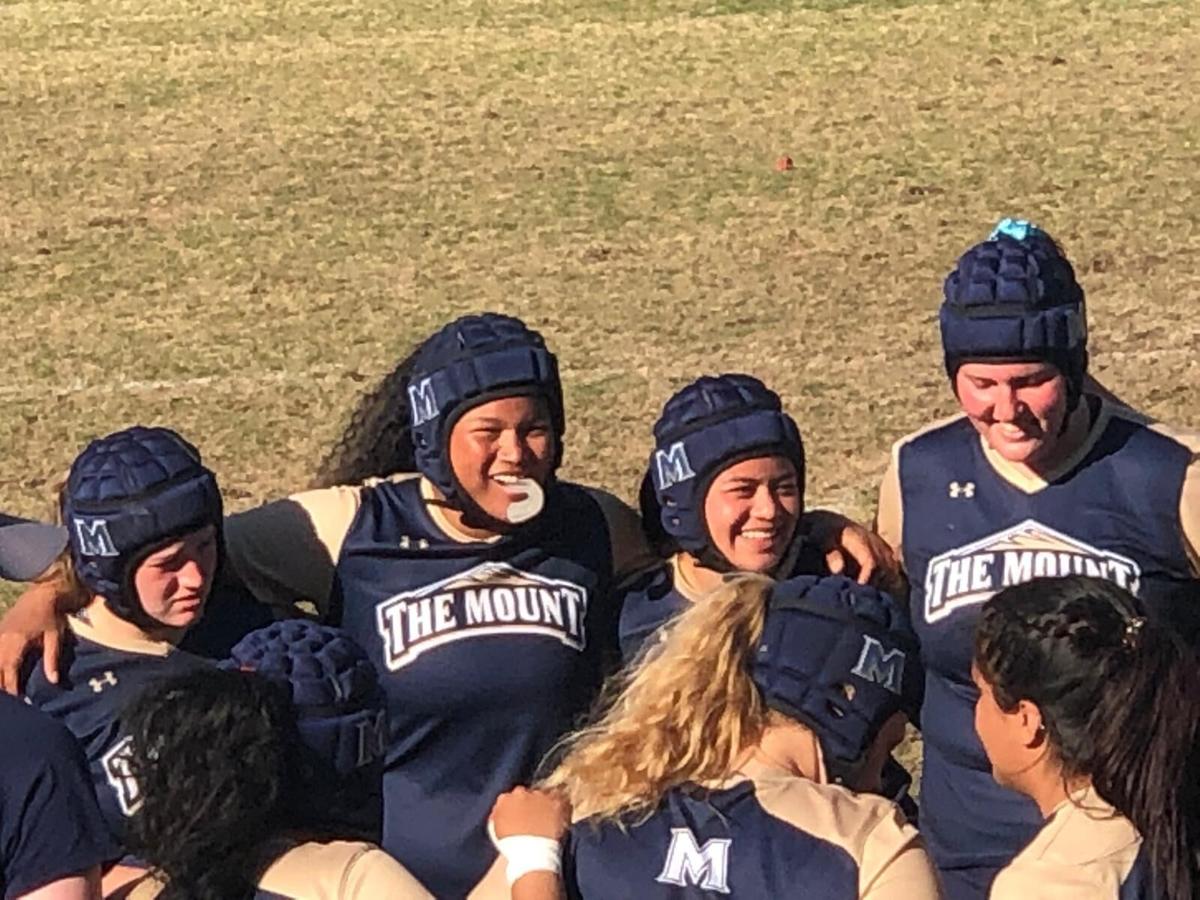 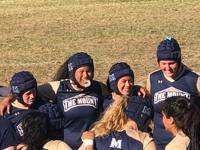 COUGAR ALUMNI: Hanna Rojas, center, and Lavona-Rae Torres Aromin, right, both graduates of the Academy of Our Lady of Guam, are currently playing Division I rugby for Mount St. Mary's University in Maryland. Contributed photo 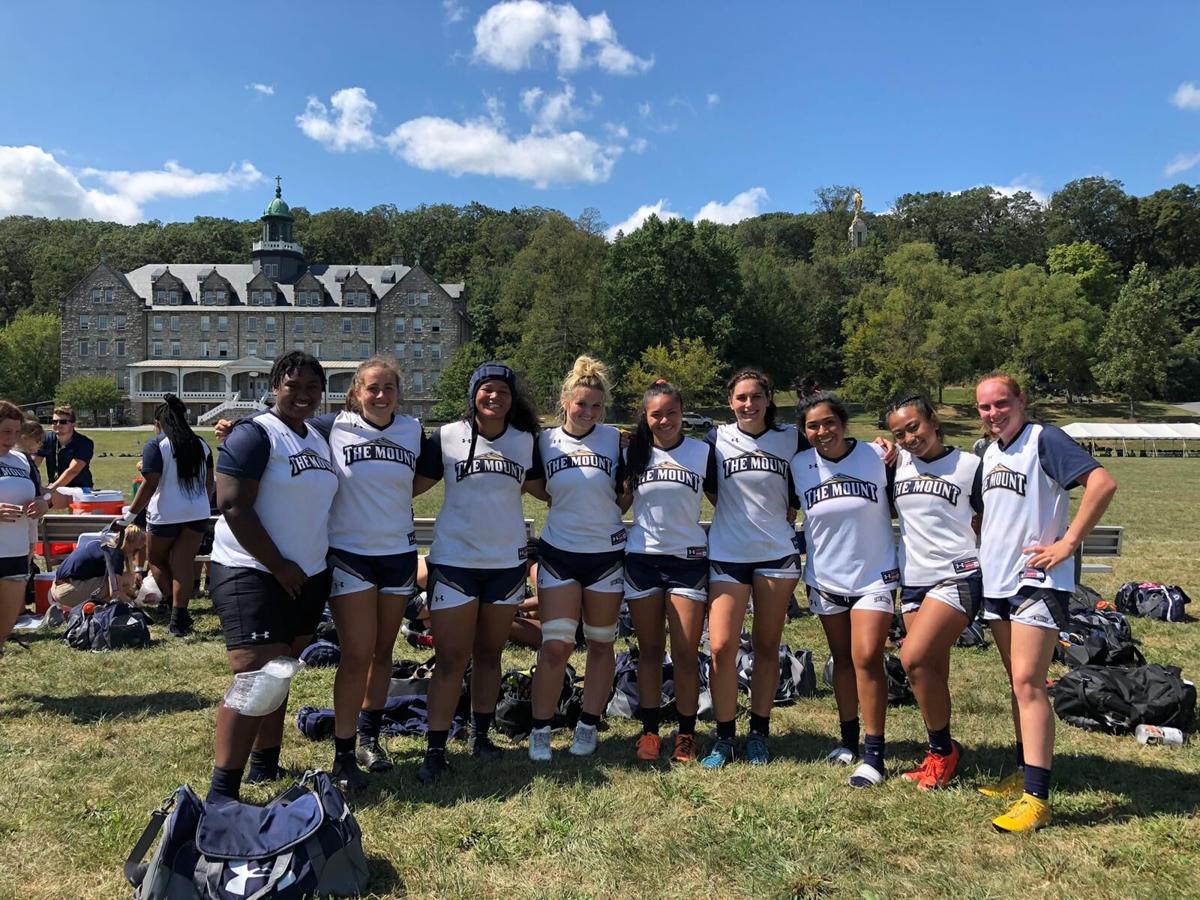 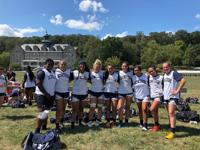 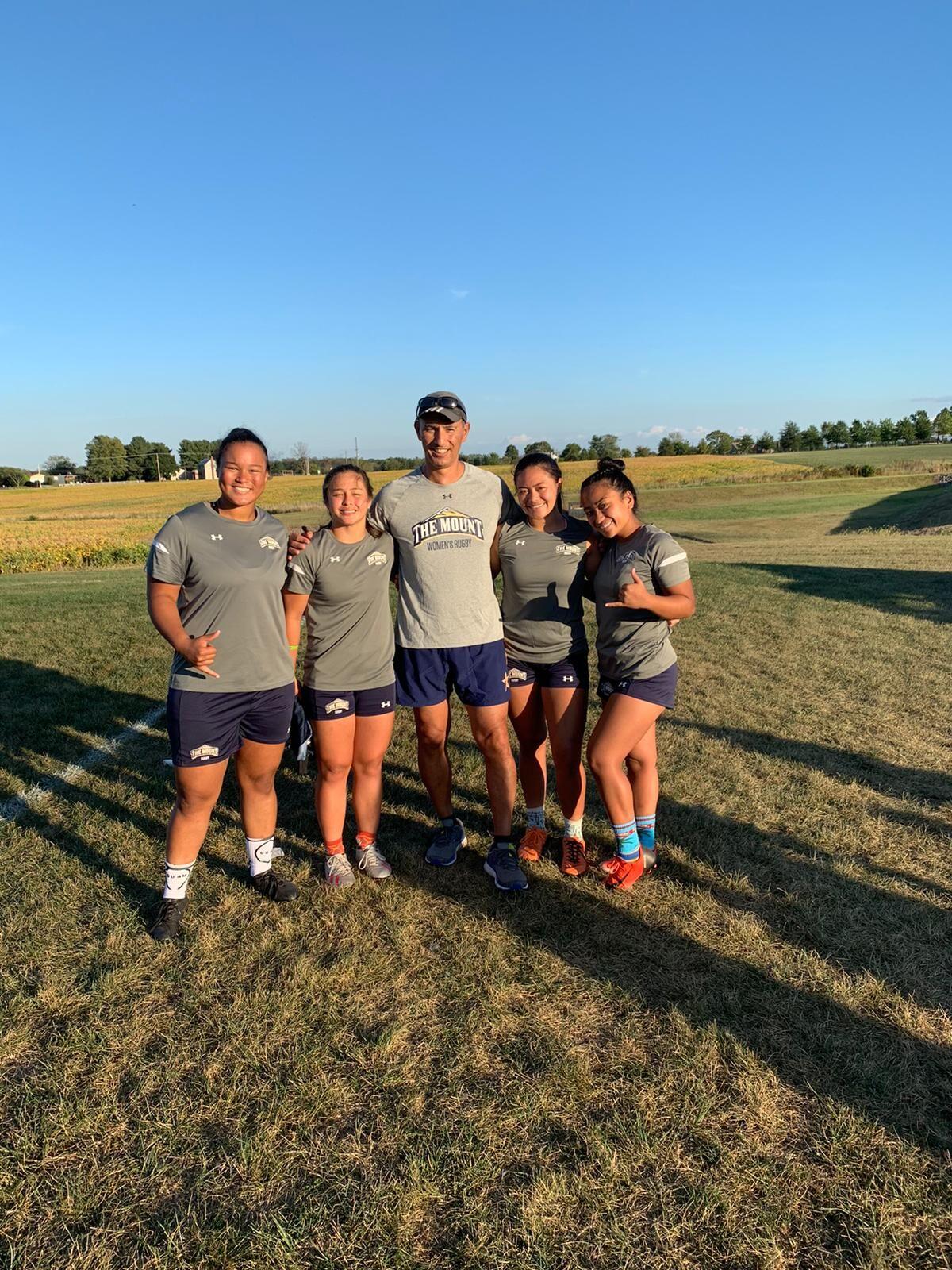 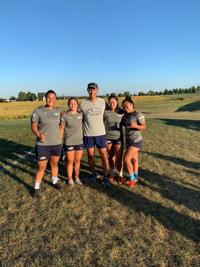 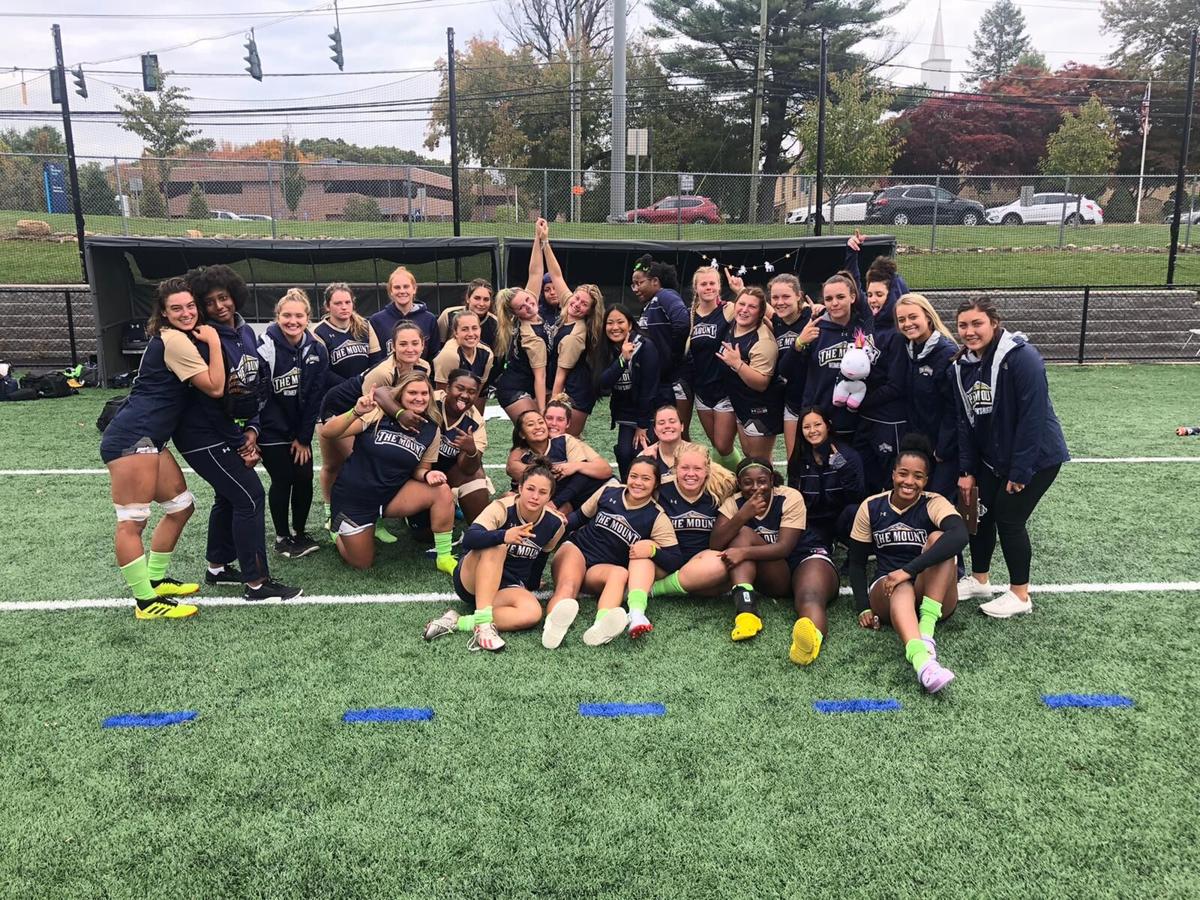 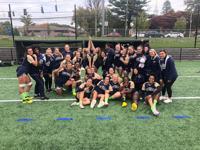 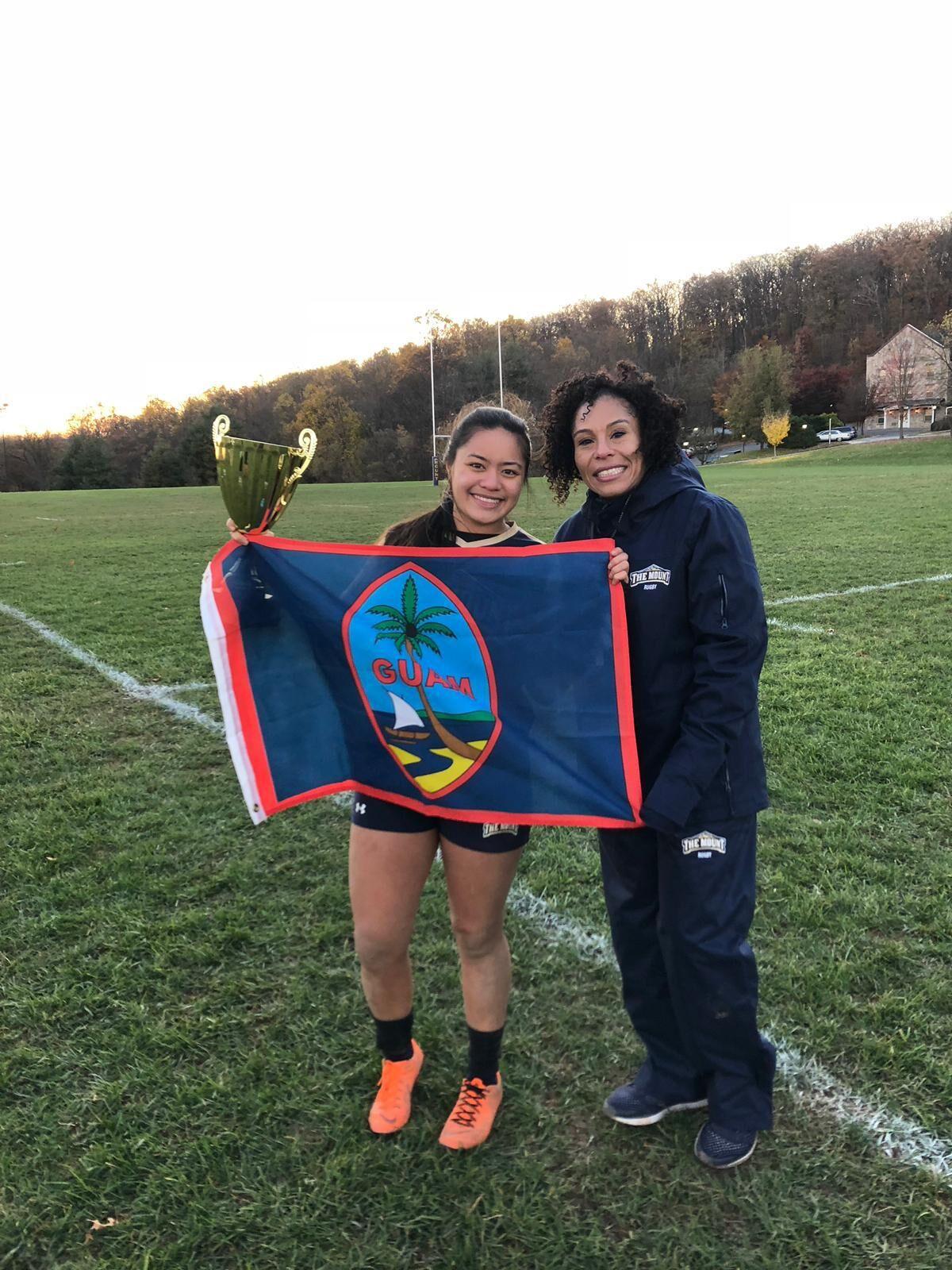 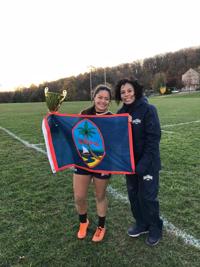 TAKING THE OPPORTUNITY: Lavona-Rae Torres Aromin, a graduate from Academy of Our Lady of Guam, is shown with her coach, Farrah Douglas, at Mount St. Mary's University. Aromin played rugby for The Mount, a Division I school in Emmitsburg, Maryland. Contributed photo

LOCKED IN: Lavona-Rae Torres Aromin, a graduate from Academy of Our Lady of Guam, suited up for Mount St. Mary's University's rugby team, a Division I school in Emmitsburg, Maryland. Contributed photo

COUGAR ALUMNI: Hanna Rojas, center, and Lavona-Rae Torres Aromin, right, both graduates of the Academy of Our Lady of Guam, are currently playing Division I rugby for Mount St. Mary's University in Maryland. Contributed photo

TAKING THE OPPORTUNITY: Lavona-Rae Torres Aromin, a graduate from Academy of Our Lady of Guam, is shown with her coach, Farrah Douglas, at Mount St. Mary's University. Aromin played rugby for The Mount, a Division I school in Emmitsburg, Maryland. Contributed photo

Editor’s Note: The article is part of a multi-part series on island athletes making the leap to collegiate sports. In Part 2 of Lavona-Rae Torres Aromin’s story, she shares her thoughts on how athletes can make that leap, the impact her coaches at Academy of Our Lady of Guam had on her growth as a student athlete and the love she has for her family – her supporters since ever since. Check out Tuesday’s issue of The Guam Daily Post.

If you had talked to Lavona-Rae Torres Aromin as a high-school student playing rugby at Academy of Our Lady of Guam two years ago, she had zero plans of playing collegiate sports.

Her go-to plan? Graduate high school, go to college and focus on a career. A collegiate athletic career was not even on her radar, said Aromin, who now plays Division I rugby with Mount St. Mary’s University in Emmitsburg, Maryland.

“I was never really interested,” she said, attributing the higher motivation to her fellow Cougar alumni Alejandra Ada (Dartmouth College) and Hanna Rojas (MSMU). “They were the ones who wanted to play Division I or go pro …I was just sitting in the back, like I’m just gonna chill, go to school, and, rugby? It’ll just be a hobby.”

Conversations with her family members – "especially my mom and my dad" – pushed her to take a leap of faith and make the tough decision to play rugby at The Mount.

Looking back, Aromin talks about the past two years and the progress she's made, adopting a growth mindset that has allowed her to shift her mentality and approach situations with a different perspective.

"I'm two years deep already, going on my third," she said. "I've met so many great people. I've learned so many things. I still have a lot to learn. I traveled a lot ... Man, it's just been an amazing experience."

Rugby definitely isn’t a hobby for the incoming junior. She’s fallen in love with the process of becoming a better student of the game, growing with her teammates and embracing the sisterhood that comes with a diverse team – all of whom come from different backgrounds and cultures.

“It really is a sisterhood. We go from being complete strangers to family instantly,” she said. “We are very comfortable with each other, which allows for everyone to be themselves.”

The bonding, she said, is borne out of the struggles they go through on the field or in competition. Their diversity, she added, allows them to appreciate where the other is coming from helping them become more better people.

“Having teammates from around the world is amazing!,” she said. “The diversity in our team is a great advantage because there is a constant flow of knowledge, skills, ideas and experiences. It’s all about being open-minded rather than quick to judge.”

As for the rigors of academia, “It’s honestly been a trip,” Aromin said. “Not going to lie, the classes I’ve taken so far for my major and minor were very challenging, but AOLG definitely prepared me for all of it. Although I’m a Health Science major with a minor in Human Services, The Mount has laid out other paths I could take, which I greatly appreciate.”

Her Human Services minor has expanded her world view, she said. Similar to a counseling program, the classes “teach me how to better myself so I can help others become better as well,” she said.

The past two years under her coaches – Farrah Douglas, Mere McAllister – and the MSMU staff have been about adjusting and adapting her game, she said.

“Rugby is really a mental game more than a physical one,” she said. “There would be practices where my brain would legitimately hurt because of all the information I was given, but it’s worth it. With repetition and consistency, everything came more naturally to me.”

Coach Douglas said it’s Aromin’s communication on the field and “solid understanding of the game” that have made her invaluable in the Mountaineer game scheme.

“She has great foot speed and this really uncanny ability to be in the right place to play off of her teammates and that allows us to play with a lot of continuity and speed,” Douglas said. “She has a very excellent ability to make open-field tackles.”

Aromin, along with three other Guam teammates – Jalana Garcia (George Washington), Mara Tamayo (Okkodo High School), Hanna Rojas (AOLG) – playing at MSMU, have made the transition to DI rugby, carrying starter roles in their first years with the team.

“The continuity side of things is really key because that’s where the Guam girls tend to shine a lot. They’re physical,” Douglas said. “For me, I love it when we go into a continuity game and moving the ball and playing what’s in front of them … and there’s that free flow. The Guam girls are really good at that open play. Lavona is one of those players that plays off of people and plays that continuity game really well.”

Aromin credits her coaches, their knowledge and patience with helping her make that transition from 7s to 15s.

“In high school I would choose defense over offense in a heartbeat, but now I grew to love offense more,” she said. “The rush of using my mental game to get into the heads of the opposing team just hits different.”

Taking on a bigger role has meant continually pushing and challenging herself mentally and physically, Aromin said, talking about the adjustments she made to her game.

“As a rising junior, there’s more pressure and responsibility you have within your team and yourself which is scary, but I always try to find a balance,” she said, discussing the maturation of her game. “Fieldwise, my coaches started placing me in different positions where a lot of decision-making takes place. I was hesitant at first because I’ve always struggled with using my voice on the field, but I’m happy to say that I made a ton of progress this year.”

Looking back on her last season, she said, the caliber of play from their opponents forced the team to grow as a collective and step up their game.

“There were many games where we should’ve won, but fell short. … Individually and collectively we are a work in progress, but our persistence is what keeps us on our toes,” she said. “Although we may not always see eye to eye, when we combine our talents our game play is truly unmatched.”

Individually, the mental game and the grind is something she embraces – her work ethic and brains allowing her to carve a niche for herself on a team full of talented athletes.

“Besides the heart and physicality that all Guam athletes bring to the mainland, I believe I bring adaptiveness to the team as well. It doesn’t matter what position my coaches place me in, where we travel, what teams we challenge, weather conditions, new players, etc.,” she said. “I learned how to be comfortable with what makes me uncomfortable.”

COVID-19 cut their season short, said Aromin, who returned home earlier this year. But, she’s looking forward to returning to MSMU and hitting the field later this month when she heads back to Maryland.

“I’m actually extremely excited to go back, even if our season is postponed,” she said, noting her season’s tentative start date is Oct. 1. “We are still going to train and have practice!”