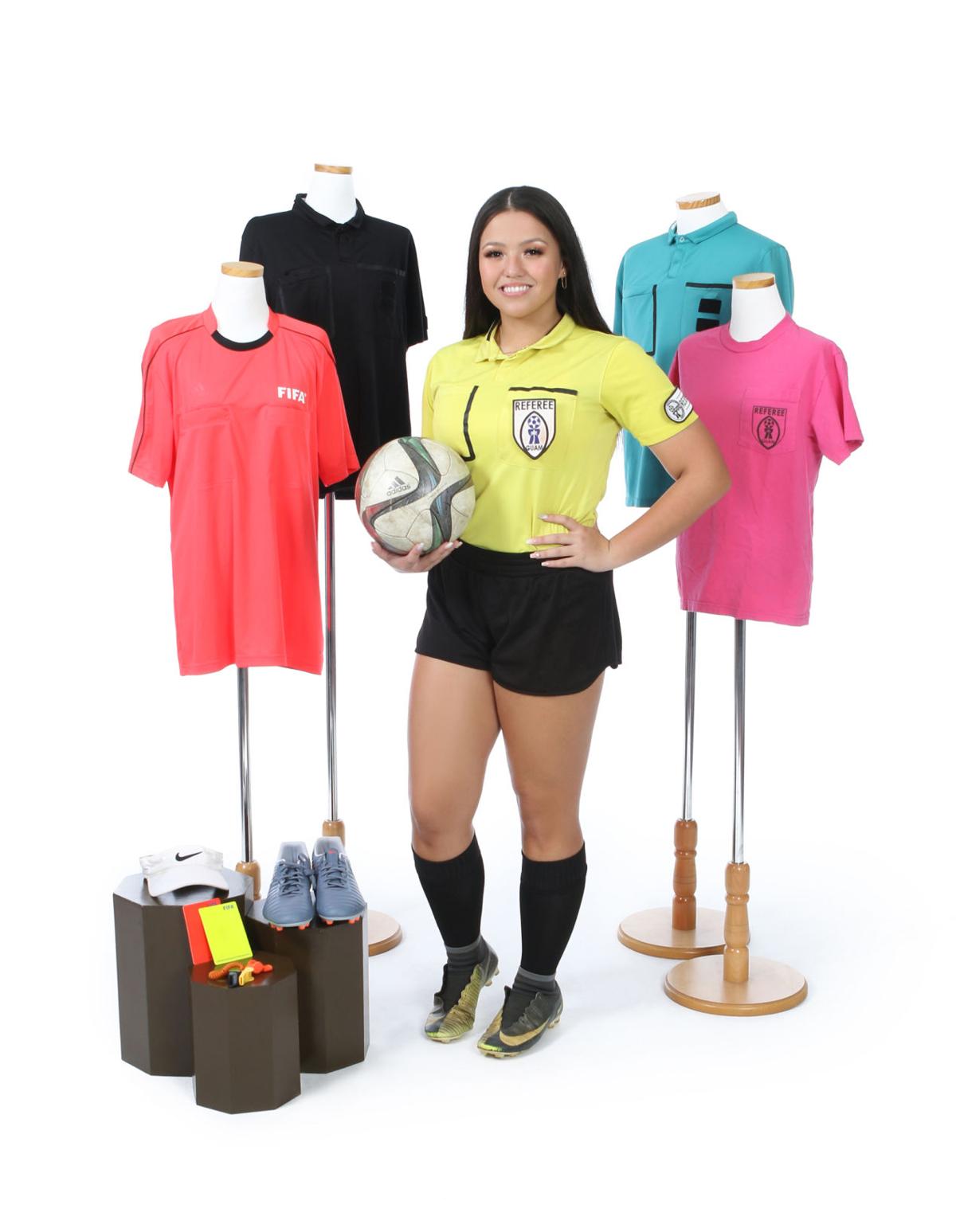 STAYING IN THE GAME: Southern High School valedictorian Autumn Yatar had her high school soccer career cut short due to injury and has become one of the island's most respected referees. In the fall, Yatar will be attending the University of Guam on a full merit scholarship. Photo courtesy of Autumn Yatar 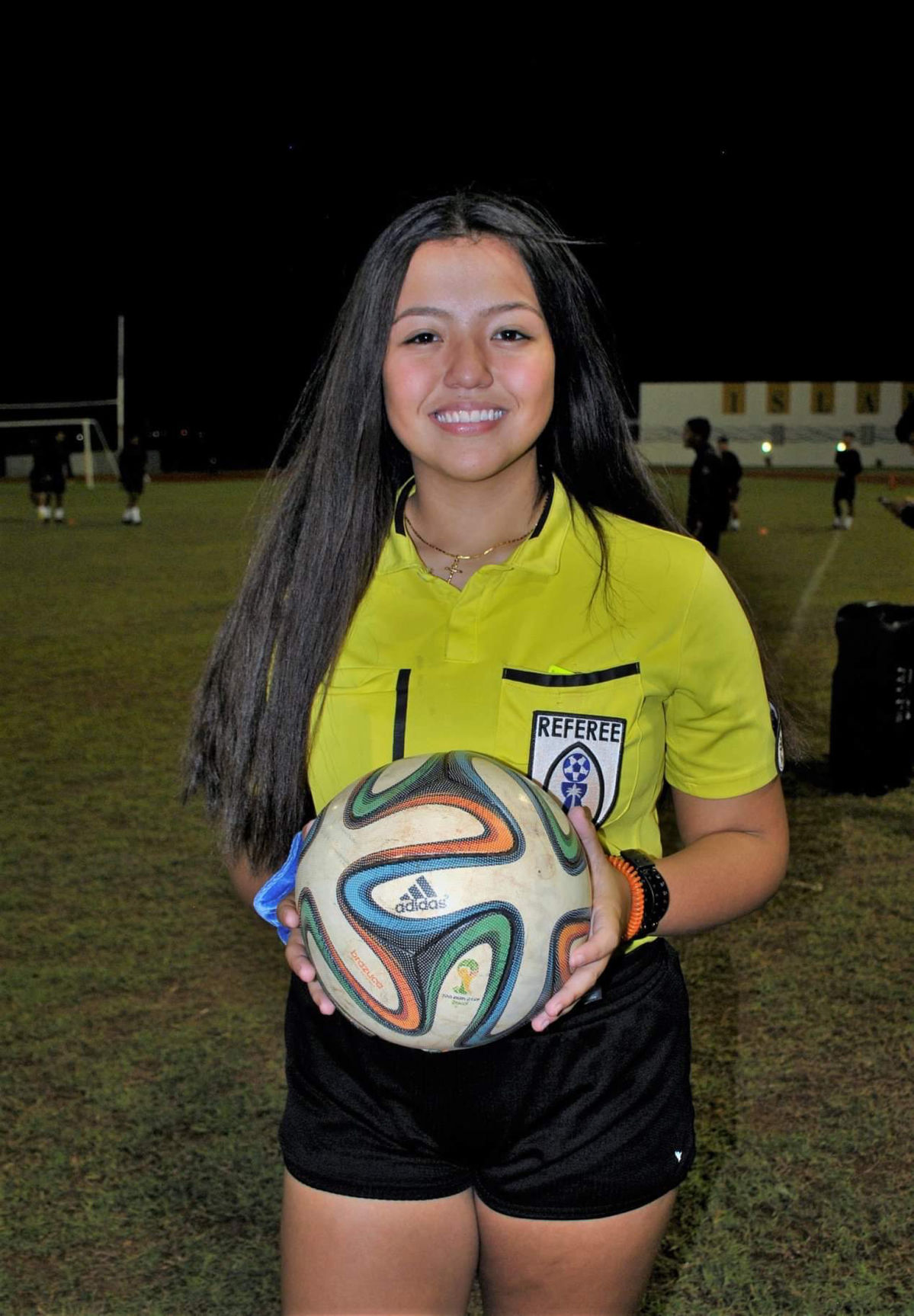 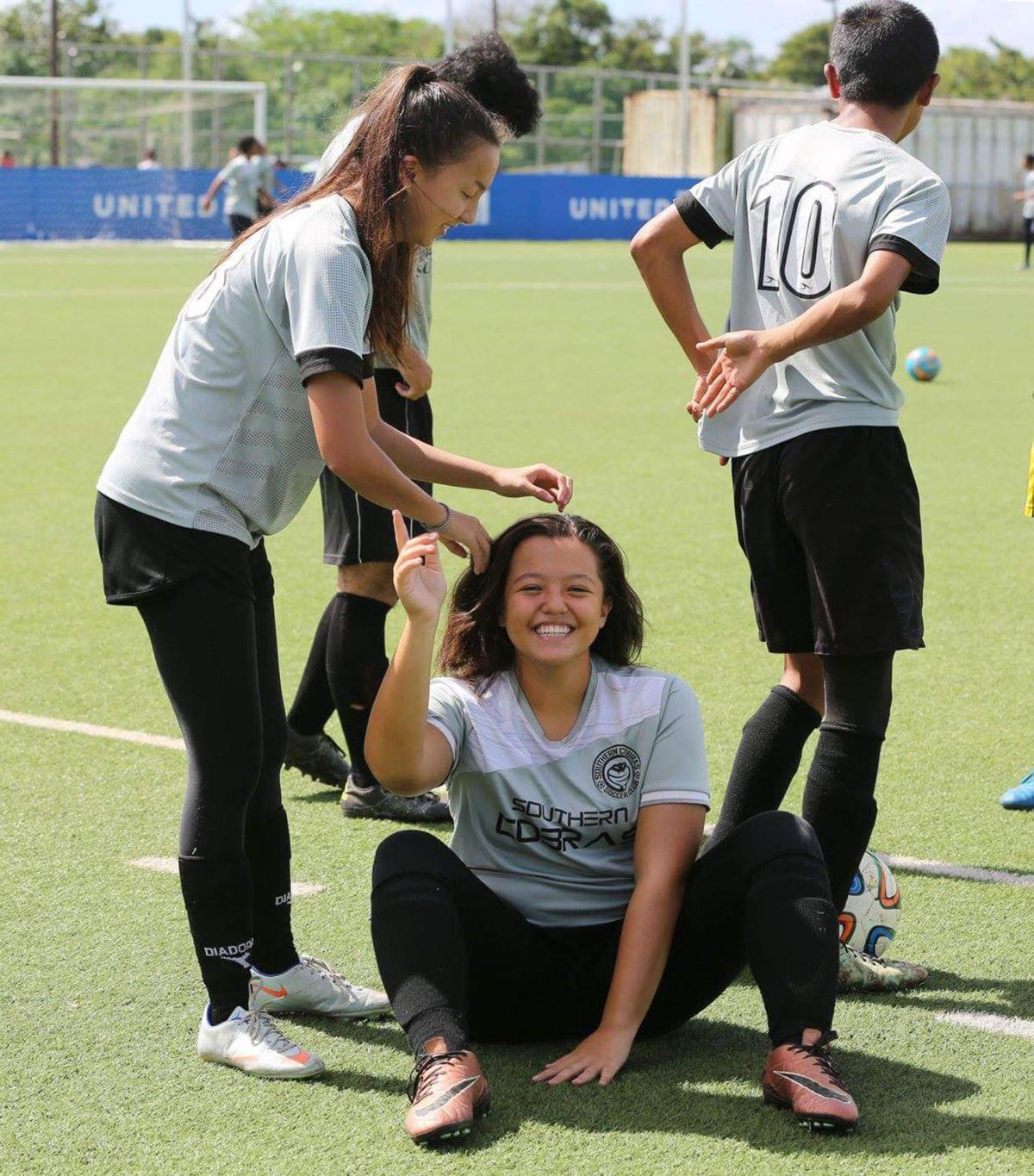 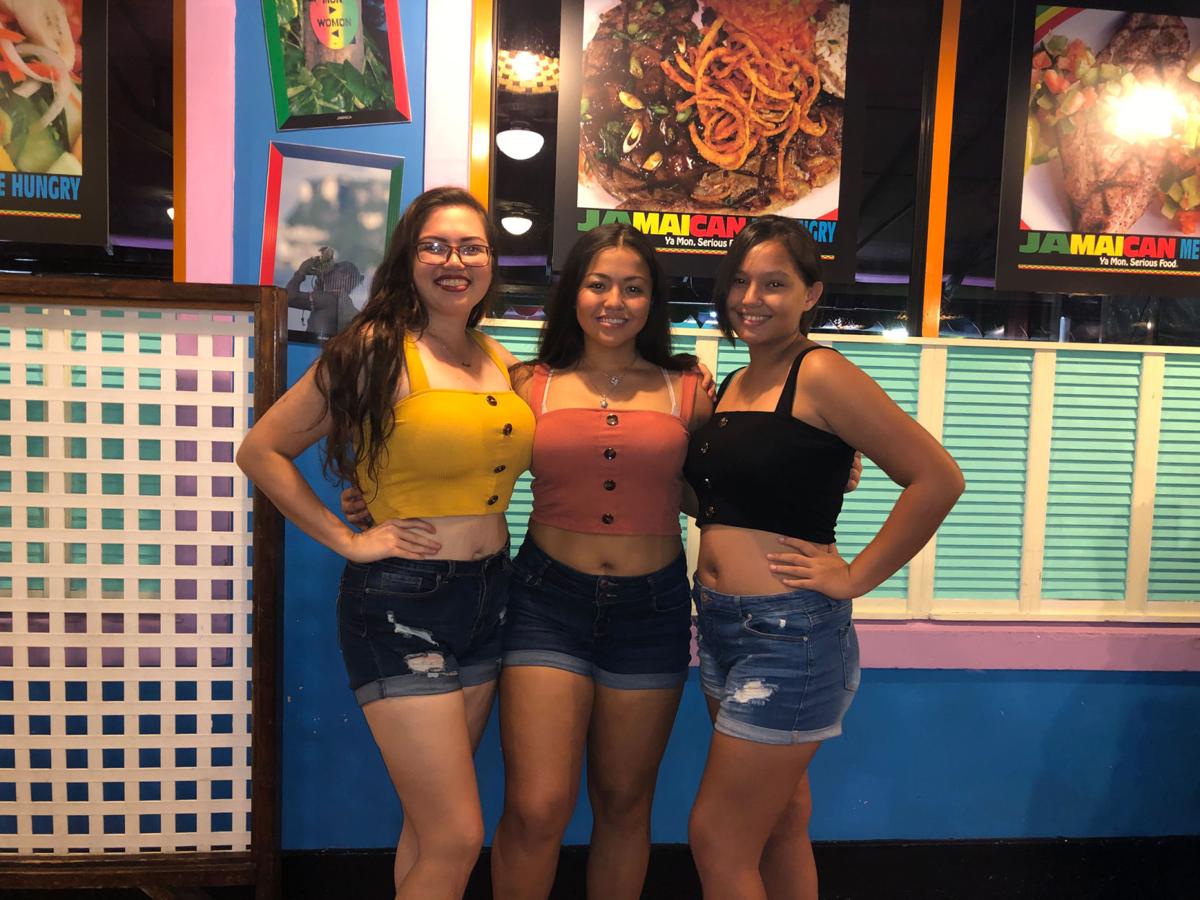 YA MON, SERIOUS STUDENT: In this file photo, from left, sisters Aubrey Yatar, Autumn Yatar, and Ayden Yatar pose at Jamaican Grill. Autumn Yatar is Southern High School's class of 2020 valedictorian and will be attending UOG in the fall on a full merit scholarship. Photo courtesy of Autumn Yatar 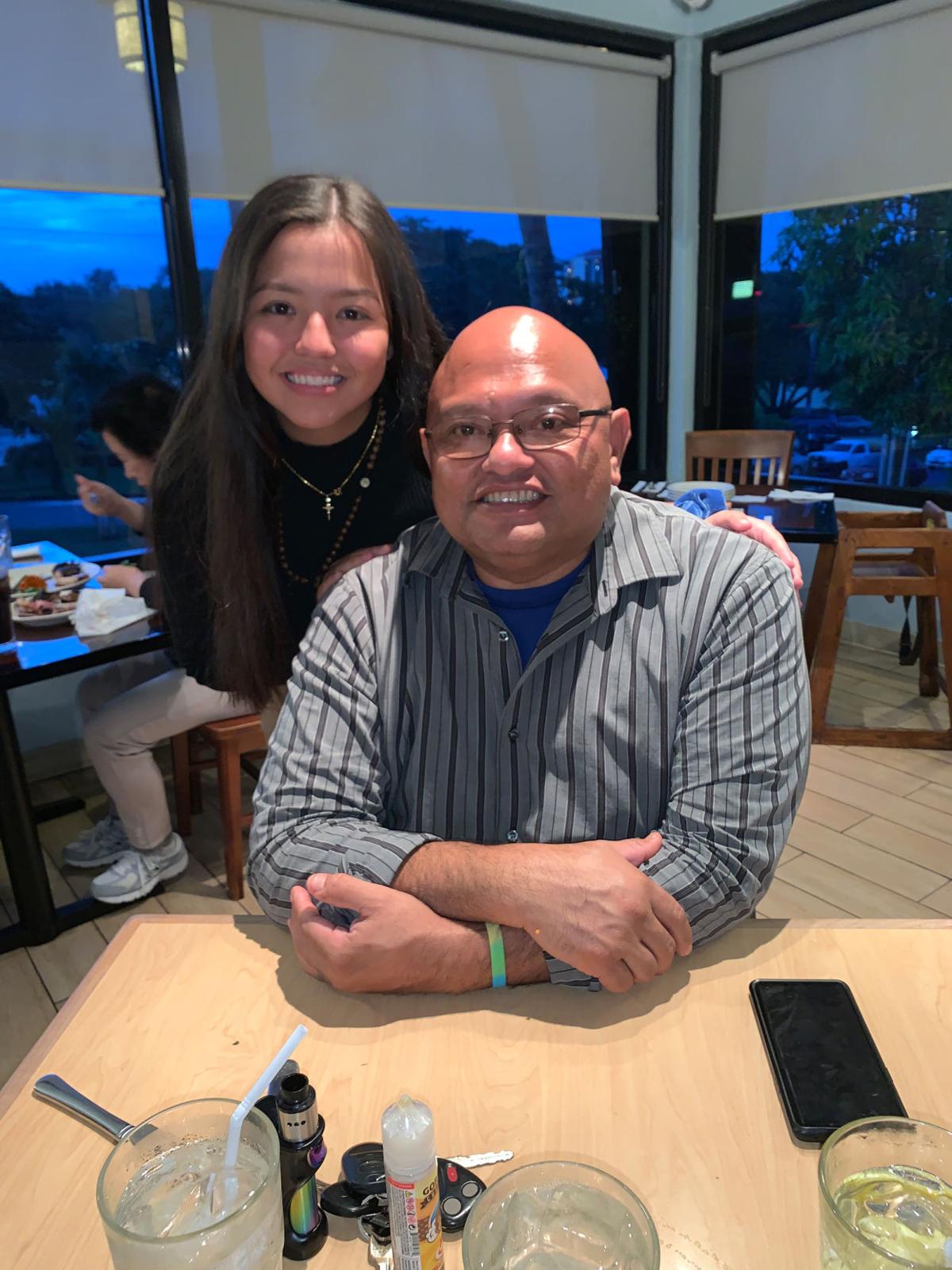 DADDY/DAUGHTER: In this file photo, Autumn Yatar and Anthony Yatar, father, are seen at a restaurant. Autumn Yatar is Southern High School's class of 2020 valedictorian. Photo courtesy of Autumn Yatar 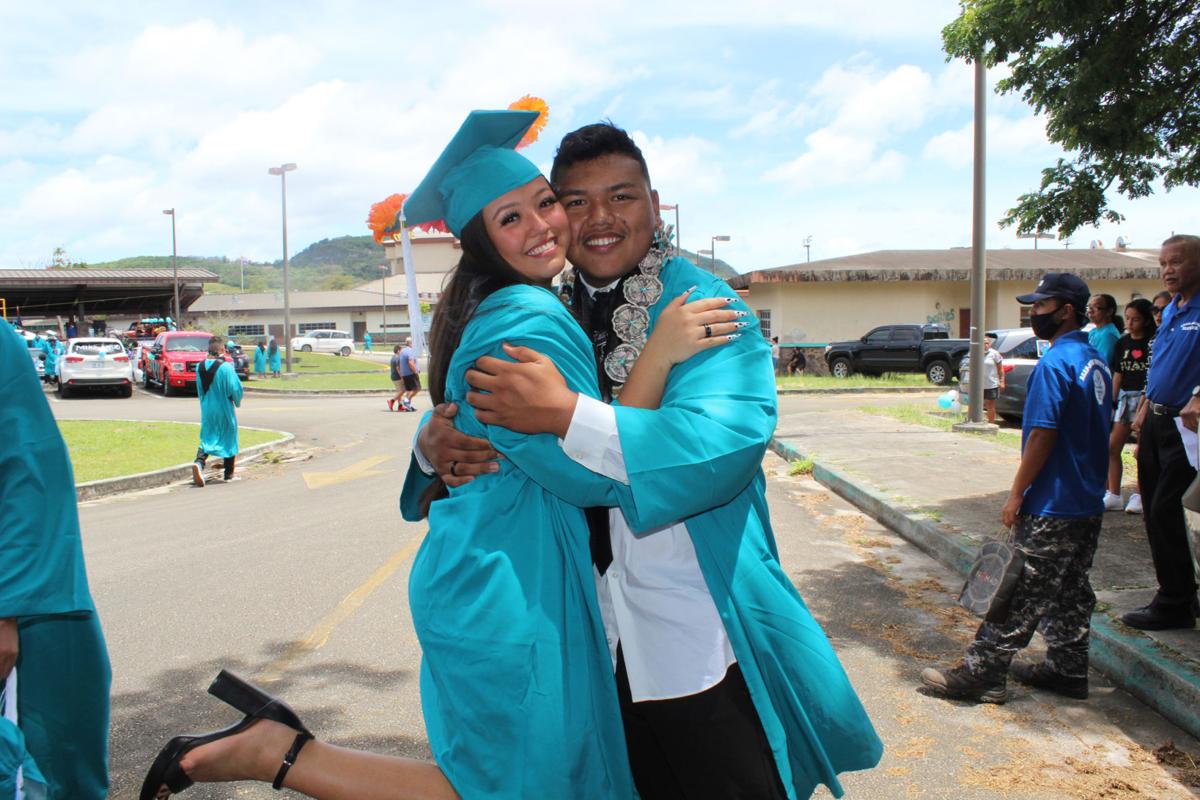 STAYING IN THE GAME: Southern High School valedictorian Autumn Yatar had her high school soccer career cut short due to injury and has become one of the island's most respected referees. In the fall, Yatar will be attending the University of Guam on a full merit scholarship. Photo courtesy of Autumn Yatar

YA MON, SERIOUS STUDENT: In this file photo, from left, sisters Aubrey Yatar, Autumn Yatar, and Ayden Yatar pose at Jamaican Grill. Autumn Yatar is Southern High School's class of 2020 valedictorian and will be attending UOG in the fall on a full merit scholarship. Photo courtesy of Autumn Yatar

DADDY/DAUGHTER: In this file photo, Autumn Yatar and Anthony Yatar, father, are seen at a restaurant. Autumn Yatar is Southern High School's class of 2020 valedictorian. Photo courtesy of Autumn Yatar

Editor's note: This is the first article in a two-part series chronicling Southern High School Dolphins' Autumn Yatar, an elite multisport student-athlete whose soccer career took an interesting, painful twist in her freshman year. This first piece chronicles injury and how she coped with not being able to play the sport that defined her. Part two, which will publish Friday, will cover her relationship with her grandmother and how the war survivor's life and death motivated her to become Southern's class of 2020 valedictorian. The second part will also focus on her academics, past and future, as well as illustrating her island pride.

On her way to becoming an elite student-athlete, Southern High School Dolphins’ Autumn Yatar’s soccer career was derailed in her freshman year.

In April 2016, while playing for the Southern Cobras, she and an opponent collided when chasing a header. As Yatar fell to the turf, her leg twisted awkwardly, and she winced in pain.

After a few months of rest and physical therapy, the left side of her groin not fully healed, she decided to give sports another try.

With the memory of the injury still burning brightly in her mind, a semi-healed Yatar charged out onto the rugby practice pitch and pulled the other side of her groin. As she collapsed in agony, she was helped to her feet and she hobbled to the sideline.

As she recovered, slowly, she participated in practices but was unable to play in the games.

After a disappointing rugby season, Yatar suited up for Dolphins soccer. While she made it through the entire season, she wasn’t the same athlete. With a high sports IQ, her mind was sharp, and her competitive drive had never faltered, but she was not able to play at a level she and her coaches demanded.

After finishing the ninth grade, Yatar’s body needed a rest. Whatever her coaches had asked of her, she provided, and she had nothing left to give.

Later that summer, in August 2017, Cecilia Yatar, Autumn Yatar’s 92-year-old grandmother, died, and that had a profound effect on the budding soccer star. When her grandmother died, coupled with her injury, she lost the fight to compete.

The following year, still suffering from emotional and physical pain, Autumn Yatar decided to suit up for the Southern Dolphins girls soccer team one more time.

“When I kicked a soccer ball, it felt like - oh my goodness - my entire leg was breaking,” Autumn Yatar said. “It was just terrible, … adding, “the injury was worse.”

It hurt too much to play, and due to the physical, mental and emotional distress of everything, the injury recurring, I decided to leave the team, she said.

Departing was one of the toughest decisions she had ever made, but it proved to be the right call.

“Leaving soccer at the height of my injury was the best decision I made,” she said. “During that time, I felt incapable, and my inability to play at my full potential or because I was hurt, had made me start to hate the sport that I had grown to love with all my heart.”

Unable to play the sport she had been a part of ever since she was 11 years old, Autumn Yatar felt incomplete, but soon found a way back onto the field as a full-time referee.

“In general, I really feel part of the game,” she said. “And, quite literally, I am.

“More so, it keeps that drive alive for me. It keeps that passion. It keeps me close to seeing and playing the sport that I love so much.”

In 2016, when Autumn Yatar was introduced to officiating, she had no way of knowing how much a part of her life it would later become. Being a referee, as much as a player, allowed her to see the game from a different perspective, and gave her a deeper understanding of the game.

"From a referee’s perspective, and with how much I love soccer, standing on the sideline, analyzing the game, watching it in depth has made me become a better student of the sport," she said.

“‘Was that a foul?’” she would often ask herself. “I really have to take apart what it is that they’re doing - the tactics.”

As a 14-year-old reffing her first game, Yatar's journey into officiating began with U10 competition. As she learned how to call games efficiently and correctly, she was given more responsibility and assigned to officiate higher-level play. By 2019, she was calling Guam Football Association Division 1 and 2 league games. Other than national league competition, she had reached the pinnacle of island soccer.

On weekends, Autumn Yatar can be seen at GFA covering up to five games in a single day, a daunting task even for those without nagging, recurring injuries. But, with injuries not fully healed, before each game day, she thoroughly stretches and is in very little discomfort.

“I know my limits and I know how to warm up so I won’t be affected.”

"It’s not something that stops me," she said.

During her seven years of soccer, Autumn Yatar has enjoyed seeing the way the sport unites the island.

“The island’s love for soccer is not unnoticed,” she said.

One look at GFA, on Saturdays, the community involvement is monumental, she said.

“It’s bringing the community together. It really is,” she added. “They all go for that one common love, which is the sport of soccer.”

Amid the coronavirus-inspired public health emergency, Autumn Yatar had lost her job waiting tables at a restaurant in Agat and has been unable to officiate due to the postponement and cancellation of league matches.

She said that, before the pandemic hit, she had been looking forward to calling the GFA Soccer Moms League.

“The season I was - actually - looking forward to reffing was coming up the week that quarantine had started, the moms' recreational league,” she said.

For some of the moms, it's a way to stay active. For others, it’s reigniting their joy for soccer, she said.

“Speaking to them, reffing them, seeing how they progress, is very inspirational to me. …

"It gives me hope that I can still come back and play," she said.

A short time ago, a coach from the Southern Heat's D1 team approached Autumn Yatar and asked her to join the team.

"Eventually, when I am more comfortable in going back, I most definitely will. … I would love to get back into it. … either D2 or just jump the gun and jump into D1.”

"It keeps me close to seeing and playing the sport that I love so much.”