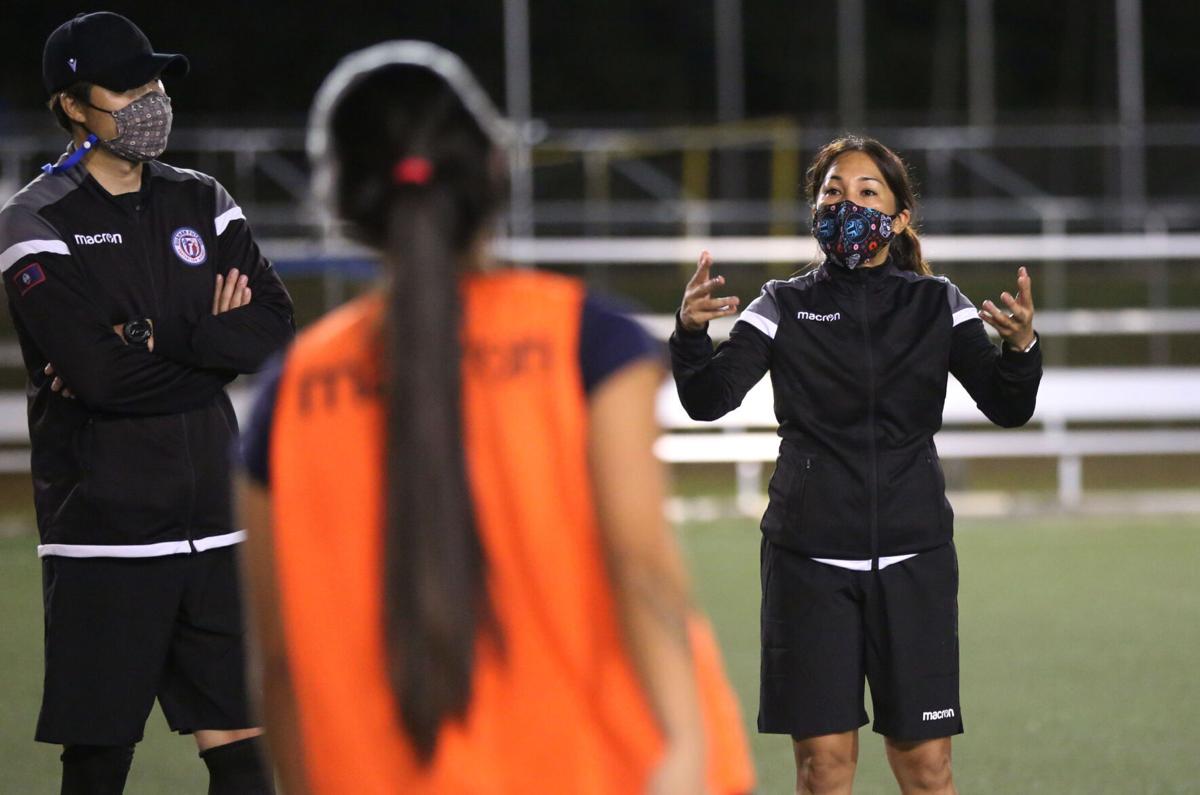 FOCUSED ON GROWTH OF THE TEAM: Newly appointed Masakåda assistant coach Rhoda Bamba, right, addresses players alongside head coach Sang Hoon Kim, left, at the conclusion of a recent training session at the Guam Football Association National Training Center. Bamba, a former Guam Women's National Team player, was called up to play for Guam from 2001 to 2010, including for the silver-medal-winning squad at the 2003 South Pacific Games in Suva, Fiji. Beginning this month, Bamba joined the team again, but now as its assistant coach under Kim. Photo courtesy of GFA 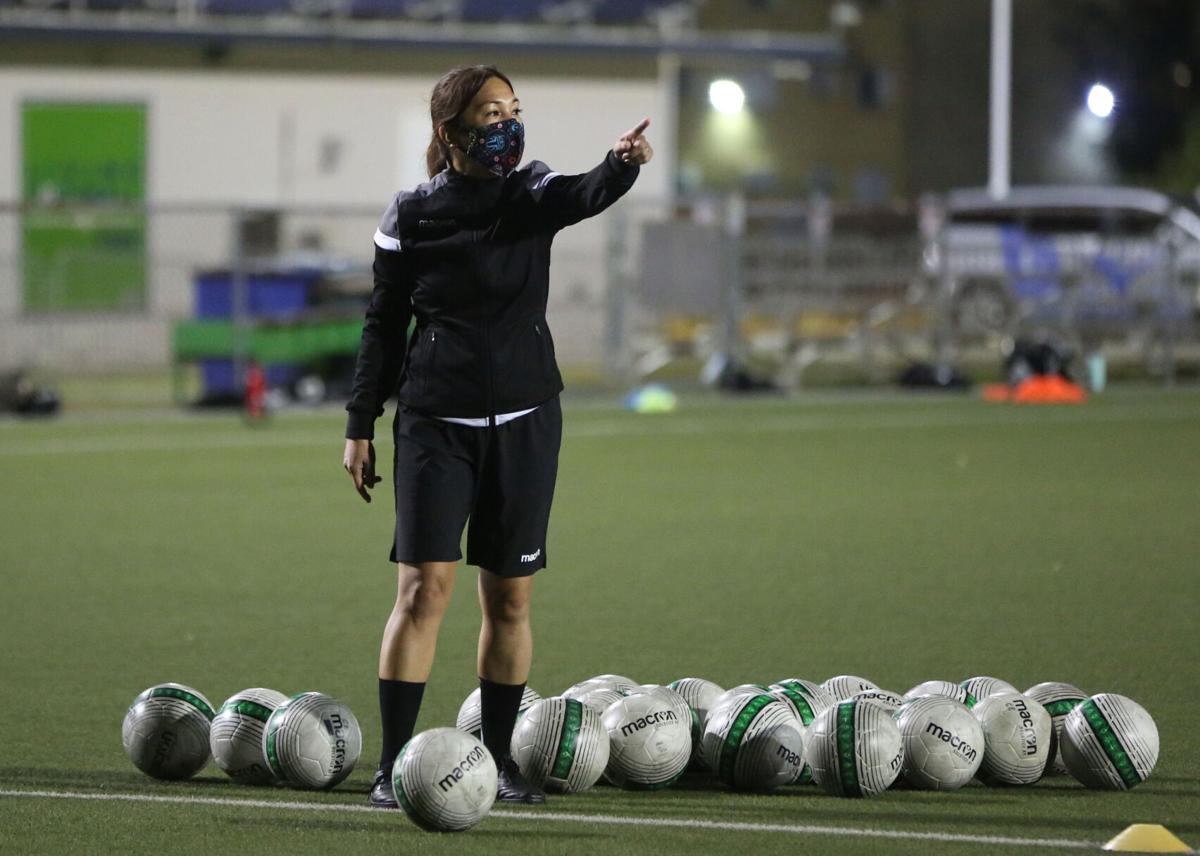 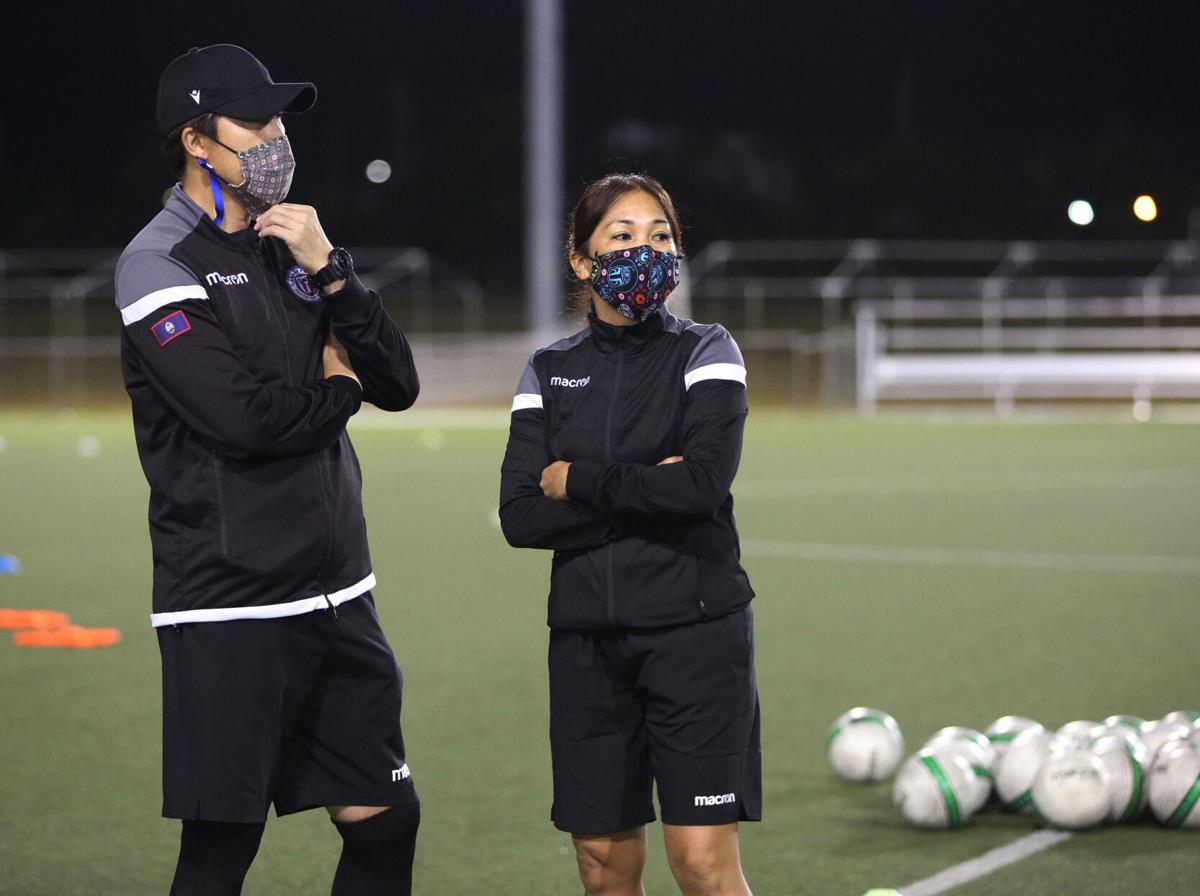 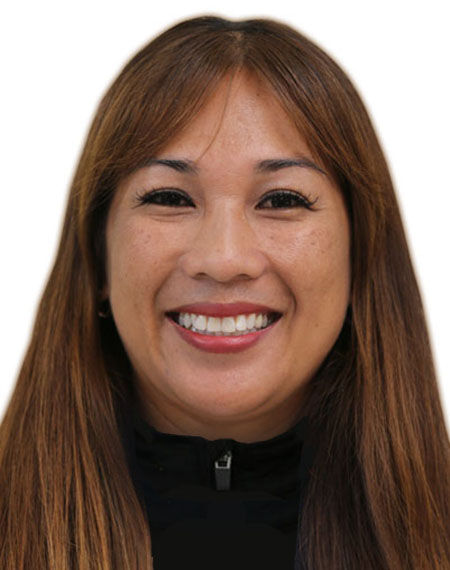 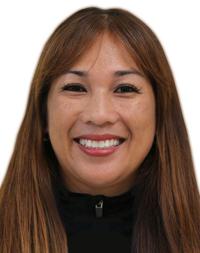 FOCUSED ON GROWTH OF THE TEAM: Newly appointed Masakåda assistant coach Rhoda Bamba, right, addresses players alongside head coach Sang Hoon Kim, left, at the conclusion of a recent training session at the Guam Football Association National Training Center. Bamba, a former Guam Women's National Team player, was called up to play for Guam from 2001 to 2010, including for the silver-medal-winning squad at the 2003 South Pacific Games in Suva, Fiji. Beginning this month, Bamba joined the team again, but now as its assistant coach under Kim. Photo courtesy of GFA

Fiercely competitive and passionate about the growth of her athletes, multisport athlete Rhoda Bamba, who has represented Guam on the international stage for several sports, will be adding a new accolade to an impressive resume: assistant coach for the Guam Masakåda, the Guam Women's National Team for soccer.

No stranger to the sports scene, Bamba – a 2020 inductee of the University of Guam Triton Athletics Hall of Fame – has been a key asset on several teams in her years representing Guam and playing in local leagues. And now Bamba will get the opportunity to bring her expertise to hone and help shape the island’s soccer program with head coach Sang Hoon Kim, the Guam Football Association Technical Department announced late last week.

Kim, who coached Bamba in 2006 as a member of the women’s national team, said he welcomes working with Bamba in a coaching capacity.

“I’m very happy to have Rhoda join the Masakåda coaching staff,” said Kim, who also is GFA’s Technical Director. “With her experience playing at the highest level for Guam, she knows what is required of players to succeed and the feeling of representing the island in international competition.”

Kim commended Bamba’s commitment to the game and her belief in the program toward raising the overall level of women’s soccer on island.

“She understands Guam’s playing philosophy and style and, as a teacher by profession, I believe she will work well with the players,” he said.

Bamba, a teacher at Guam High School, said she is looking forward to assisting and supporting the program’s directives, “so that the Masakåda can compete in upcoming AFC and EAFF tournaments and improve Guam’s world ranking.”

On the calendar for the Masakåda in 2021 are at least two international tournaments: the Asian Football Confederation Women’s Asian Cup Qualifiers and the East Asian Football Federation E-1 Football Championship Women’s Competition Preliminary Round 1. Currently, Guam is unranked in the FIFA/Coca-Cola Women’s World Ranking due to inactivity over 18 months.

Bamba emphasized her trust in Kim’s vision for the program, adding she hopes to “help develop the technical ability and performance for all women eligible to represent Guam … (and) create a healthy environment and culture for women, regardless of age, who are eager to simply de-stress after a long day of work or school, improve their knowledge of the game and who have the desire and passion to play for Guam at the highest level.”

Bamba said she is looking forward to learning under Kim and helping to shape the future of women’s soccer.

“I feel lucky to assist the Masakåda under his direction,” she said. “He was one of my coaches before and I saw how he was able to maximize individual and team performance in such a short time. I know that I will gain even more knowledge working directly under him, so that I can continue to give back to all teams that I coach in Guam.”

Bamba was first called up to represent Guam in international competition in 2001 for the AFC Asian Women’s Championship in Chinese Taipei. Two years later, she was called up for the silver-medal-winning squad at the 2003 South Pacific Games in Fiji. Guam earned its highest world ranking the same year at No. 66 in the world. Bamba later played in five more tournaments for Guam, with her final match at the 2010 Marianas Cup against the Northern Mariana Islands.

Bamba’s first foray into coaching was in 1997 as the assistant coach of the Southern High School girls soccer team. At the club level, she began in 2003 with the Southern Cobras as a U6 head coach. Currently, Bamba also is the Guam High School girls soccer coach, as well as a coach with the ASC Trust Islanders in the Triple J Auto Group Robbie Webber Youth Soccer League.

Bamba credits GFA with her growth as a player, referee and board member, adding it was an honor to be selected as an assistant coach for the program.

“I look forward to doing what I can to contribute to the success of all on the Guam Women’s National Team – on and off the field,” Bamba added.

Aside from her experience as a National Team player and a coach at various levels, Bamba also is a Guam national referee, as well as a former GFA Executive Committee member and chairperson of the GFA Women’s Committee.

The Navy can do the right thing – reimburse GovGuam's cost of dump cleanup, landfill development

Next month, the Supreme Court of the United States will hear oral arguments in a Guam case. Read more

The streaming of tears

A series of events occurred this week that had me thinking about how people deal, especially now, with death. Of course, had not these events … Read more

Slingshots and slingstones were the weapons of choice for the CHamorus

Editor's note: This is the second of three excerpts of an article about Magellan's stop on Guam 500 years ago. Read more