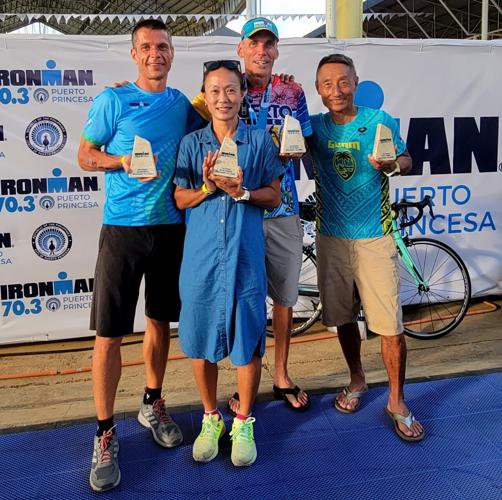 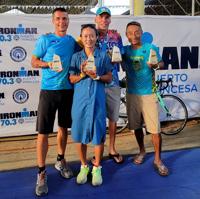 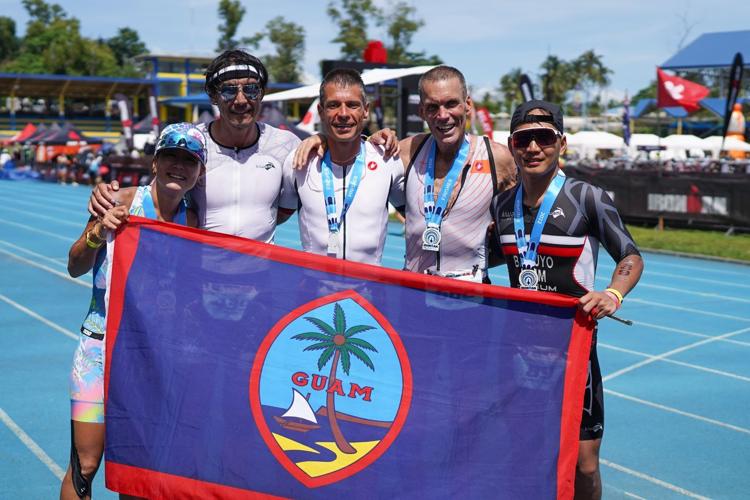 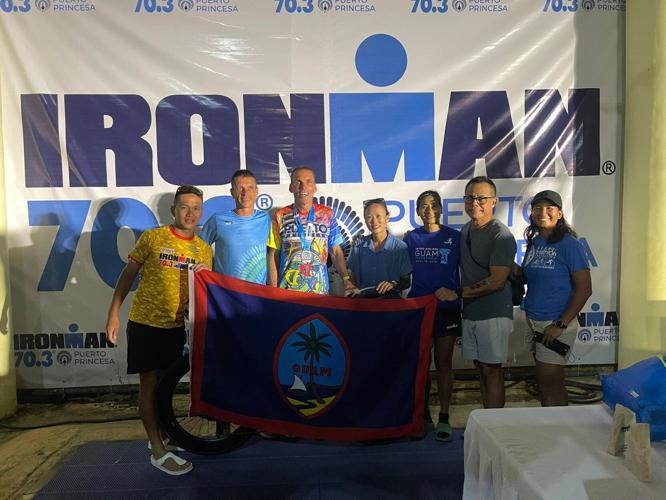 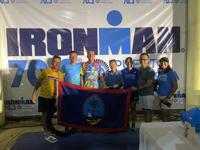 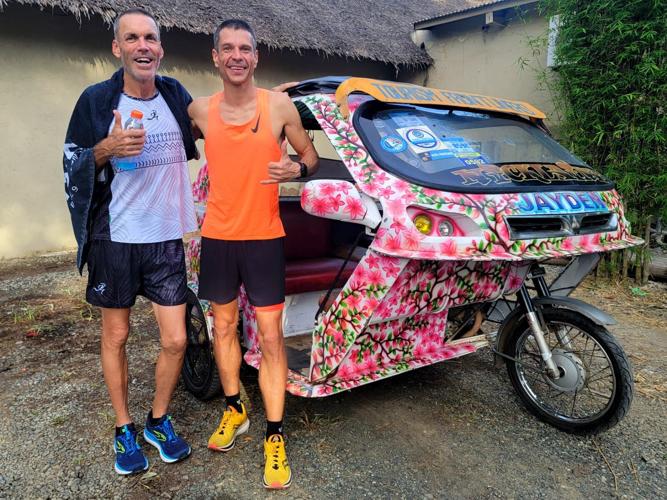 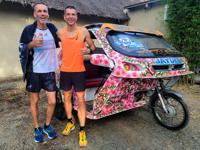 TUK TUK GUAM: Craig Weymouth, left, and Tom Schils appear next to a tuk tuk in the Philippines. Both Weymouth and Schils earned a podium spot at the Ironman 70.3 Puerto Princesa Nov. 13, 2022, in Palawan, Philippines. Photo courtesy of Tom Schils 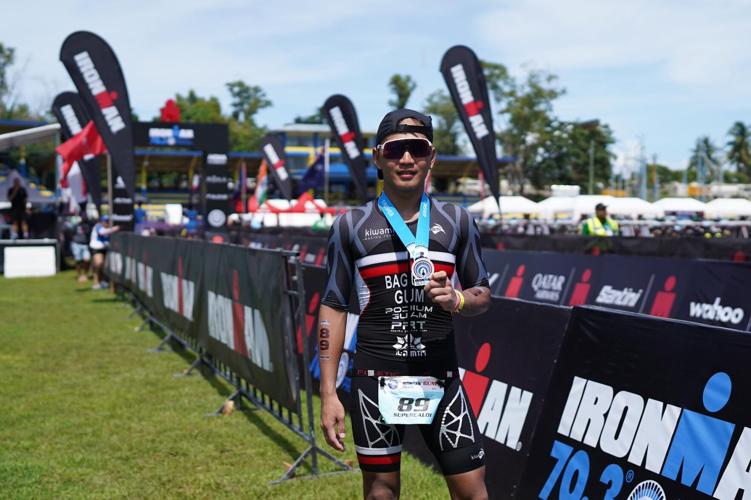 TUK TUK GUAM: Craig Weymouth, left, and Tom Schils appear next to a tuk tuk in the Philippines. Both Weymouth and Schils earned a podium spot at the Ironman 70.3 Puerto Princesa Nov. 13, 2022, in Palawan, Philippines. Photo courtesy of Tom Schils

The sun blazed and muscles cramped but that didn’t stop four Guamanians from making the podium and five other islanders from completing Ironman 70.3 Puerto Princesa Sunday afternoon in Palawan, Philippines.

Leading the Guam contingent, former professional triathlete Mieko Carey and Kilhak “Killy” Kunimoto earned first-place finishes. Carey, in 5 hours, 19 minutes, 54 seconds, in the Female 40-44 division, was the fastest to finish by nearly 51 minutes. Kunimoto, who competed in the Male 70-74 age group, in 8:02:44, was nearly six minutes quicker than the second-place finisher. Earning a second-place finish, Guam Triathlon Federation President Craig Weymouth missed the top spot on the podium in the Male 55-59 age division by about 10 minutes. Impressively, Weymouth finished the race in 5:40:32. Tom Schils, competing in his first-ever Ironman, raced in the Male 45-49 division and, in 4:59:38, delivered a bronze-medal performance.

The five others from Guam who completed the race are Caloi Baguyo, Mylene Garcia, Allen Kim, Patrick Santos and James Sardea.

For Carey, a 44-year-old mother of two twins, Puerto Princesa marked her return to international completion in over seven years. At the insistence of Weymouth and support from her husband and her best friend, she ramped up her training and set her goals on making the podium and finishing in under six hours.

“I made both!” said Carey, sharing that she couldn’t have done it without her support crew.

Before the race, she wondered how moms found the time to train and compete.

“I figured out their husbands are their No. 1 supporters,” she said. “I couldn't do this without my husband's support. He takes care of the kids when I am training, especially on weekends. Also, my best friend, Yoshie Cramer, watched the kids."

With support crew in check, it was now up to Carey.

A little more than halfway into the run, Carey experienced medical issues.

“It was super hot and I started cramping in both of my quads at mile 7," she said. “I tried everything I could do. … When I saw the last two miles, I started thinking about my twins. They've run a 2K. ‘If they can, I can,’” she thought to herself.

Ageless Kunimoto turns back the hands of time

To finish a 70.3-mile Ironman, let alone winning one, so many factors come into play. Training, nutrition and having the right equipment and trusting that it will not fail are all keys to success. If any part of the formula is out of whack, the probability of success goes down. Heading into Puerto Princesa, the 73-year-old Kunimoto knew what he had to do and went to great lengths to make sure he and his equipment were in tiptop shape. After a second-place finish in Ironman 70.3 Philippines in Cebu, Kunimoto wanted first place — he wanted it bad.

“I just wanted to bring back first place to Guam,” he said. “So many senior friends are waiting to hear my results to give them motivation to go out on the street for their exercise.”

When Kunimoto landed in the Philippines and retrieved his bike from baggage claim, he quickly learned that something was wrong. The electronic shifting mechanism had been removed, probably confiscated by TSA because of its lithium batteries, said Kunimoto.

With Kunimoto’s bike stuck in high gear, he kicked into high gear, frantically searching for a replacement shifter or another bike.

“My friends are all bike shop people. I tried to find one for me, but no success,” he said. “One of my friends offered her bike to use for the race. That was very kind of her, but I decided to go with my bike with one gear shift setting.”

For Kunimoto, it was boon or bust.

“If I die, I rather die on my bike. It's high gear setting and had a memorable time at each uphill, one major hill which I had to go up six times,” he said. "On the last one, I almost gave up, but people along the road were yelling and cheering for me. ‘Go! Go! Go!’”

After a brief, 5 minute, 40 second rest in transition, Kunimoto hydrated and returned for the run.

“The heat on the road was brutal, no shaded area,” Kunimoto recalled. “The last defeat by two minutes kept me going. It's so funny, but it's true, I just didn't want to lose by two minutes again, no more second places.”

Weymouth, like the other podium-grabbers before him, willed himself through the run.

“The heat on the run was a killer,” he said. “We just tried to get from aid station to aid station - 55-gallon drums of cold ice water!”

He said that he battled leg cramps for the entire run and it was “just all about survival towards the end.”

“I had hoped to catch him on the run, just had nothing left,” Weymouth said.

Weymouth added that he is pleased making the podium as it qualifies him and the others for the 2023 Ironman 70.3 World Championships in Lahti, Finland.

“We came to get an entry to the world championships in Finland later in 2023,” Weymouth said. “So, mission accomplished! Leaving with what we came to Puerto Princesa for.”

Like Kunimoto, Schils had an equipment issue with his bike. After finishing the swim in 34:15, his spirit was inflated. When he hopped on his bike, however, his tire was flat.

“Before the start, my tire deflated completely,” Schils said. “Since it's tubeless, the tire needs an air boost to get properly seated. There was no compressor on site but the mechanics were able to inflate it. Nevertheless, the possibility of getting a flat on the ride was playing mind games with me and I kept checking the tire during the ride.”

Schils’ tire never lost pressure and he finished the ride in 2:29:48, about 40 seconds behind second place.

With 57.2 miles conquered, Schils started the run, which he described as “the hardest part,” with “blistering hot conditions.”

As Schils approached the finish line, he was less than a minute behind second place. Without enough gas left in the tank to fight for silver, he enjoyed the moment, highlighted by the uplifting atmosphere.

“The local crowd was amazing, cheering everybody on, playing confidence-boosting music,” Schils said. “I told myself that I could slow down, but walking was not an option.”

Schils told The Guam Daily Post that he is a triathlon “newbie,” joining his first Guam Triathlon Federation race in 2021, a little more than one year ago.

“I impulsively signed up for the Guam Triathlon in 2021 during the pandemic, but didn't have a bike,” Schils said. “Then I started cycling in the fall with the folks I met at the triathlon. In the spring, I started swimming with the group and then signed up for a larger distance. Proper training started in August, with a two-week break for a work trip.”

He said that his goal was to finish the race with a “somewhat decent time.”

“I'm really grateful for the incredibly supportive community of the Guam Triathlon Federation. It's a fun bunch with many experienced athletes who are keen to share their knowledge and stoke with anyone interested in the sport,” he said.