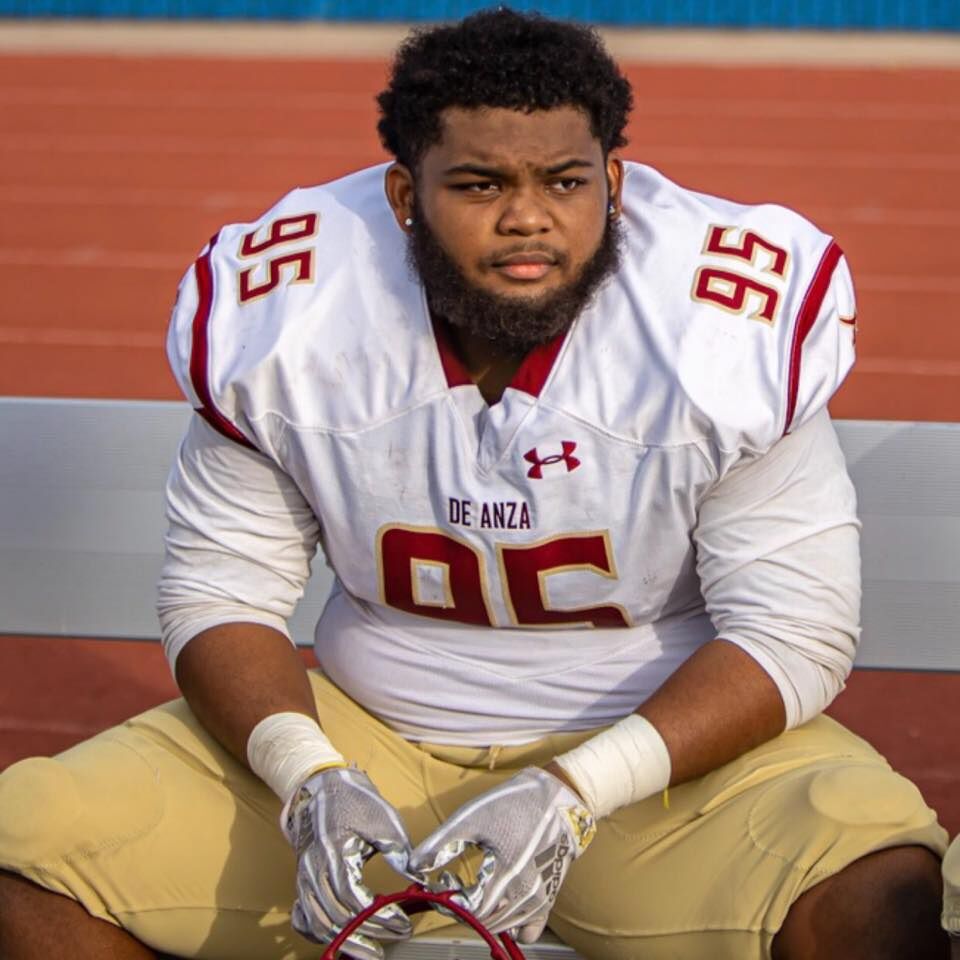 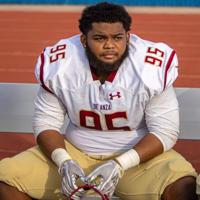 LOOKING AHEAD: In this file photo, Chris Parker Jr. rests on the bench before his number is called to enter a football game for the De Anza Community College Mountain Lions. Parker will graduate from De Anza on Friday and transfer to San Jose State University in August. Photo garnered with permission from Parker's Facebook page 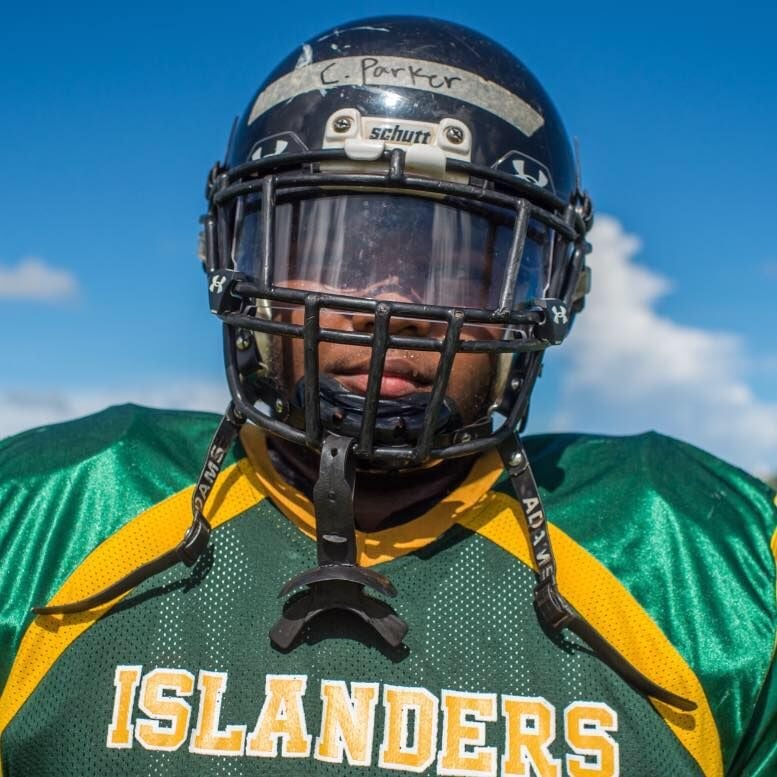 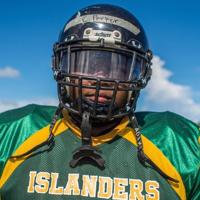 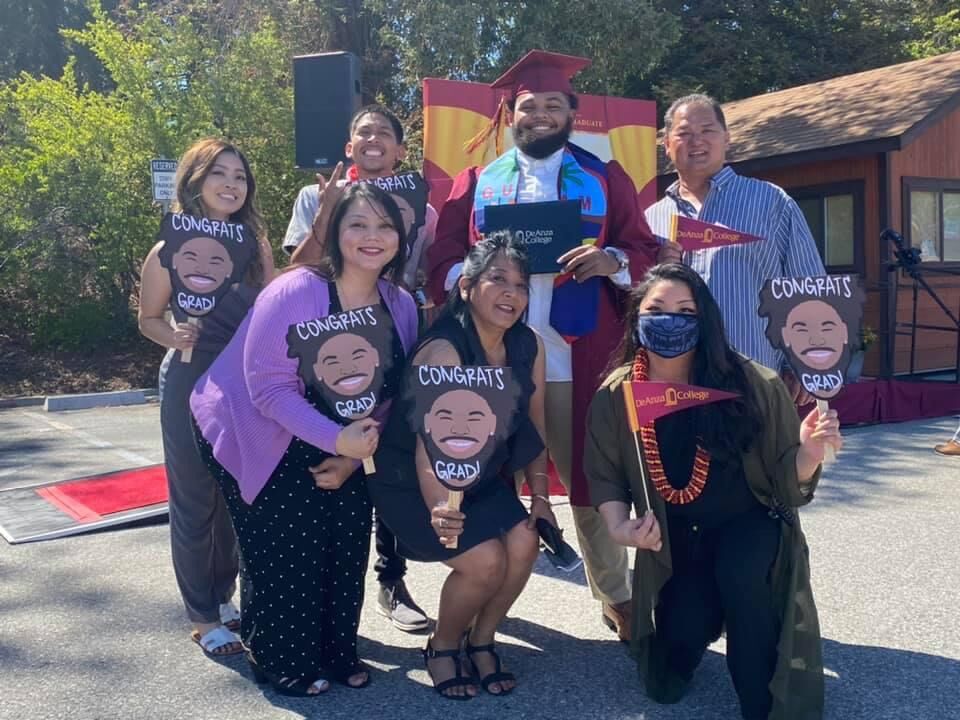 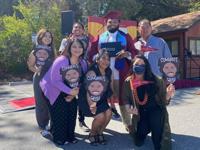 CONGRATULATIONS: Chris Parker Jr., center, holds his diploma while surrounded by family and loved ones. Parker will graduate from De Anza Community College on Friday and work toward a degree in kinesiology at San Jose State University. Photo courtesy of Chris Parker Jr.

LOOKING AHEAD: In this file photo, Chris Parker Jr. rests on the bench before his number is called to enter a football game for the De Anza Community College Mountain Lions. Parker will graduate from De Anza on Friday and transfer to San Jose State University in August. Photo garnered with permission from Parker's Facebook page

CONGRATULATIONS: Chris Parker Jr., center, holds his diploma while surrounded by family and loved ones. Parker will graduate from De Anza Community College on Friday and work toward a degree in kinesiology at San Jose State University. Photo courtesy of Chris Parker Jr.

When 2018 John F. Kennedy High School graduate Chris Parker Jr. hung up his cleats for the Islanders and enrolled into North Park University in Chicago, Illinois, his dream of playing college football had become a reality.

It soon turned into a nightmare.

After riding the bench and accumulating more than $30,000 in debt, which would have been much worse had he not received a partial scholarship, the 6-foot-tall lineman exited NPU’s failing football program and transferred to De Anza Community College in Cupertino, California.

Dismayed, but not deterred, from the experience of playing, or, rather not playing, but paying for a spot on NPU’s Division III roster, Parker’s flatlined career was given new life.

"Enrolling at North Park affected my football career in more ways than you think,” Parker Jr. said. “I don’t like blaming anybody but myself for my lack of success on the field or anything in life at that. I’m a firm believer that you own up to anything bad you do in life, but I feel like if I just went to De Anza right after high school instead of taking the North Park offer, I would be in a better position physically, mentally, and academically."

Chris Parker Jr., who has been doing his best to keep the unforgivable debt in check, remains a step ahead, but a few credits behind. Besides not all of his units transferring, NPU also cost him a year of eligibility.

“I’m a few credits behind because all my classes didn’t transfer over,” Parker Jr. said. “I lost a year of eligibility without ever playing in a real football game for North Park, and I’m in way more debt than your average kinesiology student.”

Parker Jr., with a bright future ahead and mistakes from the past trailing or left behind, said that enrolling into North Park was “an overall waste of time and money.”

“It is what it is,” he shrugged. "At the end of the day, my main goal of going to college is to get my bachelor's degree in kinesiology and make my mother proud,” he beamed.

JUCO is no joke

When Parker Jr. first suited up for the De Anza Mountain Lions and walked onto the field for the first time, he described it as a head-turning experience. He was playing next to guys with D1 experience. By the time that first practice had ended, he knew the decision to get in the wind and blow away from the Windy City was the right one. He only wished he had made the decision earlier, right out of high school.

"Junior college football competition is 10 times more competitive than D3,” he said. “You have guys there that used to be D1 athletes, but maybe their grades weren’t too good or they probably messed up while they were in D1, so they had to go to a JUCO to prove themselves again.

“All these guys in JUCO are hungry. You’ve got local D1 scouts at these JUCO games, and everyone is trying to show out for them.”

Although, on Guam, the 2020 high school football season was canceled due to coronavirus concerns, several former local high school students have left the island to play junior college football for the Moorpark Raiders in Moorpark, California. Currently, there are several Guamanians playing for the Raiders – two returnees who had not played a down after the 2020 season was canceled, and four newbies.

Playing for a JUCO “will be five times cheaper than messing around with these D3, D2, and NAIA schools straight out of high school,” he said. … “If I stayed at North Park all four years, by the time I finished school, I would’ve owed the same amount of a BMW I8 or a fully optioned-out BMW M8. It’s crazy the amount I would’ve owed.”

In less than 24 hours, Parker will graduate from De Anza and begin the next chapter in his life. He has been accepted into San Jose State University, where he will continue to work toward his degree and, hopefully, become an athletic trainer in the NFL. But first, before he gets there, he has two more years of college, and, possibly, one more year of football. But for that to happen, the big man wants to cut about 25 pounds and get back into shape.

"My playing weight, dating since junior year in high school, has been like 290 to 300 pounds. I’m sitting at 278 right now,” Parker Jr. said. “I’ve been putting in the work every single day, twice a day. I’m just sick of being the heavy, slow guy. Ya know?"

After figuring out his classes at the four-year university, which should take about a year, according to Parker’s estimation, he wants to walk onto the Spartans football team and give his college career one last try.

“I’m taking this year off to work on myself and just get better - maybe come in and play linebacker or edge rusher, maybe even tight end or fullback,” he said. “Who the hell knows, I’ve always wanted to be a quarterback. Maybe give that a shot,” he laughed. “I’m targeting 225-245 pounds, and I want to stay at that weight.”

Parker’s target weight isn’t all about playing football. It has just as much, if not more, to do with professional athletes taking him seriously. He knows that if he makes it to the NFL as a trainer, he has to walk the talk.

“When you think of an athletic trainer, what do you think of?” he asked. “You think of this fit guy teaching you about fitness,” he laughed. “So, that’s another reason why my target weight is 225-245. It’s not just a football change, it’s a lifestyle change."

The death of his father

While Parker Jr. cuts weight and debt, and prepares for the future, he won’t do it alone. But with family by his side offering encouragement and support, he has to do it without his No. 1 supporter, his father.

“My relationship with my dad was a really good one,” Parker Jr. said. “I talked to him every day, even while being out here, just about a bunch of random stuff,” he laughed, remembering his father’s kind-spirited nature.

“The one thing I miss about my dad the most is the support he had for his kids. He’ll support anything you do, as long as it’s something you want to do and not something anyone else is telling you to do.”

"At the end of the day, my main goal of going to college is to get my bachelor's degree in kinesiology and make my mother proud.”