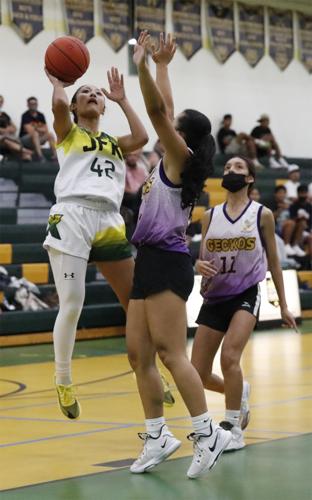 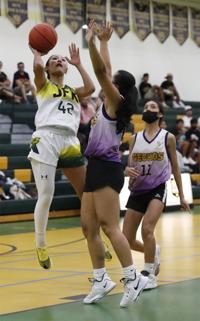 JADA POPS: The JFK Islanders' Jada Han pops for 2 of her game-high 19 points in the first half against the George Washington High School Geckos Thursday, Nov. 3, 2022, at JFK. The Islanders defeated the Geckos 86-23. Matt Weiss/The Guam Daily Post 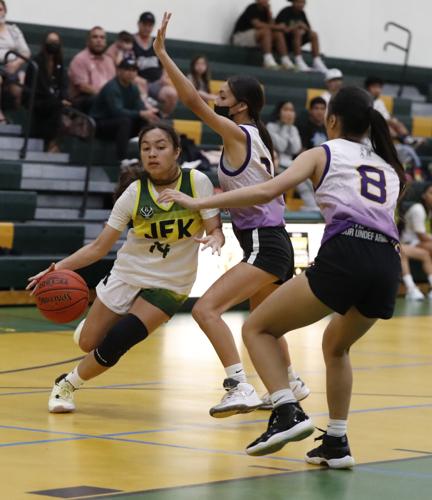 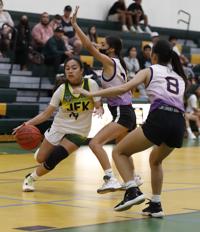 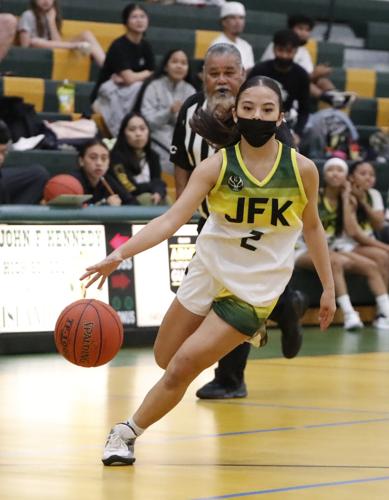 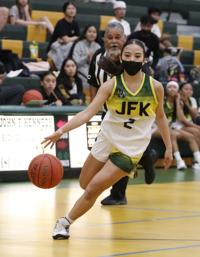 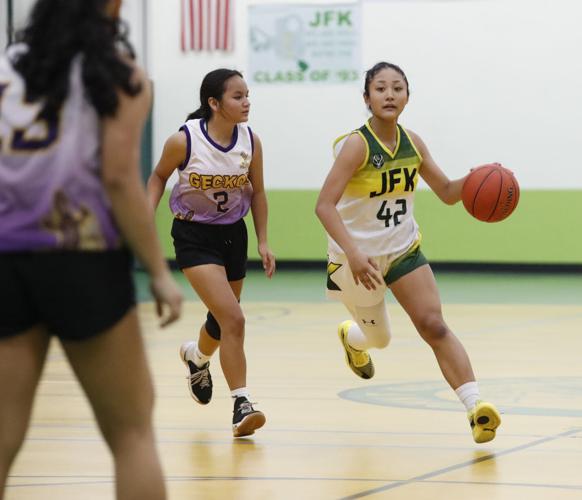 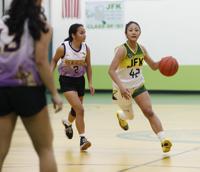 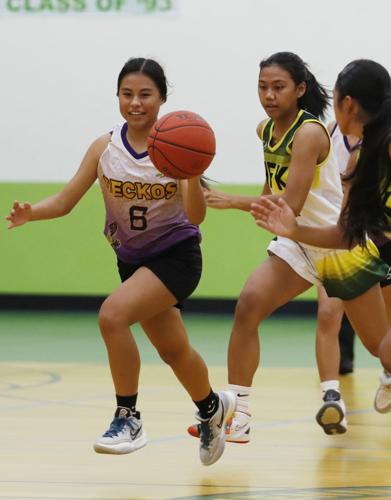 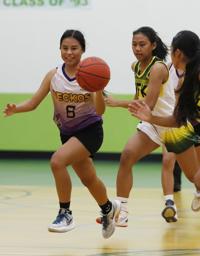 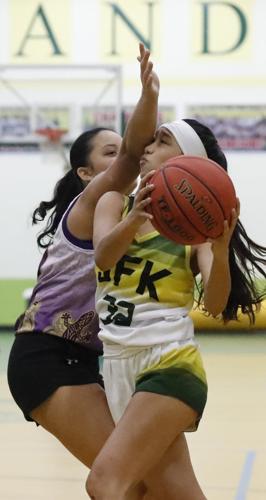 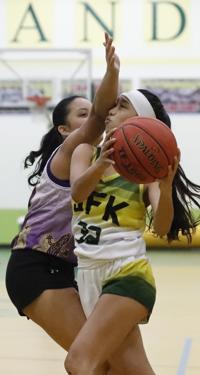 HANNAH HAS IT: The Islanders' Hannah Gogue brings the ball to the basket against the Geckos Thursday, Nov. 3, 2022, at JFK. Matt Weiss/The Guam Daily Post

JADA POPS: The JFK Islanders' Jada Han pops for 2 of her game-high 19 points in the first half against the George Washington High School Geckos Thursday, Nov. 3, 2022, at JFK. The Islanders defeated the Geckos 86-23. Matt Weiss/The Guam Daily Post

HANNAH HAS IT: The Islanders' Hannah Gogue brings the ball to the basket against the Geckos Thursday, Nov. 3, 2022, at JFK. Matt Weiss/The Guam Daily Post

“I really wanted to play and show that our team has still got it,” said the Islanders’ Jada Han. “I think we did really well.”

The Islanders offense was unmatched, but their defensive effort was even more impressive, as JFK held the visiting Geckos to a single point in the second quarter.

Heading into the second quarter with a 15-5 lead, the Islanders poured on the offense and locked down on defense. For the entire eight-minute period, JFK’s Jada Han pressed JFK’s offense, causing multiple turnovers, leading to easy buckets.

“Our press is really what made us score a lot today,” Jada Han said. “If we just keep on working on that, then it'll really be our biggest weapon.”

She said if the offense and press keep improving, the Islanders are going to win games.

To start the third quarter, Jada Han pulled off a 360-degree spin move for one of her fanciest layups. Later in the quarter, she turned a steal and an assist into back-to-back buckets. Despite the Geckos’ effort, turnovers mounted and the game quickly became a runaway.

Jada Han, who was fierce on both ends of the floor, had plenty of help from her teammates. Complimenting her game-high 19 points, Franchesca Aguilar finished with 11 points, most coming from drives to the rim. With points adding up from all angles and every player, every Islander had her name and point total inscribed onto the scoresheet.

In a game that was decided by halftime, JFK’s Kirsten Franco scored 9 points, Hannah Gogue, Philicita Rivera and Maria Paule each finished with 8 points. Teammates Aedlene Olidan chipped in with 7 points and Cadence Guzman scored a cool half-dozen. All 12 JFK roster members scored.

“If all the points are distributed like today, then I think we're going to be be really dangerous against other teams,” Jada Han said. “Our confidence just needs to really boost up this season, and I think we're good.”

The Islanders fiercely overmatched GW, and the Geckos did little to help their own cause. In the second quarter, Aleya Roberto scored the team's only point, a free throw with 1:26 left in the half. Roberto finished with 4 points. Pacing GW’s offensive charge, Kaya Sanchez scored a team-high 6 points. Adding two baskets from 3-point land, the Geckos’ Dariah Mariano and Hailey Pangelinan each drained a shot from behind the arc.

Heading into the the second half with a 38-6 lead, Jada Han and the Islanders were devastating from the field. A few seconds into the period, Jada Han drained her first of two 3-pointers. She scored 10 points in the frame, two shots from deep, a layup, and a short-range jump shot.

“I just wanted to step it up,” she said.

In the fourth quarter, JFK rested its starters, but the bench kept up the pressure. With Jada Han and Aguilar watching the game from the best seats, Rivera scored 6 points and Chloe Franco scored all 5 of her points in the period.

A message from Jada

Regardless of which league, public or private, Jada Han has proven time and again that she is one of the best female basketball players on Guam and has said she dislikes that GDOE ISA and the Independent Interscholastic Athletic Association of Guam basketball leagues remain split.

She doesn’t want to compete against just four other teams, she said. She wants to prove herself against every school.

“I just really want the leagues to get back get back together,” Jada Han said. “I want to challenge private schools again.”

The Okkodo High School Bulldogs earned a 57-24 win in their ISA opener against the Southern High School Dolphins. The Bulldogs shooters opened up the scoring gates to take a double-digit lead.

Tough inside play from Hanna Meinik, Sharm Taiuwei and Joselyn Borja kept the Dolphins from hitting a rhythm. The Dolphins’ Reanne Sinel scored 11 of her team’s 24 points. But the Bulldogs steadily pulled away to ensure their first win of the season. Meinik led the Bulldogs with 17 points.

“I really wanted to play and show that our team has still got it.”