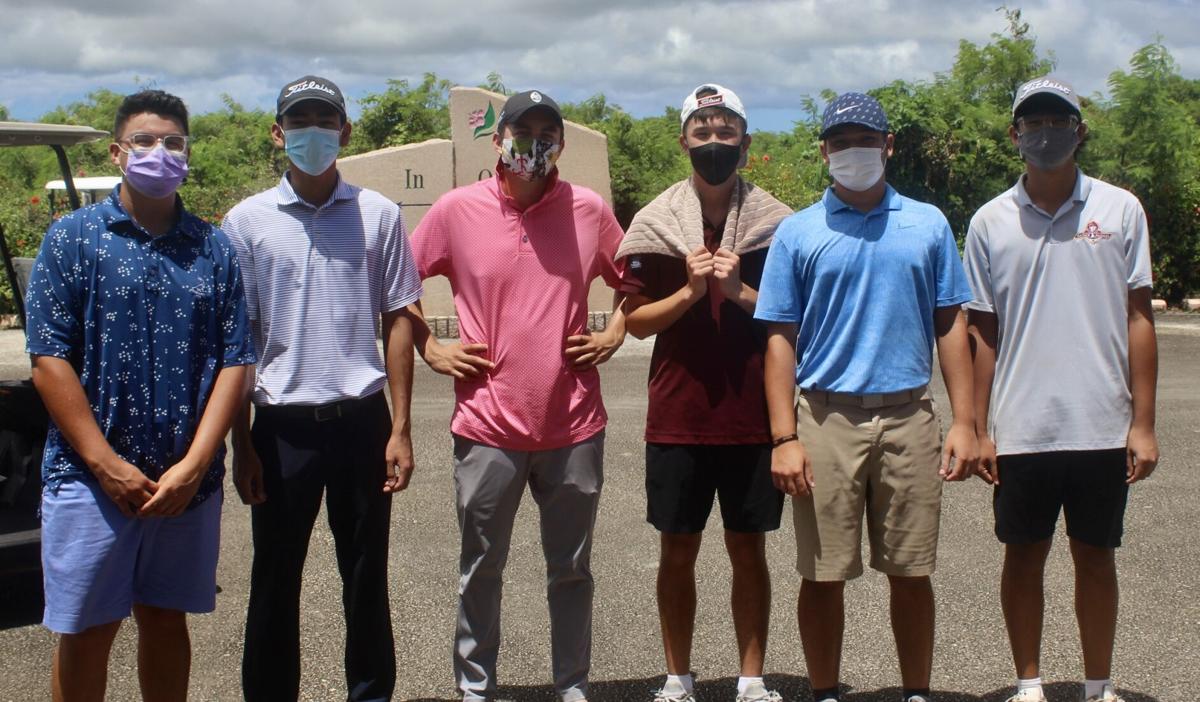 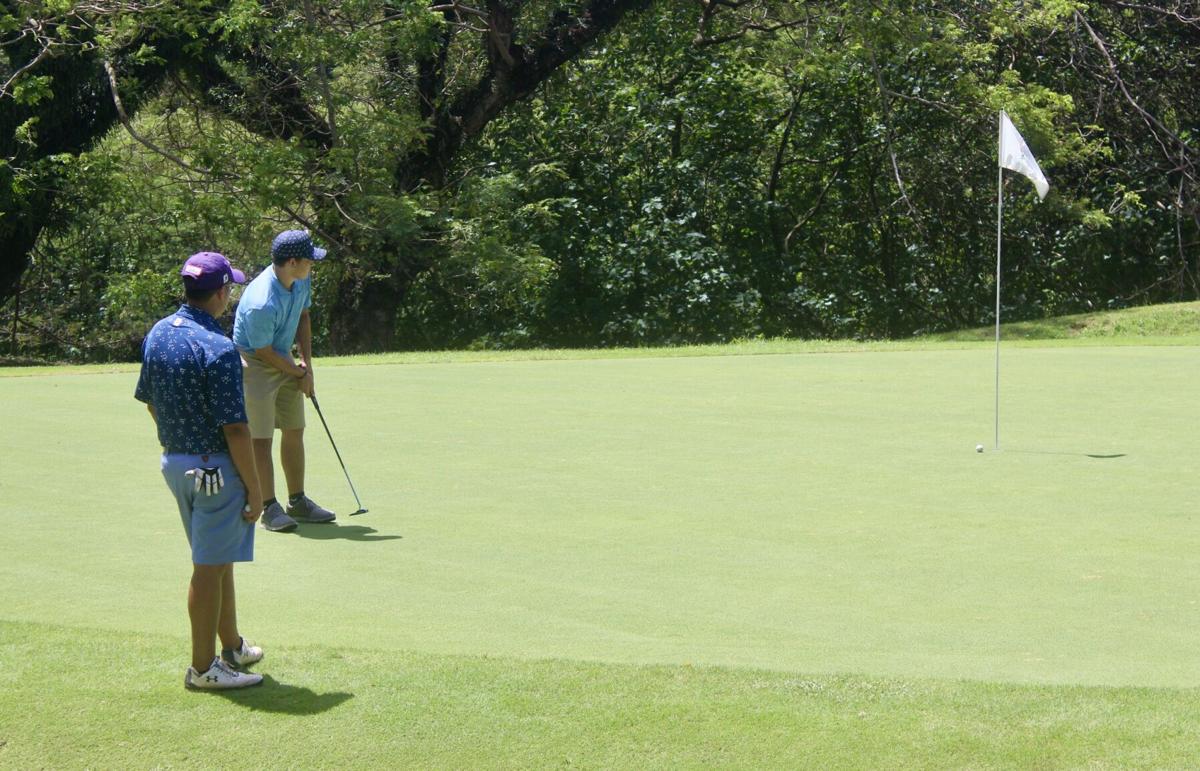 GRINDING OUT: Ivan Sablan sinks a putt on the green with Eduardo Terlaje standing by. Both players will be representing Guam in the IMG Junior World Golf Championship in July. Contributed photo 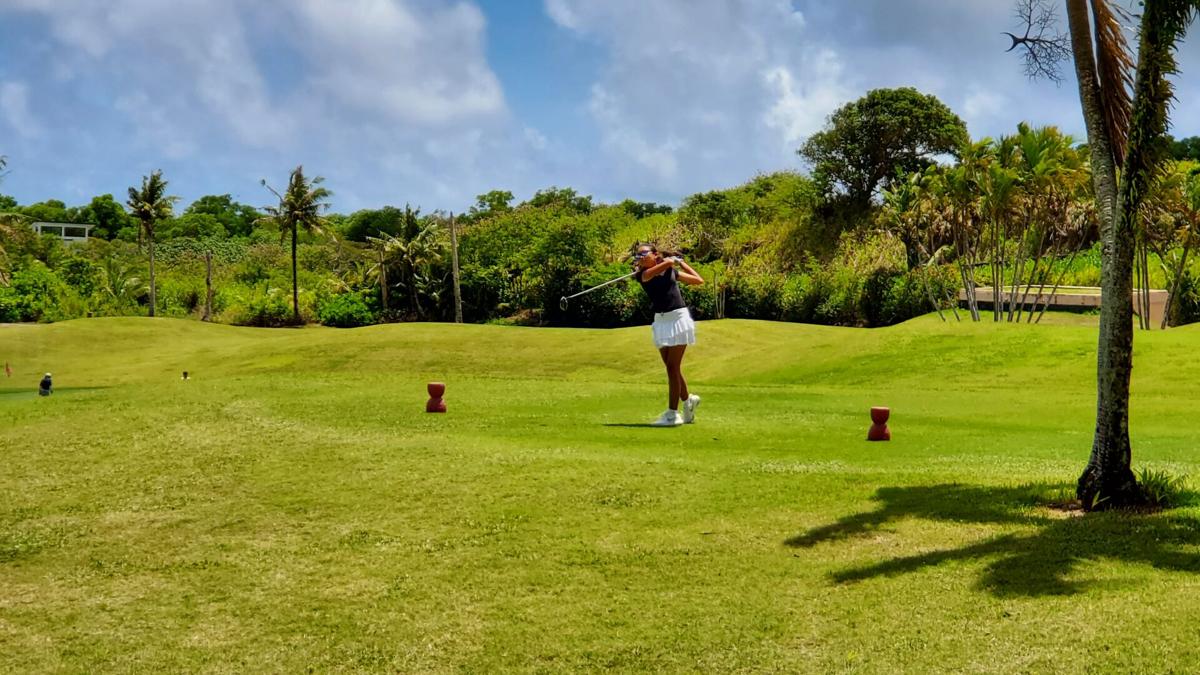 KANG SWINGS AWAY: Kayley Kang, a qualifying athlete for the Junior World Championships, is shown teeing off on the fairway. Contributed photo

GRINDING OUT: Ivan Sablan sinks a putt on the green with Eduardo Terlaje standing by. Both players will be representing Guam in the IMG Junior World Golf Championship in July. Contributed photo

KANG SWINGS AWAY: Kayley Kang, a qualifying athlete for the Junior World Championships, is shown teeing off on the fairway. Contributed photo

The Guam National Golf Federation held the sixth and final round of the IMG Academy Junior World Golf Championships on Saturday with players in the 15-18 division competing to represent the island. The amateur qualifier was open to high school-aged players from all over the island, but the lineup in the boys’ division was dominated by players from the only school to stay committed to coming out on the golf course as a team — the Father Duenas Friars.

Nanpei and Ian Paulino were competing independently, the athletes have been practicing and competing together in the GNGF Men’s Junior Division events. While they may not be able to compete as a team in the Independent Interscholastic Athletic Association of Guam, they’ve kept the FDMS brotherhood alive, working to hone their skills while other teams have been letting their golf clubs gather dust.

“It’s been a grind – me and the FD team have been practicing on the daily. I think our game has really improved since the last time we went out to play this tournament,” said senior Eduardo Terlaje. The pandemic put the brakes on the 2020 championships, but he and the rest of the FD team said they are glad to be out and in competition for this year.

Terlaje shot a 72 in the final round to maintain his overall lead and cement his slot on the Junior Worlds roster. He’ll be repping Guam in San Diego this July, alongside top-ranked junior golfer Ivan Sablan. Ivan shot a final round 78, but his early lead in the qualifier was enough to secure him one of the two qualifying slots.

Friar Anton Lacson came a hair away from beating out Ivan for the Junior Worlds slot. Lacson needed at least a third-place finish in Round 6 to secure one of the slots, however, he shot a 76 and was overtaken by Markus Nanpei, who edged him out in the final round with a 75, keeping Lacson locked into 3rd place overall.

“The competition was so tight that it literally came down to the last day to determine the final two players. This is a testament to how closely matched these players are in skill and ability,” said GNGF President Richard Sablan.

In the final tally, the competitors from the FD squad took up four of the top five slots in the field of 11 competitors. The only contest from a non-Friar came from the 2019 season’s All-Island champ Ryan Lee, who came in second place in the final round with a 73, but finished in 5th place overall.

“This is the only team that’s been out here, consistently, practicing since last year. They’re trying to prove that this is the number one golf team on Guam,” said Mark Nanpei, who is also the former director of the GNGF Junior Division.

While the limited field of players has given the FDMS boys a chance to get ahead, it’s not great news for the trajectory of the sport on Guam. The junior golf community is traditionally active, but with no opportunity for young players to compete in interscholastic events this school year, and COVID-19 putting a strain on recruiting numbers for all sports, the Guam Junior Golf League (which is responsible for junior golf development on behalf of GNGF) is feeling the squeeze.

In the girl’s division, Kayley Kang and Sarah Therrell, two of the best junior players on island came out on top in this year’s IMG Junior qualifier. But, they were two of only three competitors who signed up. Participation is usually lower for the girls than boys, but the unfortunately small turnout is a symptom of lower youth enrollment in general.

As the governing body for amateur players on the island, GNGF has been striving to give younger participants more opportunities to compete and play over the last year. But the necessary restrictions imposed by local golf courses to keep players safe have made it harder to keep the sport accessible.

Something as simple as limiting the number of people who can ride on golf carts has become a roadblock, with courses charging additional fees for carts. The closure of several of the courses throughout the majority of 2020 has also restricted the ability for players to get practice time in, creating another obstacle for potential new players at a time when fresh competitors are very much needed.

“Our grassroots is kind of dwindling, there’s not been much of an interest recently amongst the young people to play golf,” said Richard Sablan. “I’m glad to see the Friars team maintain their dedication, and we hope that they’ll inspire the younger kids to get into the sport.”

While it has been more difficult for the younger players to have access to practice facilities, the GNGF is hopeful that restrictions will start to loosen up more as COVID-19 cases continue to remain relatively under control here in Guam.

And with the pandemic changing up the options that young athletes have, Sablan said he is sure that junior golf will see a resurgence. It’s a non-contact sport that lends itself to distanced play, making it a suitable option for players and parents who might not have considered it before. Then, of course, there’s the simple fact of how enjoyable it is to get out on the greens.

“It’s always good to be out on the golf course,” Sablan said. “I can’t think of a better place to spend your free time.”