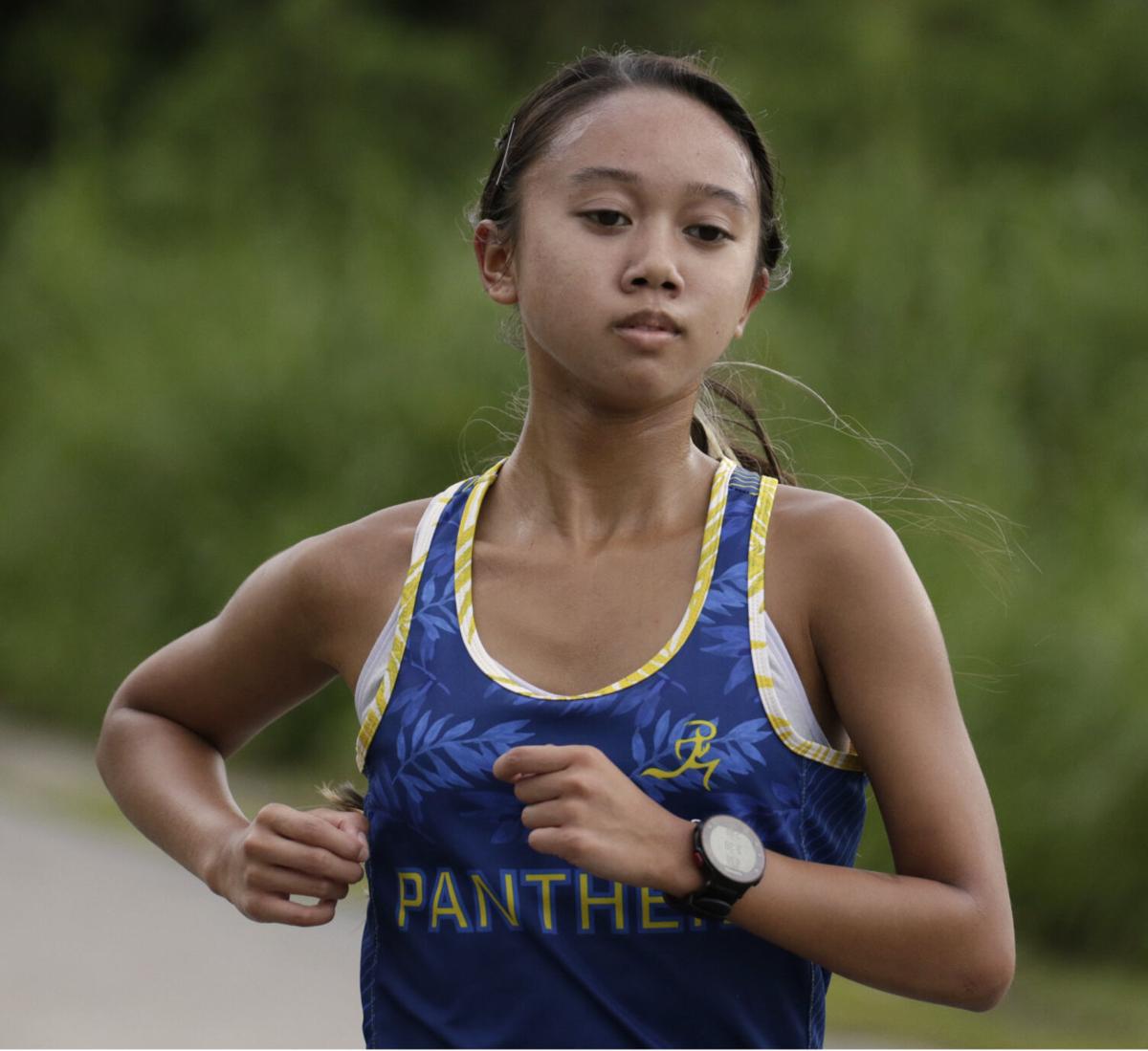 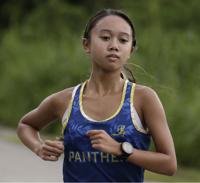 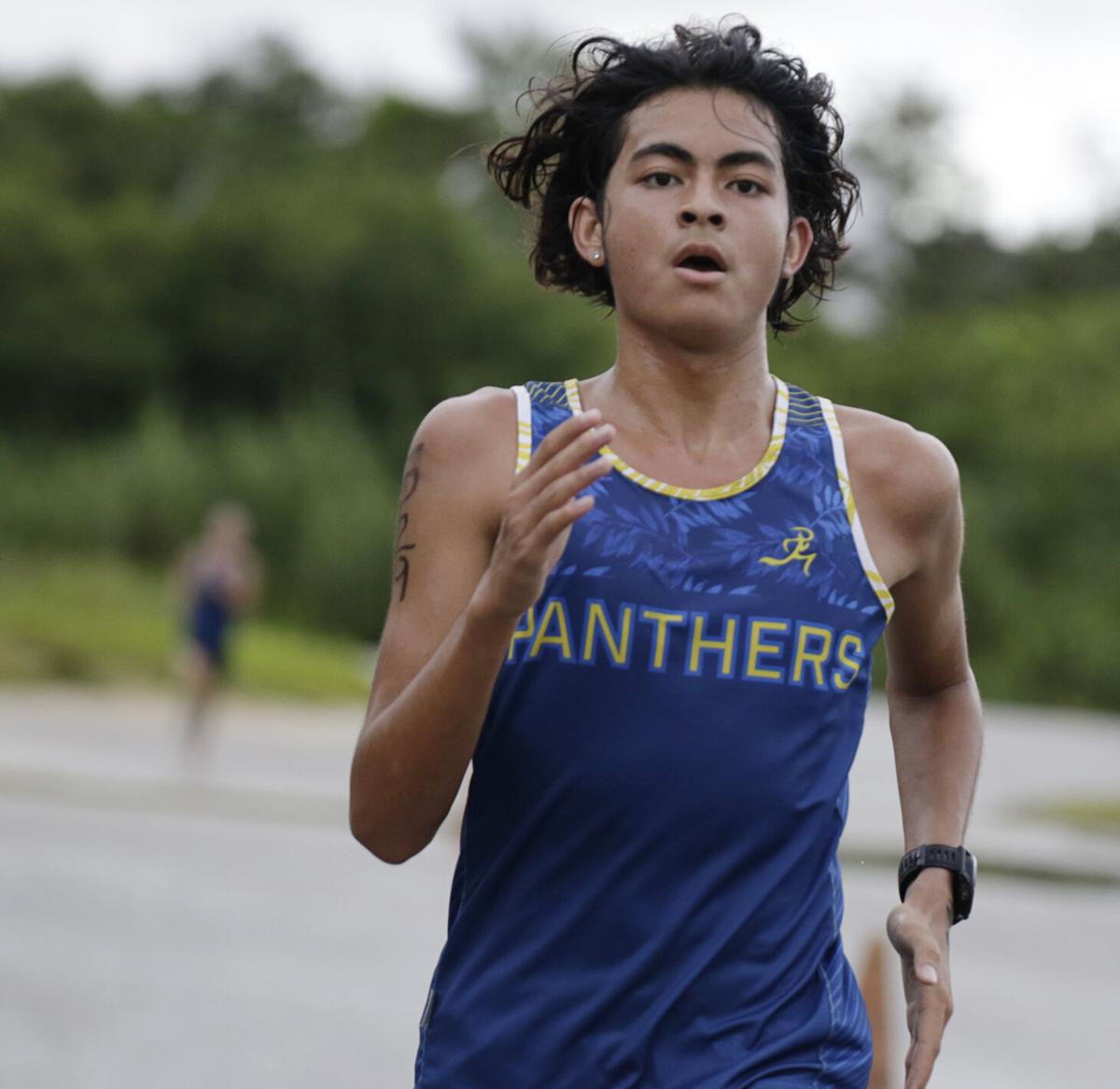 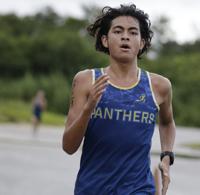 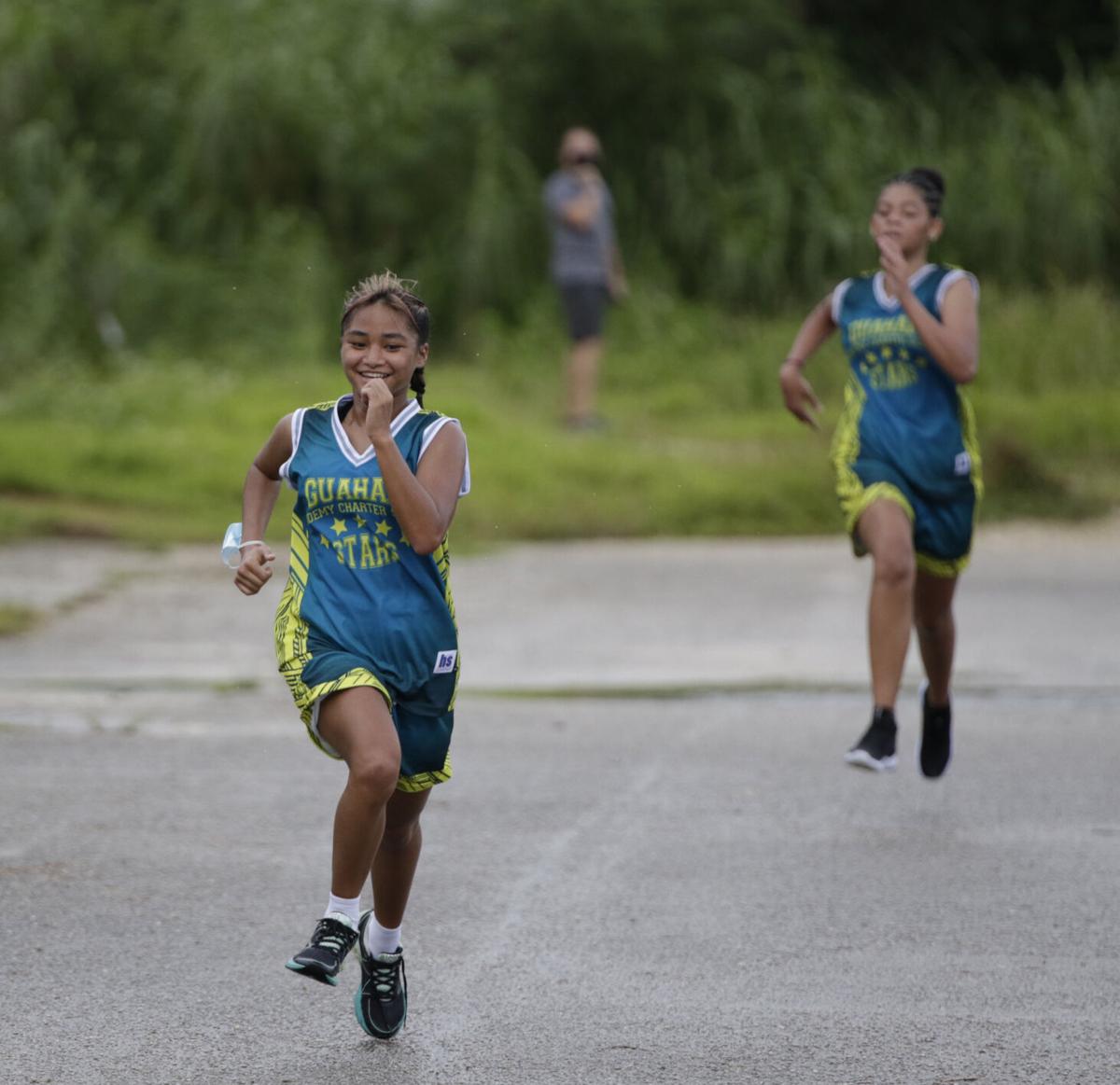 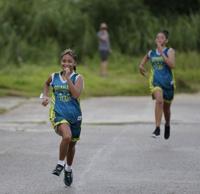 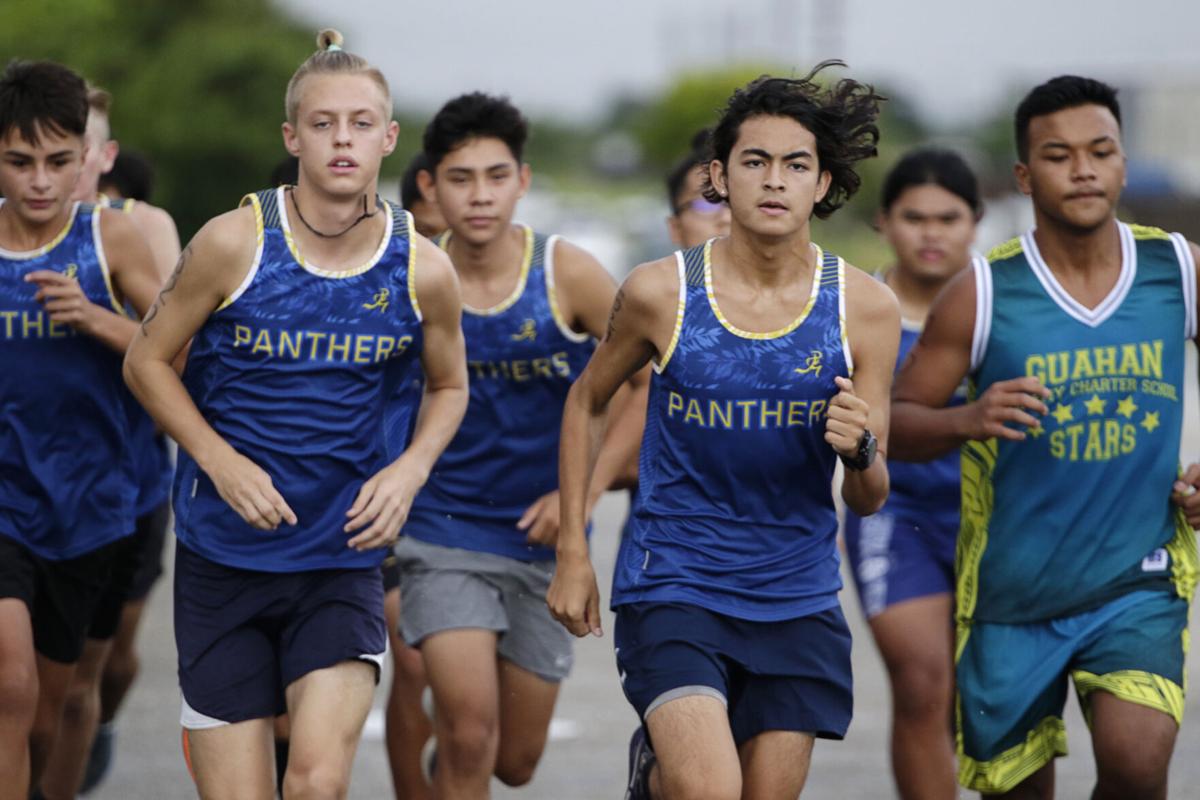 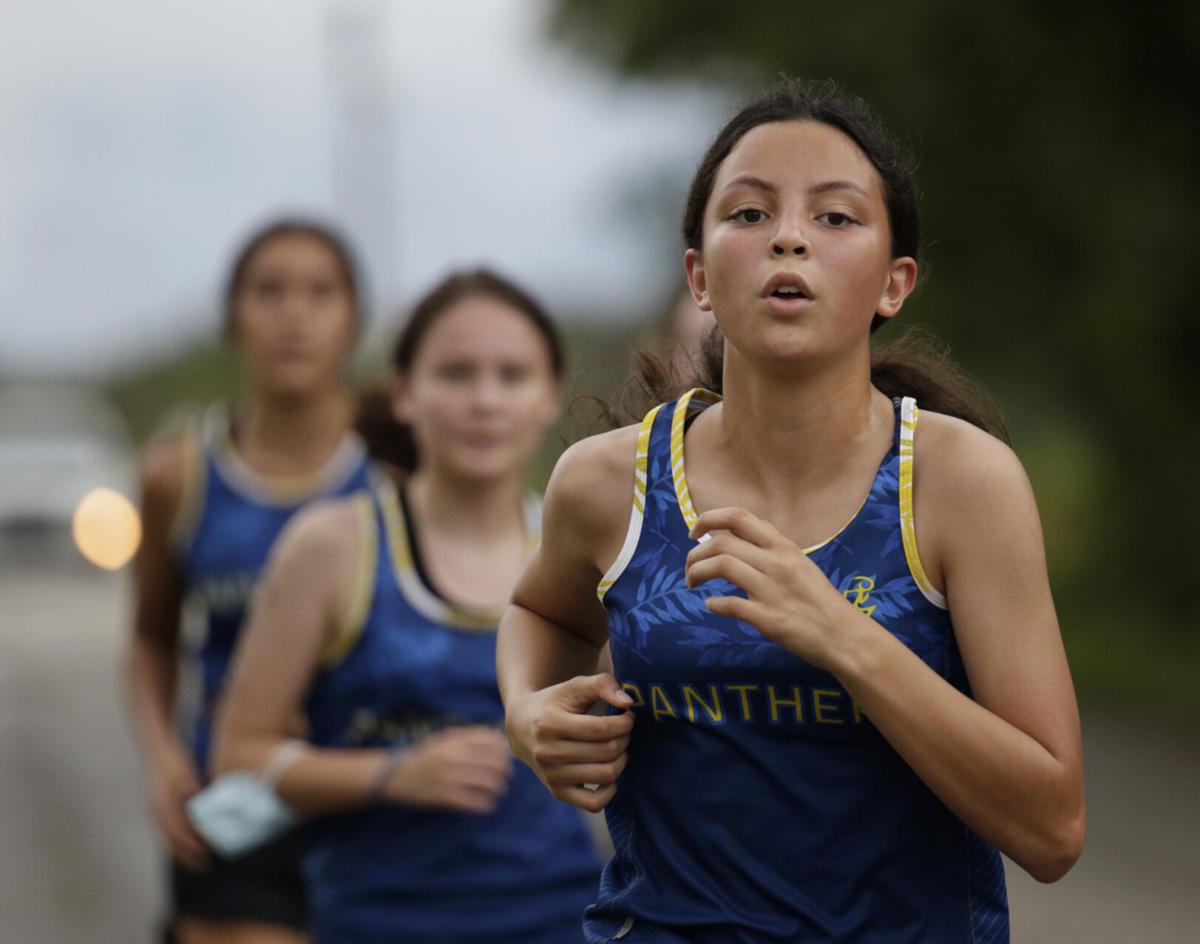 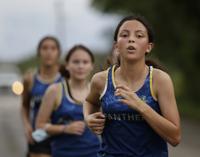 LEVY LEADS: Guam High's Alexandria Levy stay steps ahead of, from front to back, Catalina Perez and Sascha Horn during an IIAAG cross-country meet against the Guam Academy Charter School Starfish on Oct. 21, 2021, at Tiyan. Matt Weiss/The Guam Daily Post

LEVY LEADS: Guam High's Alexandria Levy stay steps ahead of, from front to back, Catalina Perez and Sascha Horn during an IIAAG cross-country meet against the Guam Academy Charter School Starfish on Oct. 21, 2021, at Tiyan. Matt Weiss/The Guam Daily Post

"Personally, I wanted to maybe set a PR, but I couldn't do that today,” said Rink, who, at 19:06.00, had set his personal record on Harvest Christian Academy’s course on Monday. “So, I'm a little disappointed.”

During the hour leading up to the race, a pounding downpour filled the course with puddles, making the pavement a little bit slippery.

“We're very lucky that it only rained a little, but it was still very muddy,” Rink said. “And there are some spots where you barely have any grip to go up.”

With Rink’s closest non-Panther competitor, GACS runner Trey Muna, more than seven minutes behind, his greatest challenge came from the course, which he said involved choosing to avoid puddles or run through them.

“Everybody has a personal reason why they want to avoid puddles,” he said. “I tried going through some of them, but I felt myself slowed down a little so I started avoiding it after the first lap.”

At last season’s All-Island championships, Rink said, he was unmotivated and placed 10th. This year, his mind is set for the top of the podium.

“I've made a lot of friends since last year and I feel a lot tighter with all my teammates,” Rink said. “So, this year, I feel like I have a good shot.”

But with five more meets before All-Island, which is scheduled for Nov. 11, Rink said he still has more to learn and improve upon. He shared that he wants to become a more consistent runner and get better with expending energy.

“I would like to work on keeping the same pace throughout the entire race,” he said.

Rink, with newfound motivation made possible by in-person education and teammates remaining healthy, shared that a roster filled with talented student-athletes pushes him to become a faster runner.

“This year, we have some extremely fast runners throughout our entire team," he said. “We have eight boys that have a sub-six mile and six that have a sub-5:30 mile. That says a lot about our team. I feel like we're not just individually strong, but overall strong as well."

Compared to other courses, Paz noted the flatness of the Tiyan course, a two-lap route around the Guam Department of Education headquarters.

She said it "was flatter terrain, easier for our feet to gain traction rather than the mud from the previous courses.”

Paz said she is looking forward to competing against against St. John’s School runner Jordan Baden. The two speedsters are slated to clash on Oct. 25.

“I don't know her, but I know she's a fast runner, and I'm excited to compete against her,” Paz said.

At GACS, with only 1,015 enrolled students, and in its first year of interscholastic sports, racing is more about giving its student-athletes an outlet for competition and representing their school than it is about winning.

“It’s a great experience because I have my team alongside, and is cool watching us grow as a group,” Muna said.

“I enjoy the ability to represent our school, our name, and to have an actual team alongside me,” he added. “For years, we've been trying to get sports into GACS. This is our first year, so we're going to try to make the best of it.”

“This year, we have some extremely fast runners throughout our entire team."