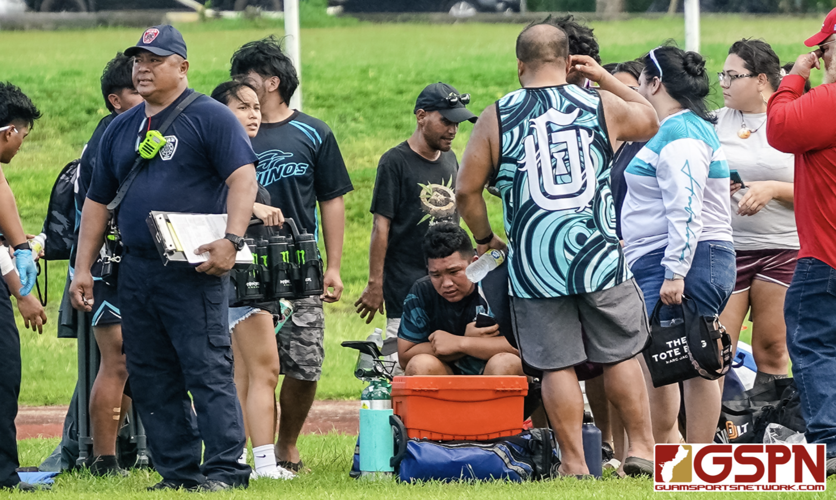 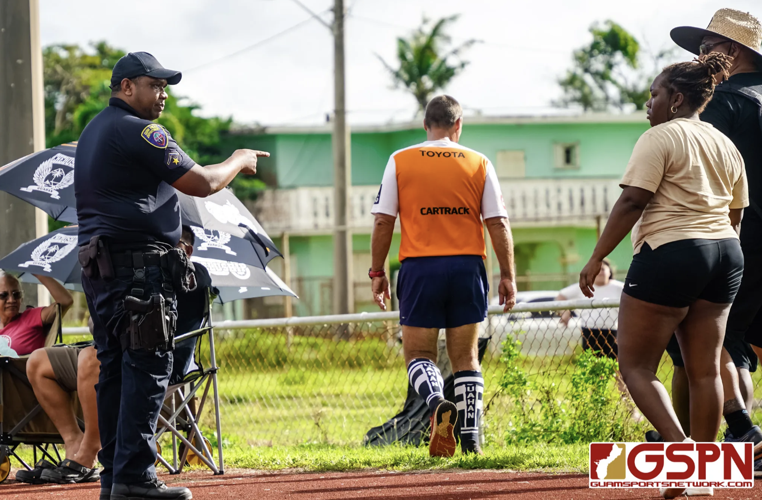 MORRISON: A GPD officer points to referee Ross Morrison, center, who was officiating a GDOE ISA/GRU boys varsity rugby game between the Guam High School Panthers and the Southern High School Dolphins Saturday at George Washington High School. Late in the game, a riot broke out and GPD arrived on scene. Matua Salas/GSPN

MORRISON: A GPD officer points to referee Ross Morrison, center, who was officiating a GDOE ISA/GRU boys varsity rugby game between the Guam High School Panthers and the Southern High School Dolphins Saturday at George Washington High School. Late in the game, a riot broke out and GPD arrived on scene. Matua Salas/GSPN

In the second boys varsity rugby game on Saturday, a Guam Department of Education Interscholastic Sports Association/Guam Rugby Union match featuring the undefeated Guam High School Panthers and Southern High School Dolphins squaring off at George Washington High School field in Mangilao, a fight broke out between the teams and at least one spectator who entered the pitch during play.

The altercation happened late in the game with the Panthers leading 28-0.

“ISA league has been notified and will address the issue when the facts are evaluated,” said Paul Claros, a Guam Rugby Union official. “Decisions will be made on reasonable grounds and based on supporting evidence. The GRU will follow guidance from ISA.”

Marv Linder, ISA director, told The Guam Daily Post that the league will be investigating the incident.

“We are waiting for reports from officials and witnesses,” said Linder, who is also the Southern High School athletic director. “Once we receive all information, the ISA Board of Control will review and decide the outcome for players and teams.”

The Guam Daily Post obtained videos of the altercation.

In one of the videos, in the moments leading up to the fight, a scrum can be seen taking place near midfield with head official Ross Morrison monitoring the action. A female spectator, close or behind Southern’s bench, can be heard screaming “Southside, southside, southside.” Another female spectator was recorded, from close to the same position as the screaming spectator, saying, “Why the (expletive) are you waiting for him?”

Guam High won the scrum and kicked the ball onto Southern’s side of the pitch. The kick was fielded by a Southern player who advanced the ball and pitched it to a teammate who was tackled near midfield. On the next play, Southern advanced and was tackled after gaining a few meters. On the next two plays, Southern tried advancing but was stopped both times. Before the start of the next play, before a Dolphin taps the ball with his foot to begin play, a Panther delivers an aggressive tackle and then the altercation ensues.

A Dolphin, who was a few meters away from the action, ran over to the Panthers’ tackler and pushes him. Another Dolphins player pushes the Panther to the ground and a melee ensues.

At this point, a spectator, who was wearing black pants, a black shirt, a black hat and red shoes, pushed the Dolphins player who had pushed the Panthers player to the turf.

Other spectators also entered the pitch.

Billy Chennaux, a GRU official, can be seen ordering the first spectator to leave the field.

The altercation appears to last about one minute, but it is unclear if the videos obtained by the Post captured the entire incident.

Coaches from both teams are seen trying to break up the riot. Morrison was also seen blowing his whistle several times and instructing the spectators to leave the field. A GPD patrol car's siren can be heard in the background as it approaches the field.

The teams appeared to separate as the Dolphins retreated to their bench and many of the Panthers huddled near midfield.

Guam Sports Network reported that a Dolphins player was injured in the fight and received treatment from Guam Fire Department. GSPN reported both teams were ordered to leave campus.

As of press time, GPD confirmed no arrest was made but a complaint was received at GPD's central precinct.

“Once we receive all information, the ISA Board of Control will review and decide the outcome for players and teams.”