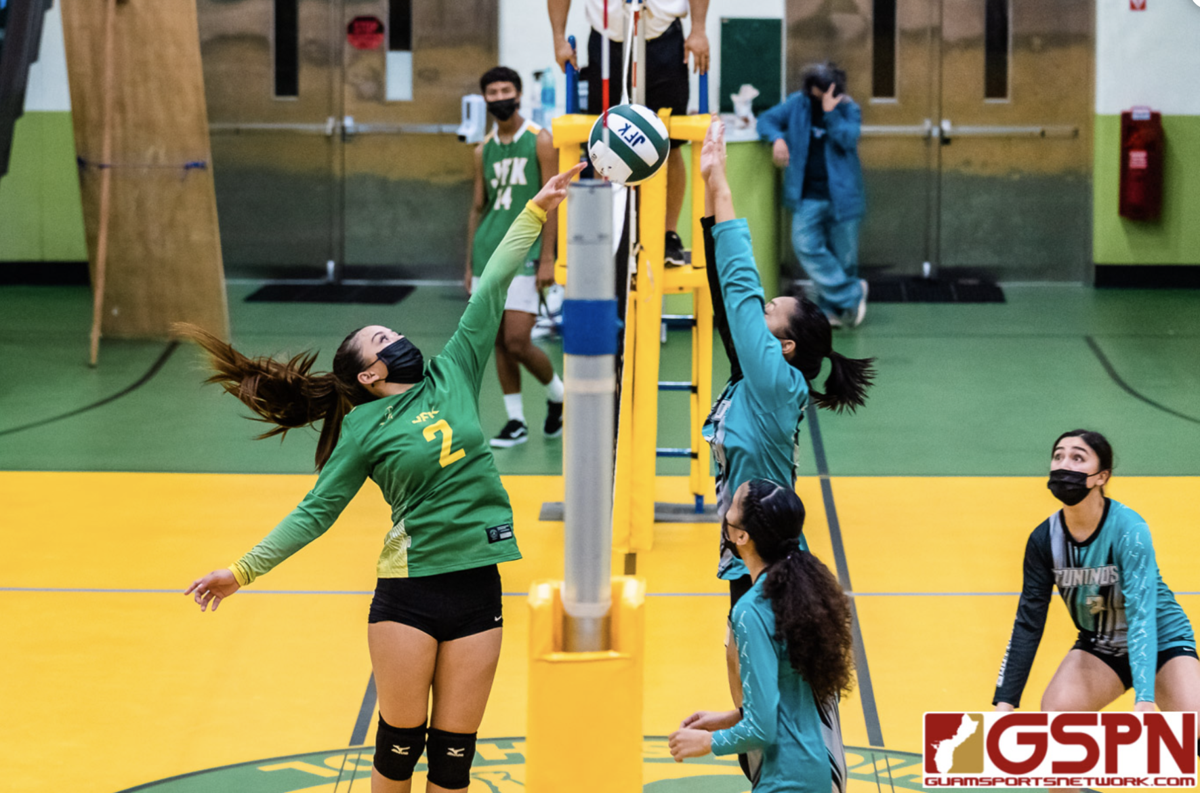 SETTER AT THE NET: The John F. Kennedy Islanders' Philicita Rivera rises up to win the tip at the net in an ISA matchup Monday evening at the Upper Tumon campus. Michael Blas/GSPN 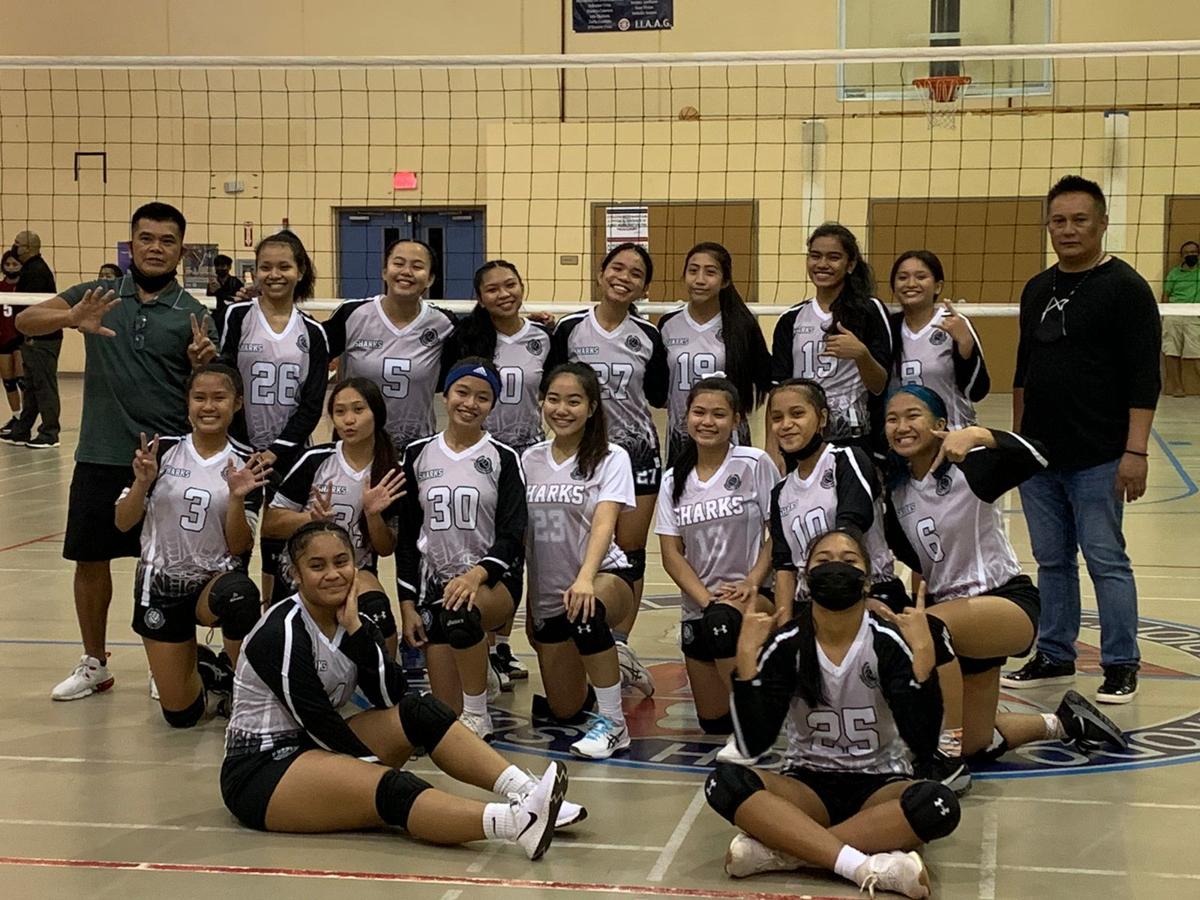 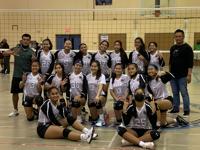 SHOOTING FOR A CHIP: The Simon Sanchez High School Sharks improved to 7-1 after defeating the Okkodo High Bulldogs in four sets Monday at the Okkodo gym in Dededo. Contributed photo 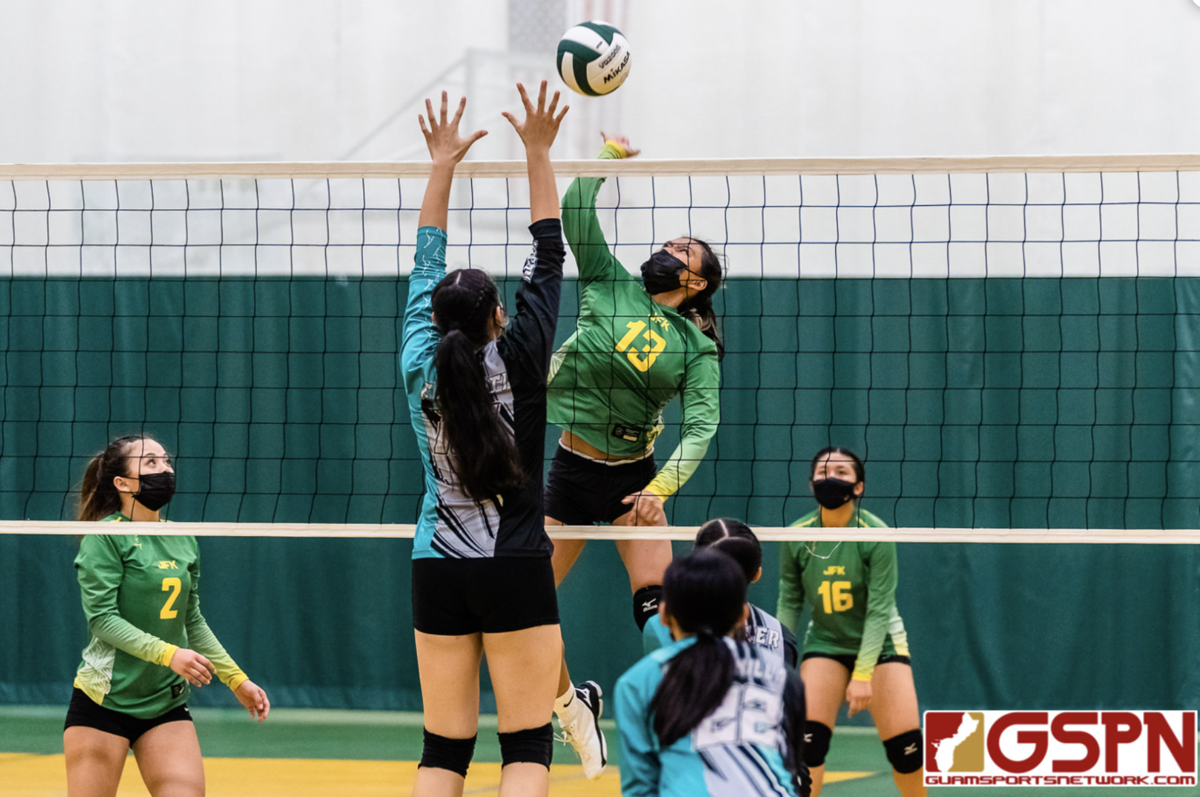 LOOKING FOR A TITLE: The JFK Islanders' Alessandra Pagdillao hits the ball over the net in an ISA matchup against the Southern High Dolphins Monday evening at the Upper Tumon campus. Michael Blas/GSPN

SETTER AT THE NET: The John F. Kennedy Islanders' Philicita Rivera rises up to win the tip at the net in an ISA matchup Monday evening at the Upper Tumon campus. Michael Blas/GSPN

SHOOTING FOR A CHIP: The Simon Sanchez High School Sharks improved to 7-1 after defeating the Okkodo High Bulldogs in four sets Monday at the Okkodo gym in Dededo. Contributed photo

LOOKING FOR A TITLE: The JFK Islanders' Alessandra Pagdillao hits the ball over the net in an ISA matchup against the Southern High Dolphins Monday evening at the Upper Tumon campus. Michael Blas/GSPN

George Washington High had a bye, but the John F. Kennedy Islanders owned their match in straight sets, while Guam Adventist Academy and Simon Sanchez High scraped together wins in five and four sets, respectively.

With the wins, the Geckos, Sharks and Islanders cemented their berth in the playoffs, holding the top three spots in that order. The fourth spot is a toss-up and will come down to the final two weeks with GAA and Tiyan earning identical 3-win records, and Southern and Okkodo holding two wins apiece.

The John F. Kennedy High School Islanders improved to 6-3 on the season by defeating the Southern High Dolphins in straight sets 25-13, 25-23, 25-20 in an Interscholastic Sports Association Girls Volleyball League showdown Monday evening at the Islanders gym. Southern falls to 2-7 on the season after the loss.

Led by sophomore setter Philicita Rivera, JFK used just enough offense to overcome an error-filled contest to avenge an earlier season loss to Southern. The first time these teams met, Southern swept JFK in sets, which made Monday’s victory a little sweeter for the Islanders.

Rivera was able to catch the Dolphins off guard on three different occasions for setter dumps for three kills of her own, but she also was able to get five different hitters in on scoring for the night for a balanced JFK attack.

“I wanted all of my girls to get as many hits as possible because I know they’re all really good,” Rivera said of her approach to working the ball around.

JFK’s Alessandra Pagdillao led all Islanders with five kills while Maria Calvo and Tommie-Lyn Santos had four kills each. Calvo also was big at the service line, scoring four aces on the night.

The Islanders cruised to an opening set victory, but Southern showed resolve in the second set, threatening a comeback after a string of JFK hitting errors, setting up a 24-23 situation. The second set would land in favor of the Islanders, with Southern faulting on a hitting error at the net.

The Dolphins took their first lead of the game 16-15 in the third set. JFK regrouped and retook the lead after back-to-back aces from libero Lyca Alves, part of a 3-0 run to go up 20-17. Kills from Santos and Gabby Fernandez gave the Islanders momentum while Calvo ended the evening from the service line with an ace 25-20.

“It was all about keeping our composure,” Rivera said, explaining what the key point was in closing out the set after trailing for the first time. “We had to have a strong mindset in order to finish out that set.”

Rivera appeared to tweak her ankle late in the third set, but still powered through to deliver clean sets on all three of the Islanders final kills to win the game.

JFK will travel to face top-seeded George Washington High School next Monday as the season comes to its final two weeks of play. Southern will travel farther up north to face the second-seeded Simon Sanchez Sharks on Monday as well.

Simon Sanchez High School overcame a resilient Bulldogs squad to pick up a four-set win in ISA action behind stellar team play. With sophomore standout Kayna Kanemoto patrolling the net, the Sharks got into a quick rhythm, reeling off straight-set victories.

The Bulldogs hit their stride in the third set behind a string of Sanchez errors and strong play from Sharm Tauiwei and Tiarah Muna. The Sharks struggled to find a rhythm as Okkodo found holes in the back corners to inch upward. The Sharks’ Kanemoto and Janelle Almoite gave the Sharks huge moments to knot up the game three different times. But, the Bulldogs eked out a 25-23 win off a corner pocket kill and a Jasmine Samson ace.

Coming into the final stanza, the Sharks got down to business with huge kills from Hanna Meinik and Kanemoto.

With Sadie Tumanda, Kanemoto and Almoite running the show, the Sharks pulled up to an easy 18-12 lead. The Bulldogs showed some fire behind Tauiwei to get within five at 20-15. The game wasn’t without its hustle plays to feed the fans, but the Sharks defensive line, led by Tumanda and Kanemoto, countered a more aggressive Okkodo team to stifle any hopes of a comeback. Almoite called game with an ace to keep the Bulldogs away at 25-17.

After the game, Kanemoto said that last year was tough for the young Sharks, who sported a losing record.

“We just worked hard and wanted to be better,” said the sophomore. “So, now we are here, … we want to play for a title.”

It’s not a fluke that the Sharks are playing better volleyball, she said, adding the team has been working hard in practice and on the court to fix gaps in communication.

Looking at her team, Kanemoto said the key will be keeping their heads up after mistakes.

“It’s easy to let mistakes bring you down, … my job is to lift the team,” the middle blocker said. “I try to keep everyone’s spirits up and make them smile, even when they’re making mistakes.”

The best thing about her team, she said, is that they talk and work together. Moving forward, she said, the focus will be on ensuring the vibes stay positive, the hitters keep hitting and the work gets done.