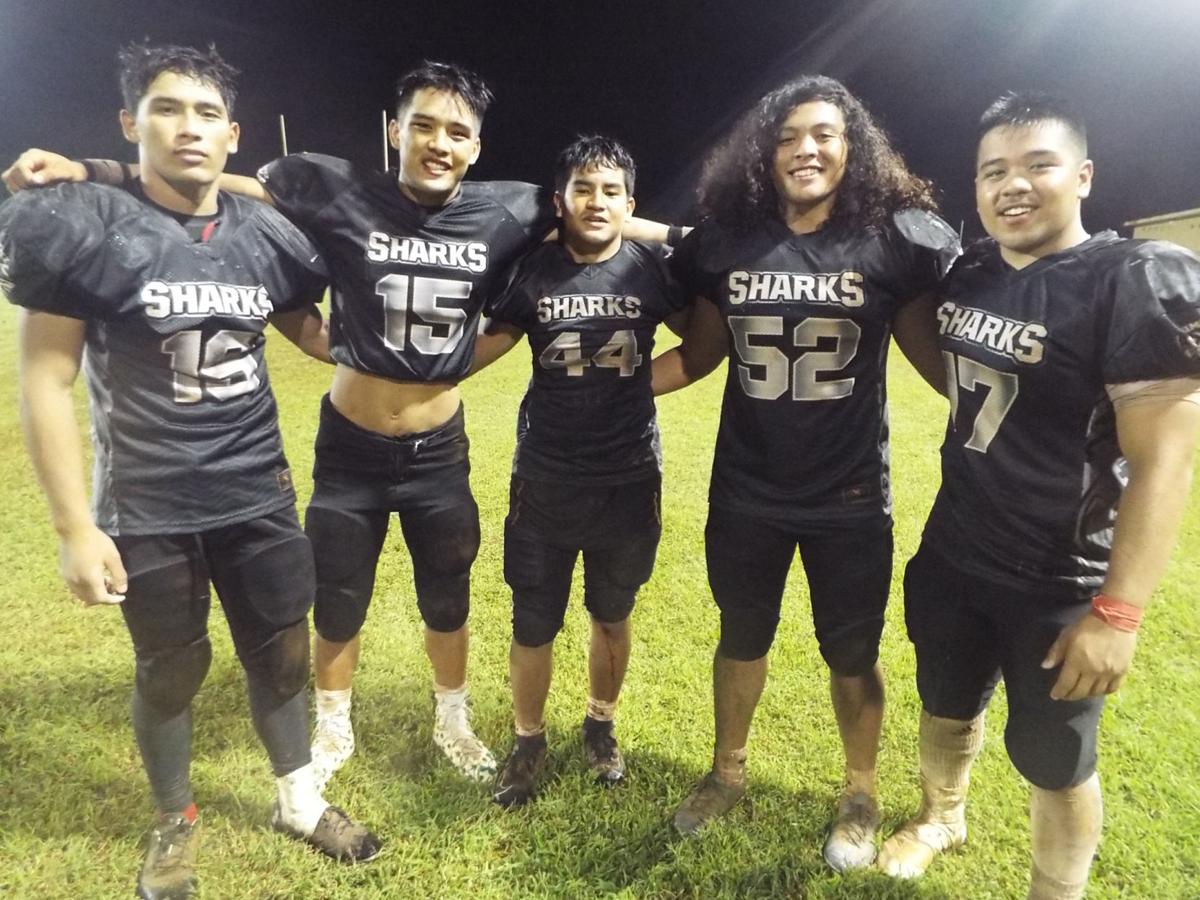 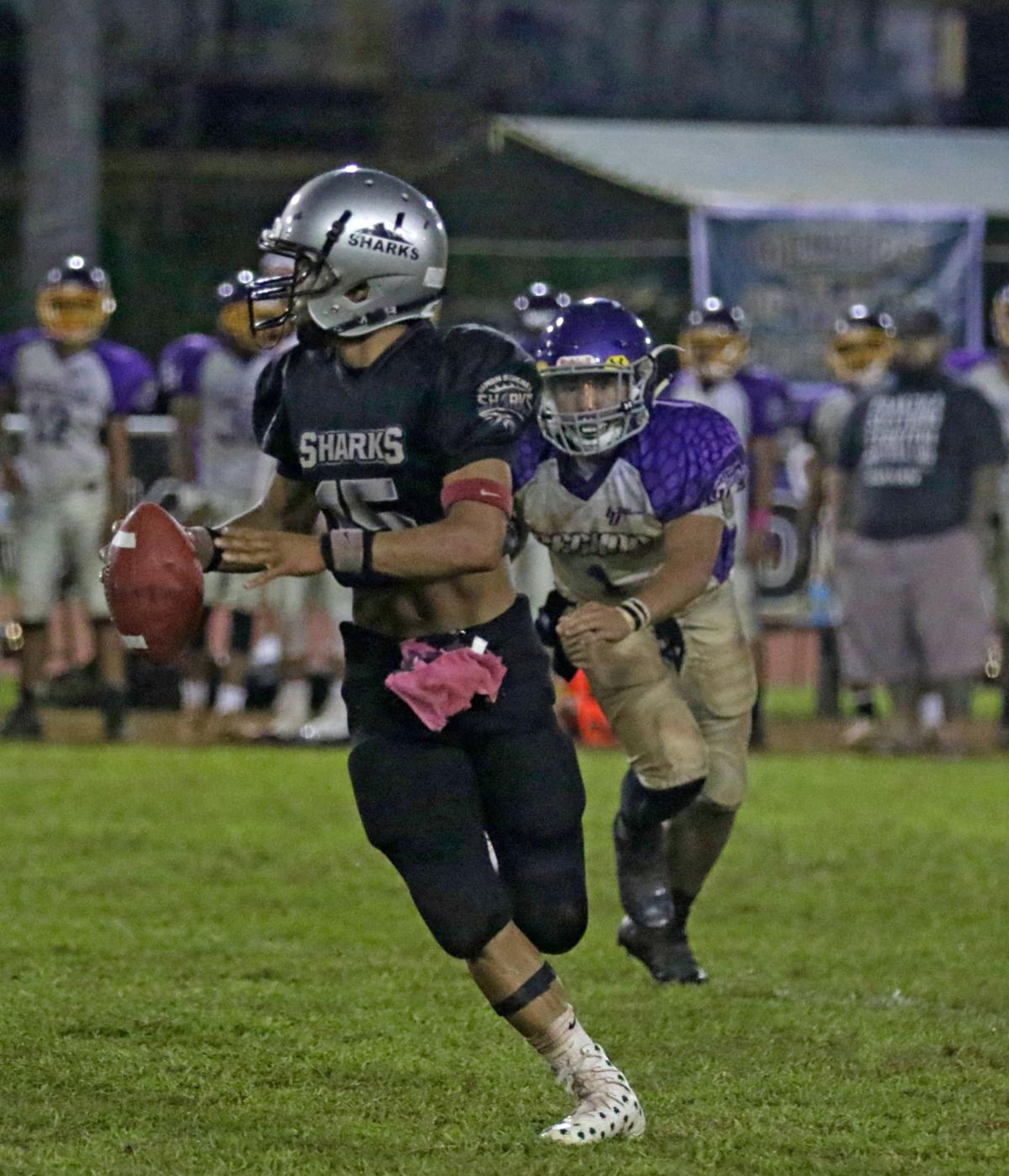 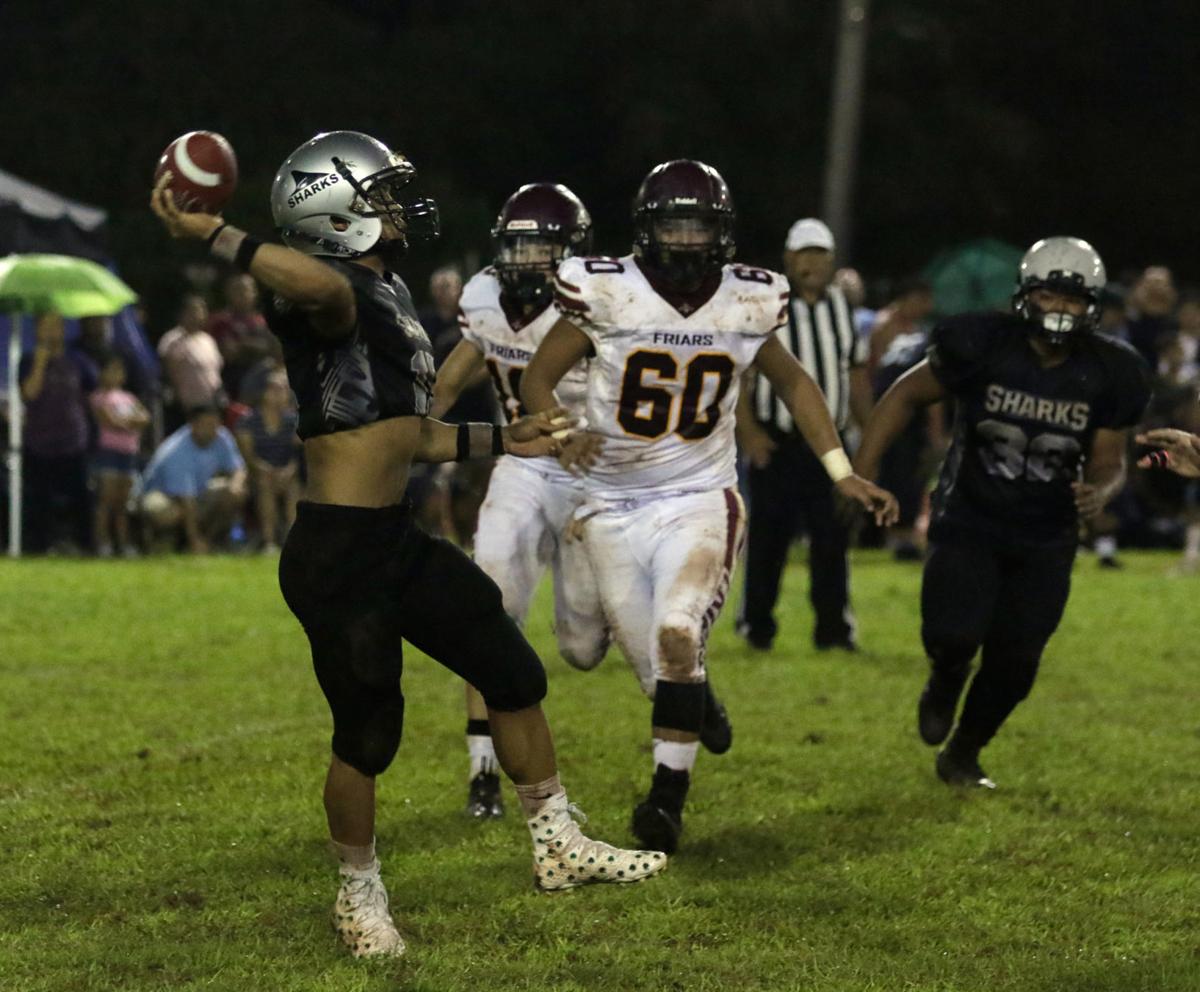 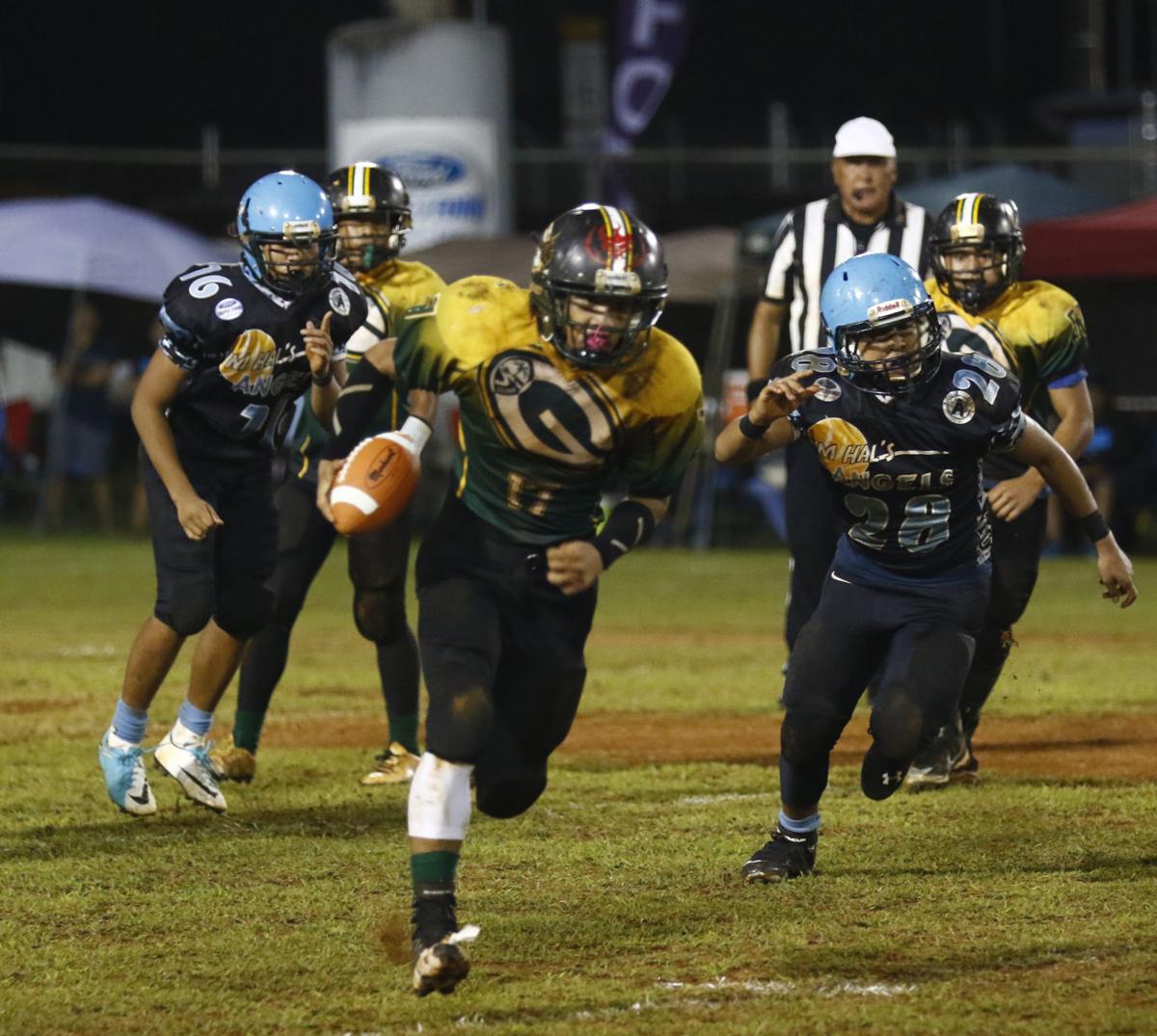 FINDING SUCCESS: In this November 2017 file photo, Matua Packers' Jayton Penaflor picks up a first down late in the game during the Triple J Ford Guam National Youth Football Federation championship game against the Windward Memorial Hal's Angels at Hal's Angels Field in Dededo. The Packers defeated the Angels 14-13. Penaflor, who went on to become a successful Simon Sanchez High School multisport athlete, is graduating in June and has enlisted in the Guam Army National Guard. Matt Weiss/The Guam Daily Post

FINDING SUCCESS: In this November 2017 file photo, Matua Packers' Jayton Penaflor picks up a first down late in the game during the Triple J Ford Guam National Youth Football Federation championship game against the Windward Memorial Hal's Angels at Hal's Angels Field in Dededo. The Packers defeated the Angels 14-13. Penaflor, who went on to become a successful Simon Sanchez High School multisport athlete, is graduating in June and has enlisted in the Guam Army National Guard. Matt Weiss/The Guam Daily Post

Editor’s note: The Guam Daily Post reached out to the athletic directors and a few coaches from all schools on island for recommendations of senior athletes to profile for our features.

Editor's note: This is the second part of a two-part article chronicling Simon Sanchez High School multisport athlete Jayton Penaflor. As a member of the Sharks varsity football, soccer, rugby and paddling teams, Penaflor emerged as one of the school's elite athletes.

In 2019, in his first-ever year of paddling, Penaflor and the mighty Sharks topped the podium in the Independent Interscholastic Athletic Association of Guam 500-meter and 1,000-meter events.

“Honestly, it really sucked,” Penaflor said. “I was so excited for this year because it is our senior year."

When Penaflor’s friends tried to convince him to try out for paddling, the multisport athlete didn’t give it a lot of consideration. Respected islandwide as one of the best high school football players, the thought of competing in a noncontact sport seemed foreign.

“After the rugby reason, a few of my friends started calling me and they were like, ‘hey, man, come out for paddling.’ I was like, honestly, ‘let me give it a shot.’ … I thought I would hate it. I thought I would drop out or go join track.

“I ended up falling in love with it."

For Penaflor, who is more familiar with running the Sharks offense and making bone-crushing tackles, paddling was a big adjustment.

“… It felt really weird, at first, he said. “I had never done a sport that had no contact."

When Penaflor was younger, he said, he was a naughty kid. As an S.A. Benavente Middle School student, he was incorrigible. But, over the years, several role models entered into his life and helped shape him into a respectful young adult. Gaining acceptance in the Simon Sanchez High School Army Junior ROTC, and through football, his gaze turned outward, and he learned humility and respect.

“I think he’s going to be very successful with everything he does,” said Sanchez head football coach Jim Naholowaa.

When Penaflor first entered the Sharks football program, in his junior year, Naholowaa was impressed with his work ethic. No matter what was asked of him, including bulking up and hitting the weights, he delivered.

“He came in, and we got him on weights,” Naholowaa said. “He was dedicated and stuck with it. …

“The kid worked hard every day.”

Penaflor, during his first two years of high school, focused on JROTC and football and hadn’t given much thought to playing other sports, a decision he now regrets. While football will always be his first fling, ditching the pads and mixing it up on the rugby pitch was liberating.

“… I always said, ‘Nah, I’ll never do rugby, football is my sport,” he said. “I wasn’t thinking straight when I was in my freshman year. Now, I’m full of regrets.”

For Penaflor, it was love at first hit.

“The first tackle I made without shoulder pads and helmet was amazing,” he said. “It feels free. It’s like, 'wow, I’m playing football but with no shoulder pads.’ …

“I always say football will be my favorite sport, but rugby was more fun.”

During the 2019-2020 Guam Rugby Football Union/IIAAG season, a successful campaign where the Sharks advanced to the championship game, Penaflor recalled starting the season on a low note. The Sharks, with several players from the disbanded John F. Kennedy High School Islanders joining their ranks, struggled in their season opener. That loss, to the Okkodo High School Bulldogs, and strong words of encouragement from the silver-and-black’s coaching staff, shaped the boys into a title contender.

“We lost our first game, and we were so mad about it,” Penaflor said. “Even our new players were mad about it.

“We decided to get our stuff together and focus on every game, one at a time. We didn’t look too far into the future. We didn’t say, ‘oh yeah, we’re going to go to the championship.’ …

After the Okkodo game, practices got tougher.

“Our coach burned us at practice,” Penaflor said. “We got it hard. Our coach punished us. We all kept in our mind, ‘coach is doing this for a reason.’ …

“We all made our mistakes during the game. We felt we deserved it. We just pushed through the pain that we had. … The only thing running on our mind was, ‘we’re going to do better than this game, every single game.’”

With so many possibilities robbed from him, Penaflor, who will turn 18 on July 12, remains upbeat and is living life with as much fervor and purpose as he demonstrated on the field. With his entire adult life ahead of him, he enlisted in the Guam Army National Guard in November 2019. Not letting the pandemic dictate his next move, he is also looking forward to reaching a milestone.

When Penaflor was younger, his peers and teachers told him that he wouldn’t amount to much and would become a high school dropout. The more they told him he couldn’t do it, the more he wanted to prove them wrong.

“Graduating is a very big thing to me because when I was younger, there were many people who told me that I couldn’t do it,” he said … “So, I used that as motivation. I decided to become a better person and focus on the good things in life.”

While high school seniors have had so much taken from them, the virus doesn’t get the last word, that belongs to Penaflor.

“Enjoy the little things, because that’s all that’s going to matter,” he said. “Life can hit you very unexpectedly. …

“Thank you to all my supporters out there. To everyone who never doubted me - to everyone that’s helped me through this long, crazy thing that we call life. I appreciate every one of you.”

Penaflor, waiting for his commencement garb to arrive, summed up the year.

“It sucked, but I enjoyed every single moment I had with everyone from school,” he said.

"Graduating is a very big thing to me because when I was younger, there were many people who told me that I couldn’t do it. So, I used that as motivation. I decided to become a better person and focus on the good things in life.”