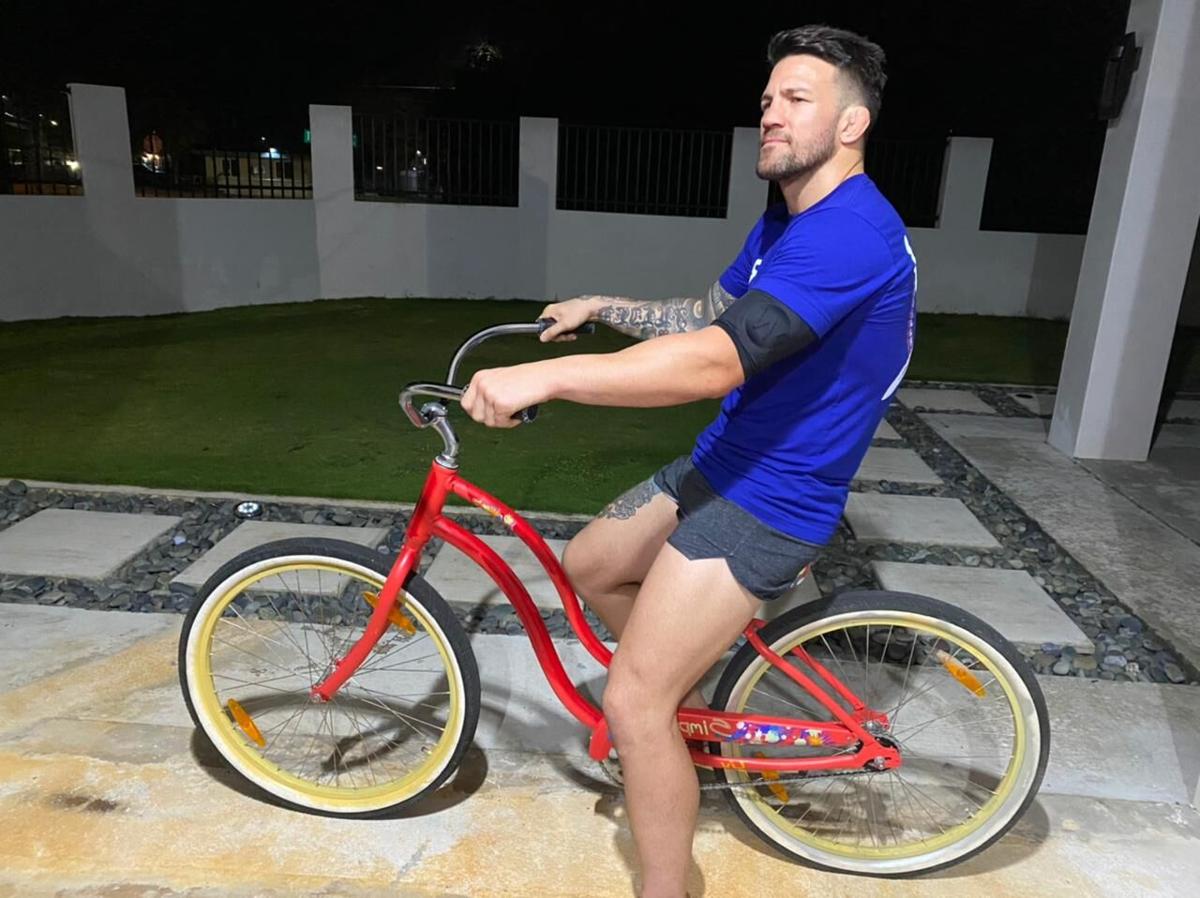 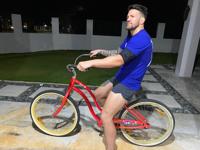 REUNITED: JJ Ambrose sits on his daughter's bike after he and his wife, Francesca, recovered it after it had been stolen. The bike, in its absence, appears to have been spray-painted a different color. Photo courtesy of JJ Ambrose 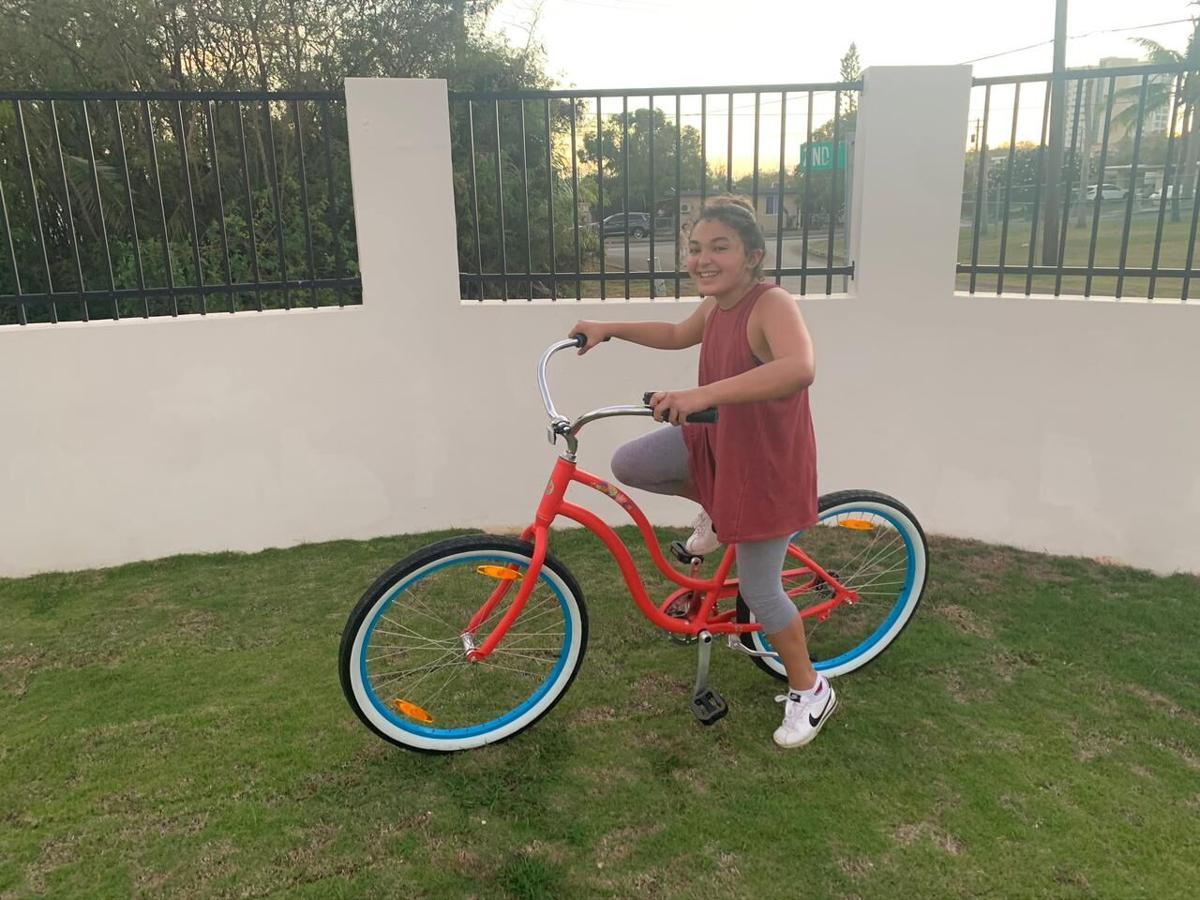 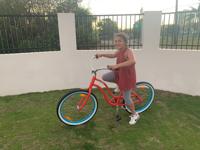 HAPPY ENDING: In this file photo, Juliet Ambrose, 11, sits on her beach cruiser. The bike was stolen from her family's house and later recovered. Photo courtesy of JJ Ambrose 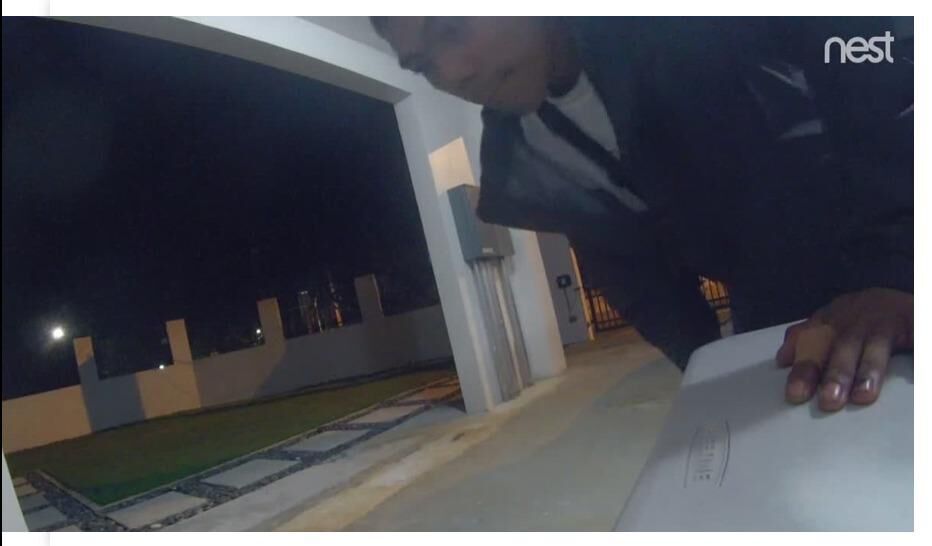 UNINVITED: In this Nest-cam photo, an alleged perpetrator is seen on the Ambrose property. Later that morning, JJ Ambrose discovered the camera and his daughter's bike had been stolen. Photo courtesy of JJ Ambrose

REUNITED: JJ Ambrose sits on his daughter's bike after he and his wife, Francesca, recovered it after it had been stolen. The bike, in its absence, appears to have been spray-painted a different color. Photo courtesy of JJ Ambrose

HAPPY ENDING: In this file photo, Juliet Ambrose, 11, sits on her beach cruiser. The bike was stolen from her family's house and later recovered. Photo courtesy of JJ Ambrose

UNINVITED: In this Nest-cam photo, an alleged perpetrator is seen on the Ambrose property. Later that morning, JJ Ambrose discovered the camera and his daughter's bike had been stolen. Photo courtesy of JJ Ambrose

It has been 14 months since JJ “Superman” Ambrose’s last professional mixed martial arts bout, but that doesn’t mean he is no longer fighting. As he waits for his next opportunity to materialize in One Fighting Championship, the Singapore-based promotion, he has been busy taking on a different opponent.

He has been busy fighting crime.

About two weeks ago, at 4 a.m., an alleged thief scaled the security wall onto his property and stole his daughter’s bicycle. Later that morning, oblivious that his family had been victimized, he walked outside the front door and noticed the bike was missing.

“We have a pretty high gate and we actually had it behind my wife’s car, so it wasn’t really visible from the street,” JJ Ambrose said. “Maybe someone had scoped it out. I’m not really sure. But they, basically, hopped our fence and they rode Juliet’s bike out.”

Later that evening, somebody contacted JJ Ambrose and told him that they thought they had spotted the bike at a gas station, the alleged thief having stopped to put air in the tires. Reportedly, the bystander snapped a photo with his phone and sent it to JJ Ambrose, but did not call the police. It was his daughter’s bike, but without any additional action, it disappeared, again. And JJ Ambrose felt deflated.

“I hope people would at least have the confidence to call the police or get help,” JJ Ambrose said. … “I feel like technology has done that to us. We whip out our phones and take a photo or video instead of responding, physically. That’s the general response."

JJ Ambrose told The Guam Daily Post that, later that morning, he posted a "missing bike" message on his Facebook wall and began searching for clues.

He had thought about posting a photo of the bike, but, so as not to tip off the perpetrator, he decided against it.

“I didn’t want to post Juliet’s bike ...  because I was hoping the people would put it up for sale,” he said. “I would just go meet them. I was trying to think of it from a thief’s point of view.”

As time passed and he was no closer to finding the bike, the hunt became an obsession.

“Nothing was turning up,” he said.

“I never thought this island was big enough for the bike to disappear. Anytime I am driving, I am constantly looking. I even drove down side streets,” he added.

Because his home security camera had captured the alleged thief’s image, he continued to scour the neighborhood for any sign of the perpetrator and, more-importantly, his daughter’s prize possession - a unique, brightly salmon-colored eye-turner with oversized, swooping handlebars, unmistakable decals, and an old-school bell. Just like the Ambroses' daughter, Juliet, 11, it was beautiful and vibrant.

“Man, this is such a loud bike,” said JJ Ambrose, adding that his daughter wears “pink everything."

Before he purchased the bike, it had caught his eye and he remembers telling himself, “‘This is the one.’”

JJ Ambrose filed a police report, but with each passing day, hope of ever seeing the bike began to fade.

On Thursday night, after driving home from his brother-in-law’s house, JJ Ambrose decided to check in on his gym, Steel Athletics. The detour took them further away from home, but he had insisted. After determining everything was OK and the gym was functioning as normal, at least as normal as possible during a pandemic, he hopped in the passenger seat and they drove away. Now, the baby was crying and they wanted to get home.

With his wife, Francesca, now in the driver’s seat, she thought she spotted something uniquely familiar. With a car filled with little ones, her eyes were glued to the road, but something so bright, so unmistakable, caught her attention so she hit the brakes, hard, and pulled over to the side of the road.

“‘We’re, literally, half a mile from home. Let’s just drive the rest of the way,’” JJ Ambrose remembering shouting to his wife, not because he was angry, but because their baby was doing her best job of shaking their nerves - and, it was working.

“‘J, I saw a beach cruiser. ‘I’m going to turn around. Don’t get mad at me if it’s not the right one,’” JJ Ambrose remembered his wife telling him above the high-pitched screeches, which had crescendoed into something more-resembling a frightened pterodactyl than an infant’s attention-seeking wail.

“‘No, I’m definitely game. You’ve got me all excited,’” he responded.

“She does a U-turn and we pull into Joy Market on Farenholdt,” he said. “There are three guys in front of the bike.”

“‘The bike looks more red now. ‘I don’t know that’s really it,’” he remembers thinking to himself.

“So, anyway, I have her pull up right in front of these guys and I hop out and I told her, ‘Turn your camera on, just in case,’” he said.

He said they "were definitely meth heads,” but “none of them were the guy that hopped my fence.”

“I would recognize the kid. He was a young CHamoru guy. … None of the three matched the video surveillance,” he said.

“So, I got closer and it’s definitely been spray-painted, and not a very good job of it,” he said. … “It was so obviously her bike.”

“‘Alright guys. So, this is my daughter’s bike. I’m going to take it,” he told them

“There was zero confrontation out of the whole thing. It was so funny,” he added.

With a car full of children and the bike much too large to fit inside the trunk, JJ Ambrose kissed his wife and kids goodbye and rode it the rest of the way home.

“I must have looked like a clown riding it home,” he said.

JJ Ambrose said that his daughter is “ecstatic” to have her bike back, but is not sure who is happier, she, or him.

“This is my dad-moment of the year.”

Now that the bike is safely home, JJ Ambrose said that “it’s not going to be outside again, that’s for sure.”

“Unless she’s on it, it won’t be outside,” he said, adding, “It definitely needs to get a paint job.”

While this story has a happy ending, the Ambroses feel violated.

JJ Ambrose said that the bike is replaceable, but is left with a “dirty feeling,” caused by a criminal “rummaging through our garage.”

“I didn’t like that at all,” he said, adding that he realizes because of the economic downturn more people are likely to turn to crime.

“It’s really desperate times. I see that. You see it in the papers,” he said. … “People are struggling. It’s unfortunate that they turn to crime to supplement.

“Hopefully, all this is over soon.”