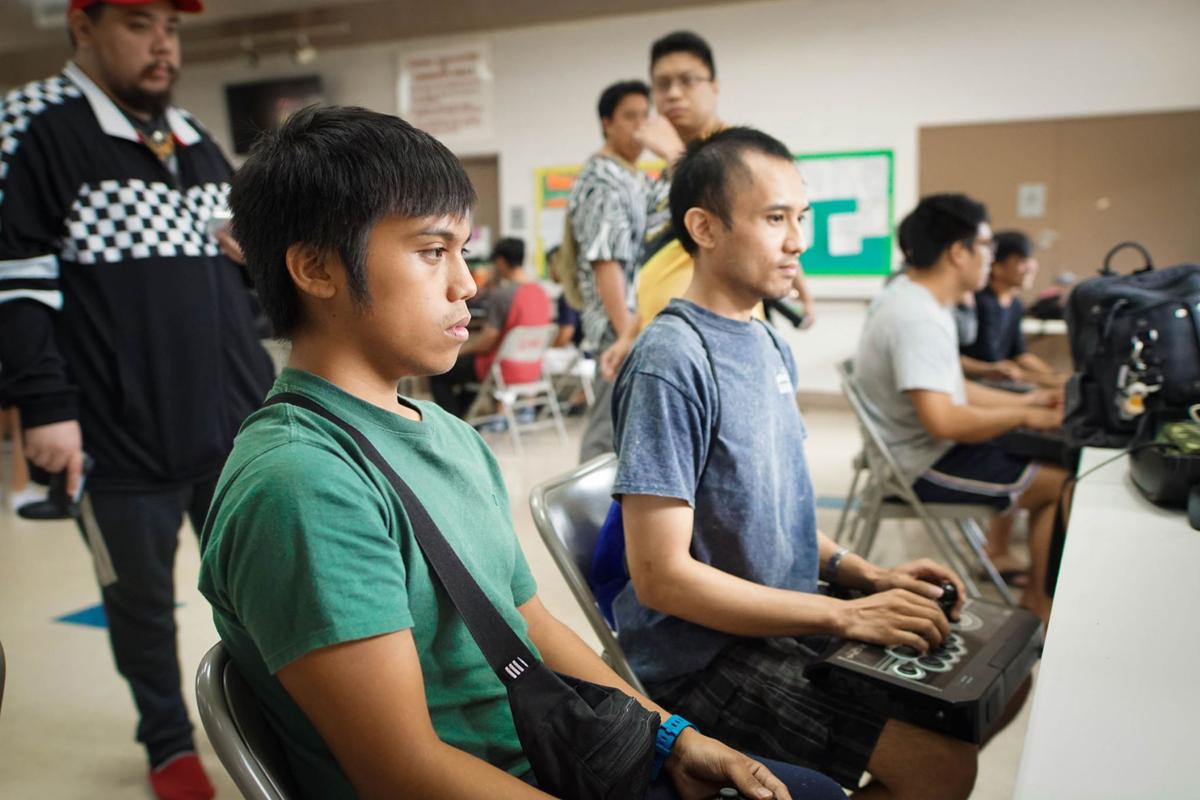 SPOOKY DATE: In this file photo, from left, Adrian Cabradilla and Warren Miranda play Street Fighter V during a tournament at the Dededo Senior Center. Cabradilla is one of Guam's most accomplished gamers and is coaching a UOG team during the upcoming Interscholastic Esports Series. Photo courtesy of Kai Rekdahl 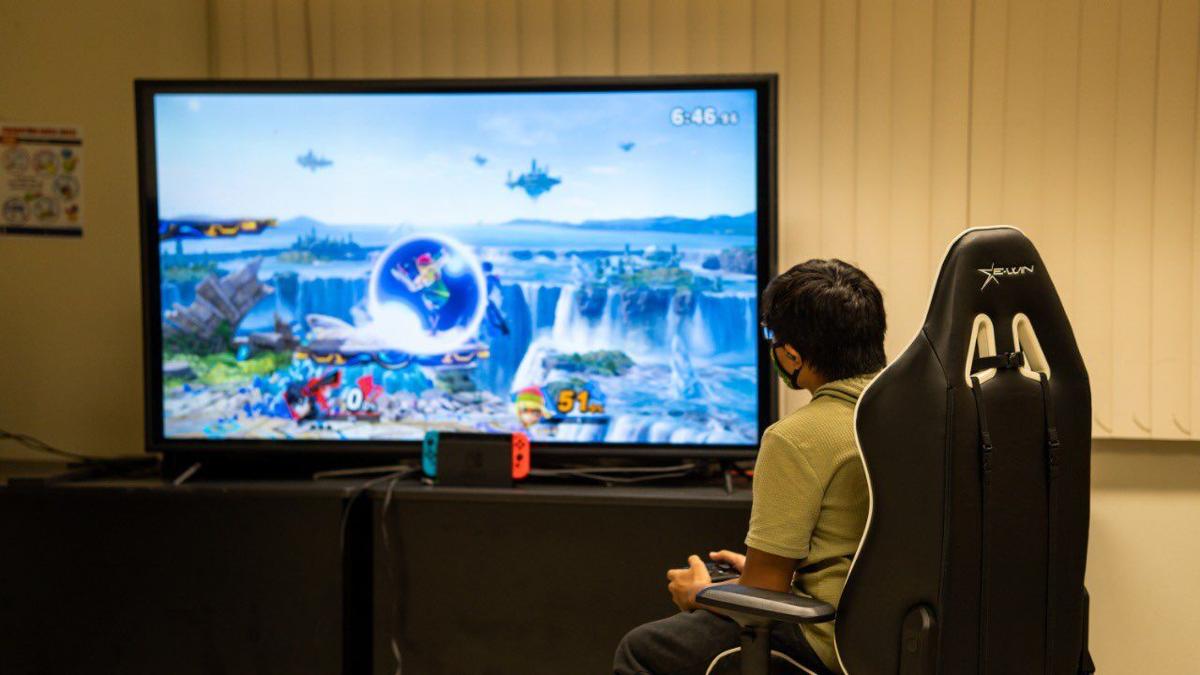 TRYOUTS: In this file photo taken in August, a University of Guam student tries out for the inaugural Triton esports team. The team has since established a roster and is practicing for an interscholastic tournament later this month. Photo courtesy of Ken San Nicolas 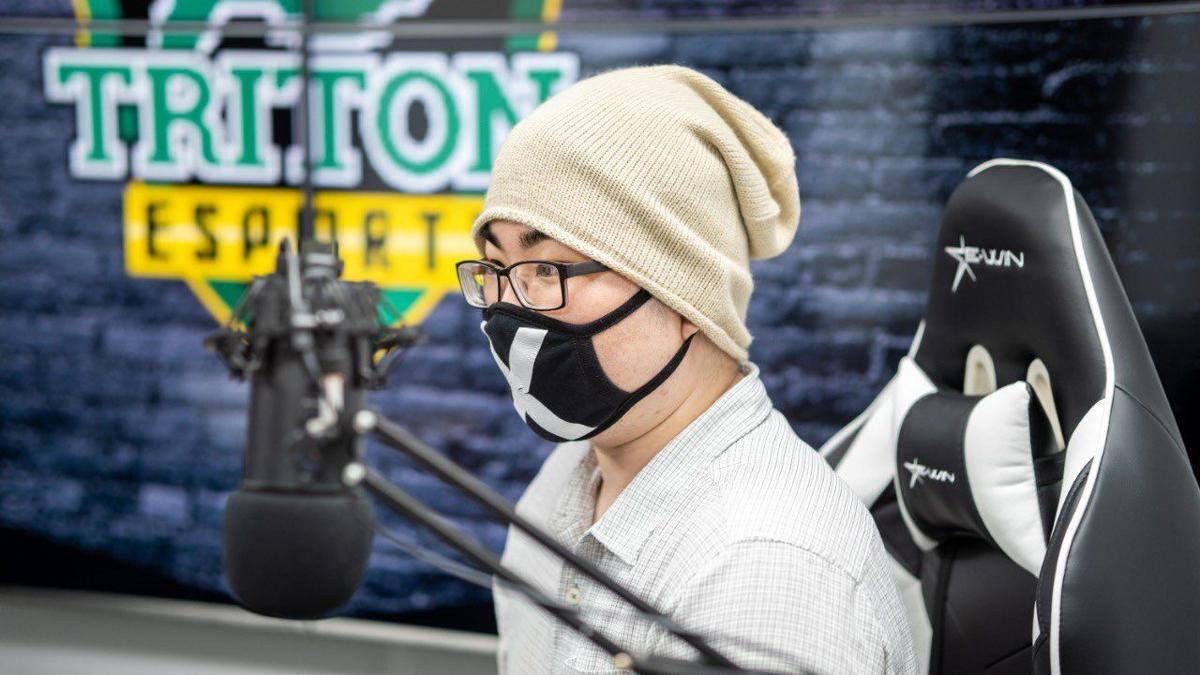 SPOOKY DATE: In this file photo, from left, Adrian Cabradilla and Warren Miranda play Street Fighter V during a tournament at the Dededo Senior Center. Cabradilla is one of Guam's most accomplished gamers and is coaching a UOG team during the upcoming Interscholastic Esports Series. Photo courtesy of Kai Rekdahl

TRYOUTS: In this file photo taken in August, a University of Guam student tries out for the inaugural Triton esports team. The team has since established a roster and is practicing for an interscholastic tournament later this month. Photo courtesy of Ken San Nicolas

For gamers, the difference between (virtual) life and (virtual) death, an exultant victory or a crushing defeat, could come down to a millisecond.

On Monday, Hyperion Servers, a product of Australian telecommunication company OneQode, announced they placed their game server hub on Guam, which they said would allow players in the Asia-Pacific-Oceania region to game on a level playing field, without one locale having milliseconds of advantage over the other.

“When you’re gaming online, there's a latency, or ‘lag,’ between when you press a button and when the server receives your input. Most of this latency comes down to the distance between you and the game server,” said Joe Swinn, spokesman for OneQode.

“Let’s say you're in Tokyo, and you're playing on a Sydney game server. You’re at a serious disadvantage against Australian players who are closer to the server so their signals are received earlier,” Swinn said. “When it comes to competitive gameplay, this lag means everything.”

Ken San Nicolas, Latte Esports League founder, likened high latency in gaming to competing in a sprint where one person has a one-second head start. They hear the starting pistol one second before the others.

The OneQode servers on Guam is a welcome development for esports players on island and in the region, according to San Nicolas.

“It’s good for various reasons. Number one, theoretically, players on Guam will have a lower ping,” San Nicolas said. “It’s also good for competition in the region.”

The Oceania Esports League announced Friday in a press release that they’ll host a Counter-Strike: Global Offensive tournament from May 19 through May 23. The tournament will be hosted on the newly-launched Hyperion OneQode Guam game servers.

Sixteen teams will be playing for a $17,500 prize pool and an inaugural championship title, according to the release.

The Hyperion/OneQode Guam servers will be helpful in the growing the local esports industry and there’s still more to be done, San Nicolas said.

“It’s a big first step,” San Nicolas said. “Any positive growth in the esports industry on Guam is good.”

“I urge people to not look at gaming as something that’s taboo but more something that can provide a positive future for the youth,” San Nicolas said.

Barry Hernandez, a longtime local gamer, said this is a great step forward for everyone.

“Having low server latency in games and in remote work would greatly benefit the island as a whole. Currently, a lot of gamers who play competitively in tournaments in Asia utilize software to lower their latency to some games that support it, which is not ideal,” Hernandez said.

“With OneQode launching a gaming hub here, we could see more Asia-based tournaments coming our way because we could be the link between Asia and Oceania. That alone could help our island get a larger foothold in esports,” Hernandez added.

A OneQode gaming server is definitely worth buying to expand their horizons to other games, Hernandez said.

"With esports garnering even more mainstream attention both globally and locally, it's great to see that there is a possibility for our local talent to thrive nationally. Our local gaming community has seen recognition in Asia in esports fighting games, but to have more popular esports being a possible avenue of growth would be exciting to see,” Hernandez said.

Guam, with a near equidistance location to countries in Asia and Oceania, is perfectly placed for a gaming hub, Swinn said. Plus, the island is connected by a vast network of submarine fiber optic cables and is well connected, he said.

Distance to a server impacts the “ping rate,” which is measured in milliseconds.

Both Swinn and San Nicolas said low-latency, or a low ping rate, works to a player’s advantage.

San Nicolas recalled a time when the Latte Esports League hosted a Valorant tournament on one server in Hong Kong.

Competitors had internet services from both Docomo and GTA. The different internet providers had servers in different parts of the world and players found the latency was different depending on what service provider the players had.

“Some of these guys, it’s a significant handicap and you can see that in their play,” he said. “They’re dying in situations when they normally wouldn’t have lost simply because they cannot react to something. They call it ping difference. They’re just behind, they’re playing the game behind.”

The possibilities are endless

“By putting our game server hub on Guam, players from surrounding countries will be able to connect at roughly equal latencies, so for the first time there’s a truly level playing field for the region’s gamers,” Swinn said. “Until now, intra-regional gaming has been out of reach, but Guam, being in the middle of the action, makes it possible. And that’s why we're so excited about this hub.”

OneQode’s Chief Product Officer Ben Cooper said in a statement he’d been working on the concept since 2016.

“The goal was to find a place with the best latency to as many people as possible. Much easier said than done - but thanks to the team alongside me at OneQode, our carrier partners and RTI Cable, Guam is finally ready to act as a gaming hub,” Cooper said in a press release.

Swinn said gaming drove the company’s decision to place servers on Guam but other businesses may benefit too.

“We’re also putting regular servers in our Guam data center, and we’ll soon make these available for rental,” he said. “For a Guam-based business, hosting your website on-shore could make a huge difference. It means faster loading times, and, if your website is important to your sales, a faster website experience translates to sales.”

Swinn said the company hired employees on Guam to look after the data centers, operations, networking and logistics and also worked with a number of businesses but weren’t able to disclose details because they signed a non-disclosure agreement.

OneQode also received messages from Guam gamers and businesses and was asked if they are bringing high-speed internet to the island, according to Swinn.

To that, he said, “Not yet, but we’re keeping our eyes open for the right opportunity.”

“With OneQode launching a gaming hub here, we could see more Asia-based tournaments coming our way because we could be the link between Asia and Oceania. That alone could help our island get a larger foothold in esports." Barry Hernandez, local gamer