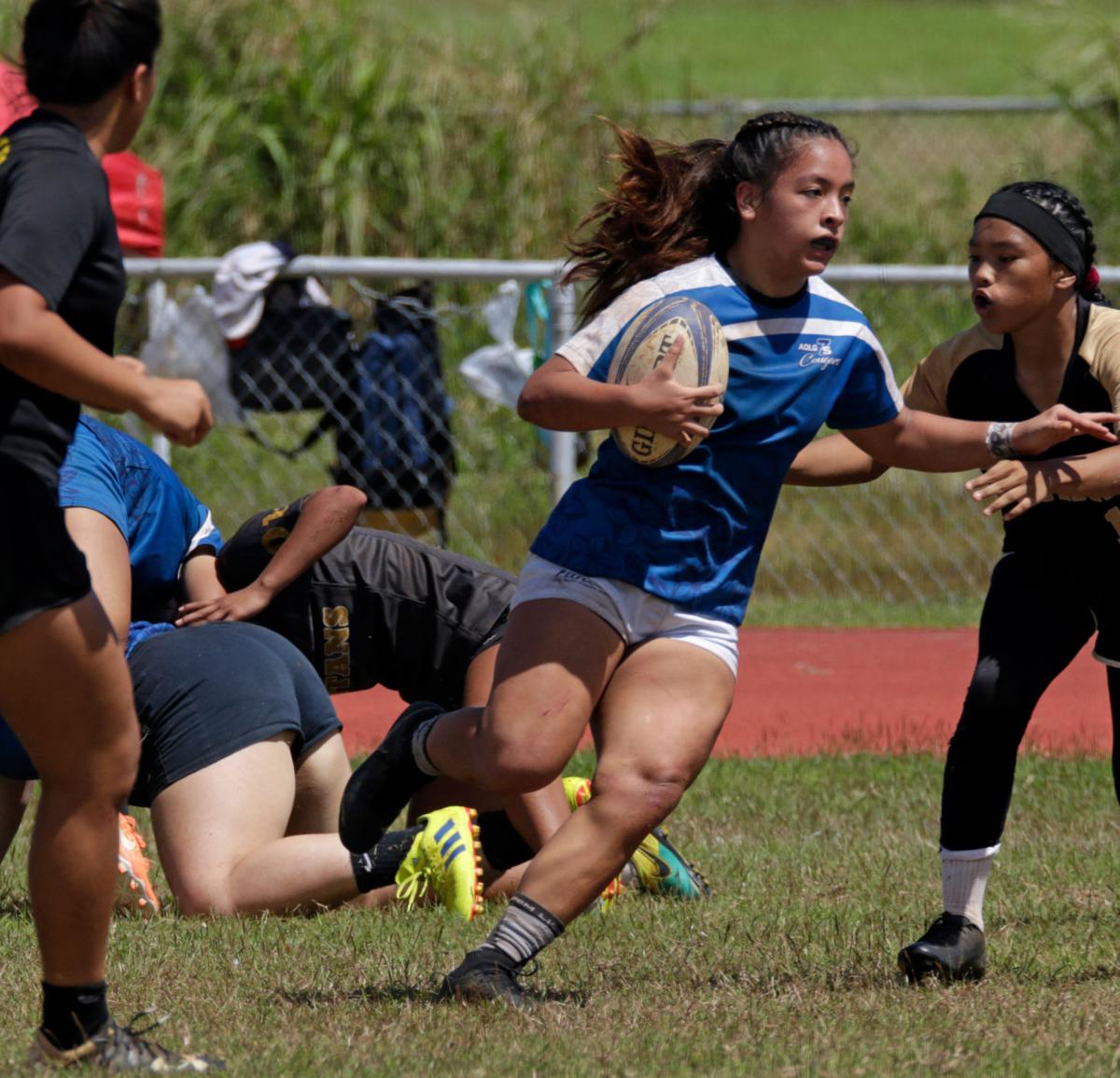 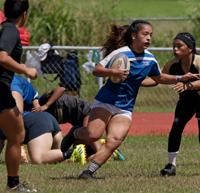 TRANSFERRED: In this Post file photo, then Academy of Our Lady of Guam Cougars' Makayla Atoigue keeps her feet as Tiyan defends their goal during a GRFU/ISA girls rugby game. Amid the coronavirus pandemic, Atoigue transferred to Notre Dame and will play her senior season for the Royals. Matt Weiss/The Guam Daily Post 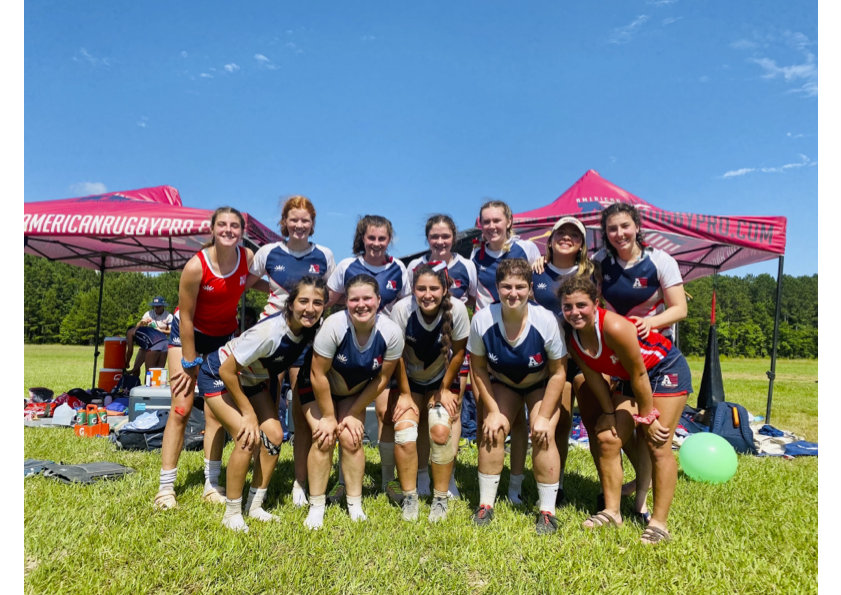 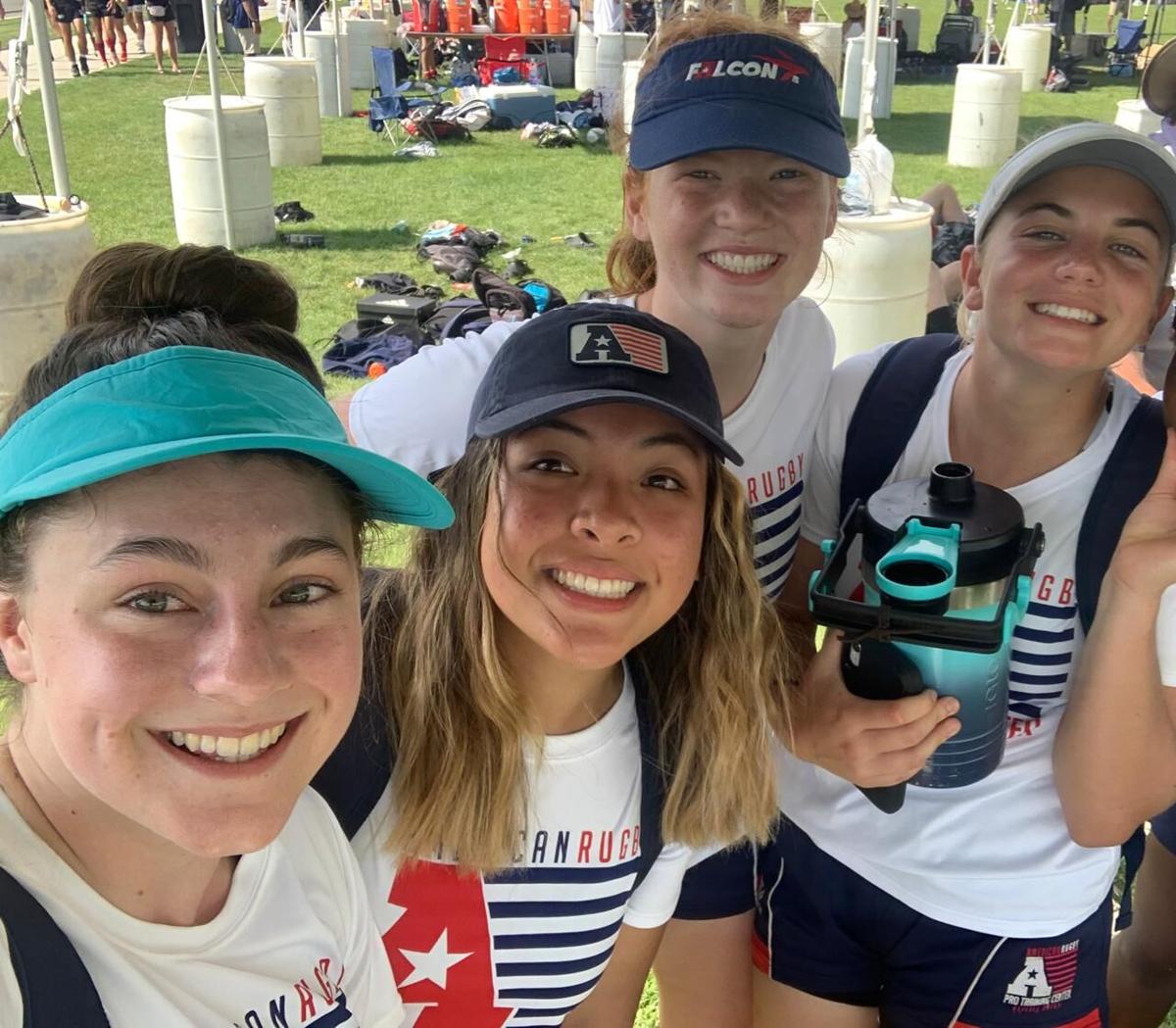 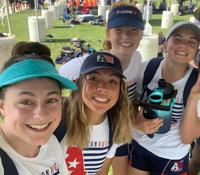 TRANSFERRED: In this Post file photo, then Academy of Our Lady of Guam Cougars' Makayla Atoigue keeps her feet as Tiyan defends their goal during a GRFU/ISA girls rugby game. Amid the coronavirus pandemic, Atoigue transferred to Notre Dame and will play her senior season for the Royals. Matt Weiss/The Guam Daily Post

Before Makayla Atoigue left the island in June to experience what rugby was like in the states, the 16-year-old Notre Dame High School student’s career was on pause. With all opportunity to compete on hold due to coronavirus restrictions, she was forced to make a decision: Ride it out and hope for the best, or leave the island.

After weighing the options, she boarded a flight for the American Rugby Pro Training Center in Little Rock, Arkansas, swapping her little rock for another.

“Having left the island - my mom and my sister for two months - on my own has been rough. but I know it had to be done,” Atoigue said. “There are so many opportunities out here in the states, and if I wanted to play at a higher level, I needed to leave the island.

“I don’t know if the pandemic has specifically helped me advance as a rugby player, but it has for sure taught me patience and perseverance, with dates always being 'To Be Determined' and nothing being certain for a while.”

When Atoigue met up with the team for a first time and participated in a two-week training camp featuring the highest level of rugby she had ever played, she was disappointed, not at at her teammates or coaching staff, but in herself. Since January, she had known about the opportunity, how big it was, and apparently psyched herself out. While playing on the U18 team in the Falcon 7s tournament, she was not at her best - she didn’t deliver.

“I left the first residency with some regrets after the tournament,” Atoigue said. “I rewatched some games and realized that if I was less scared and in my head, I could’ve executed harder. Not that I didn’t do good, but I know i’m capable of more.”

With Ivy League and other NCAA Division I coaches and recruiters scouting, she felt like she had missed out on a golden opportunity.

“I was bummed that I left on that note and that I didn’t empty the tank,” she said. “Falcon 7s was the only opportunity I secured to meet and show my skills to coaches.”

About two weeks after the Falcon 7s tournament, with what Atoigue thought was a sub-par tournament behind her, the young rugger opened her email to find a message from the ARTPC director. They wanted her back and offered her a spot on a 18 traveling team headed to the North American Invitational 7s Rugby Tournament in Salt Lake City, Utah.

With 128 teams participating in 14-to-23-year old age brackets, NAI7 attracts college recruiters from across the nation.

“With so many teams and so many coaches treating this tournament as the national youth championships, I jumped on a plane on July 11 to Arkansas to start training with a newly-formed team,” Atoigue said.

“My spot on this team means my future. I’ve been given a second chance to leave it all out on the field, which will help me accomplish my goal of playing collegiately.

“I’m beyond stoked to get on the pitch.”

At the time this article was published, after the first day of the two-day tournament, Atoigue’s ARTPC U18 squad placed second in Pool 1, two points behind top-ranked the Maui Wahine Warriors U18 Girls. In the 22-team bracket, ARTPC’s record is currently 2-1-0. In the three games played, they have outscored their opponents 88-38.

"I scored twice during the first game and we won both of those games by a large margin, she said. "We lost to Maui by one try and two conversions, but I am still proud of my effort. Maui was so strong. It was a great learning experience."

Looking out for her island

When Atoigue returns home for the 2021-2022 school year, the honor student is excited for the upcoming high school season, especially since the two-time defending champion Royals’ opportunity for the three-peat was taken from them when the season was canceled. And while she is eager to showcase her skills in Guam’s ultra-competitive rugby league, she is even more fired up to share what she has learned stateside - not just with her teammates, but anyone who will listen.

“I’d love to share everything i’ve learned to everyone willing to learn,” she beamed. “Training under former USA Rugby athletes and against the cream of the crop in the nation, I’d bring all rugby athletes from Guam to that level if I could.

"My time out here has brought me a new perspective in rugby, on both sides of the ball. I’m bringing everything back home.”