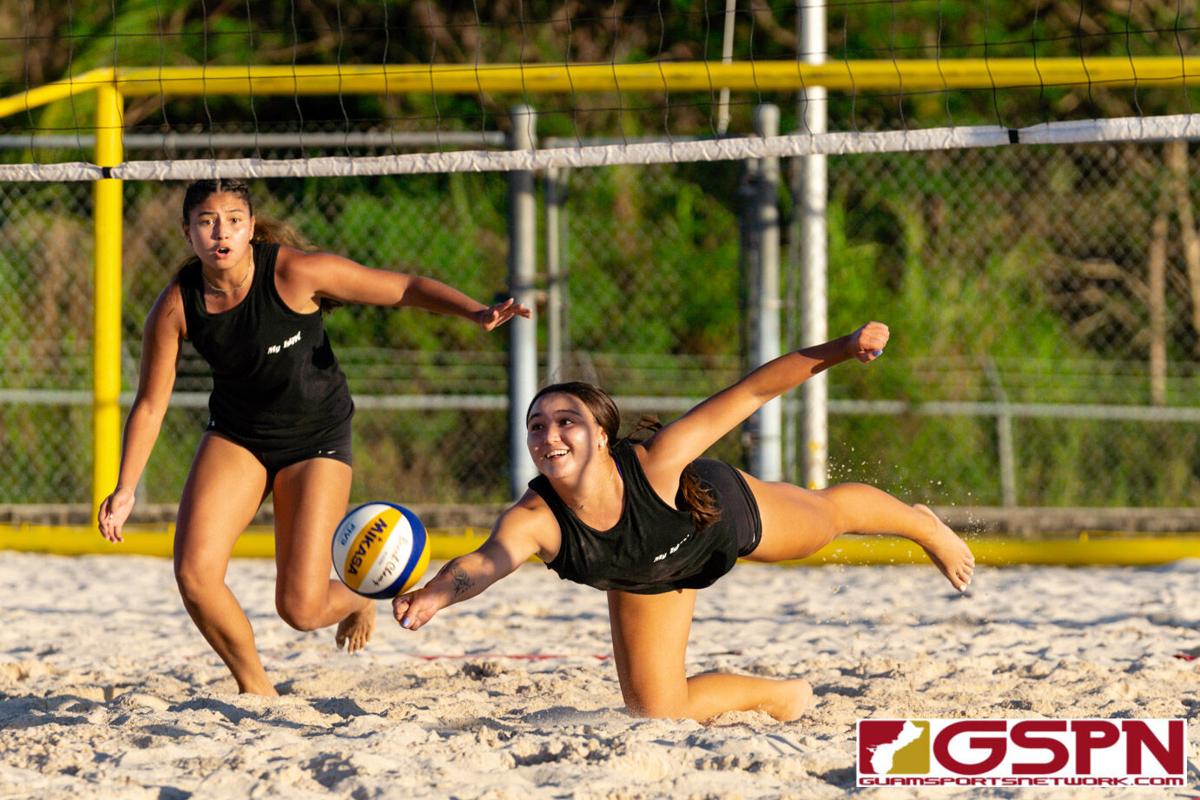 DIVING: The Knights' Tylee Shepherd dives after a ball as teammate Austia Mendiola rushes in to help during the IIAAG beach volleyball girls doubles championship match against the Cougars' Chloe Guerrero and Kristen Serrano on Saturday at GFA. Shepherd and Mendiola defeated Guerrero and Serrano 21-16, 21-10. Michael Blas/GSPN 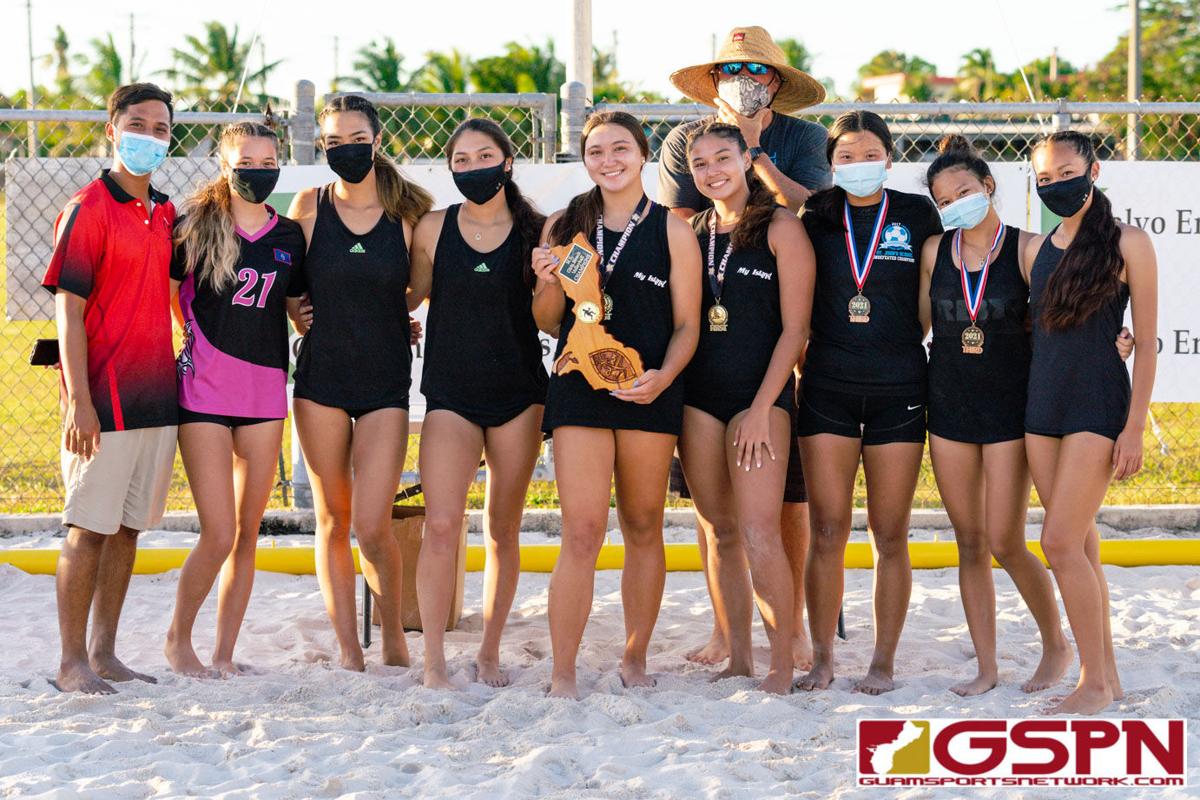 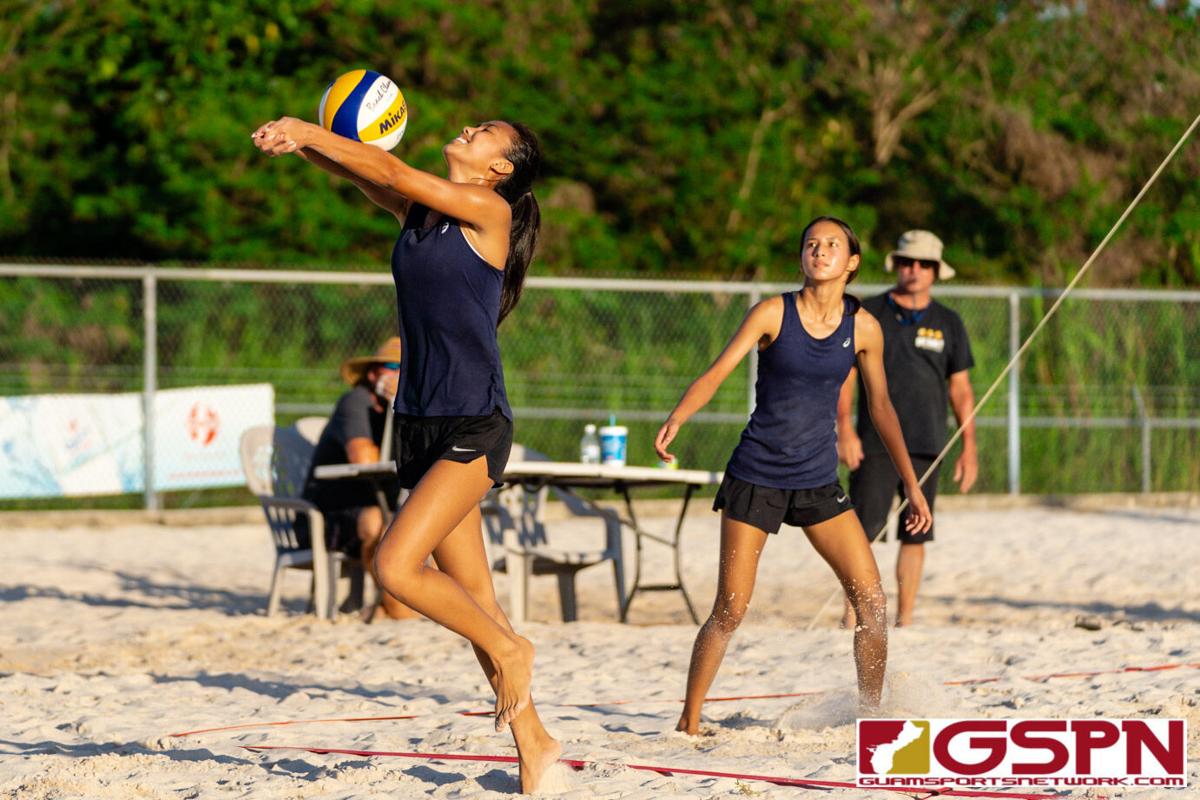 DIVING: The Knights' Tylee Shepherd dives after a ball as teammate Austia Mendiola rushes in to help during the IIAAG beach volleyball girls doubles championship match against the Cougars' Chloe Guerrero and Kristen Serrano on Saturday at GFA. Shepherd and Mendiola defeated Guerrero and Serrano 21-16, 21-10. Michael Blas/GSPN

Before the 2021 Independent Interscholastic Athletic Association of Guam beach volleyball season had begun, the Notre Dame High School Royals had decided not to enter a team, but granted the school's student-athletes the option of pairing up with players from other schools.

For the past few years, Notre Dame’s Austia “Tia” Mendiola had competed against St. John’s School Knights’ Tylee Shepherd. Respecting each other’s games, the two joined forces to become one of the most dominant teams in league history. And on Saturday, at the Guam Football Association National Training Center, the dynamic duo won the girls championship against the Academy of Our Lady of Guam Cougars’ Chloe Guerrero and Kristen Serrano 21-16, 21-10.

Not only did the win secure first place atop the podium, it avenged a regular season loss to Academy’s top tandem.

“After that first match, we would text each other and said: ‘Sorry for the poor performance,’” Shepherd said. “Every game we played since then has led to this moment, and we learned from those mistakes to perform better.”

From the opening serve, it was clear that Mendiola and Shepherd had been motivated by the loss and came out firing, working their way to a commanding 11-6 lead.

As the match progressed, a perfect Guerrero set ended in a thundering kill from Serrano. Although the Cougars had cut the deficit to 19-16, momentum favored Mendiola and Shepherd. Shepherd, with a side out and a serve that was too hot to handle, ended the set.

With one set in the books and just one more separating them from the championship trophy, Mendiola and Shepherd stayed aggressive from the service line and the net. Leading 8-3, they sensed victory.

Academy, with one last shining moment, a beautiful set from Guerrero, setting up a towering kill from Serrano, had both Mendiola and Shepherd diving, but the deficit was too vast to overcome.

With the small crowd favoring Mendiola and Shepherd, the dream team cruised through the match.

“Having the crowd cheer for us was great, but at the end of the day, me and Ty know that it’s just us,” Mendiola said. “We didn’t expect to have a crowd because of COVID, but it was still great to hear the hype from our teammates and friends.”

Despite the commanding victory, Mendiola and Shepherd respected their opponents.

“They improved so much from last season,” Shepherd said. “Their ball control, their hitting, communication, serves, every aspect of the game saw an improvement from last season.”

Shepherd said the Cougars did really well knowing when to send it over on a two, and when to do a pass-and-hit. "It shows their mentality and IQ of the sport excelled greatly.”

At the end of the match, team trophies were handed to the top three finishers. St. John’s, placing first, was awarded the coveted wooden championship trophy. Rounding out the podium, Academy placed second and Harvest finished third.

“We didn’t expect to have a crowd because of COVID, but it was still great to hear the hype from our teammates and friends.”