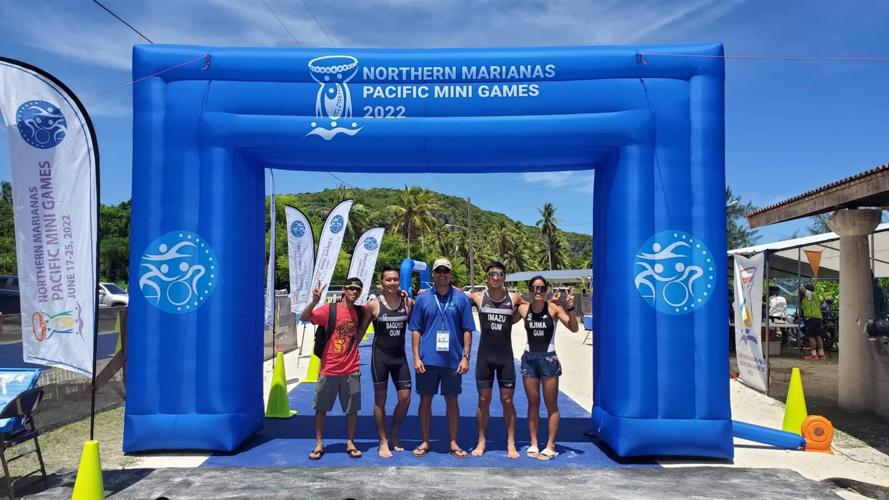 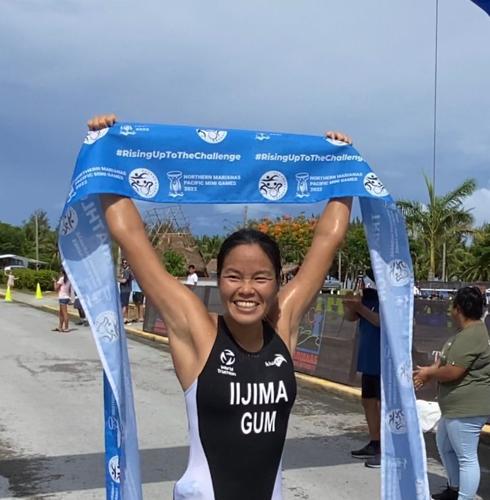 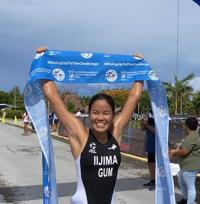 A GOLDEN FINISH: Manami Iijima-Martin won gold, finishing the sprint triathlon in 1:06:06 at the 2022 Pacific Mini Games Monday in Rota. She also earned gold in the aquathlon. Now, Guam's top triathlete is prepping to represent Guam in the half-marathon on Saturday. Photo courtesy of James Borja

A GOLDEN FINISH: Manami Iijima-Martin won gold, finishing the sprint triathlon in 1:06:06 at the 2022 Pacific Mini Games Monday in Rota. She also earned gold in the aquathlon. Now, Guam's top triathlete is prepping to represent Guam in the half-marathon on Saturday. Photo courtesy of James Borja

While the triathletes have two golds wrapped up and are ready to be on showcase, thanks to Manami Iijima-Martin’s inspired performance in Rota at the 2022 Pacific Mini Games, these athletic gifts of nature aren’t finished with their time in the Northern Mariana Islands.

Three of the triathletes – Iijima-Martin, Ryan Matienzo and Mark Imazu – are dual athletes and will be competing in a day or two in the arena of athletics. IIjima-Martin and Matienzo will both be joining the half-marathon on Saturday, while Imazu will be gearing up for the 1,500-meter race. Iijima-Martin picked up two golds – one in the triathlon and one in the aquathlon. The island’s top triathlete was phenomenal as she led the way on both events.

Looking back on their experience, Iijima-Martin and Matienzo said it’s been a fantastic one thus far.

Iijima-Martin said the race conditions were perfect for the aquathlon, thanks to a few showers prior to start time.

Iijima-Martin said her game plan was to run hard from the start.

With three events in a week, Iijima-Martin said it’s definitely been a little different as far as recovery.

“My recovery has been OK. I've never done back-to-back-to-back races, so it's been a challenge,” she said. “My resting heart rate is elevated and sleep is impacted from nerves. But it's all part of the game.”

Regardless, she said, her mindset going into the half-marathon is to give it her best and have fun.

Matienzo said he was disappointed with his overall result because he didn’t hit the time he wanted. However, Matienzo was fantastic, finishing sixth overall in the triathlon. He didn’t compete in the aquathlon.

Despite his finishing time, Matienzo said he’s happy with the experience overall, adding the experience was unmatched and only whetted his appetite for more racing.

Meeting the younger athletes who are starting to find their way in the sport was another bonus, he said.

He laughed as he described his game plan with his training partner.

The goal was to chase on the bike and the run – their stronger disciplines – and save energy on the swim.

But, the plan didn’t work, he said ruefully, adding he actually felt slower than normal on the chase.

Yes, running is my strongest of the three disciplines. But, this time, my run was not as fast that I was expecting,” he said, adding that maybe the heat could have been a factor, but he plans to do better next time. Despite his criticism of his race, Matienzo was able to chase down nine competitors on the bike and the run, which bodes well for him in future competitions.

Now, he said, he’s just glad the race is over and he has two days to prep for the half-marathon.

“Had a good run this morning before we left Rota,” Matienzo said. “The mindset for any race is to be patient at the start and stick to the game plan. … Not to go too hard in the beginning of the race.”

Imazu, the island’s youngest triathlon representative, said he was happy with his first foray into international racing.

“I did really good. It was a super fun and cool race to have as my first international triathlon race, there was nothing to be taken for granted,” he said.

Looking at the 1,500m race ahead of him, Imazu said his goal is to give it everything he has left.

Focused on relaxing and recovery, Imazu outlined his game plan to shoot for a personal best.

“I plan to pace out the laps and go hard on the last few to help me reach potentially for a personal best,” he said.

All three of the triathletes said they are grateful to have such a strong support network and thanked Luta for welcoming them with open arms.

Iijima-Martin thanked everyone – supporters, family, friends, Games volunteers, organizers and Guam – for being along for the journey and cheering on Team Guam despite the miles apart.

“The food is great! The mayor of Rota held a fiesta for all the triathletes and it was amazing!,” said the self-proclaimed foodie. “I’d never had coconut crab, lobster, parrotfish, titiyas right after an event, so it was amazing!”

“Rota was a super beautiful island and I just love how clean the roads are for the race,” Imazu said.

Matienzo echoed his thanks to Luta for the hospitality and extending the “Hafa Adai” spirit to the athletes.

“Rota is always the best place for experience; the people there are always so awesome,” he said. “This is actually my second time in Rota, but this time was more memorable and we were able to go around more and see more of the tourist spots.”

The island’s weightlifting team wrapped up its last competitor Thursday at Marianas High School in the 2022 Pacific Mini Games in Susupe, Saipan.